She is known for keeping her fans updated about her personal life through her social media outlets.

And on Sunday, Kim Kardashian shared several videos that had been taken during a morning excursion to a golf course on her Instagram Story.

The 40-year-old reality television personality appeared to be making the most of the sunny springtime weather as she hit a few balls while being accompanied by her pal La La Anthony, 38, who remained off-camera for much of the outing. 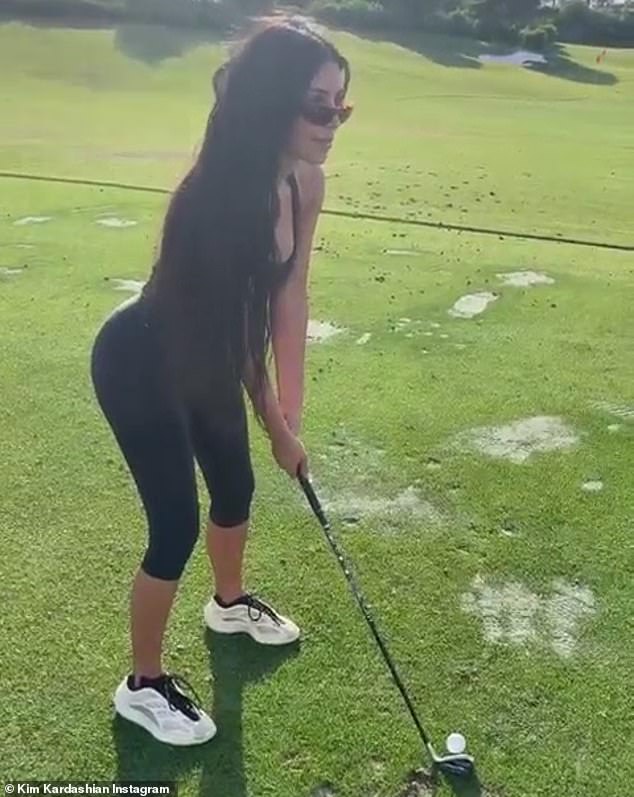 Enjoying the sunshine: Kim Kardashian shared a few videos that showed her playing golf with La La Anthony to her Instagram Story on Sunday

Kardashian cut a very sporty figure during the golfing excursion, as she wore a black athletic one-piece that accentuated her toned midriff.

The top portion of her outfit served to complement its bottom portion, which clung tightly to her impressively sculpted hips and reached the area just below her kneecaps.

The social media powerhouse contrasted her clothing items with a pair of white golfing shoes and wore dark sunglasses while enjoying the balmy weather.

Her gorgeous brunette hair fell onto her shoulders and reached down to just below her elbows while she whacked a few balls around. 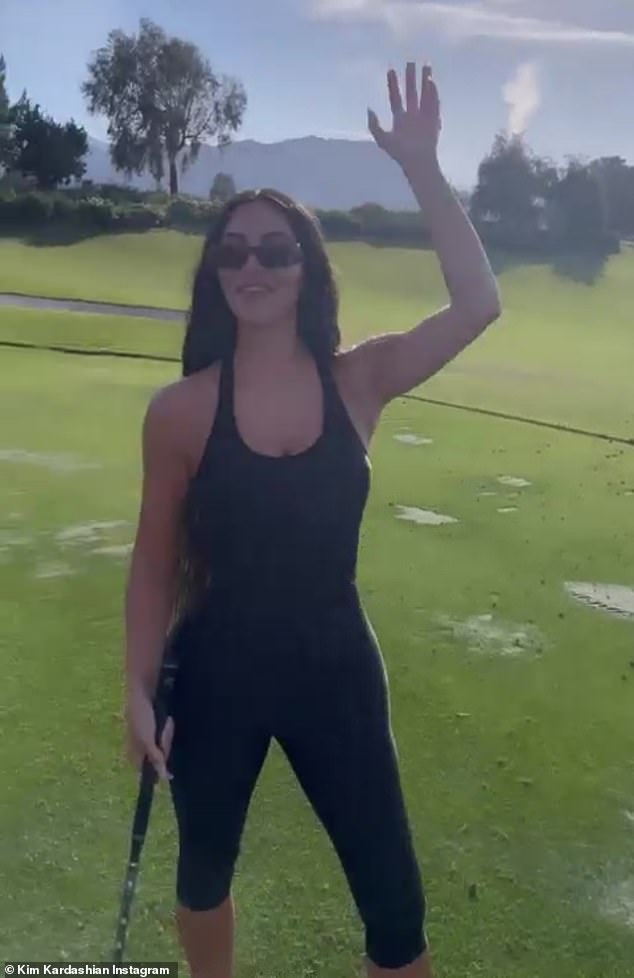 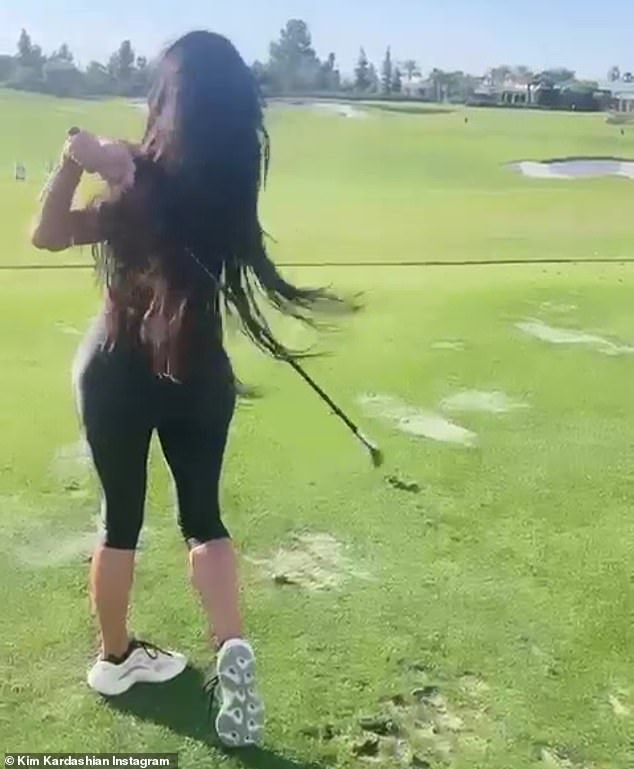 Serious player: During one of the videos, La La was heard hyping up her friend and expressing that she was ‘ready to show us how it’s done’

The Skims founder also included a shot of a custom-made bag that featured her name embroidered on its side.

During a few of the videos, Kent could be heard hyping up her pal, and at one point, remarked that Kardashian was ‘ready to show us how it’s done.’

After the reality television star hit a ball far out into the course, her pal expressed that she was ‘glad I put money on that one,’ to which her friend noted that she had made a ‘hole in one.’

The social media figure also shared a shot of La La trying her hand at the sport, although she did not capture her 30-year-old friend’s efforts in a video.

The media figure wore a similar all-black clothing ensemble during the golfing trip and added an element of contrast to her outfit with a pair of multicolored Nike sneakers. 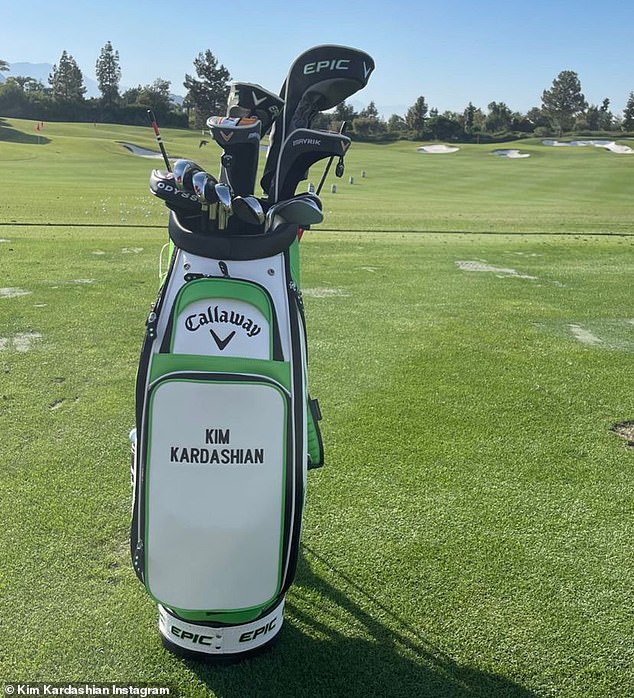 Custom carrier: Kardashian also shared a shot of a golf bag that featured her name embroidered on its side 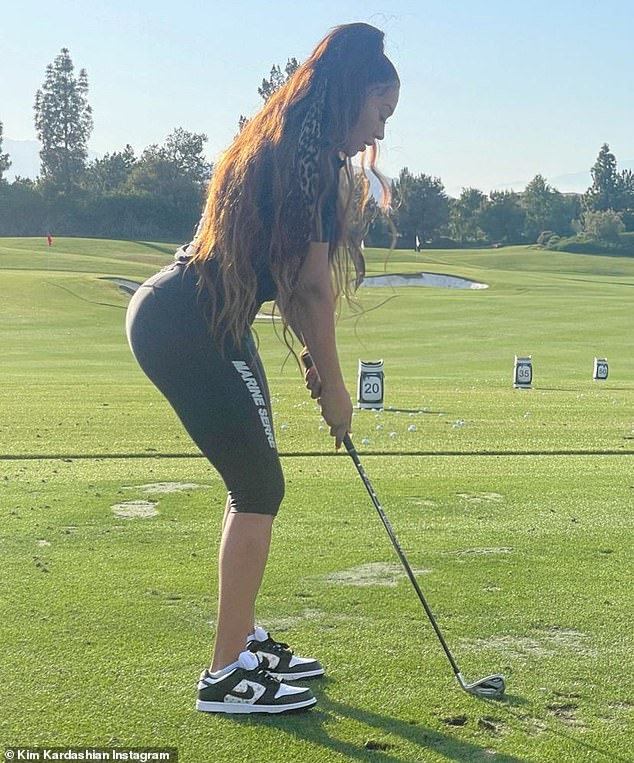 Getting in on the fun: La La also stepped up to hit a couple of balls, and she was featured in a photo taken by her friend