Kylie Jenner showed off another statement look on Friday night as she headed to dinner with pals.

Not much of her outfit underneath could be seen but the mother-of-one appeared to be wearing white leggings or a catsuit. 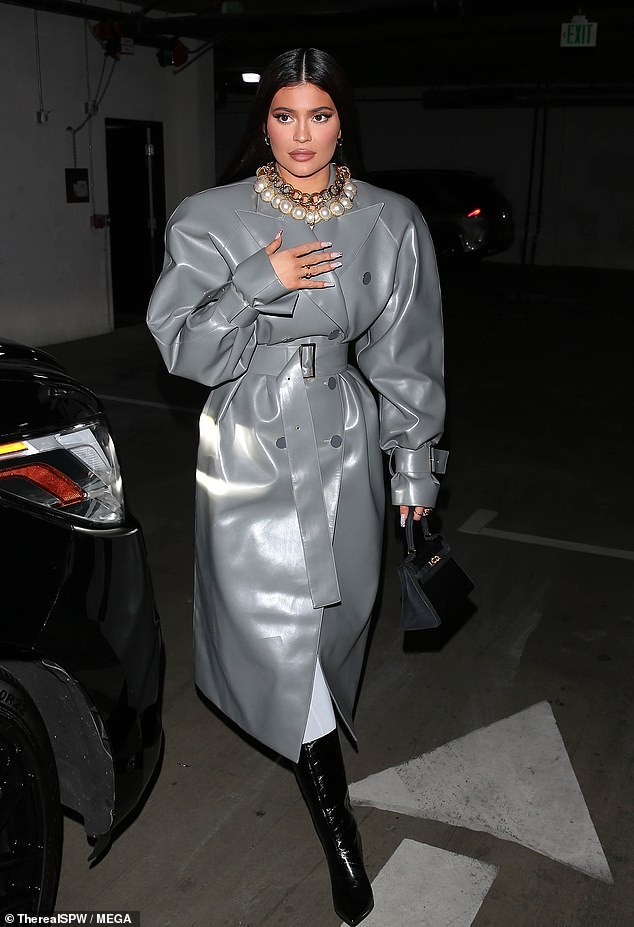 Fashionista: Kylie Jenner made a style statement on Friday night as she stepped out in Beverly Hills in a vinyl trench and pearl necklace

She accessorized the look with a massive gold chain with pearl necklace.

Kylie’s makeup looked flawless with a soft bronze glow and pink pout and her raven locks were styled sleek and straight in a center part.

During the day the mother-of-one shared some photos of a delicious looking sushi-feast she enjoyed.

Talk of the town: Kylie’s makeup looked flawless with a soft bronze glow and pink pout and her raven locks were styled sleek and straight in a center part 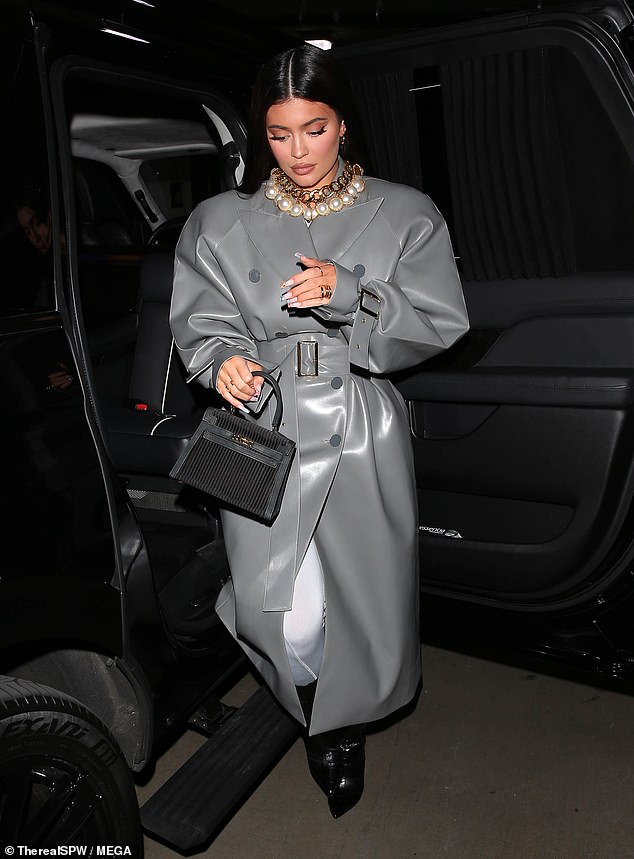 Glam: Not much of her outfit underneath could be seen but the mother-of-one appeared to be wearing white leggings or a catsuit 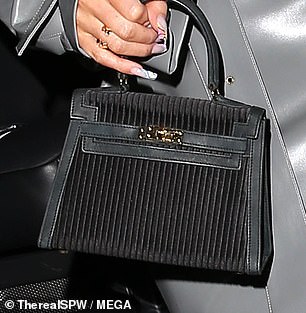 ‘Wow’ Kylie captioned a snap of a plate of some sashimi, and some spicy tuna crispy rice.

The LipKit mogul also showed off plates of sushi.

Kylie recently confessed she craved bread when she was pregnant with daughter Stormi.

The reality star welcomed her daughter into the world three years ago and has now revealed she spent most of her time in labor desperate for a specific style of bread sold at West Hollywood-based restaurant, Craig’s.

Earlier this year Kylie visited the establishment with father Caitlyn Jenner, and took to her Instagram Story to show off a basket of the freshly baked dough.

In the clip, she said: ‘Fun fact, Craig’s in LA has the best bread of all time, specifically this one.

‘This is what I craved my whole labor and it’s the first thing I had right after I gave birth to Stormi.’

Making an entrance: During her night out, the reality star shared clips to Instagram including one of her getting in an elevator at her destination 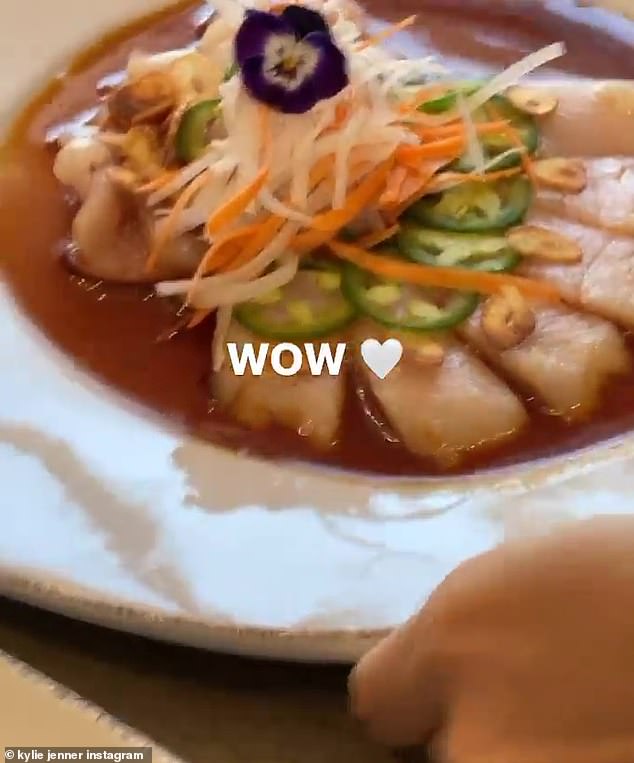 Wow: Earlier in the day the makeup mogul showed off a sushi feast she enjoyed

Back in 2018, the star posted a video montage to celebrate the arrival of her daughter – whom she has with Travis Scott – where she shared never-before-seen moments from her pregnancy, including some clips which detailed other cravings she’d been indulging in.

While at a doctor’s appointment to check up on her health, Kylie had revealed: ‘It’s just In-N-Out these days literally tastes like … It’s the best I’ve ever had.’

But her doctor was unimpressed with her unhealthy cravings, and told her: ‘Can I tell you something? Never eat In-N-Out.’ 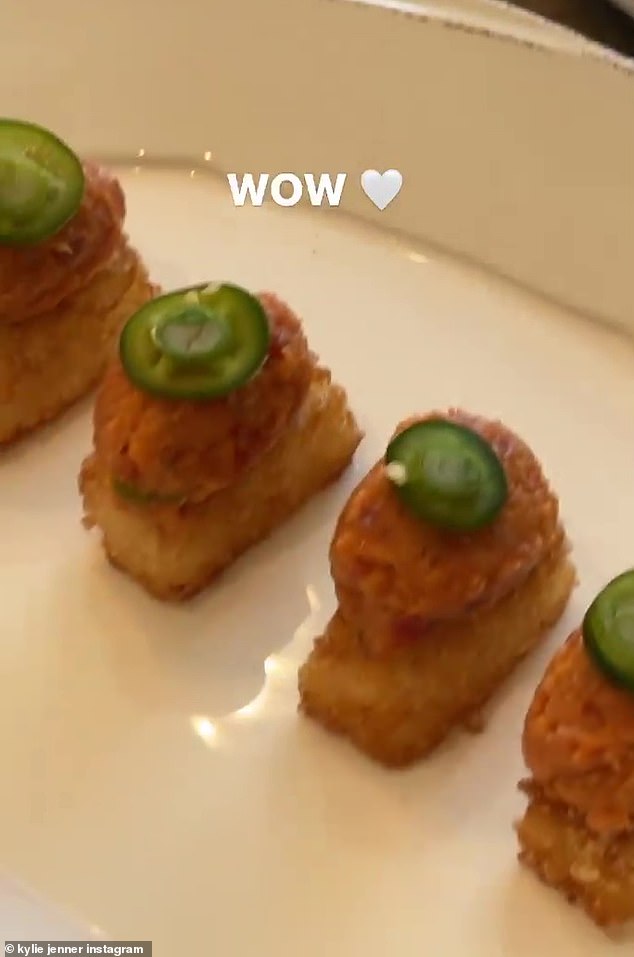 Yum: The star showed off a plate of spicy tuna crispy rice 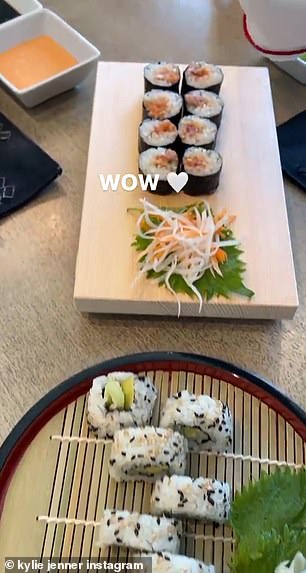 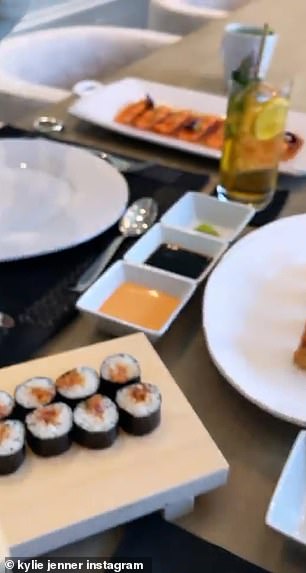 At your service: It looked like Kylie was at home as she enjoyed the food likely whipped up by a personal chef

That same year, the Kylie Cosmetics founder also admitted she had cravings for Eggos waffles, and was disappointed she couldn’t eat sushi whilst pregnant.

In a Twitter Q&A the star was asked what the worst part of her pregnancy was, and she replied: ‘There really was no worst part! Probably not being able to eat sushi lol. I had such a perfect experience. She moved a lot. (sic)’

And in another tweet after being asked about her cravings, she said: ‘Eggos!!! I never liked them before I was pregnant & haven’t had one since I had her. So strange! Lol (sic)’ 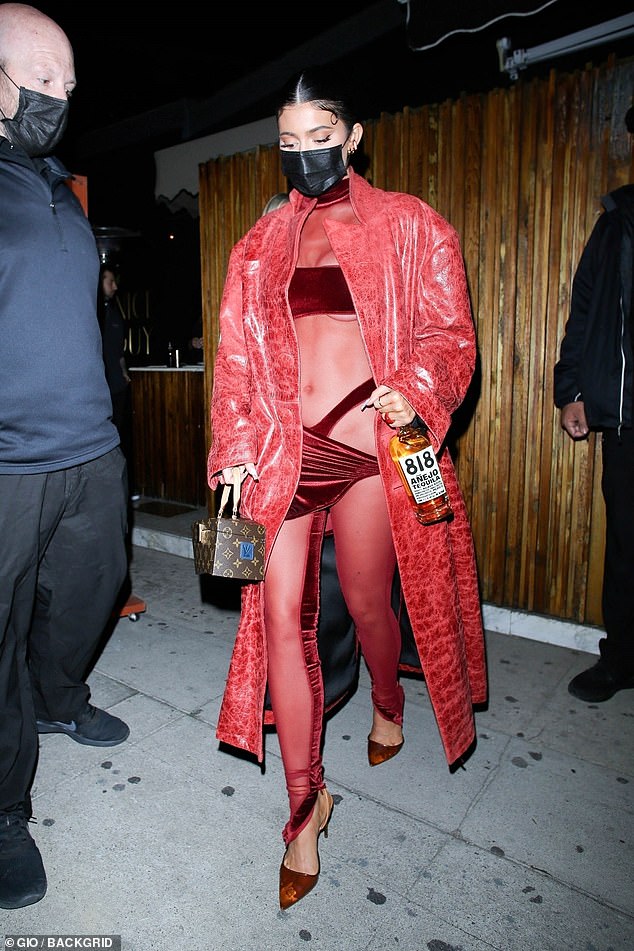 Red alert: The 23-year-old showed off another striking look as she stepped out for Justin Bieber’s album release party at the Nice Guy on Thursday night