Lady Gaga has bleached her eyebrows.

The Poker Face singer showed off the new look in an Instagram photo posted on Wednesday evening when she was going out for sushi.

This comes days after the A Star Is Born actress posted an image with her new beau Michael Polansky, a tech CEO who works for Napster co-founder and former Facebook president Sean Parker. 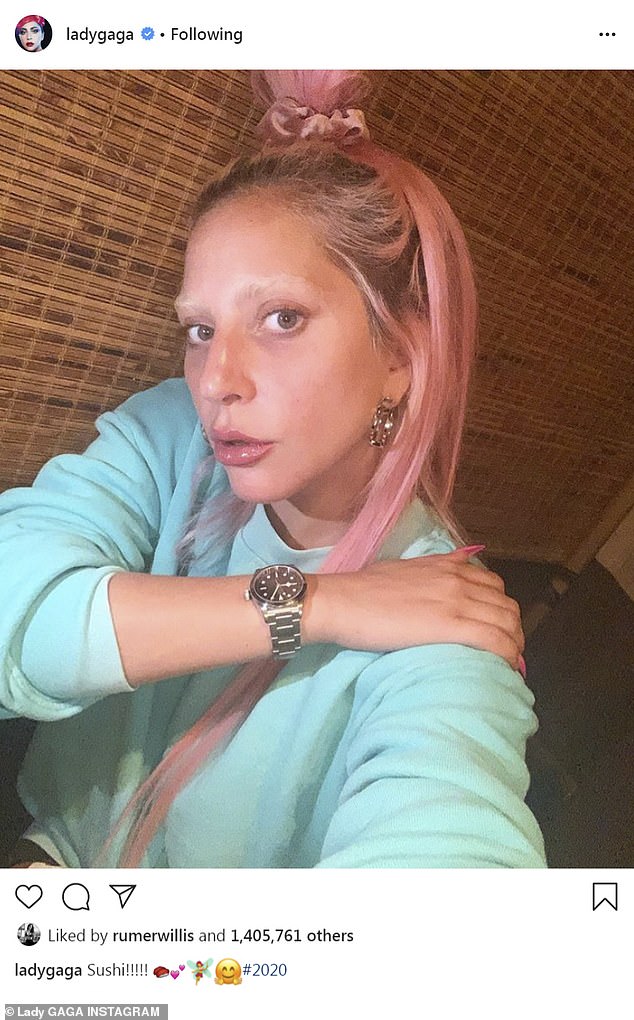 New for 2020: Lady Gaga has bleached her eyebrows. The Poker Face singer showed off the new look in an Instagram photo posted on Wednesday evening when she was going out for sushi

In the Wednesday image the crooner had on light makeup with her pink hair pulled up partially in a knot.

Gaga also wore a turquoise sweatshirt with earrings and what appeared to be a man’s watch.

She just went public with Michael on Sunday at Super Bowl LIV in Miami after dating since early December.

And on Monday the 33-year-old Shallows singer went Instagram official as she shared a very intimate photo to her nearly 40M followers on Instagram where she looked overjoyed with the tech CEO while on a yacht in Florida.

The beauty was in a netted black top over a blue bikini as she was wrapped in the arms of her swarthy fellow who stared at her while she looked at the ocean. 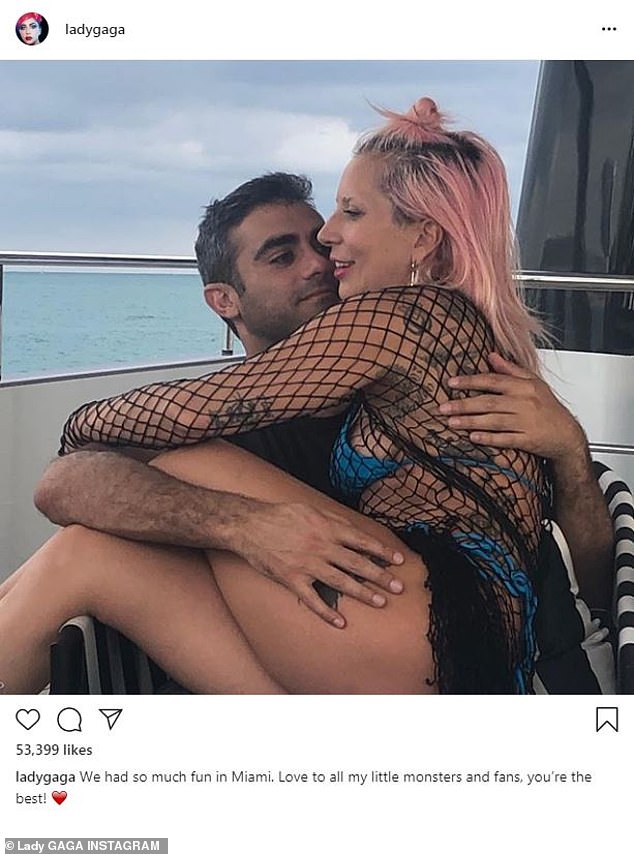 A new love: Lady Gaga is certainly not hiding her love for new beau Michael Polansky, whom she just went public with on Sunday at Super Bowl LIV in Miami. On Monday the 33-year-old singer shared a very intimate photo to Instagram where she looked overjoyed with the CEO

The image she chose was radiant as she looked full of bliss while with her new love interest.

Gaga smiled away as she wore red lipstick and had her pink hair partially pulled back. Michael had one of his hands on her back and the other strategically placed over her bare left thigh.

‘We had so much fun in Miami. Love to all my little monsters and fans, you’re the best!’ wrote the A Star Is Born actress in her caption, adding a red heart.

The singer and her handsome partner wrapped their arms around each other as they left the stadium in their first public outing as a couple. 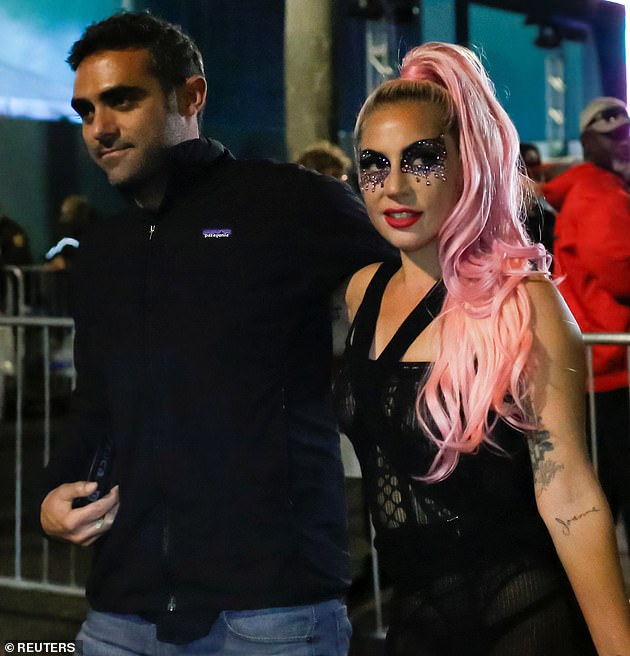 Gaga cut a stylish figure for the evening, donning a black sleeveless dress with large straps while she styled her pink locks into a dramatic ponytail.

The hitmaker drew further attention to her look with dramatic purple eye shadow while she also added a sequined detail.

Michael kept it casual for the evening in a black hoodie and a pair of blue jeans as he cosied up to Gaga, who he reportedly first connected with in early December.

Gaga, who broke up with ex-fiance Christian Carino, 51, a year ago, was first seen publicly with Michael as they rang in 2020 together during her residency at the Park MGM in Las Vegas.

It is now understood that they connected earlier in December at Silicon Valley entrepreneur turned philanthropist Parker’s birthday party at his home in Los Angeles.

A source told the publication: ‘Michael is a really smart guy, a very serious guy, who has always been low key.

‘People are saying Gaga would have met him through events Sean Parker has hosted at his house, including the launch and other events for the foundation. Sean also had a party for his birthday in LA in December and both Gaga and Michael were there.’

It comes after Michael was seen enjoying Gaga’s pre-Super Bowl show on Saturday where he hung out with the singer’s mother Cynthia Germanotta. 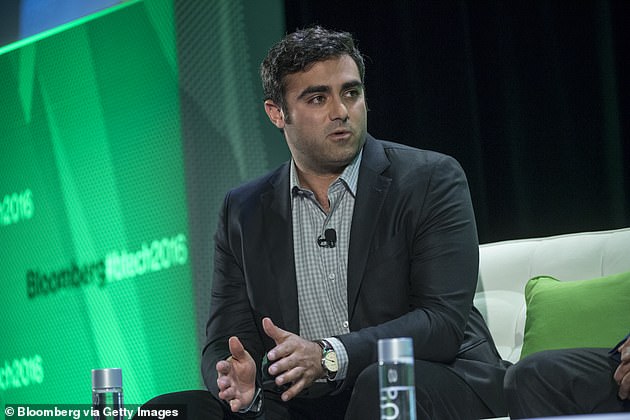 At work: Michael is seen in 2016, speaking in his role as director of Parker Media during a tech conference in San Francisco 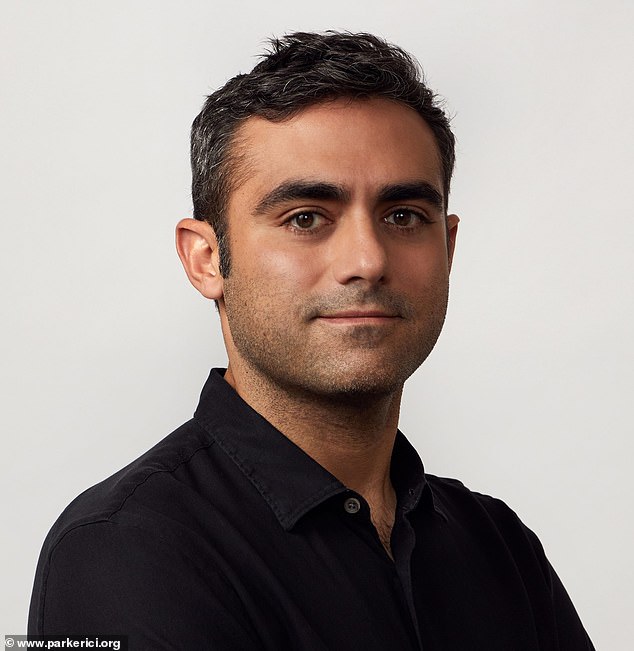 Michael and Cynthia were seen enjoying a drink together during the Poker Face star’s showstopping performance.

Gaga and her new beau were also seen kissing on a hotel balcony in Miami over the weekend, with an insider claiming the singer is ‘crazy’ about Michael.

According to Michael’s Linkedin bio, after working on various startups, he co-founded Sean Parker’s The Parker Foundation ten years ago, and now acts as executive director. For the same time has been CEO of The Parker Group.

Among his other roles for the group is working as co-founder and board member for the Parker Institute for Cancer Immunotherapy, which works to build collaboration between researchers, nonprofits and industry with the aim of getting new cancer treatments to patients faster. 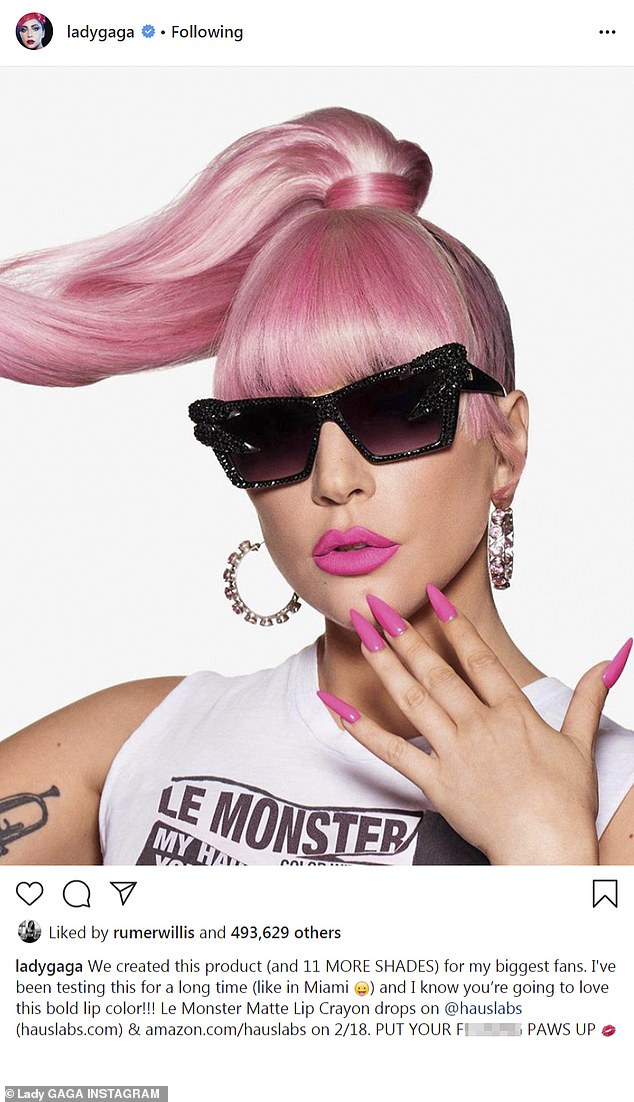 Makeup queen: On Thursday she shared this image and said, ‘We created this product (and 11 MORE SHADES) for my biggest fans. I’ve been testing this for a long time (like in Miami) and I know you’re going to love this bold lip color!!!’

Gaga was romantically linked to audio engineer Dan Horton over the summer, but she confirmed in October that she was single.

Previously, she was engaged to actor Taylor Kinney, with the two splitting after five years in 2016.

The two joined forces for the half time show at Super Bowl 54 at the Hard Rock Stadium.

Moments after delivering the sharp comment as she sat by the piano, she told the audience: ‘I love you Miami. I love you J Lo. I love you Shakira.’

Later she gave the performance a big thumbs up by calling Shakira and Jennifer ‘sexy’ women. 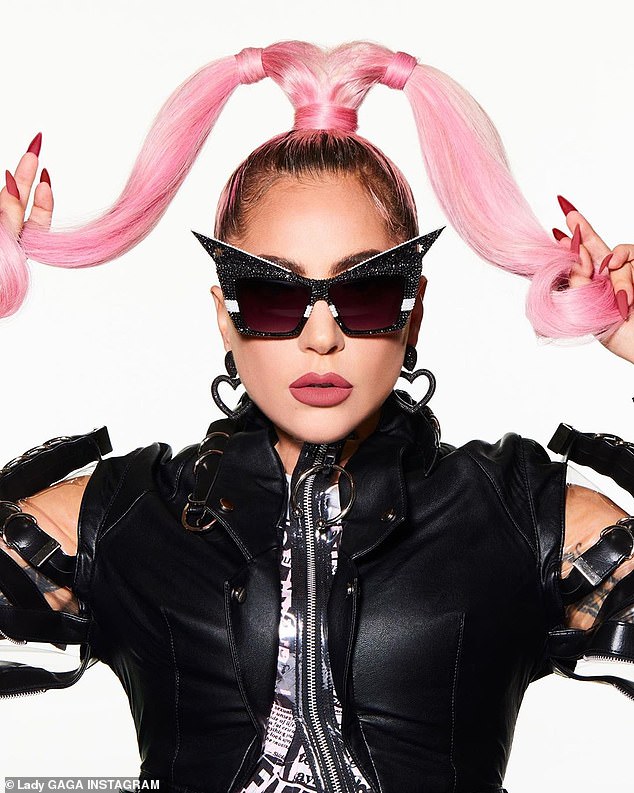 She loves her new pink hair: Later on Thursday the star shared this fun image