Molly showed her support for Nathaniel on Saturday, cosying up to the star footballer, who is currently on loan from Liverpool, on the pitch after he helped Bournemouth get promoted to the Premier League.

The model, 24, first hinted at signs of a romance with the centre-back player, 25, on Instagram last June, uploading a picture of the footballer during a walk and captioned it with a smiley face emoji with love hearts. 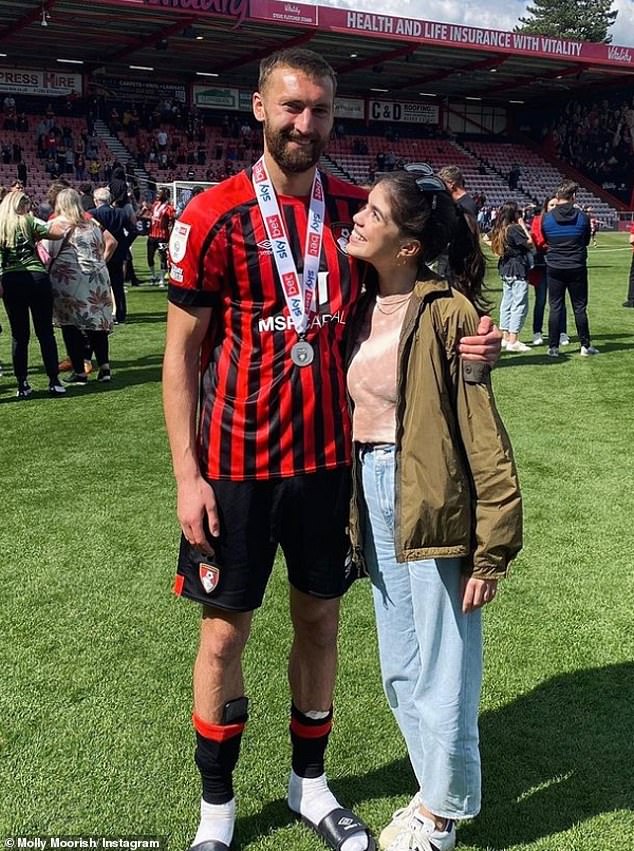 Official: Liam Gallagher ‘s daughter Molly Moorish has confirmed she is dating Liverpool footballer Nathaniel Phillips, sharing a photo of her and her beau on Instagram

Almost a year on, and the couple have gone Instagram official, with a smitten Moly captioning her new snap taken on Saturday: ‘Big fan of your work @nathaniel_phillips.’

While Lisa has showed her support, Molly’s relationship may provide some awkward moments between Nathanial and her dad Liam, who is a devoted Manchester City fan. 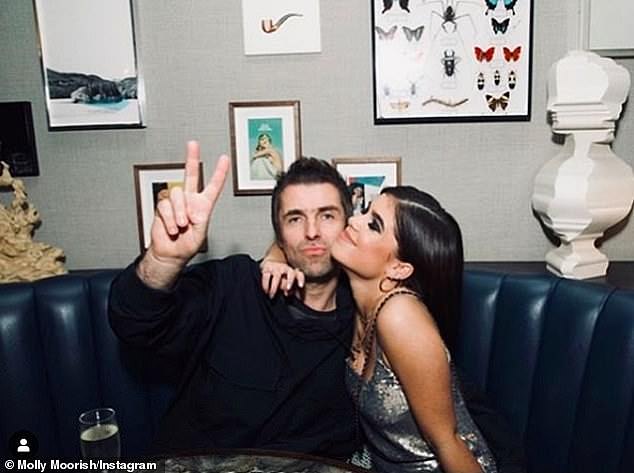 Close: While Lisa has showed her support, Molly’s relationship may provide some awkward moments between Nathanial and her dad Liam, who is a devoted Manchester City fan

A source told The Sun last June that Molly and the footballer ‘have been growing close for a while, their budding relationship is common knowledge among their friends and their families.

‘Although they have kept their romance quiet they appear to be getting on really well.

‘Everyone around them thinks they make a nice couple. Molly is clearly smitten. It’s early days yet but they seem very much in the honeymoon period.’ 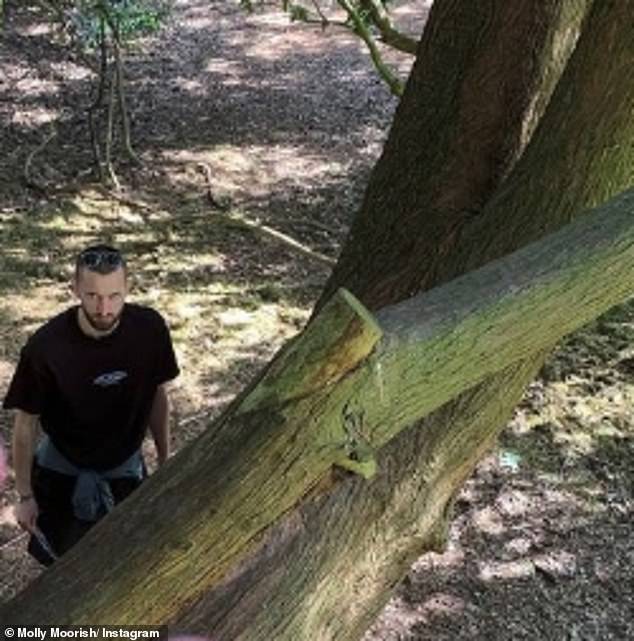 Early stages of dating: The model first hinted at signs of a romance with the centre-back player on Instagram last June

Molly’s representatives declined to comment when contacted by MailOnline at the time.

Back in November 2021  it was reported the model split from Louis Hartley after six months of dating.

She deleted all trace of her ex from social media after she and model Louis decided to end their romance after lockdown reportedly ‘put pressure’ on their romance.

Molly first confirmed her romance with Louis in May 2020 when she shared a cosy snap with him, after they met through mutual friends. 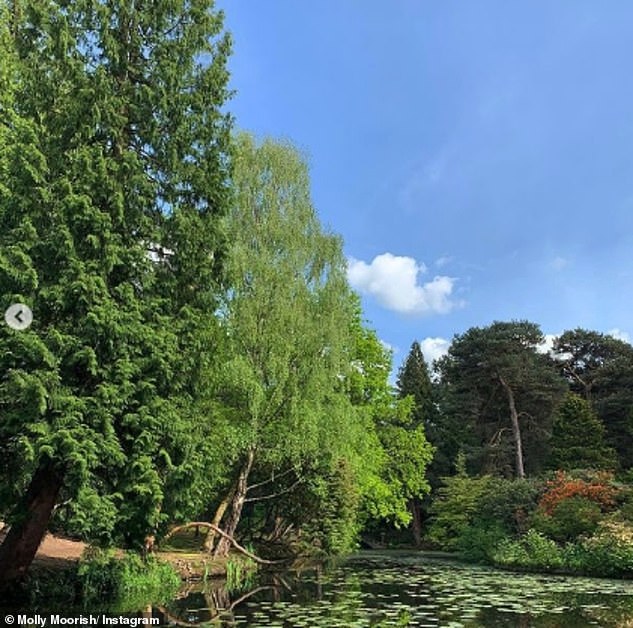 Date: Molly uploaded a picture of the footballer during a walk and captioned it with a smiley face emoji with love hearts

A source told The Sun: ‘Molly and Louis were totally smitten and they were closer than close when they first started dating earlier this year.

‘But lockdown has put pressure on them – it’s not a great time when you’re dating someone new – and they decided to end it.

‘It’s been a bit of a messy split and Molly has deleted every trace of Louis from her social media accounts. It’s like their relationship didn’t exist.’

MailOnline contacted representatives for Molly at the time.

Her dad Liam previously revealed he’d given the relationship his seal of approval, after reconnecting with his daughter following 20 years of being estranged.

A source told the Sun during Molly’s romance with Louis: ‘While Liam isn’t everyone’s cup of tea as a potential father-in-law he’s given Louis his approval. 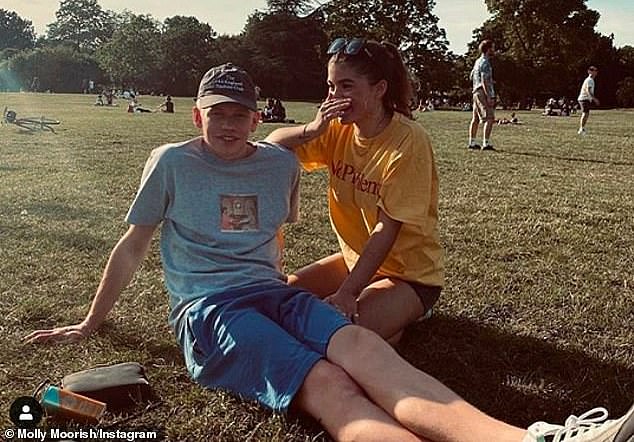 Moving on: Back in November 2020 it was reported the model split from model Louis Hartley after six months of dating

‘It’s a huge relief as no one wants to be on the wrong side of him. Molly is the apple of Liam’s eye and he just wants to see her happy.’

In February 2020, Molly also revealed she still turns to her dad for ‘boy advice,’ telling GRAZIA: ‘I go to him for boy advice. He’ll be like, ”Stay away from that one…”’

It was reported that Molly was born after Liam cheated on his wife at the time, Patsy Kensit with Molly’s mother, singer Lisa.

In February 2018, Liam confessed to not meeting Molly yet and told The Mirror: ‘I’ve just never got around to meeting her. I’ve heard she’s all right, though. She’s doing all right. I never heard anything that she wanted to meet me.’

Liam revealed he wrote a song called Now That I’ve Found You about his formerly estranged daughter.

In May 2018, Liam shared a snap on his Instagram with Molly and his two sons Gene and Lennon. It is thought that she came to watch her dad perform at the London Stadium along with her half-brothers and the two finally met. 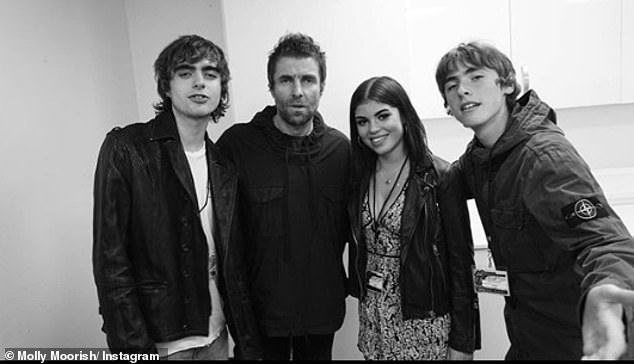 Reunited: In May 2018, Liam shared a snap on his Instagram with Molly and his two sons Lennon and Gene on the night they met for the first time