They all met on the fourth series of hit reality dating show Love Island.

And Laura Anderson reunited with a couple of her co-stars on Tuesday, as she posed for a socially-distanced snap with Dr Alex George and Jack Fincham.

While fans were delighted to see their favourite Islanders make a comeback for new spin-off Where Are They Now?, many claimed former flight attendant Laura, 31, looked ‘unrecognisable’ in the image. 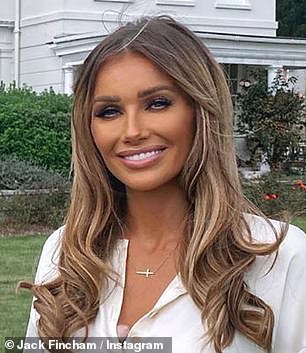 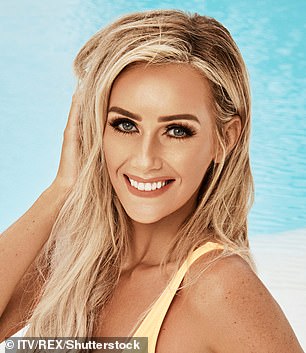 ‘I didn’t even recognise her!’ Love Island fans claimed Laura Anderson looked ‘unrecognisable’ as she reunited with her co-stars for socially-distanced filming  on Tuesday (R in 2018)

‘That’s not Laura!!! I didn’t even recognise her!

‘wow laura doesn’t even look like laura… is that even Laura….’ (sic)

Another referenced the reality star’s cosmetic procedures as they added: ‘I don’t even recognise Laura since her surgery. Shame she was so pretty and didn’t need to change her appearance at all.’ (sic) 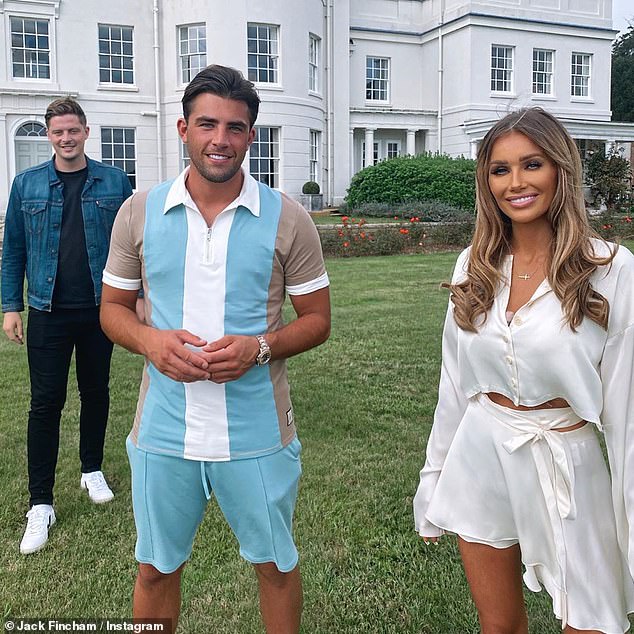 Group shot! The former flight attendant, 31, was joined by Dr Alex George and Jack Fincham as they shot scenes for Love Island: Where Are They Now? 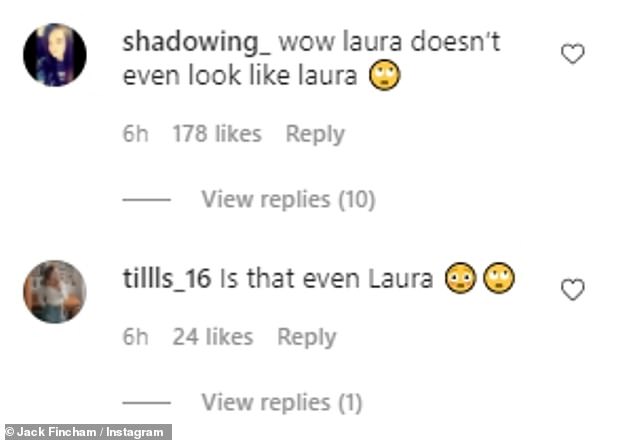 The media personality has made no secret of having Botox and lip fillers in the past – treatments she claimed she planned before entering the villa in 2018.

TV star previously told The Sun: ‘I went for a place that I know does a natural look. I know there’s a lot of young people that follow me and I don’t want to promote anything like that as it’s a dangerous topic really.

‘People have to feel good [inside] before they do all that I believe that but for me it’s something I wanted to do for a really long time and I came out and just did it as I was thinking about it while I was in there.

‘It’s a touchy subject and I get that and I would never want to promote that to young girls, but I still want to live my life for me. It’s hard, but I’m nearly 30.’

‘She looks absolutely stunning!’ Others decided to focus on how ‘beautiful’ the blonde looked on set 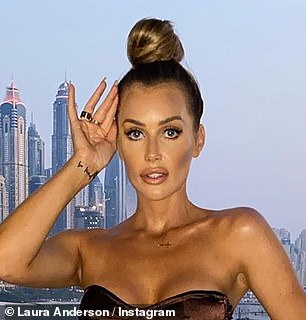 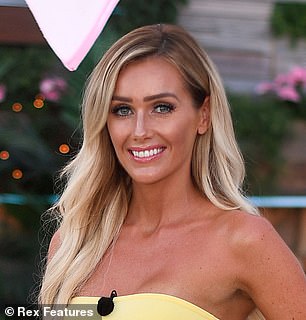 ‘It’s a touchy subject’: The media personality has made no secret of having Botox and lip fillers in the past (pictured L last month, R in 2018)

Laura looked stylish in ivory silk co-ords, which consisted of a cropped blouse, teamed with a flippy mini skirt, tied at the waist.

The TV star styled her highlighted locks in loose curls, while enhancing her pretty features with a heavy glamorous coat of make-up. 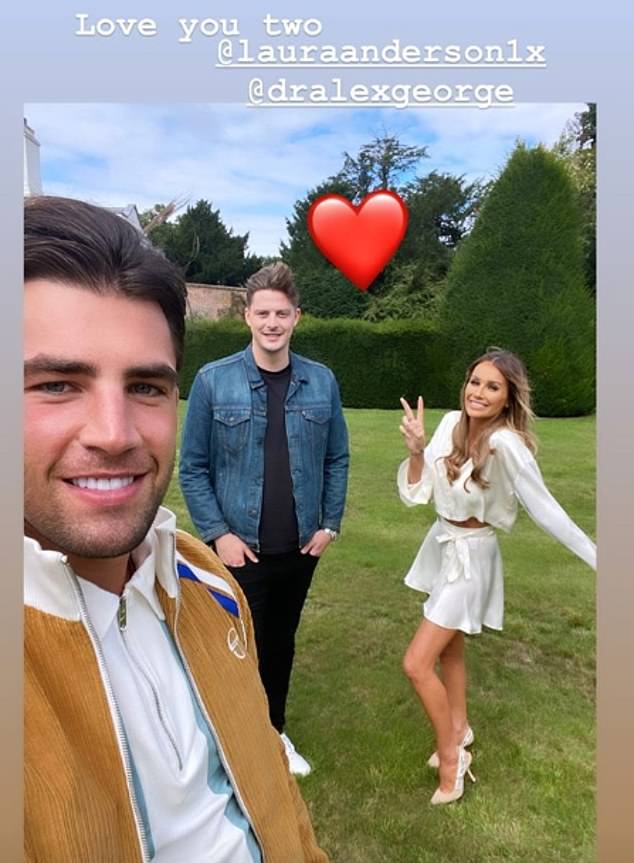 Jack later shared another sweet snap of the trio on his Stories and captioned it: ‘Love you two @lauranderson1x @dralexgeorge.’

Dr Alex sported a low-key look, as he donned a black T-shirt and jeans, teamed with a denim jacket and a pair of white trainers.

The outing comes a day after Dr Alex returned to social media after taking a break to look after his mental health following the tragic death of his brother Llyr. 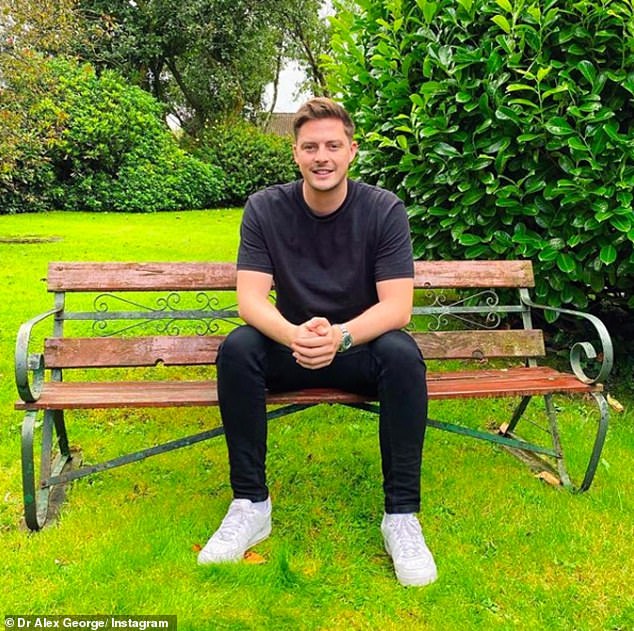 Returned: The outing comes a day after Dr Alex returned to social media after taking a break to look after his mental health following the tragic death of his brother Llyr

Elsewhere, a number of former Love Island stars have reportedly been left outraged, after allegedly being snubbed from appearing in an upcoming reunion special.

The three-part special, said to be called Love Island: Where Are They Now?, was originally planned to be restricted to the top four contestants from each series, but exceptions have reportedly been made − sparking alleged feuds.

A source told The Sun: ‘Those involved are very excited, but it has put a few noses out of joint among stars who haven’t been asked, especially those who think they are bigger names than those who have. 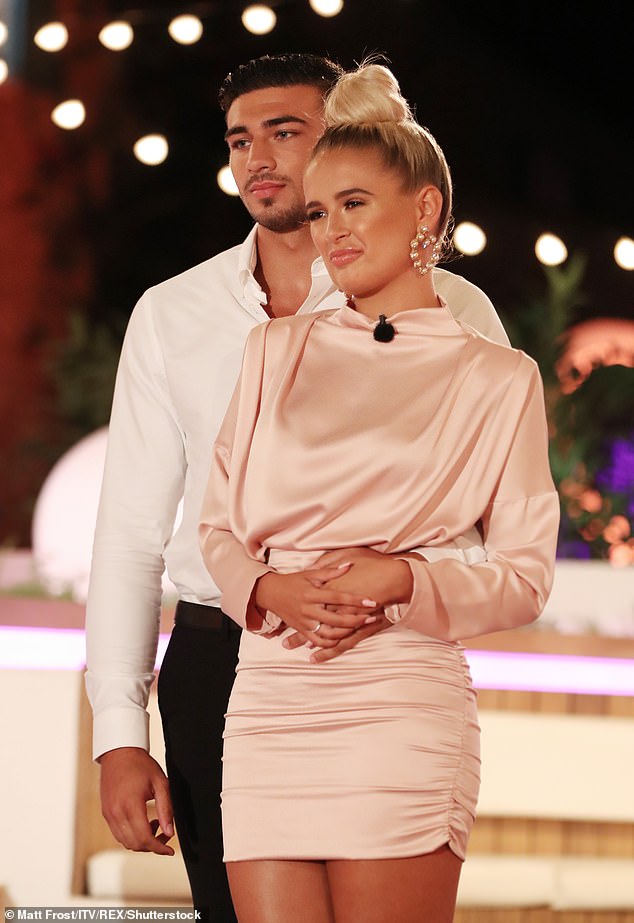 On the list: A number of former Love Island stars have allegedly been snubbed from appearing in an upcoming reunion special, which will include Molly-Mae Hague and Tommy Fury

‘Unfortunately things have got a bit nasty between some. At first it was just going to be the finalists from each series, but once exceptions started being made it really sparked anger and resentment.’

Among the former contestants expected to take part in the special are 2018 breakout stars and exes Megan Barton Hanson and Wes Nelson, and last year’s runner-ups Molly-Mae Hague and Tommy Fury.

Meanwhile, Montana Brown, who narrowly missed out on the finale in 2017 after she was dumped from the Mallorca villa with her then-beau Alex Beattie, is said to be included in the line-up of returning stars. 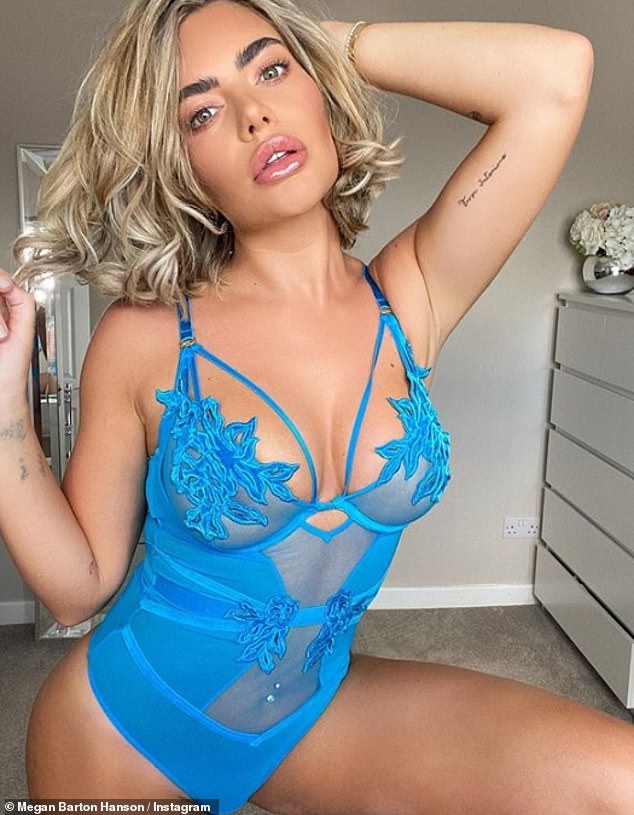 Star: Megan Barton Hanson has also reportedly been included in the line-up of returning stars

A source said: ‘It’s just not possible to have everyone on in three episodes – so unfortunately the reality is some people have had to miss out.

‘A few of them have kicked off a bit about it, but that’s just life. They can squabble among themselves all they want.’

MailOnline has contacted a representative for Love Island for comment. 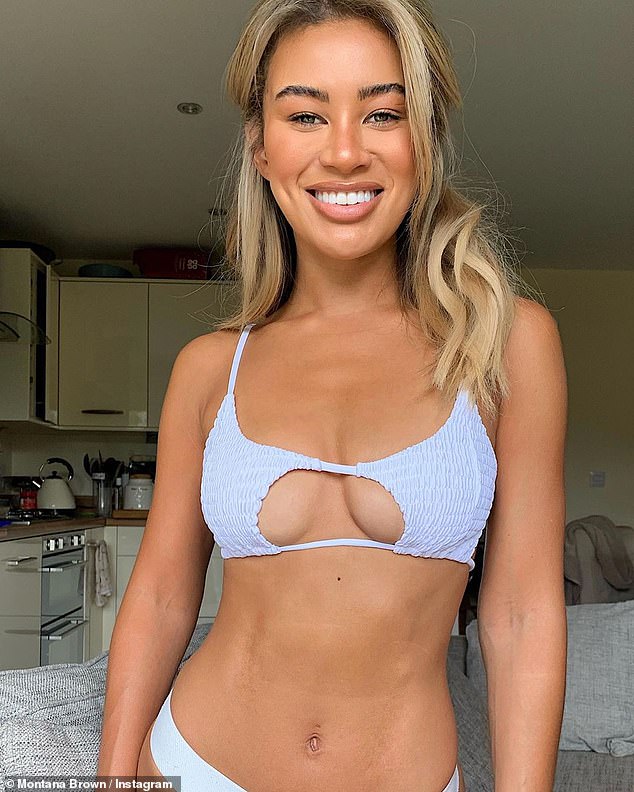 Rules: Despite initial reported rules that only the top four from each series would be featured, Montana Brown − who narrowly missed out on the 2017 final − is said to have been included