She is a body confidence advocate who jetted off to Dubai for a festive getaway.

And Malin Andersson looked stunning as she took a stroll along the beach in an animal print bikini on Sunday.

The Love Island star, 28, was a vision in a tiny two-piece as she made the most of her final days in the sun ahead of her return to England. 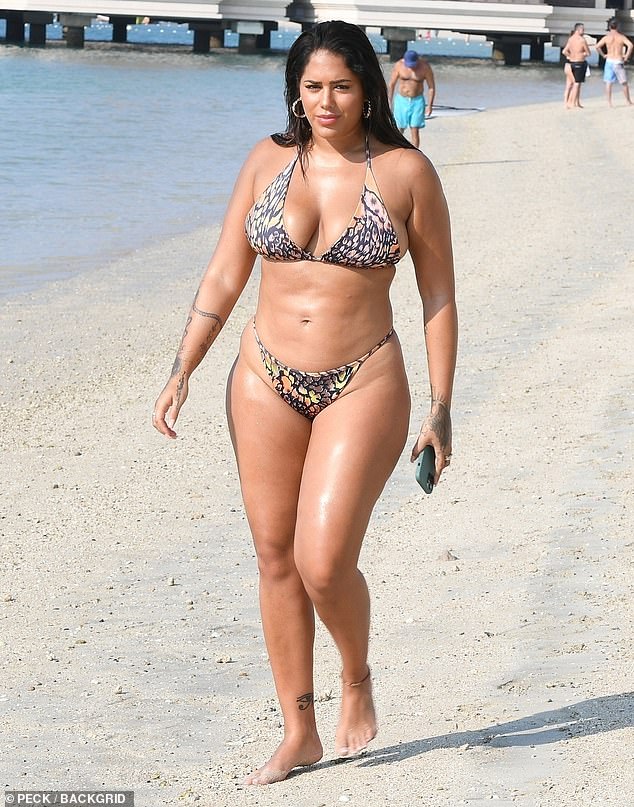 Stunning! She is a body confidence advocate who jetted off to Dubai for a festive getaway. And Malin Andersson looked stunning as she took a stroll along the beach on Sunday

Malin took to Instagram Stories on Sunday and admitted that she is ‘actually so nervous’ to return home, but plans to ‘do a massive detox’ and cleanse her ‘mind, body and soul’ when she comes back.

She didn’t let her worries ruin her beach day, however, as the TV personality looked in good spirits as she flaunted her curves on the outing. 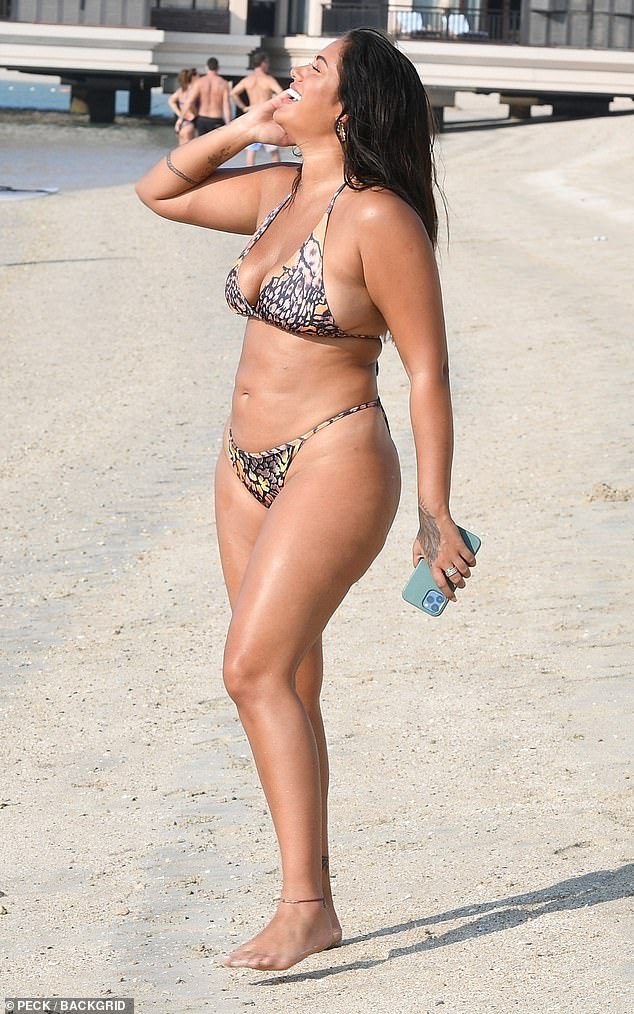 Stop and smile: The brunette beauty opted for minimal make-up and wore her locks loose and hanging down her back, as she threw her head back and smiled on the beach

She stopped for a moment, throwing her head back and smiling as she took in her surroundings.

Malin ran into some friends on the sand, as she showcased her peachy posterior in thong-style bottoms.

The outing came after Malin expressed her concerns about returning to England following her festive break. 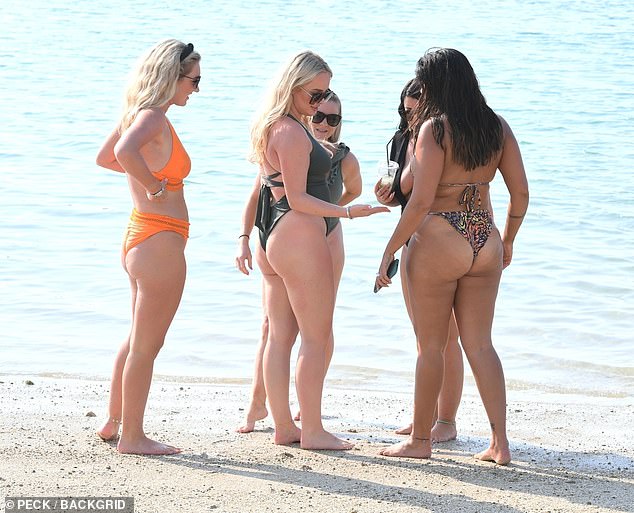 Friends: Malin ran into some friends on the sand, as she showcased her peachy posterior in thong-style bottoms

On her Instagram Stories, the reality star said: ‘I’m actually so nervous to come home because I’ve been in my own little bubble for two weeks, just over. It like ah, f***, I’ve got to go back to England.

‘But it’s got to be done. I’ve got to work, get my health back, exercise, have my morning smoothies, produce some amazing content for you all. Because yeah I’ve just been f**ting around.

‘I was thinking, “oh yeah, I can work in Dubai”. I absolutely can’t. All I did was drink.

‘But yeah, I’m going to do a massive detox, cleanse my mind, body and soul. Meditate – I haven’t meditated.

‘I haven’t read since I’ve been here – like I only read at the beginning and yeah today’s just become a bit crazy, so I need to realign.’ 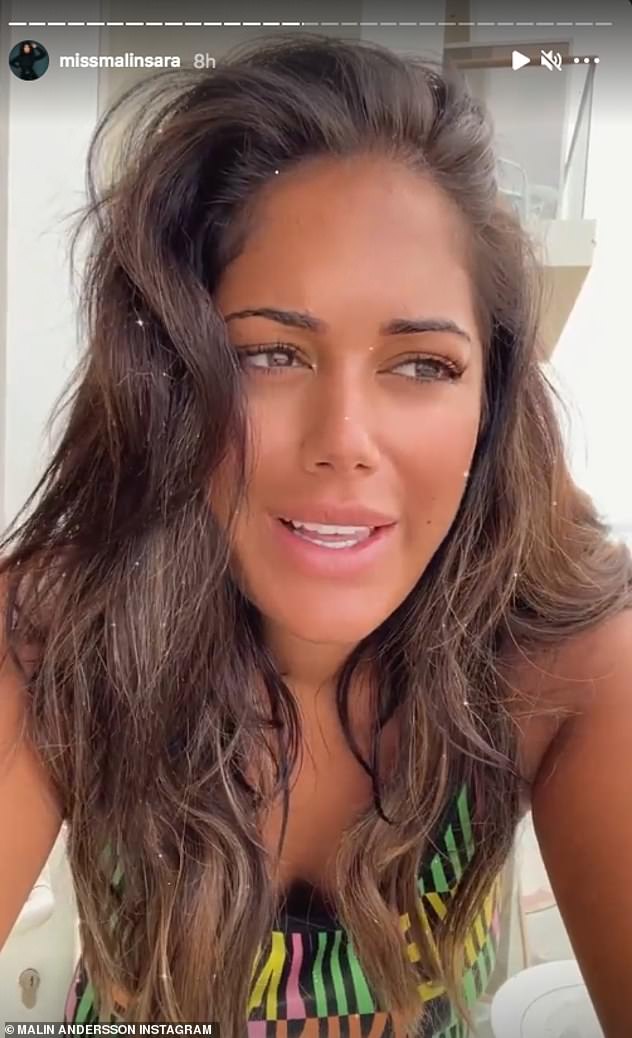 Nerves: Malin took to Instagram Stories on Sunday and admitted that she is ‘actually so nervous’ to return to England, but plans to ‘do a massive detox’ when she comes back

On Friday, the reality star showed of her ‘biggest bloat ever’ while posing in a white bikini as she welcomed in 2021 with a beach day in Dubai.

Taking to Instagram, Malin shared an unfiltered snap of herself looking at her stomach and admitted: ‘Water retention, period cramps, spots, you name it – I’ve brought it into 2021.’

In a lengthy caption alongside her photo, Malin wrote: HAPPY NEW YEAR! As always – I keep it real with ya’ll! 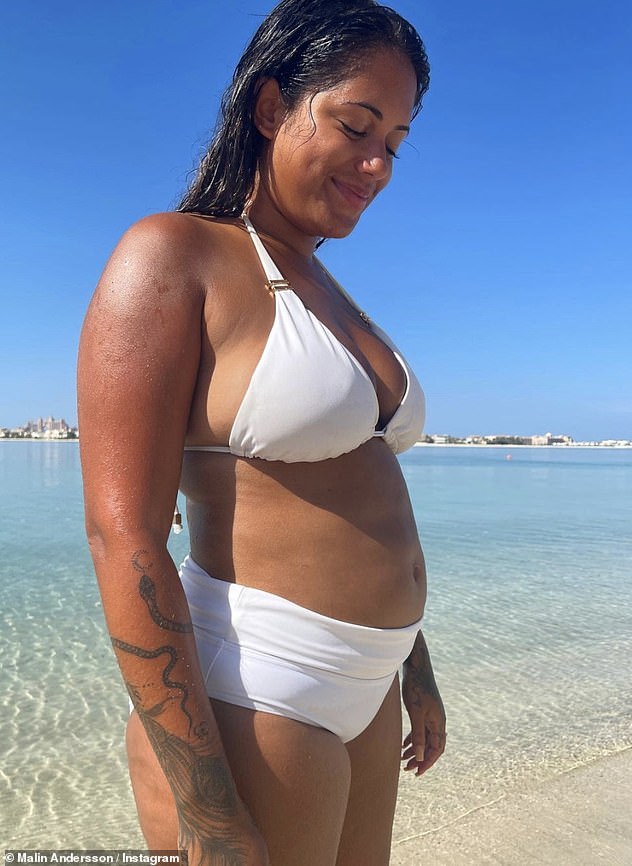 Keeping it real: Malin showed off her ‘biggest bloat ever’ while posing in a white bikini as she welcomed in 2021 with a beach day in Dubai on Friday

‘I am entering 2021 with my period and the biggest bloat ever – it’s gotta be up there with the biggest! Water retention, period cramps, spots, you name it – I’ve brought it into 2021.’

As well as detailing what her body was experiencing, Malin reflected on the past two years of her life and asserted that she’s proud of what she’s achieved, despite the ‘s**t cards’ she’s been dealt.

The influencer also urged her followers to not put on added pressure to be the ‘best version’ themselves, which often happens with New Year’s resolutions. 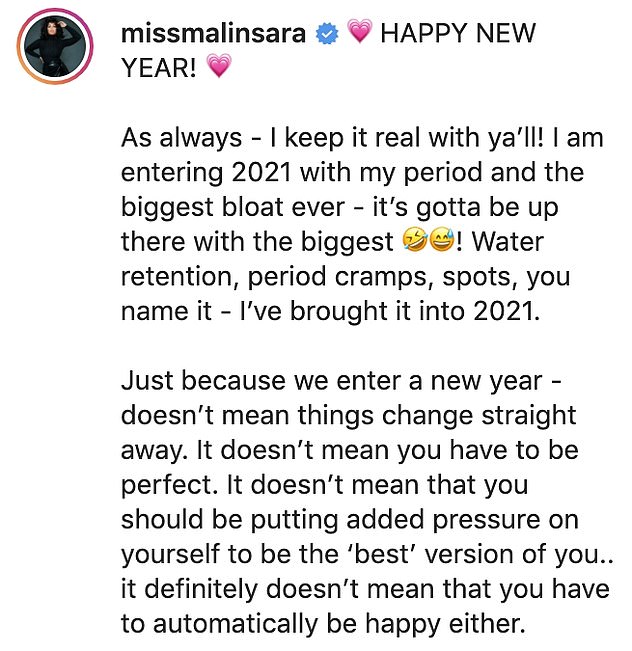 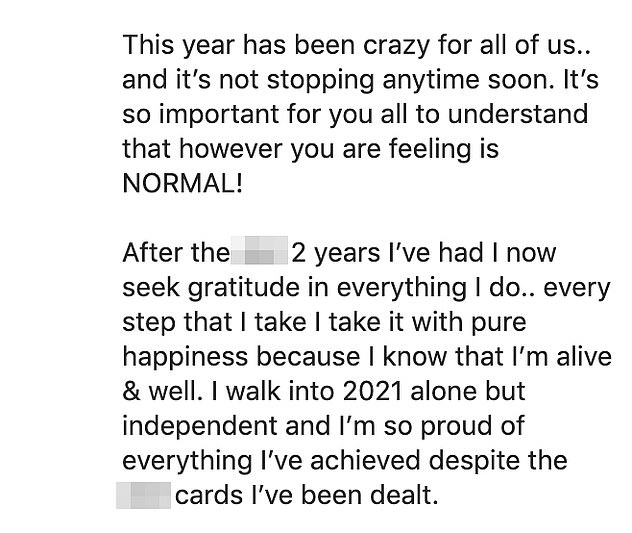 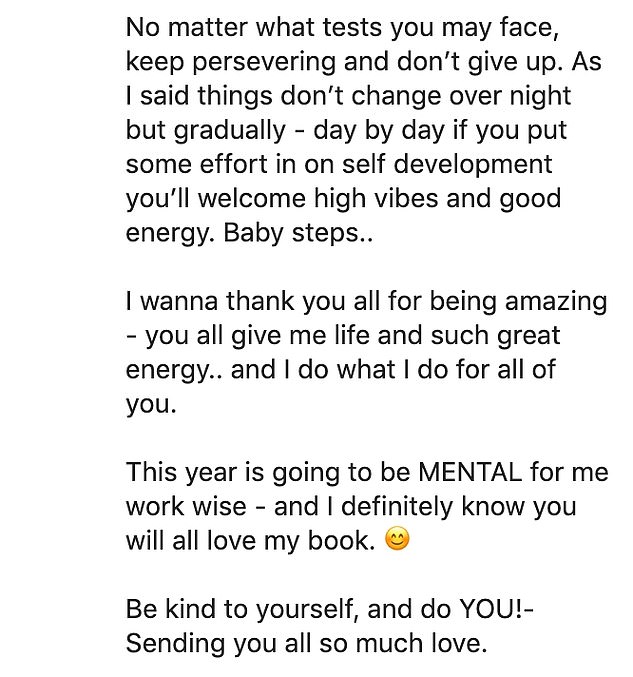 Candid: Taking to Instagram, the Love Islander shared a lengthy caption alongside her snap, detailing what her body was experiencing, and reflected on the past two years of her life

Malin, who was also in Dubai at the beginning of December, jetted back to the UAE for another break from London last Monday.

She previously said that she’s left the UK for the sake of her mental health due to it being such a difficult time of year for her.

Her baby Consy was born seven weeks premature in December 2018 and was being treated at Great Ormond Street hospital, but sadly passed away aged four weeks on 22 January, 2019.

On Wednesday, Malin honoured her late daughter Consy’s birthday, by sharing a beautiful picture of her baby alongside a poignant message.

‘Would you have had the same crazy care-free personality as me? Would you have been obsessed with the moon and stars, and the love for cheese and olives.. and racing cars. ✨ I will never know.

‘You see the pain of losing a child never truly gets easier, you kind of learn how to deal with the ongoing pain. 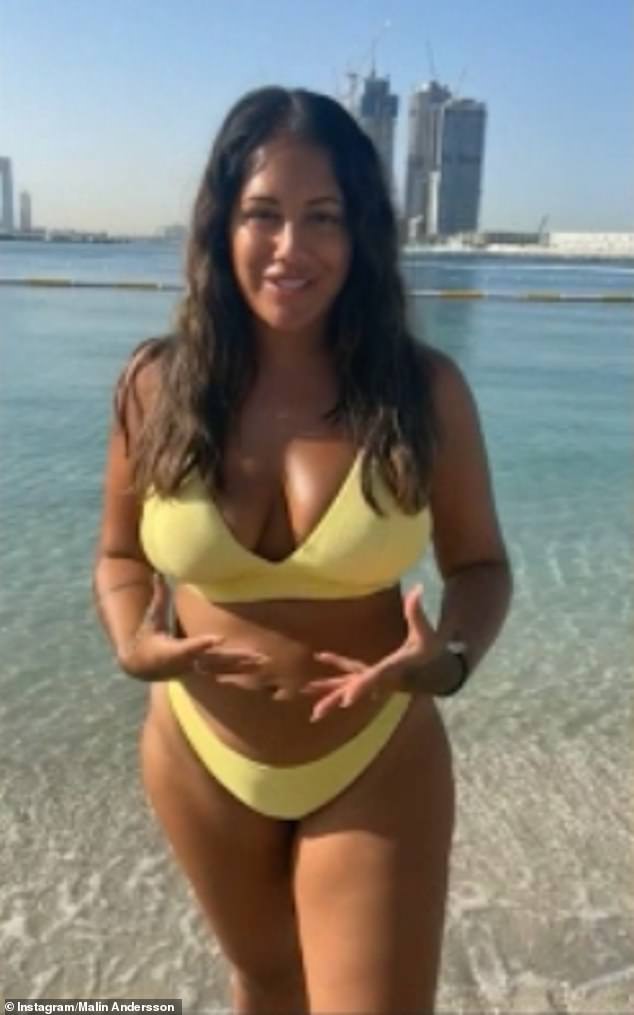 Curves: Malin looked incredible in a tiny bikini as she shared an empowering message on Wednesday, giving them her advice for 2021

‘The pain becomes part of who you are – an add on extension of your personality in a way. In the two years of losing Consy I can safely say I’ve come a long way. I’ve seen things in HD – pure clarity and I’ve evolved in ways I never thought were possible.’

She continued: ‘I’ve used the suffering I endured to keep me spurring on.. making sure my little girl, mum and dad would be proud of me. Although it hasn’t been an easy ride.. I still look into this picture – those deep brown eyes.

‘The day I gave birth and how sure I was that she would survive. My grieving process was made difficult because of the toxicity I was in, and I can now see why it took me a while to process her loss. 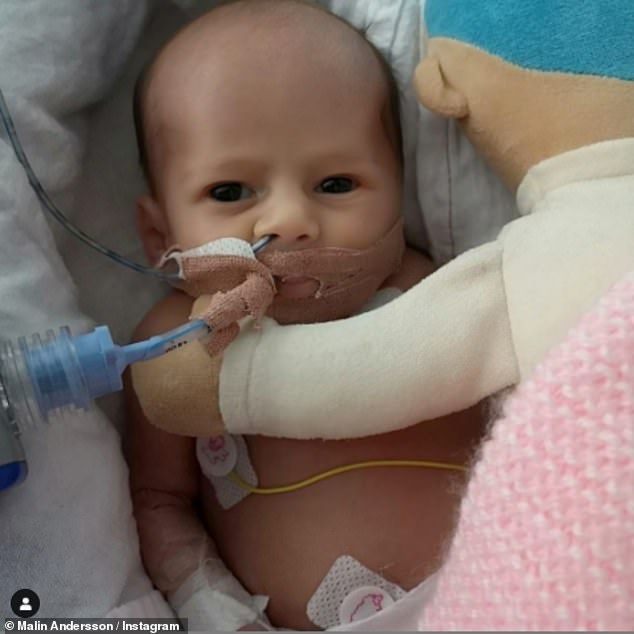 ‘I wonder what you would have been like, but I’ll never know’: Malin shared a painful birthday post for her late daughter Consy on her second birthday on Instagram last month

‘Life isn’t always smooth – in fact we all know it can be very far from.. but we need to do what’s best for ourselves. Our own mental health is a priority – and I will do anything now to make sure my mind is on form.

‘If you’re suffering, still in pain, grieving – start putting yourself first & begin the healing journey that you should be on.

‘Remove anyone that stands in the way of being your true authentic self & make yourself a priority. Nobody else will. Longing for you to be in my arms little one.. until we meet again. 23/12/18-22/01/19 @sandscharity .’ 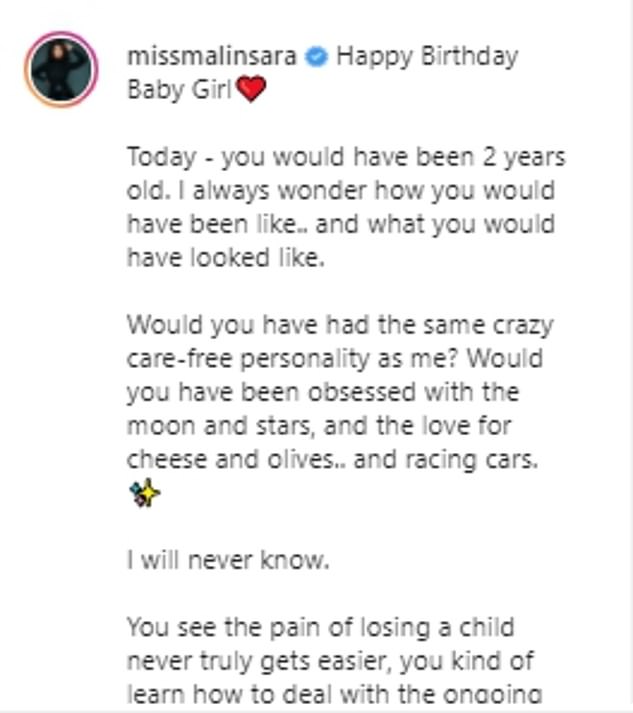 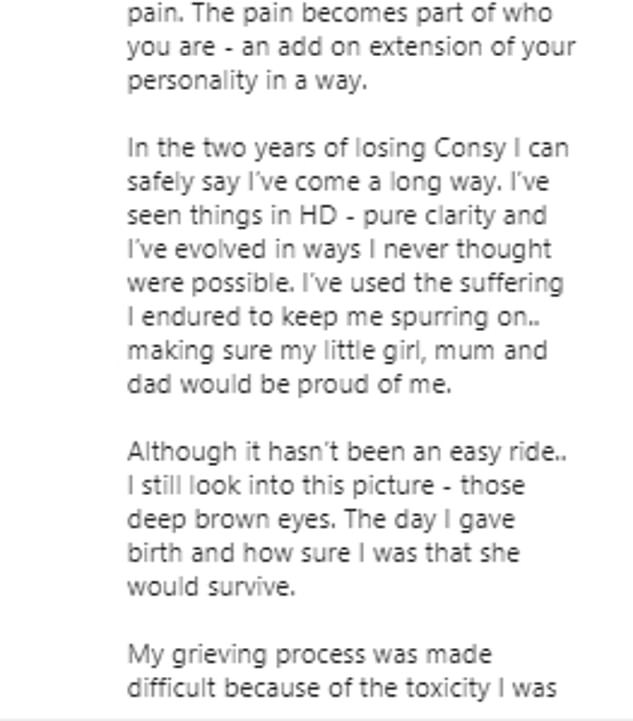 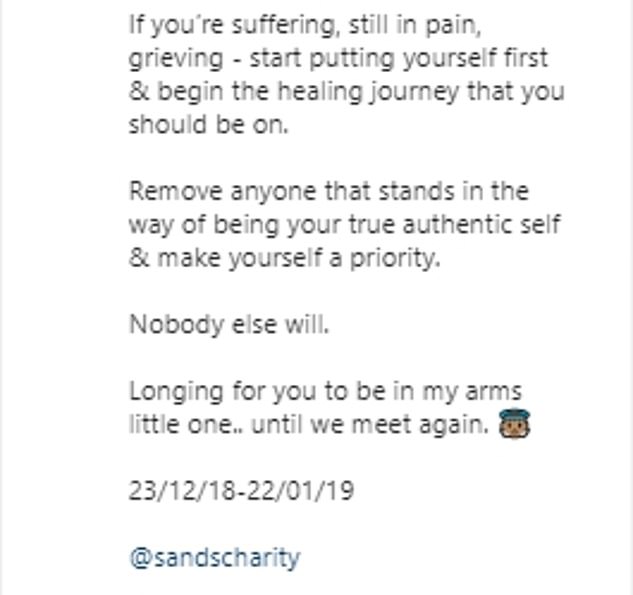 Poignant: She shared heartfelt words alongside her post as she remembered her baby daughter on her special day