Megan Fox has solidified her place as the queen of the naked dress.

The Jennifer’s Body actress stepped out for GQ’s Men of the Year party at The West Hollywood EDITION hotel Thursday, where she wore a new variation of the popular red-carpet trend. Her sleek, lingerie-style iteration featured a netted, long-sleeved overlay which featured visible seams, an off-the-shoulder neckline, and a hip-high slit. The piece also featured an asymmetrical black satin panel that gave a peek of underboob, as well as a long matching train that began at the waist.

The star paired the dress with a pair of high-waisted black underwear and platform stiletto sandals by Santoni, forgoing jewelry to show off her tattoos and the netting’s subtle shimmer. Her glam look included a romantic updo with face-framing tendrils, dramatic eyelashes, and a nude lip. 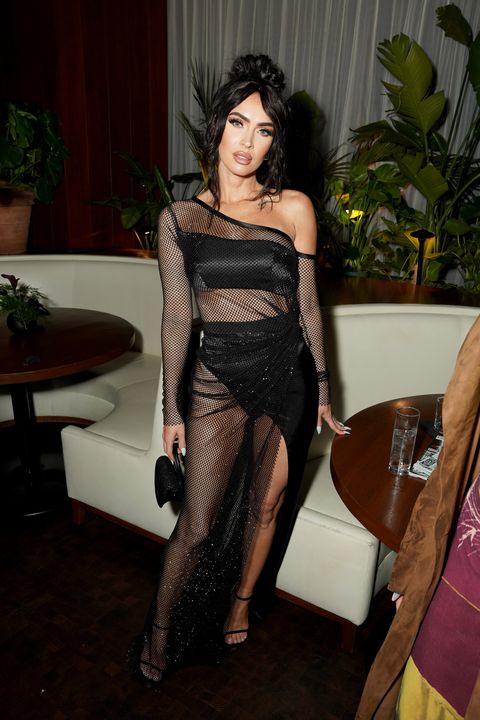 The morning after the party, the Till Death star shared the vampy look along with another structured dress that she wore on the same night to celebrate the launch of Jean Paul Gaultier for FWRD. The ivory midi-length gown from Jean Paul Gaultier couture by Olivier Rousteing features a strapless bodice and wide hips, with a draped design and short slit at the front. White platform sandals capped off the look.

She also posted the outfits with a relatable caption about her jam-packed night.

“2 events 1 night. When is it time to just stay in bed and eat gingerbread watching half blood prince ???” she wrote.