Bradley Cooper looked single and ready to mingle in a black suit at the Met Gala in NYC on Monday evening.

But during the event, the Nightmare Alley actor spent some special time with his ex-girlfriend and baby mama Irina Shayk; together they share daughter Lea De Seine Shayk Cooper, age five.

The former power couple were pictured arm-in-arm as they caught up with Nicki Minaj and fashion designer Riccardo Tisci. 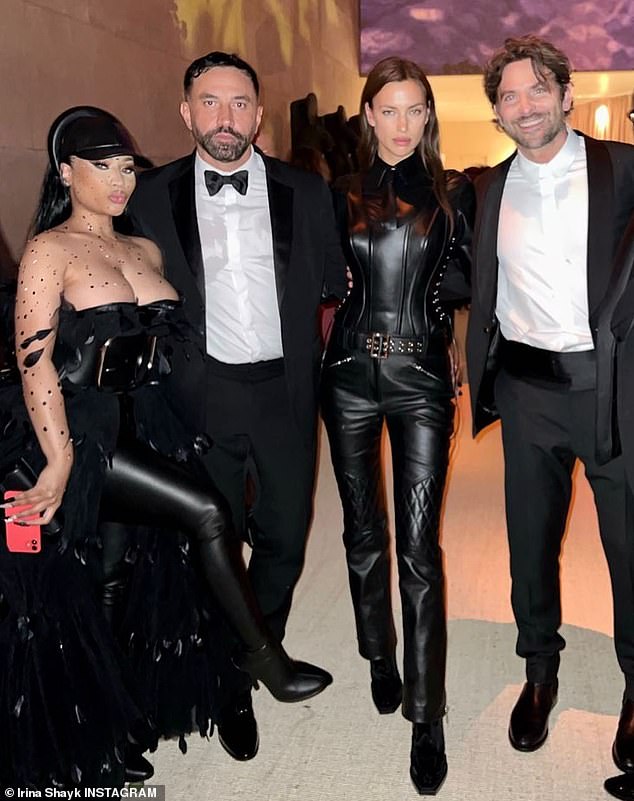 Bonded: Bradley Cooper and Irina Shayk were seen arm-in-arm at the Met Gala on Monday as they caught up with (from left) Nicki Minaj and fashion designer Riccardo Tisci

Cooper arrived alone in a black Louis Vuitton suit with a crisp white shirt and no tie. He also had a fuzzy week old beard making him look casually classic.

And while at the splashy event, the star was seen chatting up Emma Stone and Cynthia Erivo.

Shayk who looked ready for a motorcycle ride in her all black leather Burberry outfit that did not seem to fit well with the Gilded Age dress code.

Together Bradley and Irina have a daughter named Lea, aged five.

They seem to have a happy co-parenting relationship and are often seen together in Manhattan as they pick up and drop off Lea.

Back in black: Cooper arrived alone in a black Louis Vuitton suit with a crisp white shirt and no tie. He also had a fuzzy week old beard making him look casually classic. Shayk who looked ready for a motorcycle ride in her all black leather Burberry outfit that did not seem to fit well with the Gilded Age dress code 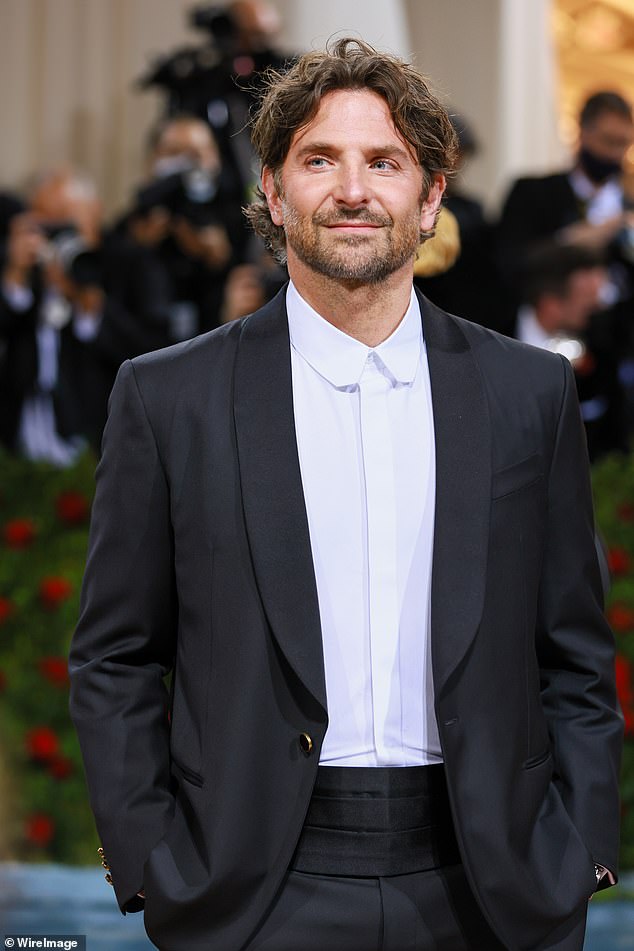 NO TIE! The actor left his tie at home but he did add a black satin cummerbund

This sighting comes after Cooper said he has a ‘crazy’ work ethic.

The 47-year-old actor admits that his passionate approach to work can occasionally make life difficult for some of his co-stars.

Bradley – who has starred in films such as ‘American Sniper’, ‘A Star Is

Born’, and the ‘Hangover’ franchise – explained: ‘Love equals discipline. If I love something, I can have the discipline. 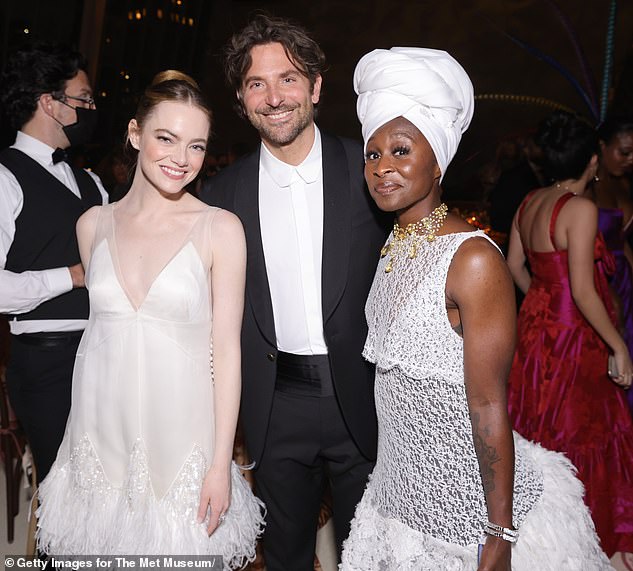 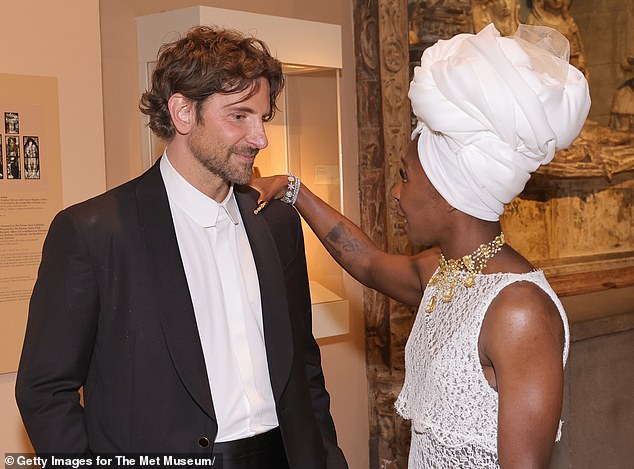 Hey pal: And Erivo put a hand on his shoulder when inside the Met Gala

‘I have a crazy work ethic. That is definitely true. So much so that the jobs that I have taken in the last five or six years, the people that I’ve worked with, I have said, ‘I work really hard, and this isn’t going to be easy.’ And it’s because I love it so much.’

Bradley dreamed of working in the movie industry during his younger years.

And he’s now desperate to make the most of every opportunity that comes his way.

The Hollywood star told Variety: ‘The thing that I just cannot live with myself is if I didn’t use that time to work as hard as I could to get it to the best place it could be. I grew up with this idea that we do what we do for a living; I dreamt it.’

However, he doesn’t have any intention of slowing down anytime soon and his passion for making movies remains as strong as ever.

He shared: ‘I don’t know if I ever dreamt this big. I don’t even know if I allowed myself to. Shame on me if I don’t work hard, and I’m here now. I’m not going to squander this. No way, man. No way. It all comes from love.’ 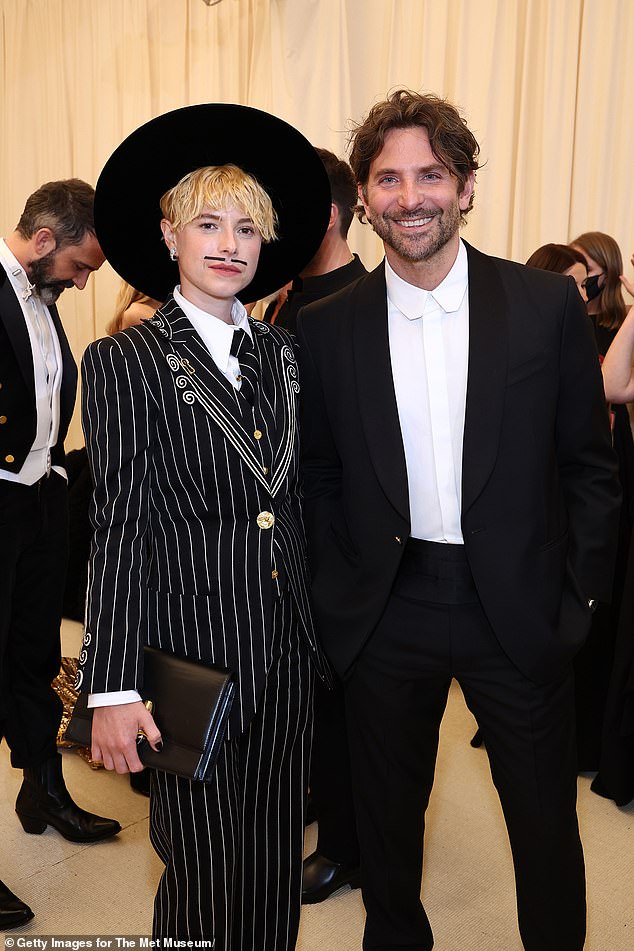 Hello friend: Cooper also posed with Jessie Buckley who had on a striped suit