Miley Cyrus took to her Instagram story on Wednesday to let her 120 million followers know that she had climbed a hotel sign with no clothes on.

The 28-year-old singer posted an image to her Instagram story showing her standing with The Flaming Lips frontman Wayne Coyne on the morning after a celebration that had been held for the musician’s 60th birthday.

The two appeared to be recovering from what was apparently a wild night of partying as the Wrecking Ball singer held her face in her hand. 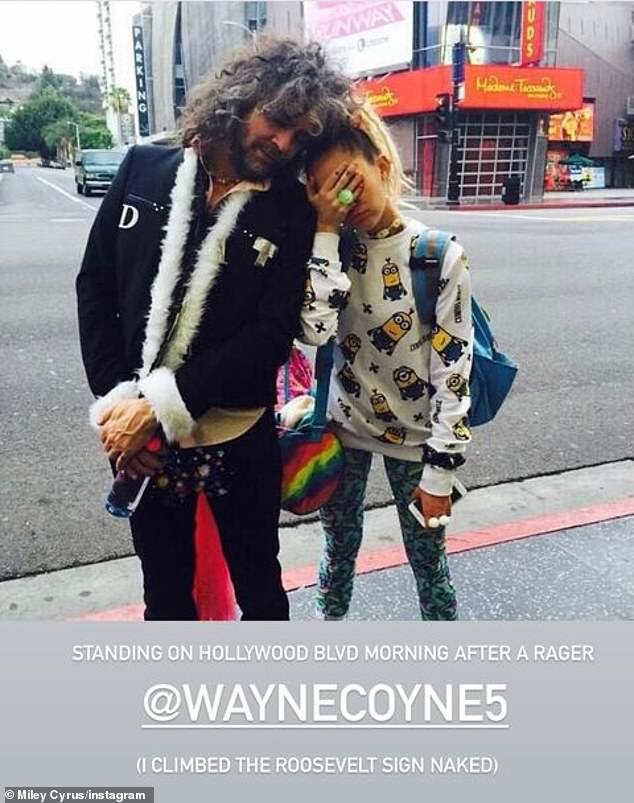 She can’t stop: Miley Cyrus posted a photo to her Instagram story on Wednesday to let her followers know that she had climbed the sign of the Hollywood Roosevelt Hotel with no clothes on during Wayne Coyne’s birthday party

In the caption for the post, Cyrus admitted to having done something rash during the celebration, partially writing: ‘I climbed the Roosevelt sign naked.’

She was dressed in a sweater featuring numerous Minions from the Despicable Me film series and continued her outlandish ensemble with a pair of psychedelic-printed leggings.

Cyrus’ hair was kept tied up in a messy ponytail for the shot, and she was also seen with a number of bags slung over her shoulders.

Coyne was pictured wearing a black coat with white fur lining, which he matched with a dark set of pants; he kept his hair characteristically messy for the shot. 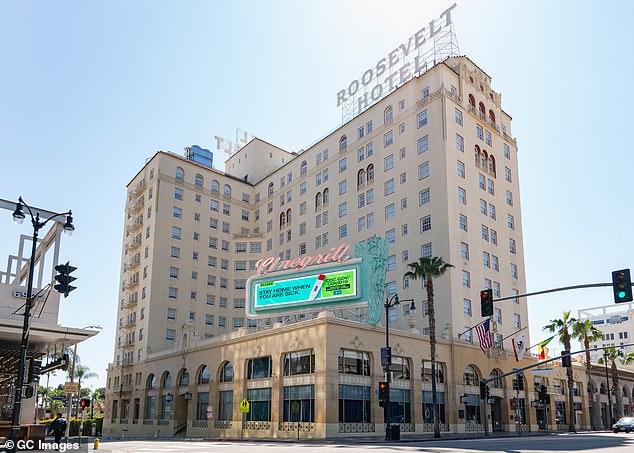 Location: The historic hotel has been in operation since 1927 and has been the center of many Hollywood functions; it is pictured displaying public health-related messages in April of 2020

The singer also shared a number of other images to her story from other times that she had shared with Coyne, including an instance where the two hung out with Blondie frontwoman Debbie Harry.

The musicians began working together in 2014, and the We Can’t Stop singer contributed vocals on two tracks from the Flaming Lips’ album With a Little Help from My Fwends, which was a song-for-song tribute to the Beatles’ album Sgt. Pepper’s Lonely Hearts Club Band.

The singer later collaborated with the band for her fifth studio album Miley Cyrus & Her Dead Petz, which was released in 2015. 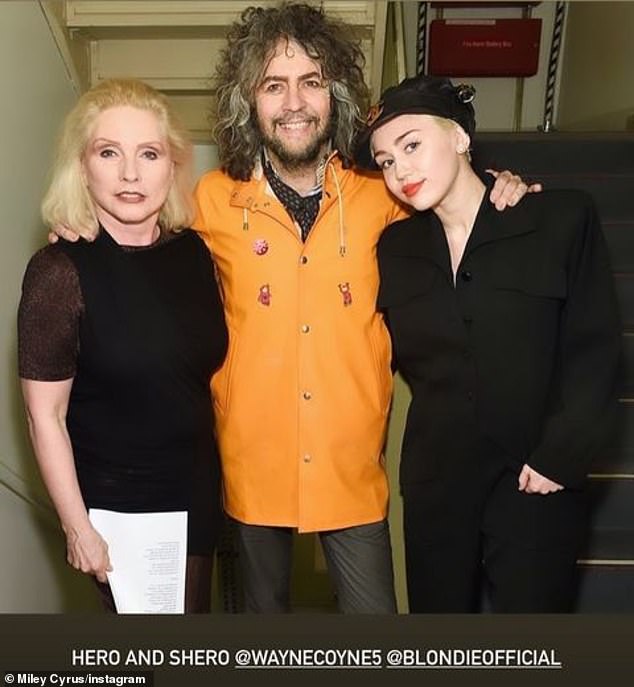 Kindred spirits: Cyrus began working with The Flaming Lips in 2014 and recorded vocals for two tracks on the band’s Beatles tribute album; Cyrus is seen hanging out with Coyne and Blondie singer Debbie Harry 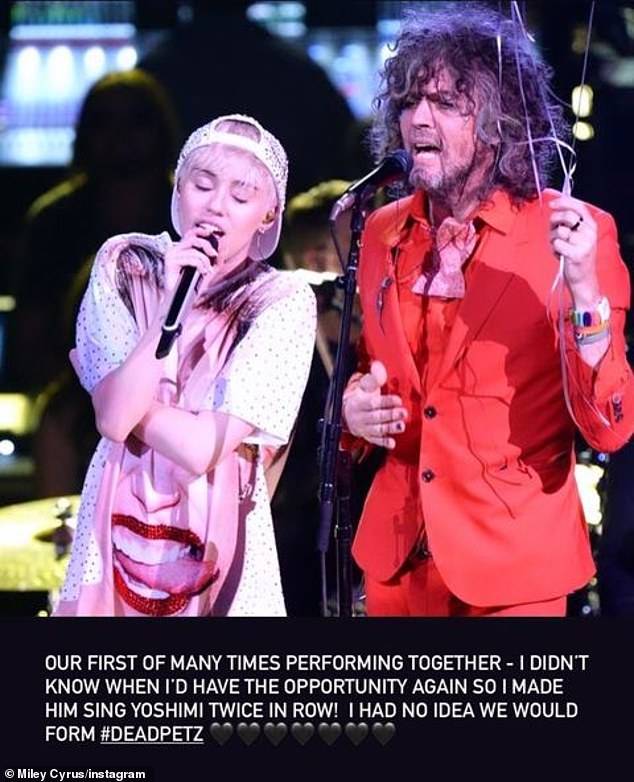 Working together: The Flaming Lips later collaborated with the Wrecking Ball singer for her 2015 album Miley Cyrus & Her Dead Petz, which was released for free

The album was notable for its radical departure from Cyrus’ previous pop-oriented sound, and featured contributions from producer Mike Will Made It and Phantogram singer Sarah Barthel, among others.

The Party In The U.S.A singer also made the bold decision of releasing the album for free without any previous promotion.

Cyrus embarked on a short tour after the project’s release, during which she was accompanied by the Flaming Lips and Dan Deacon. 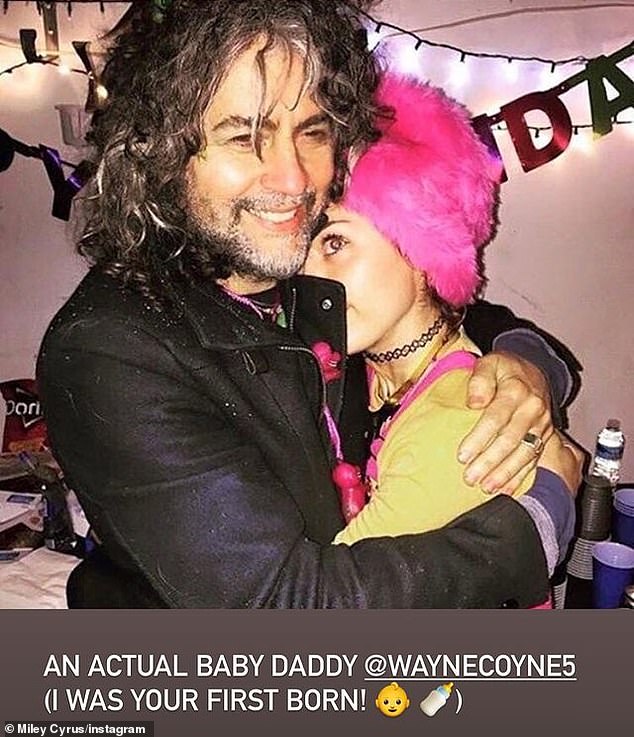 Mixed reception: The album was praised for Cyrus’ musical experimentation, although many critics found the project to be unrefined and grandiose in its execution

Miley Cyrus & Her Dead Petz was met with mixed reviews upon its release, with many reviewers praising the singer for her willingness to experiment with different musical ideas and criticizing her for the project’s production values.

In more recent years the album has received more positive critical attention, and has been referred to as a precursor in sound and tone to many of today’s rule-breaking pop acts.

Cyrus’ latest album, entitled Plastic Hearts, was notable for its glam rock-influenced musicianship and debuted at number two on the Billboard 200.

The Flaming Lips’ most recent album was released in September of last year and garnered positive reception from many critics. 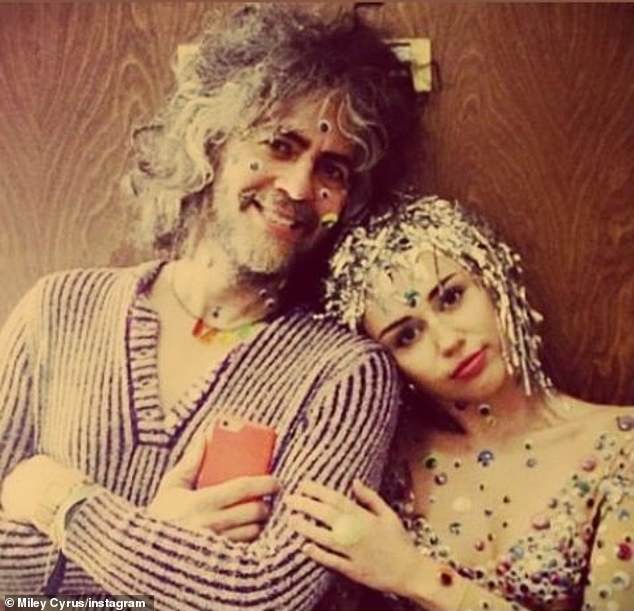 On the road: The Can’t Be Tamed singer embarked on a short tour after the release of her collaborative album; she was accompanied by The Flaming Lips and Dan Deacon