She announced in early August that she was pregnant and expecting a girl.

And Milla Jovovich was seen leaving a residential home in Los Angeles on Friday.

The 43-year-old is nine weeks away from giving birth to her third daughter, according to an Instagram post she shared earlier this week. 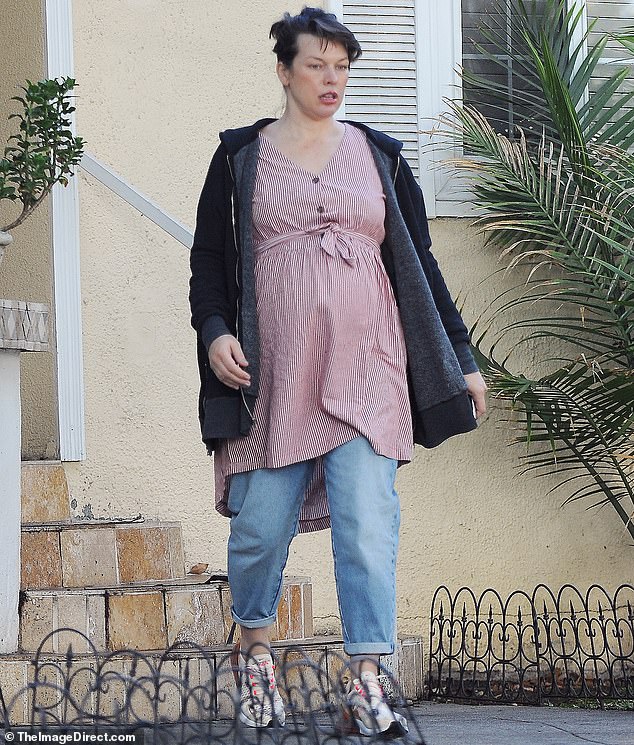 Out and about: Milla Jovovich, 43, was seen leaving a residential home in LA on Friday

Milla looked stylish in a red, striped maternity dress.  The blue-eyed beauty kept warm beneath a black hoodie and jeans, which she added to complete her look.

Milla wore her dark brunette locks tied back in a messy bun.

The Corto Maltese actress highlighted her natural beauty with minimal make-up, adding bronzer to her cheek and a flush of pink on her lip. 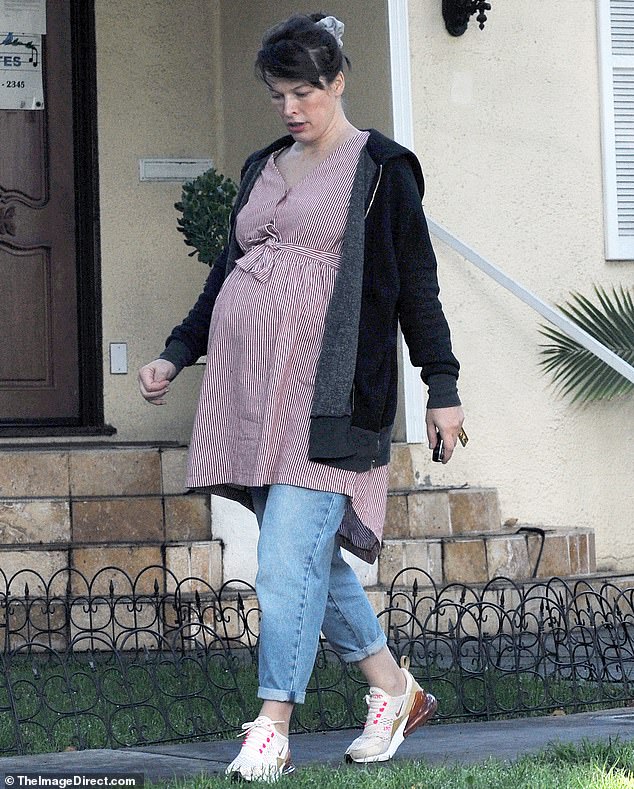 Comfy and cute: Milla looked stylish in a red, striped maternity dress. The blue-eyed beauty kept warm beneath a black hoodie and jeans, which she added to complete her look 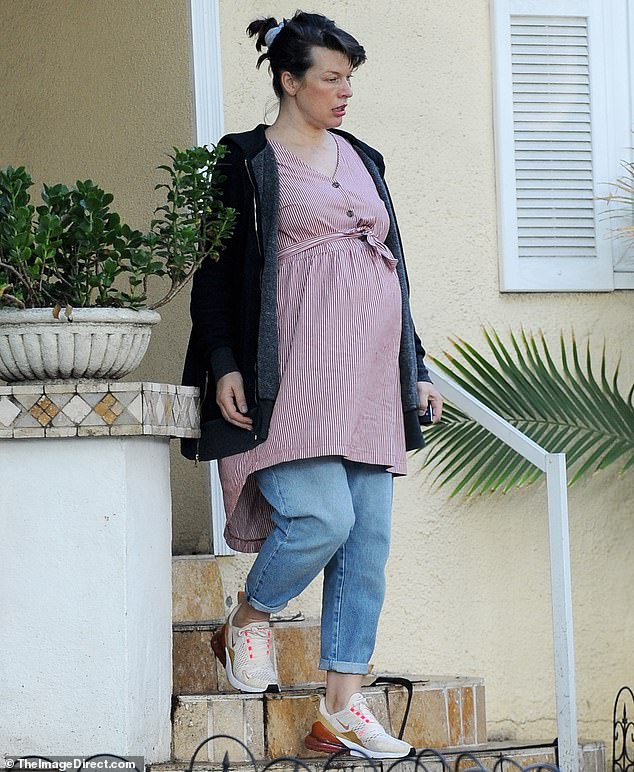 Coming soon! The actress is nine weeks away from giving birth to her third daughter

On Wednesday, Milla posed for a cute selfie, with put her large bump on full display.

The star, who was born in Ukraine, gave her followers an update  about her pregnancy, including her weight gain and her paranoia over a miscarriage risk.

‘Sexy mama on the school run pose,’ she jokingly began.

‘So here’s an update pic of my pregnancy, I’m 9 weeks away from dropping and it’s getting more and more difficult to get around, but I’m happy to say so far everything looks great with the baby and she’s coming right on schedule!

I’ve gained pretty much the same amount of weight that I always gain (about 50lbs. So far) but it just goes to show that your body will do whatever it’s meant to do regardless.’ 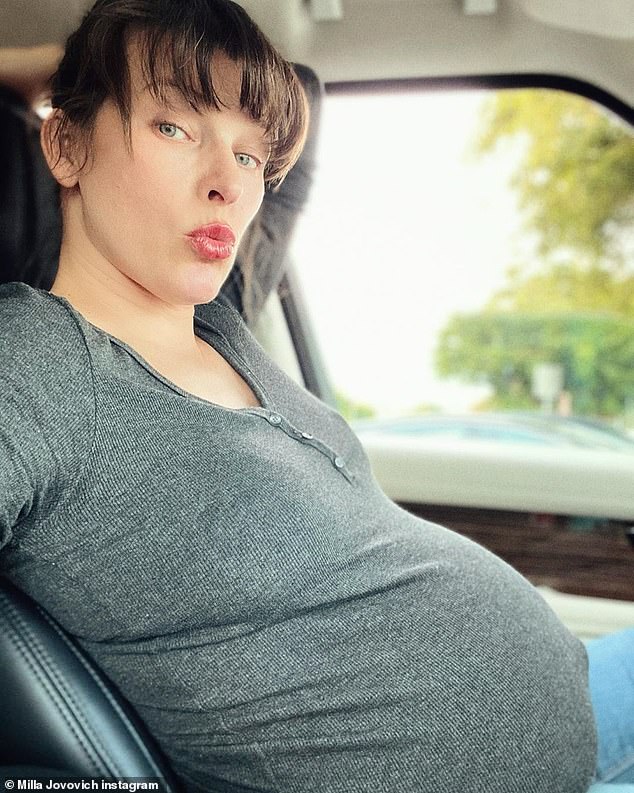 Keeping them informed: On Wednesday, Milla posed for a cute selfie, with put her large bump on full display. The star, gave her followers an update about her pregnancy, including her weight gain and her paranoia over a miscarriage risk

While she pointed out that the weight she’s gained is the same as her other pregnancies, she noted that she hasn’t exercised as much.

Milla wanted to keep herself away from anything that could ‘put me at risk of a miscarriage.’

‘Saying that i haven’t been exercising during this pregnancy like I did with the last, but I’m also being super paranoid and just really careful not to do anything that could potentially put me at risk of miscarriage.’

‘Anyway, the plus side is my mama boobs are back which is fun for a girl who’s always been flat as a board, so I’m enjoying the moment while it lasts! Sending everyone lots of love mid week and I hope you’re having a good one. Just a few more days till the weekend so take a deep breath, we’ll get there!’ 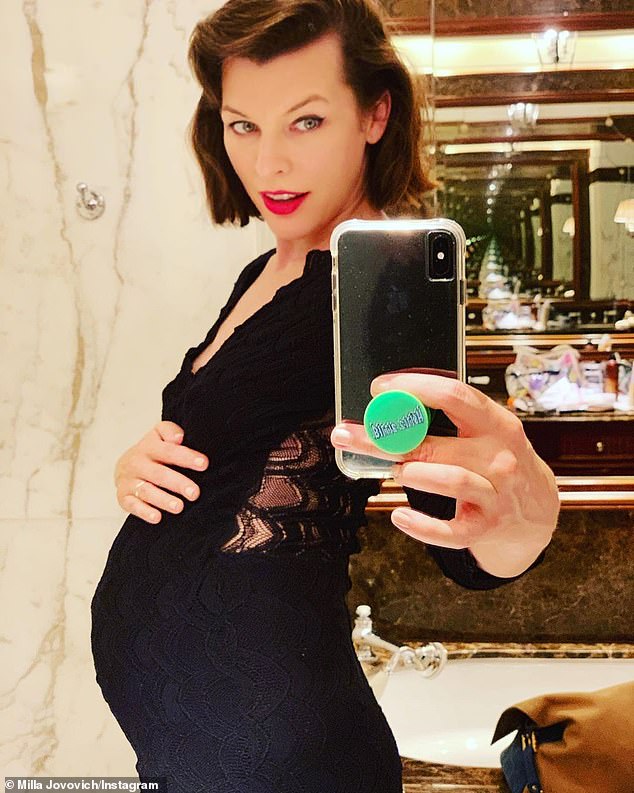 Her news: In August, she shared this photo to announce her pregnancy

In protest to a pro-life law put into effect in Georgia earlier this year, Milla shared her  abortion experience in an Instagram post.

‘I was 4 1/2 months pregnant and shooting on location in Eastern Europe. I went into pre term labor and told that I had to be awake for the whole procedure. It was one of the most horrific experiences I have ever gone through. I still have nightmares about it. I was alone and helpless…’ she said at the time. 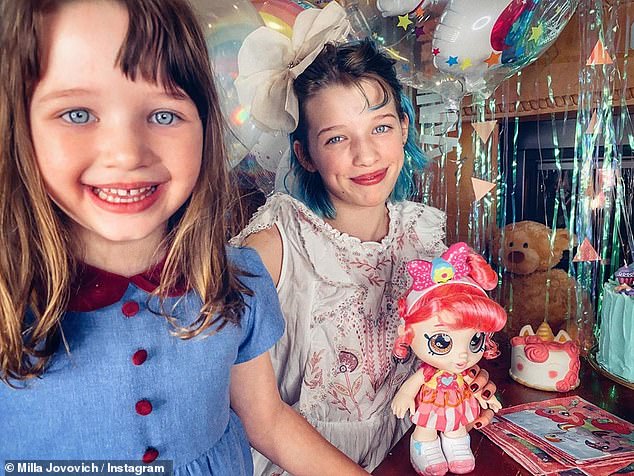 ‘When I think about the fact that women might have to face abortions in even worse conditions than I did because of new laws, my stomach turns. I spiraled into one of the worst depressions of my life and had to work extremely hard to find my way out.

I took time off of my career. I isolated myself for months and had to keep a strong face for my two amazing kids. I started gardening, eating healthier and going to the gym everyday because I didn’t want to jump into taking anti depressants unless I had tried every other alternative.

Thank God I was able to find my way out of that personal hell without turning to medication, but the memory of what I went through and what I lost will be with me till the day I die.’ 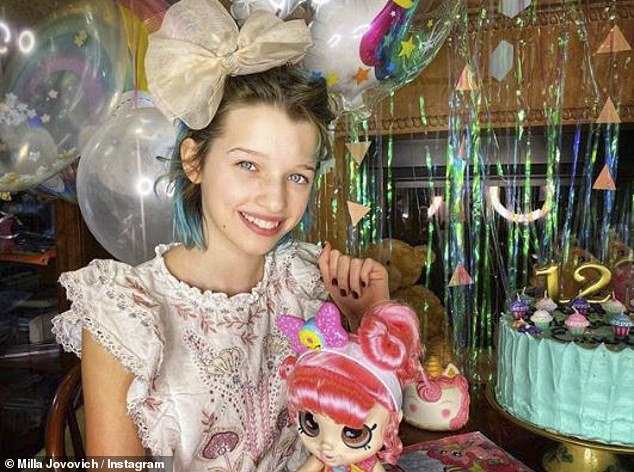 Beautiful: Ever is seen at her 12th birthday tea party in November