‘Resting my bones with a burrito in the bath!’: Myleene Klass kicks back with a takeaway in the tub after her shock elimination from Dancing On Ice

She was axed from Dancing On Ice at the weekend after her first ever skating duet with Łukasz Różycki.

And Myleene Klass treated herself to a well-earned ‘burrito in the bath’ in a fun snap posted to her Instagram page on Monday.

The presenter, 42, kicked back with her takeaway in the tub while soaking her muscles, as she reflected on no longer having to put in hours on the ice for the ITV reality show. 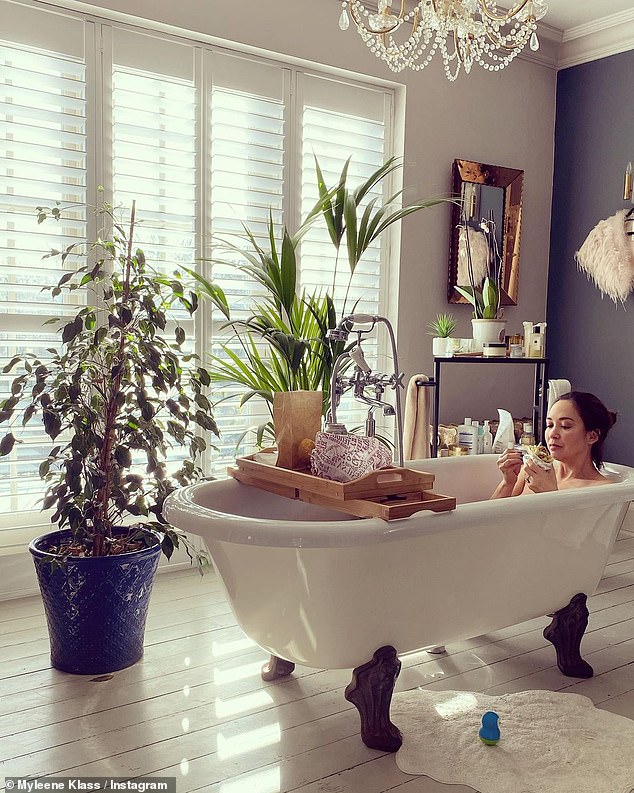 Pick me up: Myleene Klass treated herself to a well-earned ‘burrito in the bath’ in a fun snap posted to her Instagram page on Monday after her shock Dancing On Ice exit

Myleene used a bath tray to hold her takeaway order as she enjoyed a moments piece after her whirlwind skating journey.

In a lengthy caption, Myleene wrote: ‘Resting my bones on Doctors orders… with a Burrito in the Bath!!!

First day not on the ice in..forever. I wanted to thank the @dancingonice cast and crew.

‘The people who keep the show going at 2m’s apart, the ice rinks for trying so hard to give us ice time, the pros for their support, drive and the privilege of letting us share their world, the fearless and fun celeb skaters, many of us juggling mums, my mgt, friends, my family and my ice partner, @icelukasz. 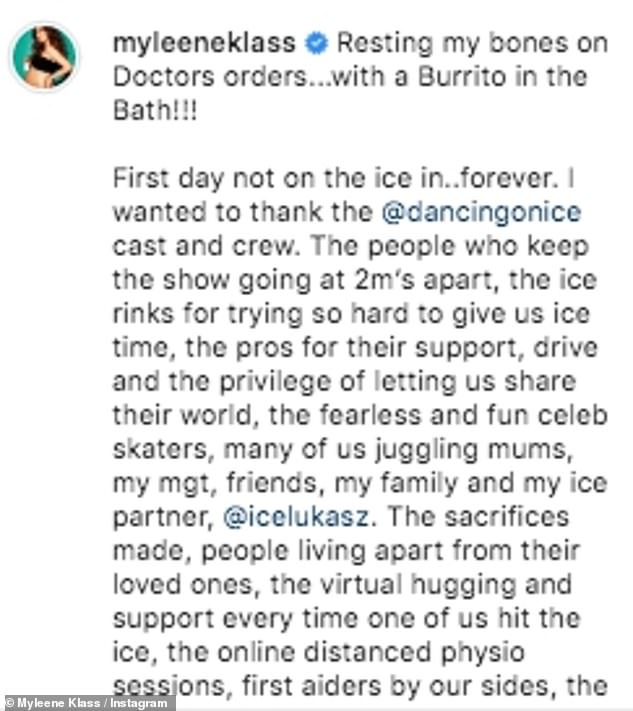 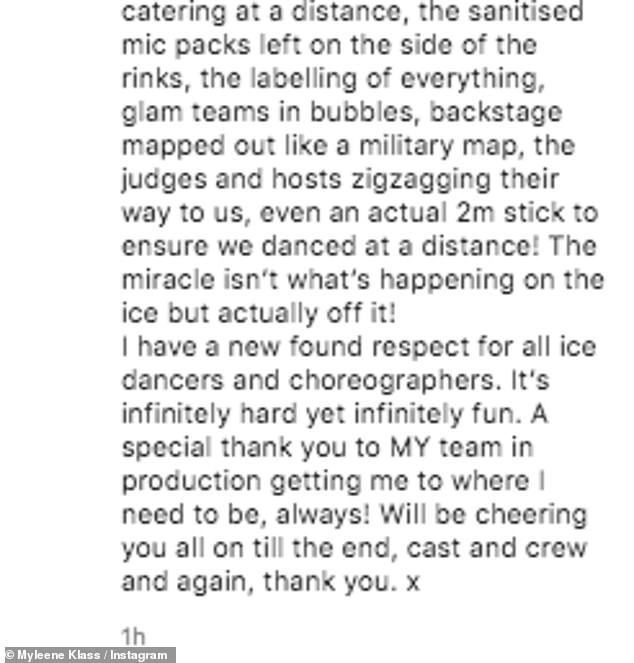 Yummy: In a lengthy caption, Myleene wrote: ‘Resting my bones on Doctors orders…with a Burrito in the Bath!’ 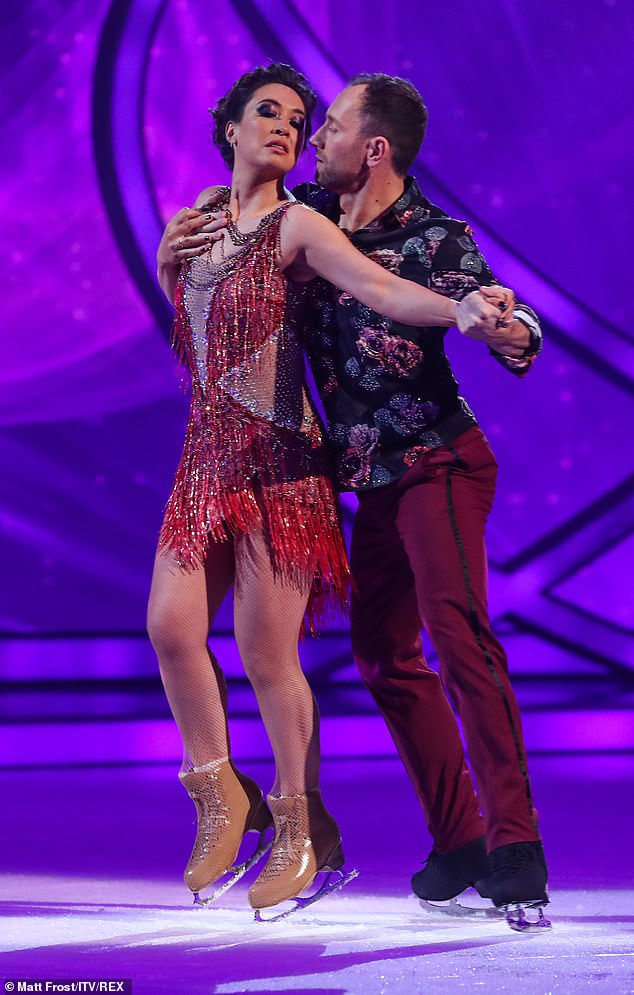 Departure: The presenter, 42, was axed from Dancing On Ice at the weekend after her first ever skating duet with Łukasz Różycki

‘The sacrifices made, people living apart from their loved ones, the virtual hugging and support every time one of us hit the ice, the online distanced physio sessions, first aiders by our sides, the catering at a distance, the sanitised mic packs left on the side of the rinks, the labelling of everything, glam teams in bubbles, backstage mapped out like a military map, the judges and hosts zigzagging their way to us, even an actual 2m stick to ensure we danced at a distance!

‘The miracle isn’t what’s happening on the ice but actually off it!

‘I have a new found respect for all ice dancers and choreographers. It’s infinitely hard yet infinitely fun. A special thank you to MY team in production getting me to where I need to be, always! Will be cheering you all on till the end, cast and crew and again, thank you. x’ 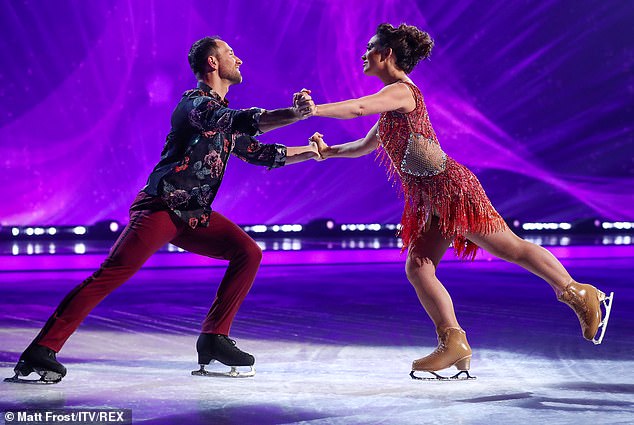 Oh dear: Myleene was fighting for her place in the competition – but it was not meant to be

Myleene was the first contestant to leave Dancing on Ice.

The Hear’Say singer and her professional dancing partner Lukasz exited the ITV show after losing in the skate off to Lady Leshurr and Brendyn Hatfield.

Speaking to hosts Phillip Schofield and Holly Willoughby, Myleene said: ‘I couldn’t have done it without Lukasz and my family.

‘I’ve never skated before so this is a skill I’ve learned in lockdown. When the rinks are back open, I will be there. To all the team here, it’s not been an easy production in lockdown so I feel really chuffed. I’m really happy. 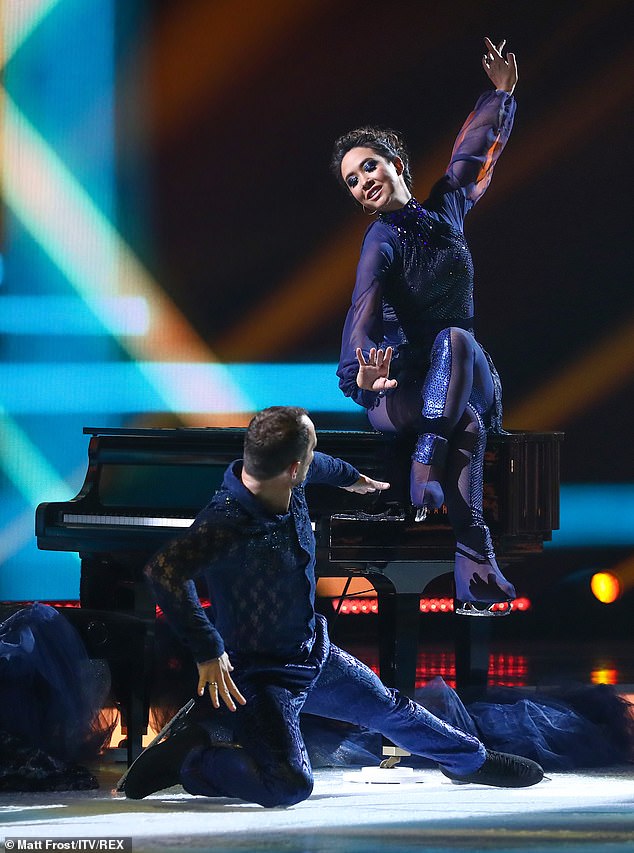 Over and out: After her initial skate, she stood before the panel and was awarded 22 points – the lowest of the night 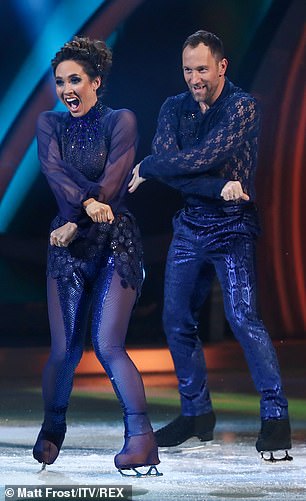 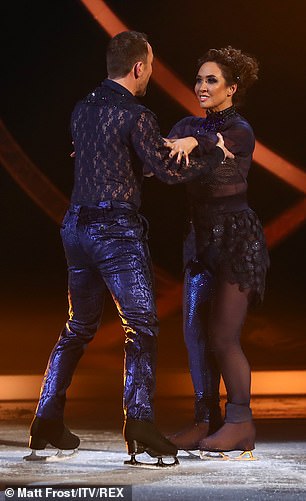 Oh dear: The pair showed off their best moves on the ice but were met with a chilly reception from the judges

Myleene found herself in the skate off against Lady Leshurr but the four judges – Ashley Banjo, John Barrowman, Christopher Dean and Jayne Torvill – decided to send Myleene home.

Ashley said: ‘The first skate off is never easy but I wanted to say, massive respect to both of you because I thought you both did amazing in the skate off. I’m going to go with who I think is the strongest skater and who had the better skate off performance. I’m saving Lady Leshurr.’

Whilst Christopher added: ‘The whole evening has been about the skating versus the performance. You both did great performances tonight but the best skaters were Lady Leshurr.’

Elsewhere, Sonny Jay was thrilled when he and professional Angela Egan got this week’s Golden Ticket, giving them a sure pass into next weekend’s Musicals week on the show.

Asked how he felt, he said: ‘Honestly I wasn’t expecting it. Thank you so much. I’m so chuffed with this and I’m going to come back for musicals’ week because I’ve got a banging number.;

Meanwhile, Faye Brookes and her professional partner Hamish Gaman wowed with their skating, earning them a huge 31.5 points and putting them top of the leaderboard.

Dancing On Ice returns to ITV next Sunday. 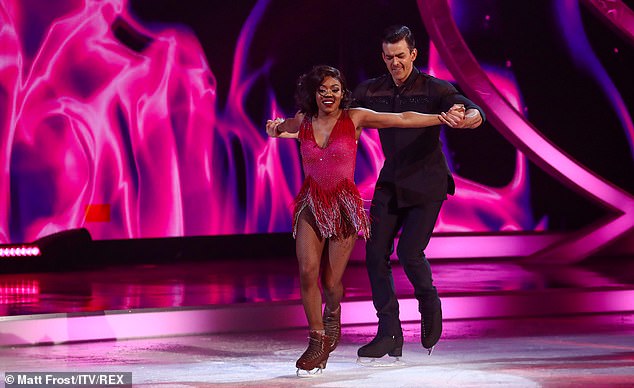 Good one, Lady! Lady Leshurr and Brendyn Hatfield are pictured in the skate-off