‘I’m 2st heavier’: Myleene Klass reveals she is ‘completely relaxed’ about her weight since having son Apollo and has been doing family lockdown workouts

Myleene Klass has revealed that she’s ‘completely relaxed’ about gaining two-stone since having her 11-month-old son Apollo.

The presenter, 42, spoke candidly about her weight and how she no longer minds what people think about her shape.

Speaking to The Sun Online, she also discussed how she indulged in ‘cocktails every night and cheese boards’ at the start of lockdown but quickly got exercising. 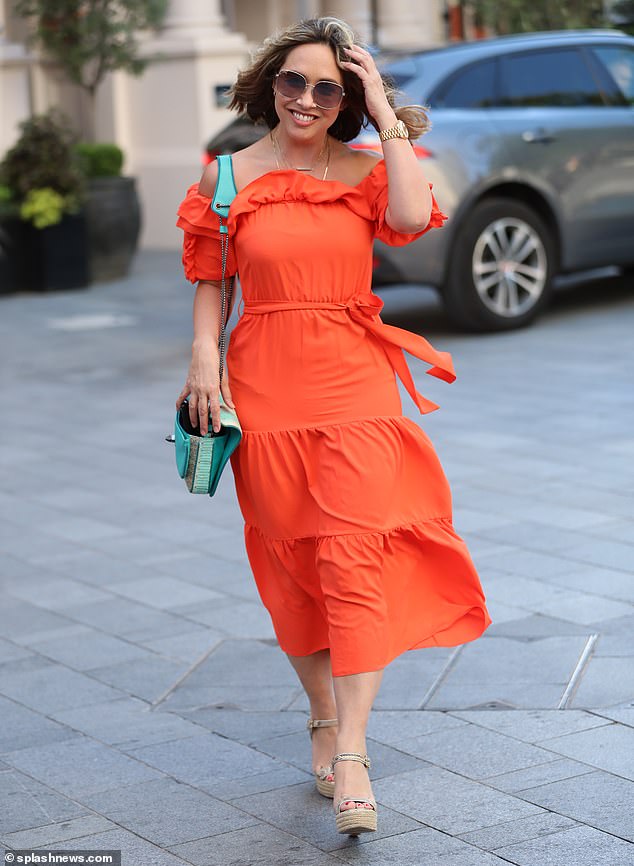 ‘Completely relaxed’: Myleene Klass, 42, has said she has put on two-stone since having her son Apollo but isn’t concerned about the extra weight

Myleene said: ‘This time round, with Apollo, I’m still 2st heavier than I was before pregnancy, but I feel completely relaxed about it.’

The mother-of-three admitted she wasn’t so laid back after having her girls, Ava and Hero, and did put pressure on herself to ‘get back’ to her pre-pregnancy self.

However Myleene said she stopped worrying about her looks when her husband Graham Quinn left her in 2013 as she had to focus on her girls.

Although not caring about how her looks are perceived anymore, Myleene has made sure to stay healthy by exercising regularly. 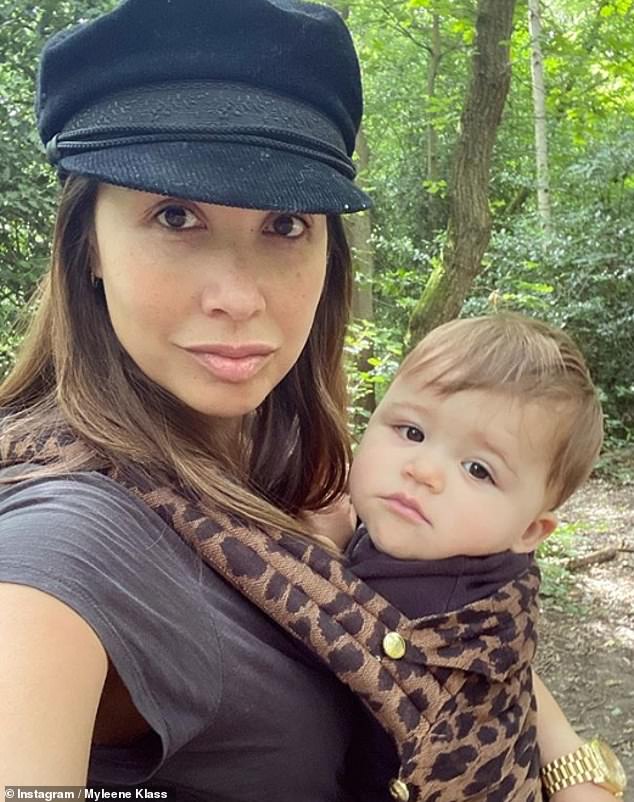 Mother and son: The presenter added that she’s been doing workouts three times a week with her family during lockdown but did indulge on cocktails and cheese boards at the start

She revealed that she’s been doing work outs with her family and has tried to teach her daughters that exercise has a good effect on the mind.

However the radio presenter’s time in lockdown wasn’t always so structured and she did admit to indulging a little at the start.

Myleene said: ‘We had cocktails every night, pie and cheese platters, stayed up late and just enjoyed it. Three weeks in, I was tired of that. I wanted green veg, better sleep and regular exercise.

‘I hate working out alone, so we’ve been doing it as a family three times a week.’ 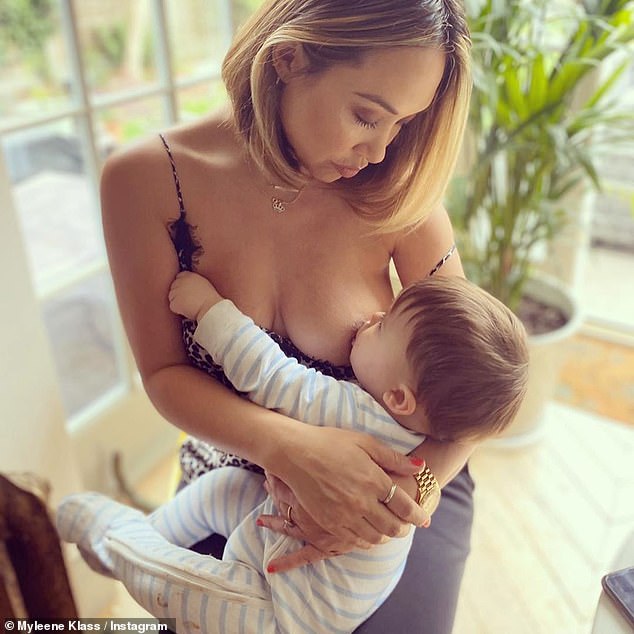 Hitting back: Myleene also discussed having to defend her breast-feeding photos, saying she will not cover up Apollo while he feeds 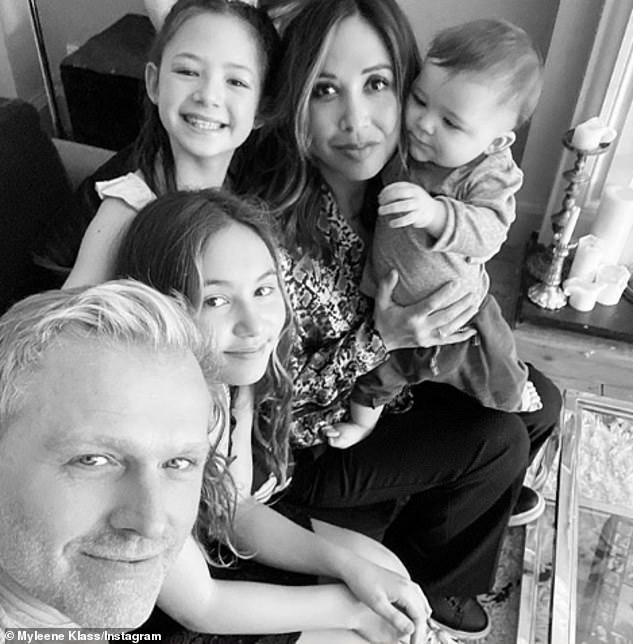 Closer than ever: Myleene has been spending lots of time with her family during lockdown

Myleene explained how she set up different areas for the family to try out, such as skipping or boxing.

The mother-of-three also spoke about breastfeeding her youngest child and her surprise at peoples reactions to snaps of her feeding Apollo.

Myleene said she’s received comments asking why she is posting ‘topless’ images, even though her baby is clearly feeding in them.

Although now being confident to share these snaps, Myleene revealed that she wasn’t so confident when her daughters were little. 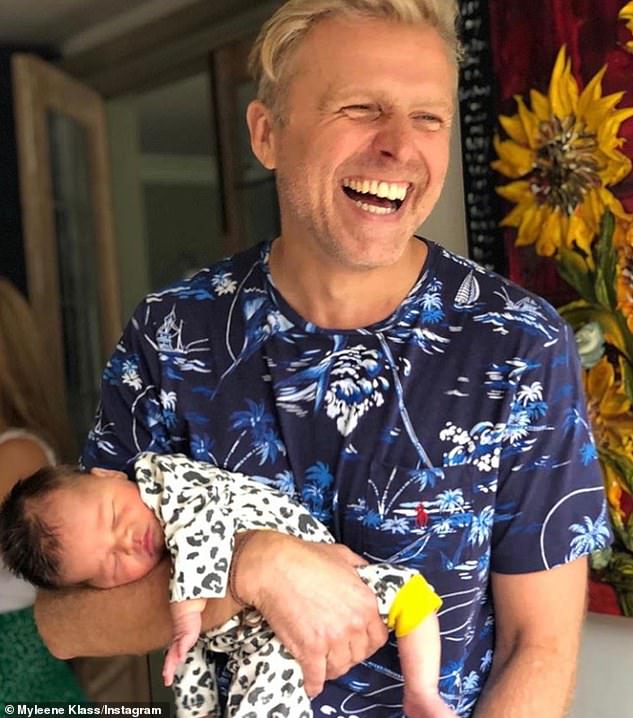 Sweet: The mother-of-three revealed that the whole family (pictured Apollo and Simon) have been working out together to keep entertained during lockdown

She told the Sun that she used to cover Ava with a muslin cloth but that she wouldn’t do that now, adding if people are offended ‘it says more about them than it does me.’

It comes after Myleene helped organise a birthday party for her pal Kate Garraway’s son.

Kate thanked Myleene and Roman Kemp, 27, for helping with Billy’s 11th birthday bash as the ’emotional’ star admitted she ‘didn’t want to let him down.’

Taking to Instagram late on Saturday night, the GMB host shared a series of videos and photographs along with lengthy captions to express her gratitude as she gushed that ‘Derek will be so proud and pleased!’. 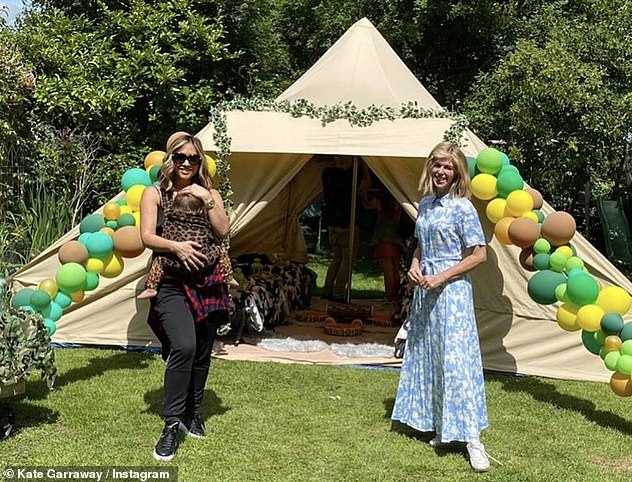 Thankful: On Saturday, GMB host Kate shared videos and photographs along with captions to express her gratitude for Myleene as she gushed that ‘Derek will be so proud and pleased!’ 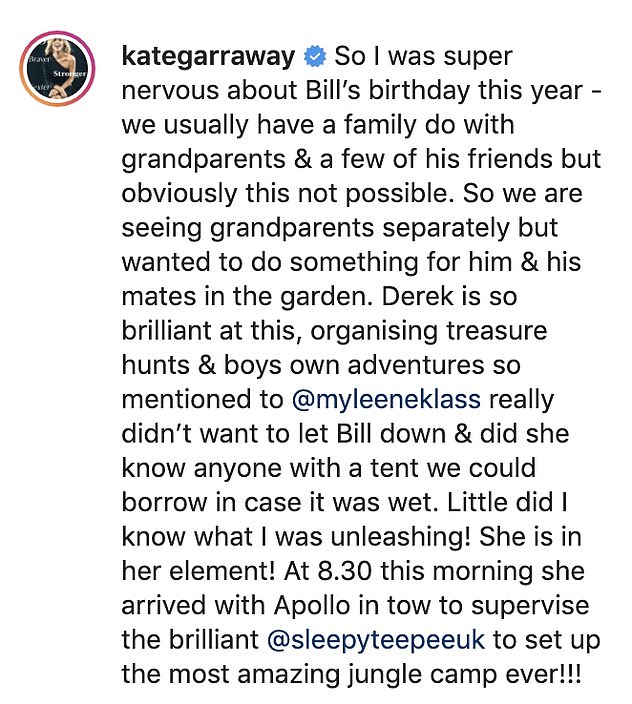 Nervous! Beginning with a socially-distanced photograph of herself and Myleene standing outside the garden arrangement, Kate wrote a message of thanks alongside

Beginning with a socially-distanced photograph of herself and Myleene standing outside the garden arrangement, Kate wrote a message of thanks alongside.

‘So I was super nervous about Bill’s birthday this year – we usually have a family do with grandparents & a few of his friends but obviously this not possible.

‘So we are seeing grandparents separately but wanted to do something for him & his mates in the garden.

‘Derek is so brilliant at this, organising treasure hunts & boys own adventures so mentioned to @myleeneklass really didn’t want to let Bill down & did she know anyone with a tent we could borrow in case it was wet. 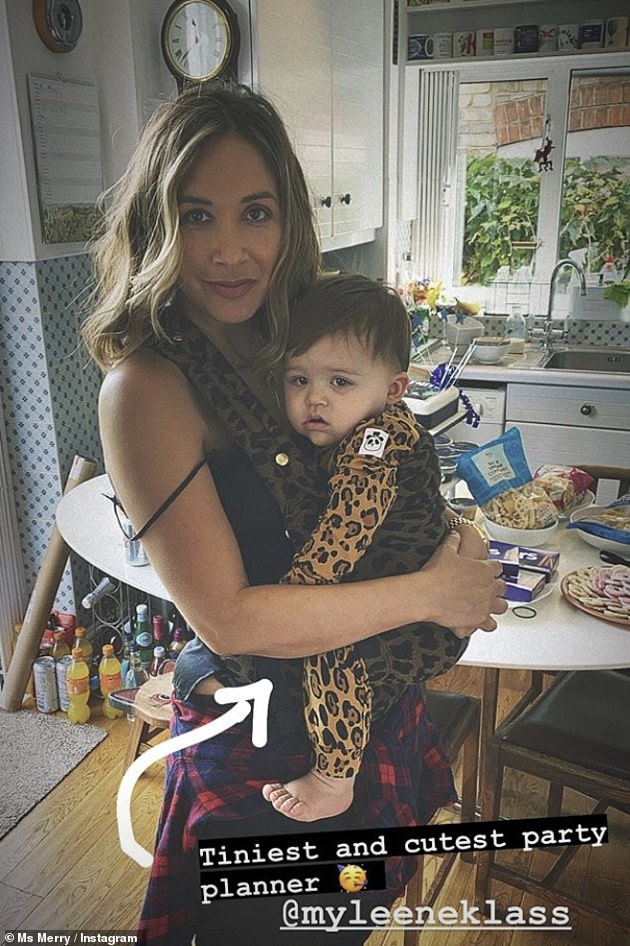 Cute! Myleene, who organised the garden party for Billy, dressed her own son – baby Apollo, 11 months – in animal print for the socially-distanced event

‘Little did I know what I was unleashing! She is in her element! At 8.30 this morning she arrived with Apollo in tow to supervise the brilliant @sleepyteepeeuk to set up the most amazing jungle camp ever!!!’

Bill’s birthday is on July 28, but the former Hear’Say singer took it upon herself to organise an early bash for him, with the help of her boyfriend Simon Motson and her two daughters Ava, 12, and Hero, 9.

Myleene organised for a large tent to be erected in the garden, and opted for a mix of green, yellow and brown balloons.

In addition to a Fortnite themed birthday cake, the youngster was also treated to two tiers of matching cupcakes. 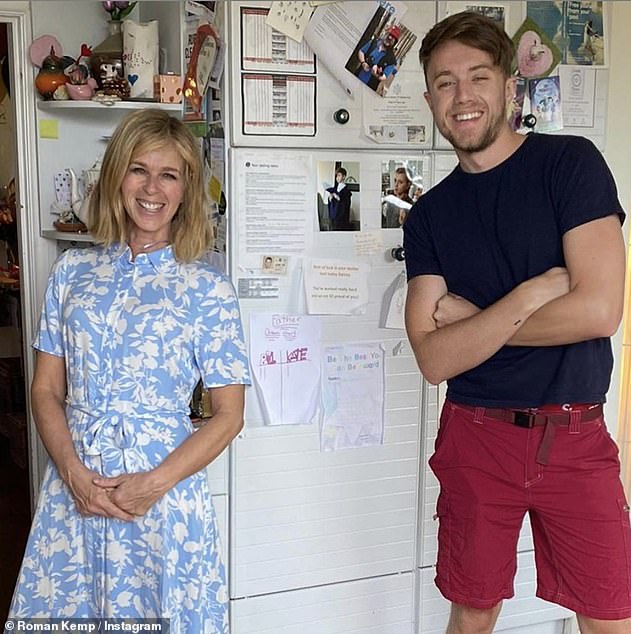