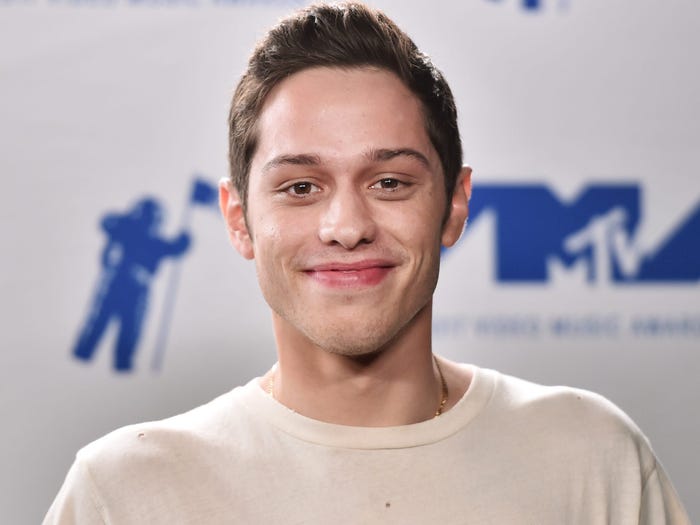 Pete Davidson's grandfather, Stephen "Poppy" Davidson, made a brief cameo as the protagonist's sharp-tongued grandpa in "The King of Staten Island," a semi-autobiographical film loosely based on the comedian's life in the New York City borough.

Even though Pete hadn't been on set with his grandfather before, the experience induced a sense of nostalgia for the comedian. Because long before he became one of the youngest "Saturday Night Live" cast members in history and cowrote a major film, Pete was the star of his grandfather's home movies.

"Me and Poppy have been working together since I was like 4 or 5," Pete recently told Insider while discussing his partnership with Amazon and promoting the Echo Show.

He continued, "We used to make home movies, maybe even younger. We did that until I was in my teens."

Growing up in Staten Island, Pete's mother, Amy Davidson, worked as an emergency nurse and his father, Scott Davidson, was a firefighter. Pete was only 7 when Scott died in the 9/11 attacks, so he spent a lot of time with his paternal grandfather.

The comedian's career took off when he became an "SNL" cast member at 20 years old. Six years later, he had an opportunity to star in "The King of Staten Island," which he cowrote with Judd Apatow and Dave Sirus.

In the film, Pete and Stephen played versions of themselves, while actors Marisa Tomei and Maude Apatow portrayed characters loosely based on Pete's real mother, who's featured as an extra in the film, and his younger sister, respectively.

"Luckily, I was able to get a movie a year ago, and we got to work together on a real set, which was really surreal and just a great, complete full circle thing," Pete told Insider.

The cinephile, who has a large collection of movies in his home, played the lead character's grandfather. During his cameo, Stephen cracks jokes at his granddaughter's college sendoff party, telling her that universities groomed individuals like Ted Kaczynski (the Unabomber), Bill Cosby, and Donald Trump.

Pete said the entire cast was impressed by his grandfather's performance, sharing they got a "kick out of how great his voice is and how great his comedic timing is."

"It's just fun to be able to work together, and we get to hang," Pete added.

Beyond the excitement of shooting his first movie, Stephen said he valued the opportunity to be with his grandson.

"Any time I can spend with my grandson, I love. I always have a great time. And this was even more so because I had never been in a movie before or been on a set," he told Insider.

"The King of Staten Island" premiered in June, but the pair has continued to use film as a way to stay connected during the pandemic.

"We send each other movies to watch," Pete explained. "He'll recommend stuff with Errol Flynn and Ernest Borgnine and stuff from the '40s to the '70s. And then I send him 'Harold and Kumar Christmas.' We swap opinions."

As part of their partnership with Amazon, Pete and Stephen released several never-before-seen home videos from the comedian's childhood in a video promoting the Echo Show.

They also announced that Amazon is donating $1 million worth of Amazon devices to organizations supporting first responders. One of the organizations is Answer The Call, a fund that supported Pete's family in the aftermath of his father's death.

"We wouldn't have been able to get through that time without their help," Pete said, adding, "Another full circle thing is just to be able to help out in any way possible to those types of organizations."