Chrissy Teigen flashed her baby bump as she posed for a holiday family photo she shared in a new Instagram photo series on Saturday.

The TV personality, 37, donned a partially buttoned holiday-themed sweater while her husband and singer, John Legend, 43, also joined in on the fun by sporting a Christmas tree hoodie.

The couple, who tied the knot in 2013, also took the photo with their two children, Luna, 6, and Miles, 4, shortly before they welcome another addition to the family early next year. 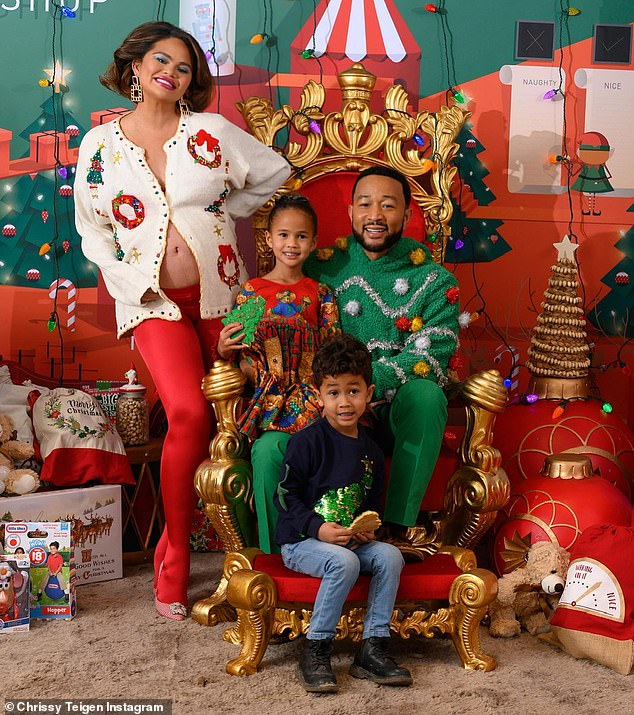 Holiday family photo! Chrissy Teigen, 37, uploaded an adorable photo of herself, her husband John Legend, and their two children posing for holiday snap together

Chrissy flaunted a model pose wearing a cream-colored sweater with holiday embellishments embroidered on the fabric, such as wreaths and decorated trees.

She chose to leave the sweater partially open to showcase her growing baby bump, after announcing in August that she was expecting another child.

The Cravings By Chrissy Teigen founder slipped into a pair of vibrant, red leggings to fully embrace the Christmas theme at the holiday bash.

She completed her look by donning a pair of nude-colored, rhinestone heels for a dazzling touch. 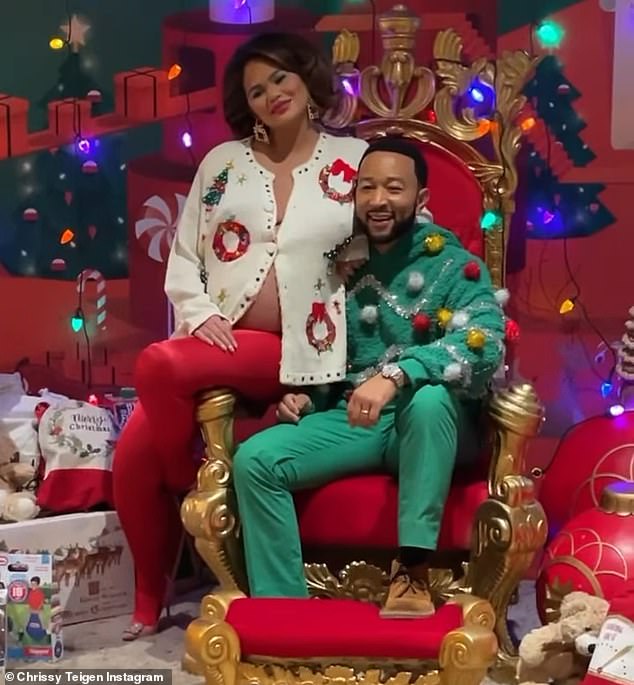 Getting festive! The two lovebirds humorously donned ugly Christmas sweaters to fit the theme of the holiday event 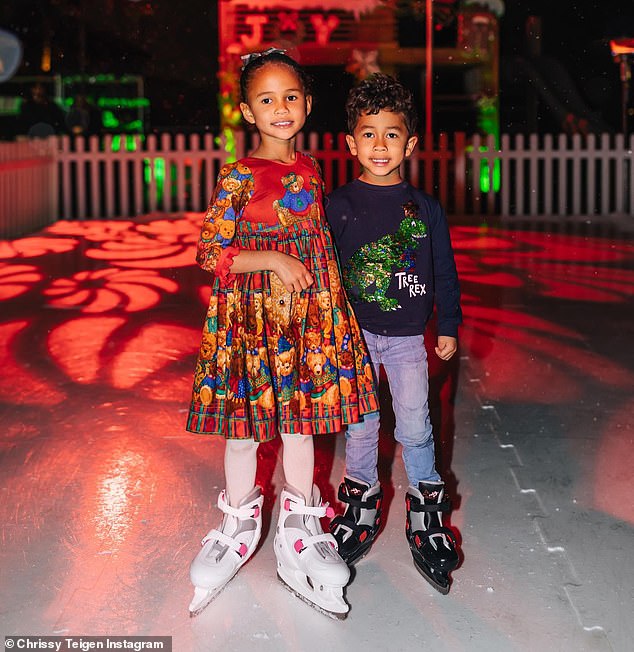 Having fun! The star also shared a photo of her daughter, Luna, and son, Miles, as they stepped outside to ice skate

Chrissy’s hair was teased into a retro style, and showed off a pair of flashy, multi-colored earrings. The beauty added bright blue eyeshadow and an eye-catching, pink lipstick for a finishing touch to her overall ensemble.

The All Of Me singer’s sweater embodied a green Christmas tree with soft ornaments and silver garland placed throughout the fabric. He also slipped into a pair of green pants and tan shoes.

He cheerfully posed for a number of photos while sitting on an ornate, red and gold chair with a matching foot stool.

In the cute family photo, Luna, who donned a teddy bear dress, sat next to her father, while Miles sat on the stool in front of John. He also got into the spirit and wore a Tree Rex Christmas sweater.

Luna and Miles were also seen holding decorated cookies in their hands for the quick photo. An assortment of glowing lights, toys, and large decorations surrounded the family as they posed for a memorable photo session. 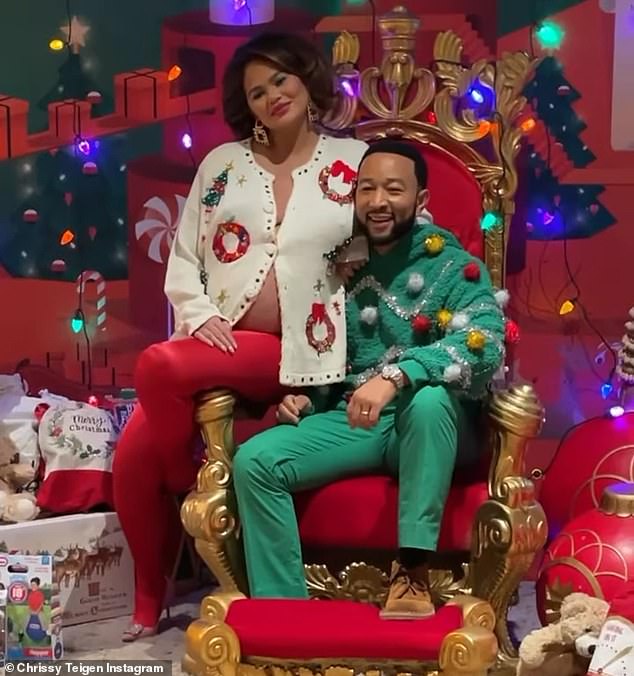 Adorable: Chrissy also shared a Boomerang video of herself and John posing for photos together 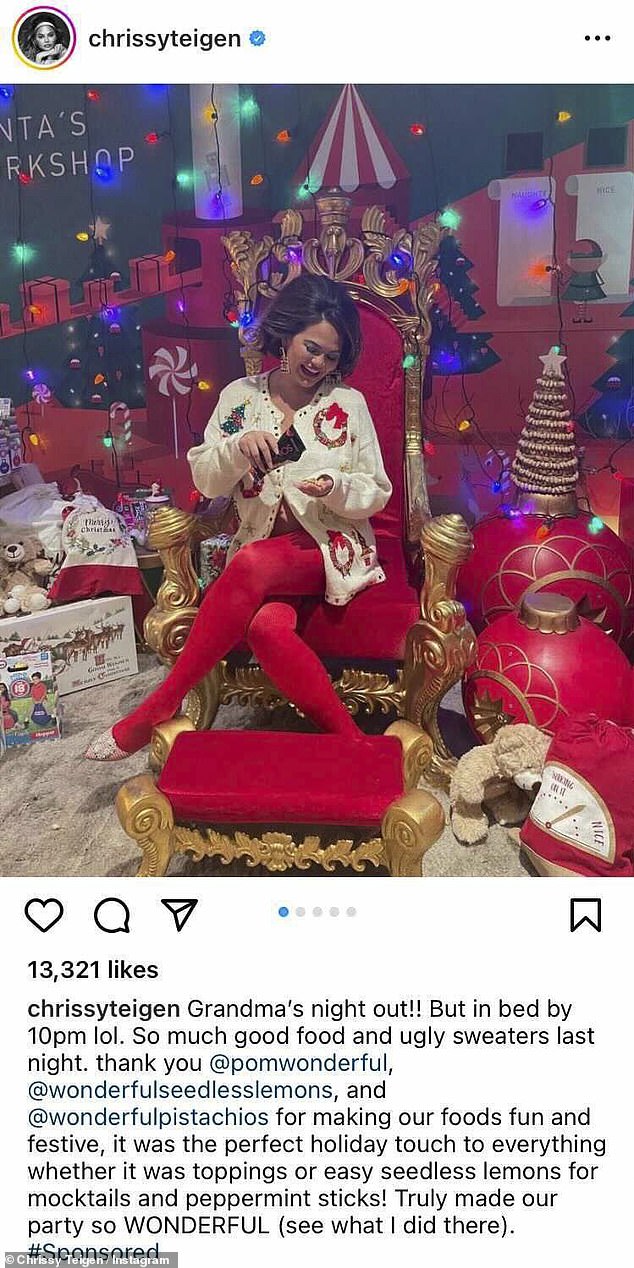 Special event: Earlier on Friday, the actress and model uploaded a previous photo series from the ‘ugly’ sweater event to celebrate the holiday season

The second snap she shared in the photo series showed her daughter and son trying out ice skating together outside. The two siblings each slipped into skates to test out their skills.

Chrissy lastly uploaded a Boomerang video of herself and John posing for a few loving photos together.

In the caption of the holiday-themed post, the TV personality simply added a Christmas tree and two red heart emojis.

Earlier on Friday, the actress shared a photo series of herself wearing the same outfit at the ‘ugly’ sweater themed party. She had jokingly penned, ‘Grandma’s night out!! But in bed by 10pm lol. So much good food and ugly sweaters last night.’ 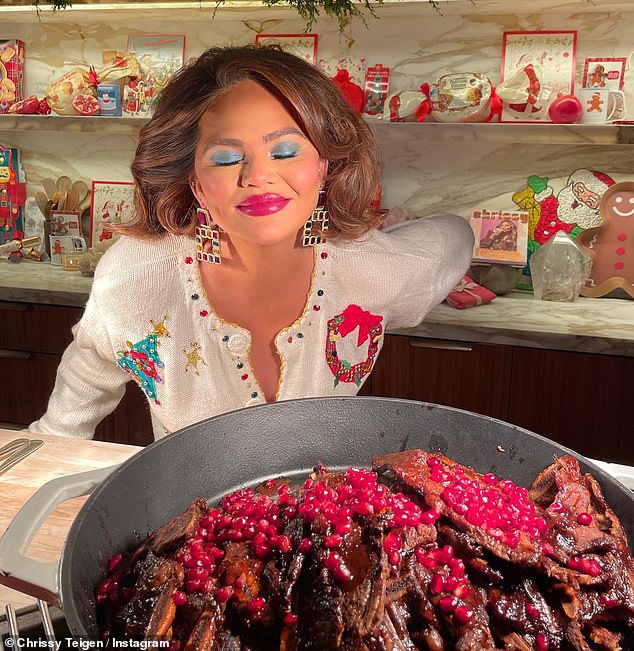 ‘Night out’: In the caption of the post she shared on Friday, Chrissy had penned, ‘Grandma’s night out!! But in bed by 10pm lol. So much good food and ugly sweaters last night’ 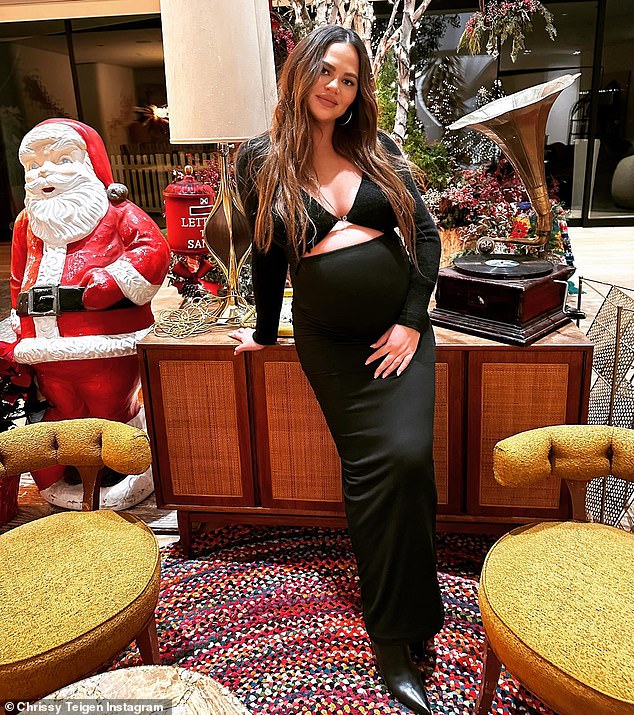 Baby on the way! Chrissy announced she was expecting another child earlier in August on Instagram

Chrissy revealed in August on Instagram that she was expecting her fourth child with husband, John. The couple tragically lost their son, Jack, in 2020 following complications during her pregnancy.

At the time of announcing the baby news, the star had written to her followers that, ‘the last few years have been a blur of emotions to say the least, but joy has filled our home and hearts again.’

She explained that, ‘1 billion shots later (in the leg lately, as u can see!) we have another on the way,’ later adding, ‘…so far, everything is perfect and beautiful and I’m feeling hopeful and amazing.’

During an interview on Sunday Today With Willie Geist in September, John opened up bringing another child into their growing family.  He explained that both himself and Chrissy have, ‘cautious optimism especially when you’ve lost one before. But we really feel excited.’

He expressed that he felt they have ‘learned so much over the years,’ and that, ‘we’re ready. We’re ready for a new baby in our lives.’