Ringo Starr, 81, beams while flashing his iconic peace sign ahead of appearance on Jimmy Kimmel Live!

When it comes to true rock and roll royalty, it doesn’t get much bigger than The Beatles.

And Ringo Starr sent fans into a frenzy as he made his way to the El Capitan theater ahead of his appearance on Thursday’s episode on Jimmy Kimmel Kimmel Live!

And in true Ringo style, the 81-year-old drummer couldn’t resist flashing the iconic, two-finger peace sign, which has becomes a trademark of his own over the decades, before heading inside. 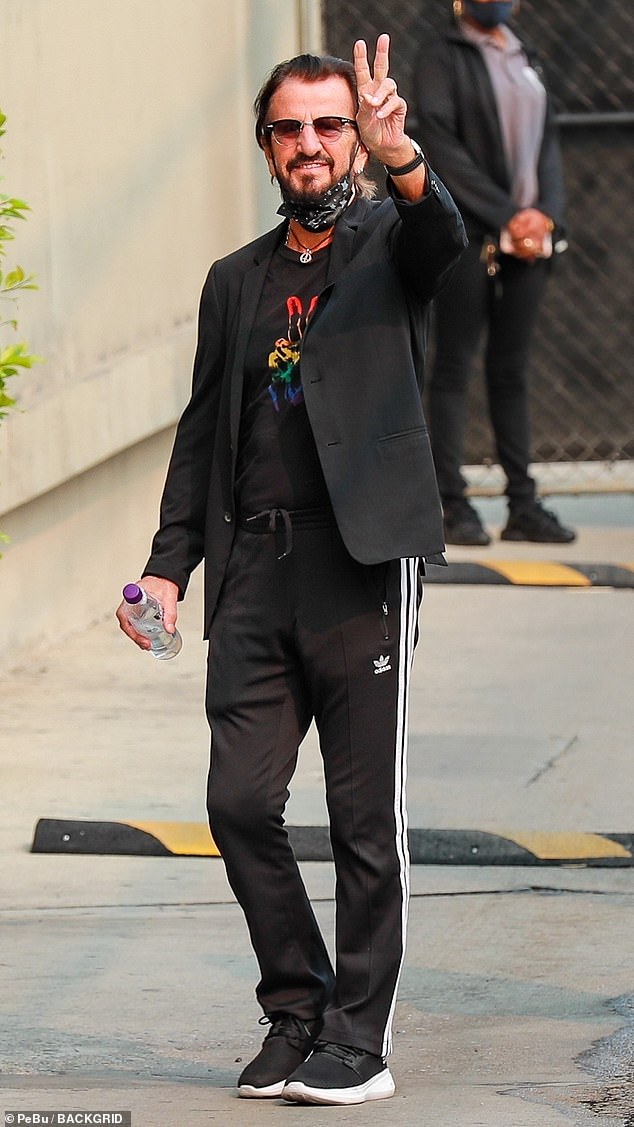 Fanfare: Ringo Starr sent fans into a frenzy as he made his way to the El Capitan theater ahead of his appearance on Thursday’s episode on Jimmy Kimmel Kimmel Live!

He also wore black sneakers and accessorized with a couple of rings, which was the inspiration for his nickname Ringo, and a black necklace with a silver peace symbol.

The With A Little Help From My Friends singer rounded out his rock ‘n’ roll style with a pair of black and silver frame sunglasses, a full beard and mustache, and his dark hair pushed back off of his face. 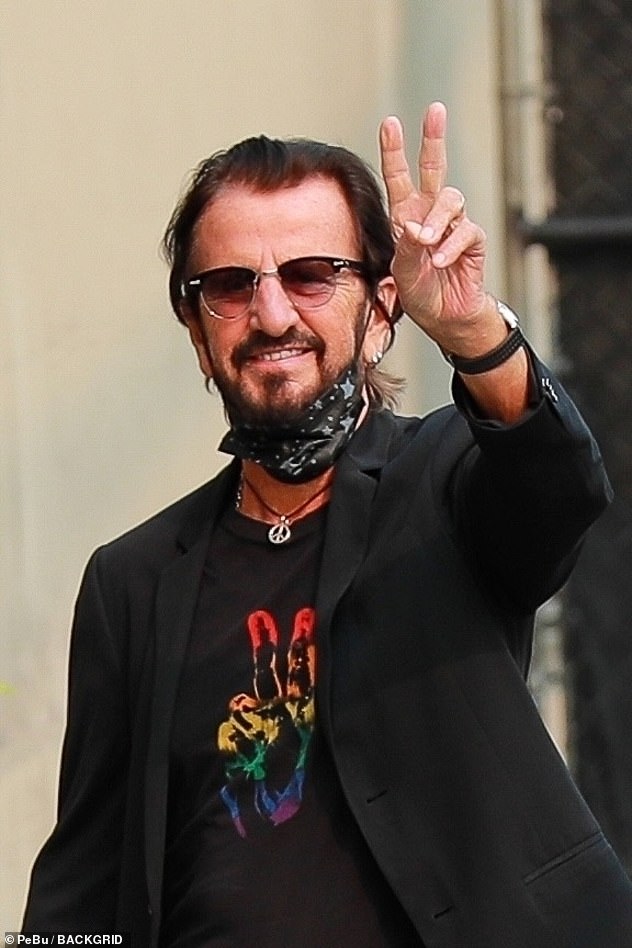 Signature: And in true Ringo style, the 81-year-old drummer couldn’t resist flashing the iconic, two-finger peace sign, which has becomes a trademark of his own over the decades, before heading inside

And with COVID-19 still very much a danger, he had a face covering around his neck, so he can promptly use it to cover his mouth and nose at a moments notice, whenever he came in the vicinity of others.

In fact, while taking the short stroll from his vehicle to the entrance door, Starr did exactly that, and put the black-patterned fabric on his face before coming in close distance with security members who were scattered around the studio lot.

Despite being 81, Starr seemingly has no plans of slowing down.

Just this past December he released the song Here’s To The Nights as the lead single to his EP, Zoom In, which dropped in March 2021, and was recorded at his home studio, beginning soon after the coronavirus crisis was deemed a pandemic last year. 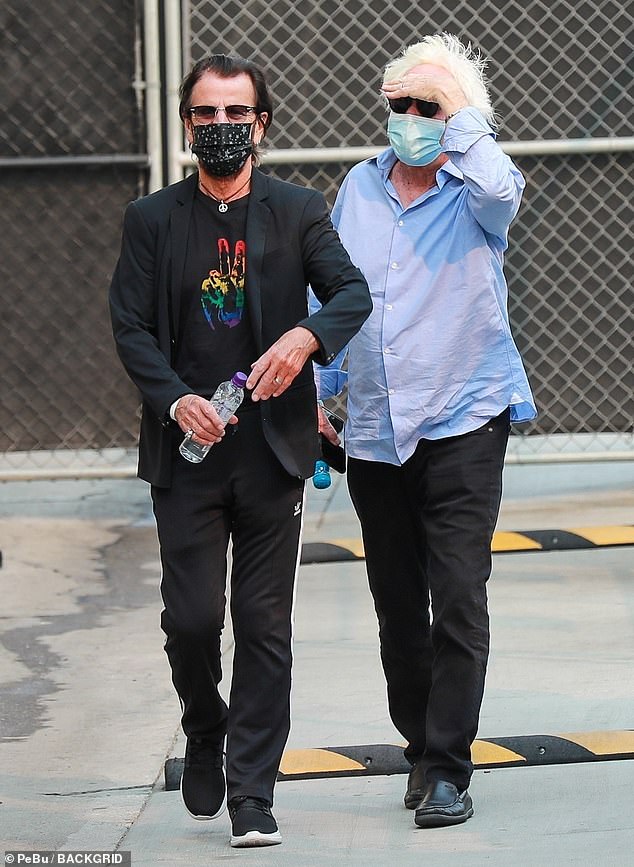 Bust times: Starr, 81, is set to release the EP, Change The World, which is his second EP release of the year; both recordings were done at his home studio, which was made possible, in part, due to his All-Star Band being sidelined out the road by COVID-19

Wasting little time, and wanting to keep busy while his All-Star Band had been sidelined due to COVID-19, Starr is set to release his second EP of the year, Change The World.

This time he has invited some new friends to take part in the recording.

‘I’ve been saying I only want to release EPs at this point and this is the next one,’ Starr told NME, adding, ‘What a blessing it’s been during this year to have a studio here at home and be able to collaborate with so many great musicians, some I’ve worked with before and some new friends.

The four-song EP has the lead single, Let’s Change The World, which was written by Toto members Joseph Williams and Steve Lukather, who also perform on the track. 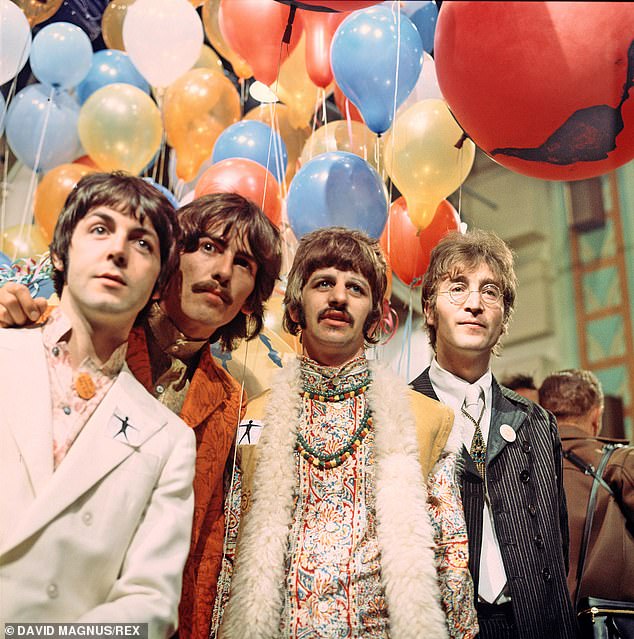 Icons: Starr sang several iconic songs by The Beatles, including With A Little Help From My Friends, Octopus’s Garden, Yellow Submarine and  Don’t Pass Me By; the British rock band is widely considered the most influential musical artists of all time; Starr is seen with bandmates Paul McCartney, George Harrison and John Lennon in 1967