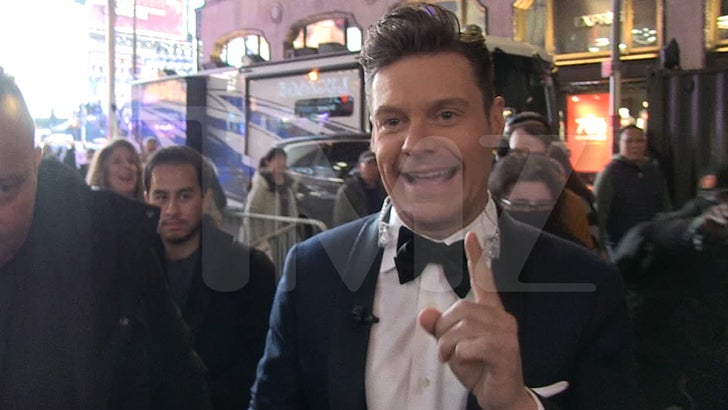 Ryan Seacrest will be sober as a bat when the clock strikes midnight later this evening — a rule he’s imposing on himself amid CNN’s widely-reported alcohol ban for their NYE hosts.

We ran into the ‘AI’ alum Saturday on the streets of NYC — this as he was getting ready to go through the marathon that is his annual gig with ABC … namely, emceeing “Dick Clark‘s New Year’s Rockin’ Eve” and helping Disney ring in 2023, which he’s done for a while now.

Of course … we had to ask the guy about his drinking regimen for the night, especially after he publicly sided with CNN brass this week about limiting the network’s on-air boozing.

In light of that, Ryan tells us he won’t be imbibing heavily while working. In fact, he says he’s gonna save the good stuff ’til well after 12:00 AM, presumably when he’s off camera. It’s interesting he says that … it would seem Ryan firmly believes in keeping things professional.

It’s a bit ambiguous whether that’s a shot at Anderson Cooper/Andy Cohen and the rest of the CNN team — who have a rep for downing shots during their broadcast — but when we asked RS if there was any shade … he suggested it was all love for everyone in his position.

While Ryan will be steering clear of booze through most of tonight, all eyes will be on CNN to see if they follow the orders they’ve been given … or if they cut loose like years past.