Travis Barker’s ex Shanna Moakler turned up the heat with her boyfriend Matthew Rondeau as she frolicked around in a bikini and packed on the PDA.

The 45-year-old former model seemed to show the Blink-182 drummer what he was missing after he gushed over his new relationship with Kourtney Kardashian yesterday.

Despite dating Rondeau, Moakler has been taking swipes at her ex’s new relationship for weeks now by liking disparaging comments on social media. 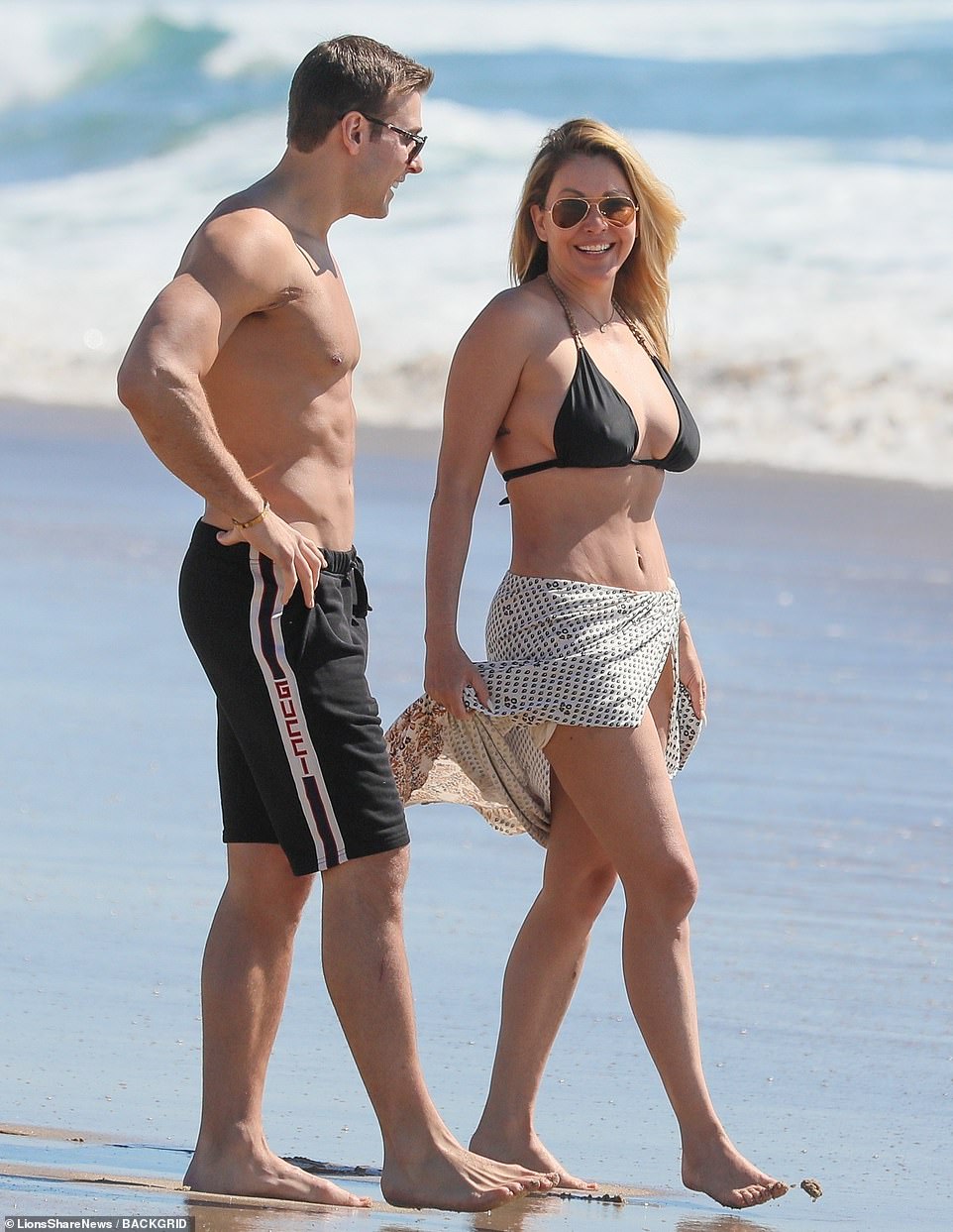 Showing off: Shanna Moakler, 45, shows her ex Travis Barker what he’s missing as she frolics on the beach in Malibu in a black bikini while packing on the PDA with boyfriend Matthew Rondeau

Just ahead of her 46th birthday — which she plans to celebrate with many bikinis in Mexico — Moakler strolled with her model boyfriend, 28, on the beach in Malibu.

She showed off her incredible figure after dropping 40 pounds last year, pairing the black string bikini with a sarong skirt.

The mother of three was all smiles as she dipped her toes in the water, before planting a kiss on her beau following loads of hand-holding.

The pair have been dating for about a year but fans grew suspicious they had broken up in mid-January when she posted thirst trap bikini photos with cryptic captions about revenge, later writing ‘I’ll see you in another life when we’re both cats.’ 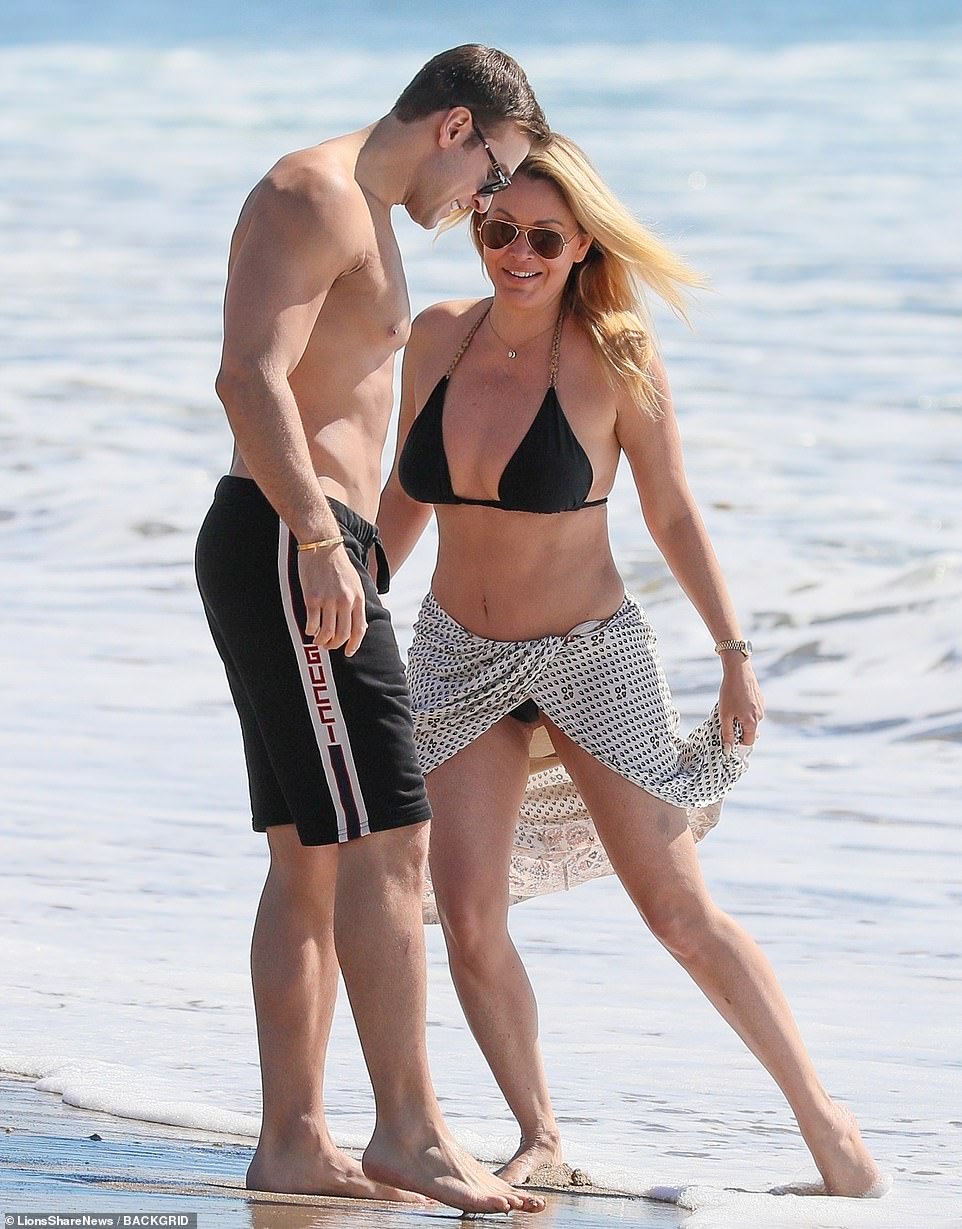 Younger man: She has been dating the 28-year-old model-actor for nearly a year now 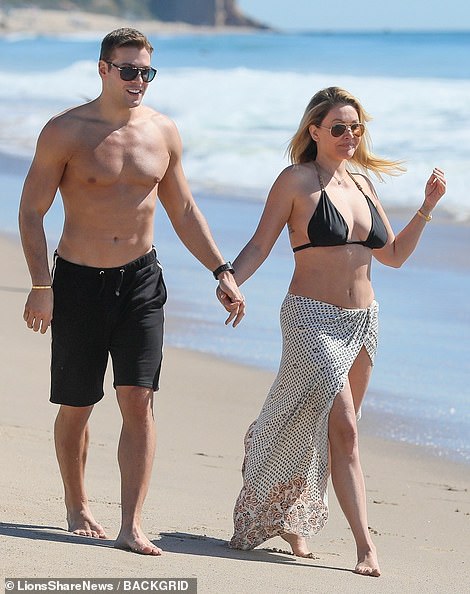 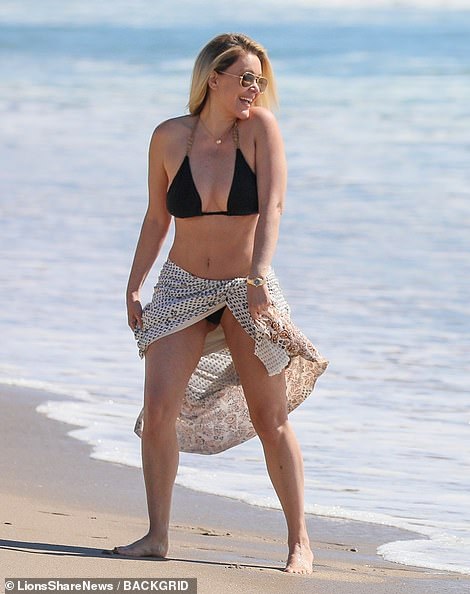 All smiles: Despite looking happy in her relationship, she has been taking swipes at Barker’s new relationship with Kourtney 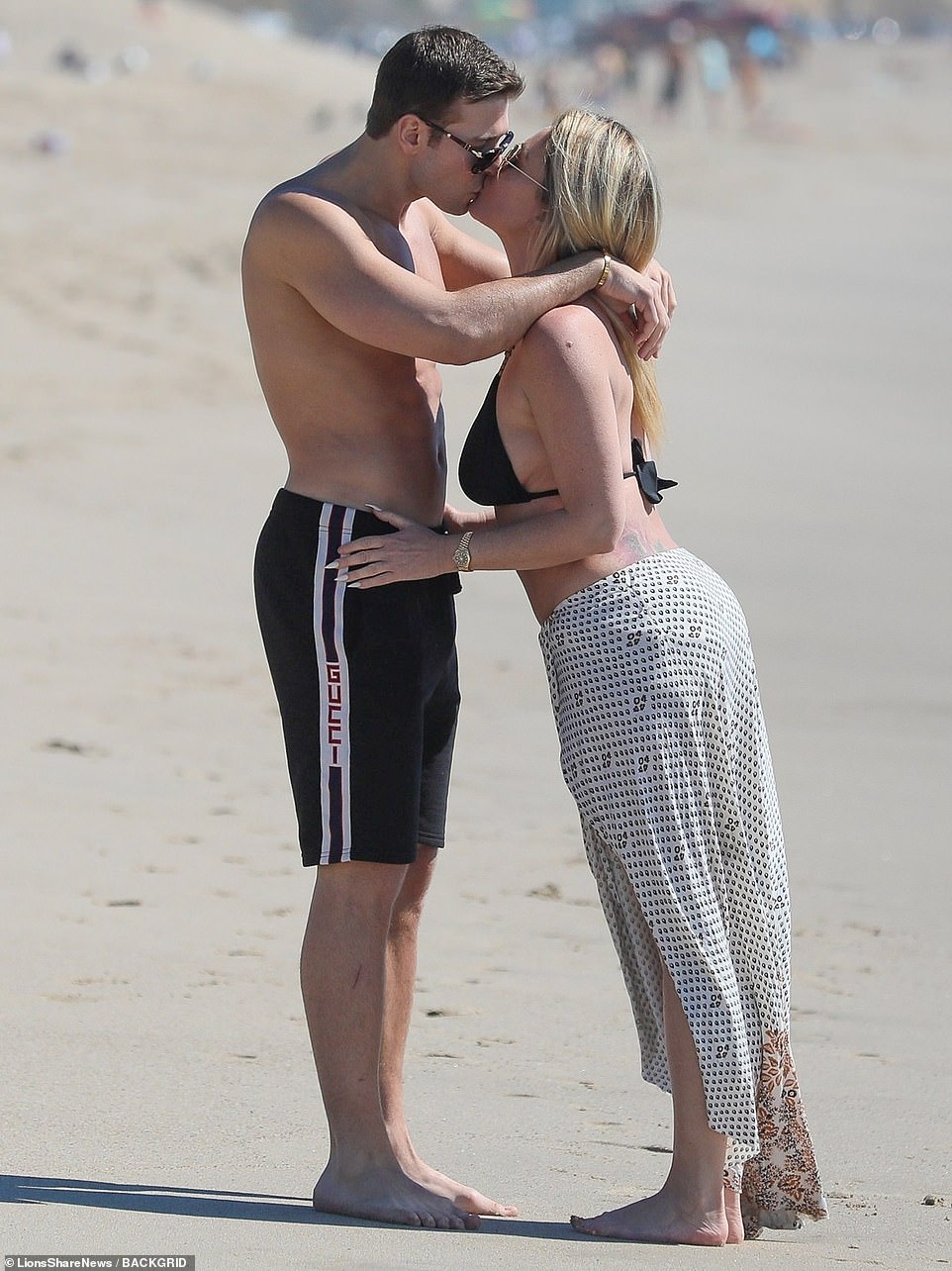 Back on: Fans grew suspicious they had broken up in mid-January when she posted thirst trap bikini photos with cryptic captions about revenge, but they seem to be back on 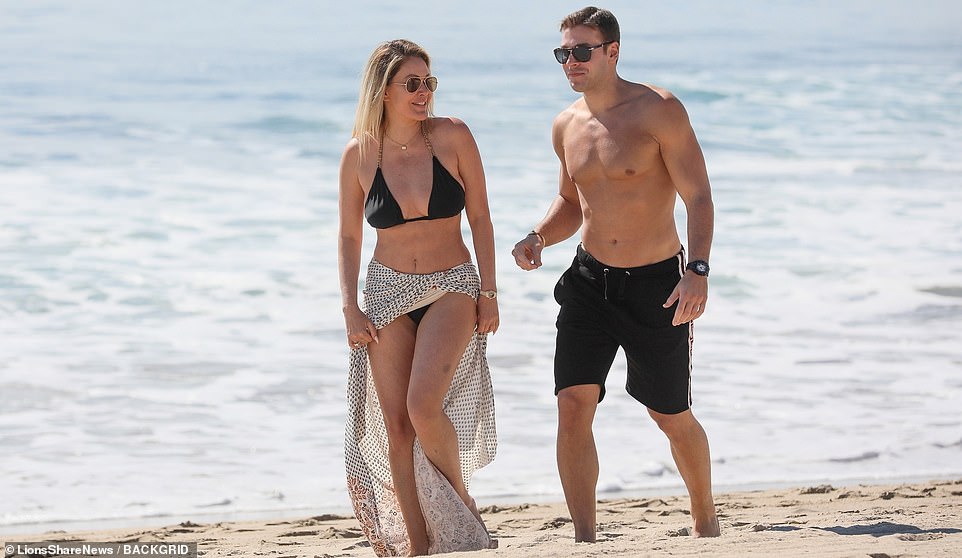 On the record: The Playboy model tried to say that she never meant to like any hurtful comments against Kourtney on her Instagram calling it a ‘complete accident’

Though the pair seem to be very much together, she still has been consumed with Kourtney and Travis since they confirmed their relationship around Valentine’s Day following months of suspicion.

In February Moakler seemed to convey nothing but support for the pair, telling Page Six: ‘He’s my friend and co-parent, and I want him to be happy…and if being with her makes him happy, and she’s happy, I’m happy for both of them, honestly.’

Despite her public statement, she had been involved in some petty social media exchanges, which she later tried to clarify. 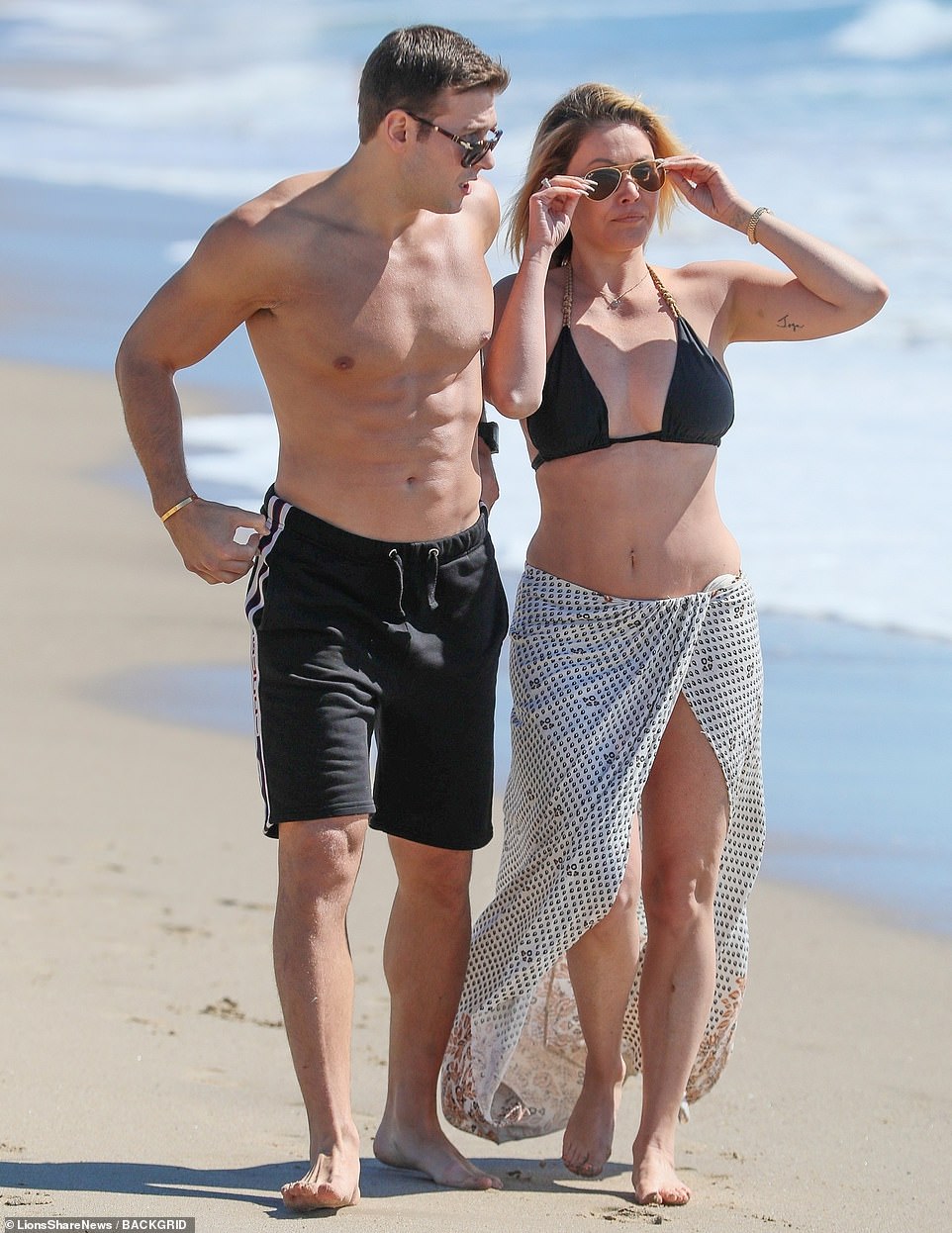 Throwing shade: One fan commented on a photo of her, ‘Shhhhiiiii that broad don’t got nothin’ on you. Travis downgraded big time,’ which Shanna ‘liked.’ 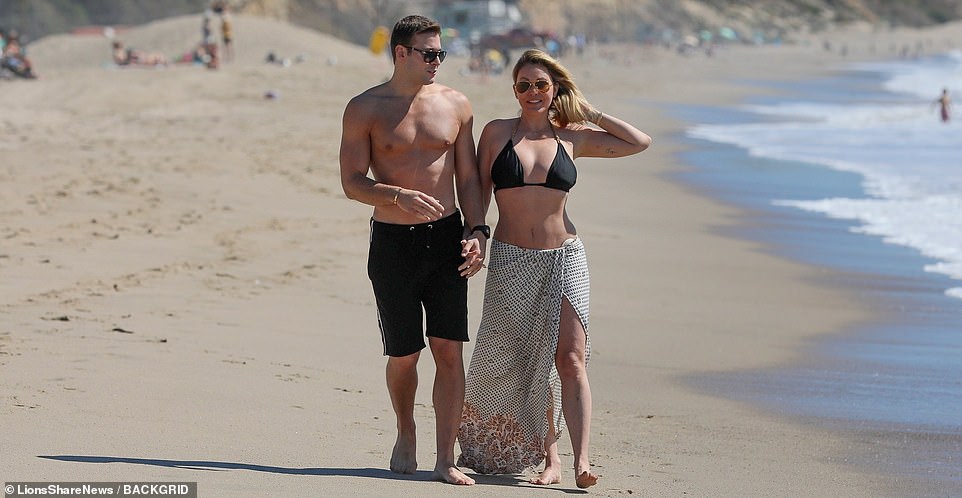 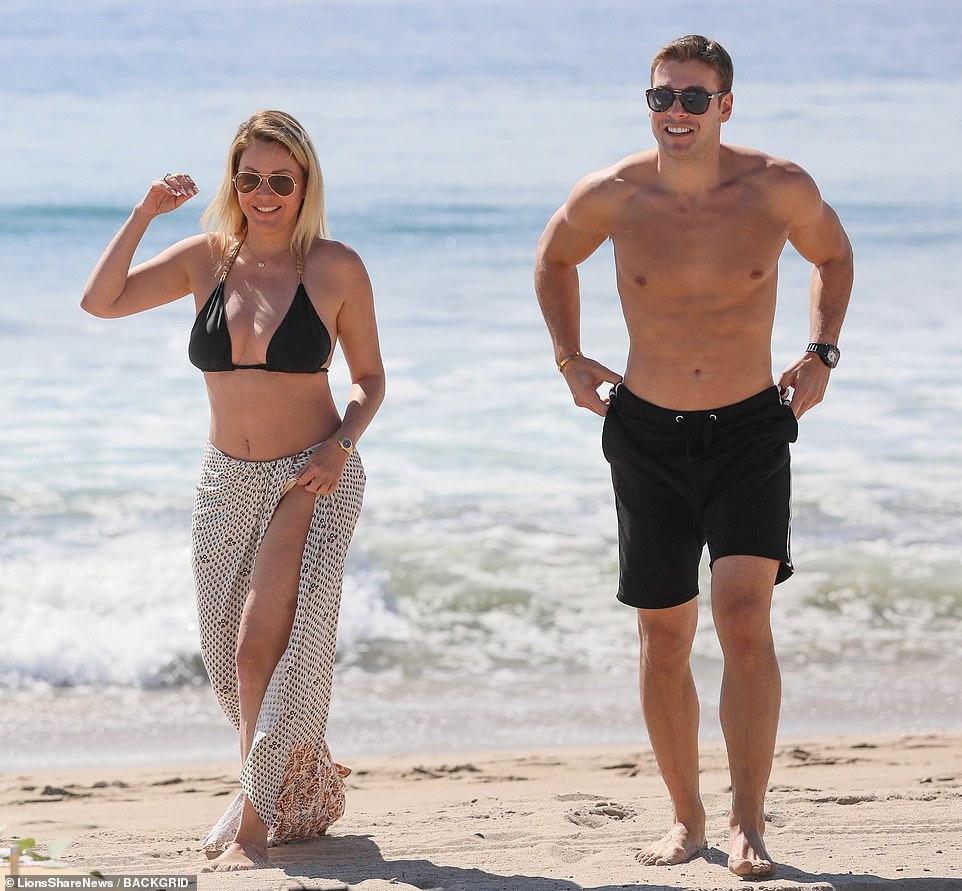 Happy: She told Us Weekly ‘I have a boyfriend that I’m super happy with and I’m happy he found a girlfriend and a friend. He deserves to be happy as well’ 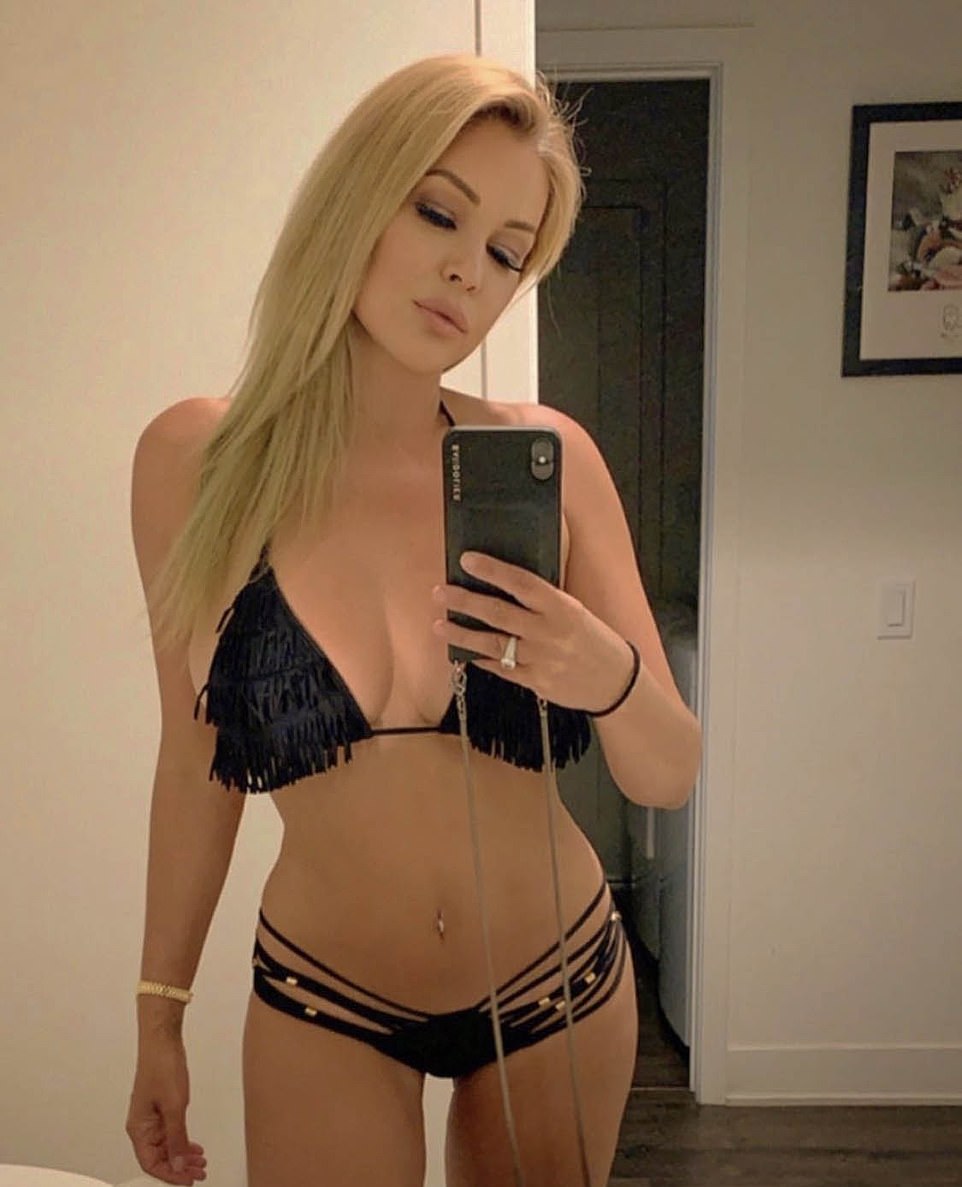 Thirst trap: She continued to put on a steamy social media display as she posed in a bikini

One fan commented on a photo of her ‘Shhhhiiiii that broad don’t got nothin’ on you. Travis downgraded big time,’ which Shanna ‘liked.’

Moakler also posted a story that seemed to be in reference to Kourtney, sharing a quote that read, ‘Stop complaining about your life. There are people out there dating your ex.’

She tried to set the record straight about the behavior to Us Weekly, claiming that she liked the disparaging comment by ‘accident’ and that the post about the ex was ‘not about Travis and Kourtney at all,’ but a ‘different ex,’ instead.

‘It was just a complete accident that I ‘liked’ it. A lot of times when I’m on my social media, I ‘like’ all the fans’ comments…I definitely wasn’t trying to start a social media war!,’ she said.

She continued, ‘I have a boyfriend that I’m super happy with and I’m happy he found a girlfriend and a friend. He deserves to be happy as well. I want nothing but the best for him and my kids — that’s the most important thing for me.’ 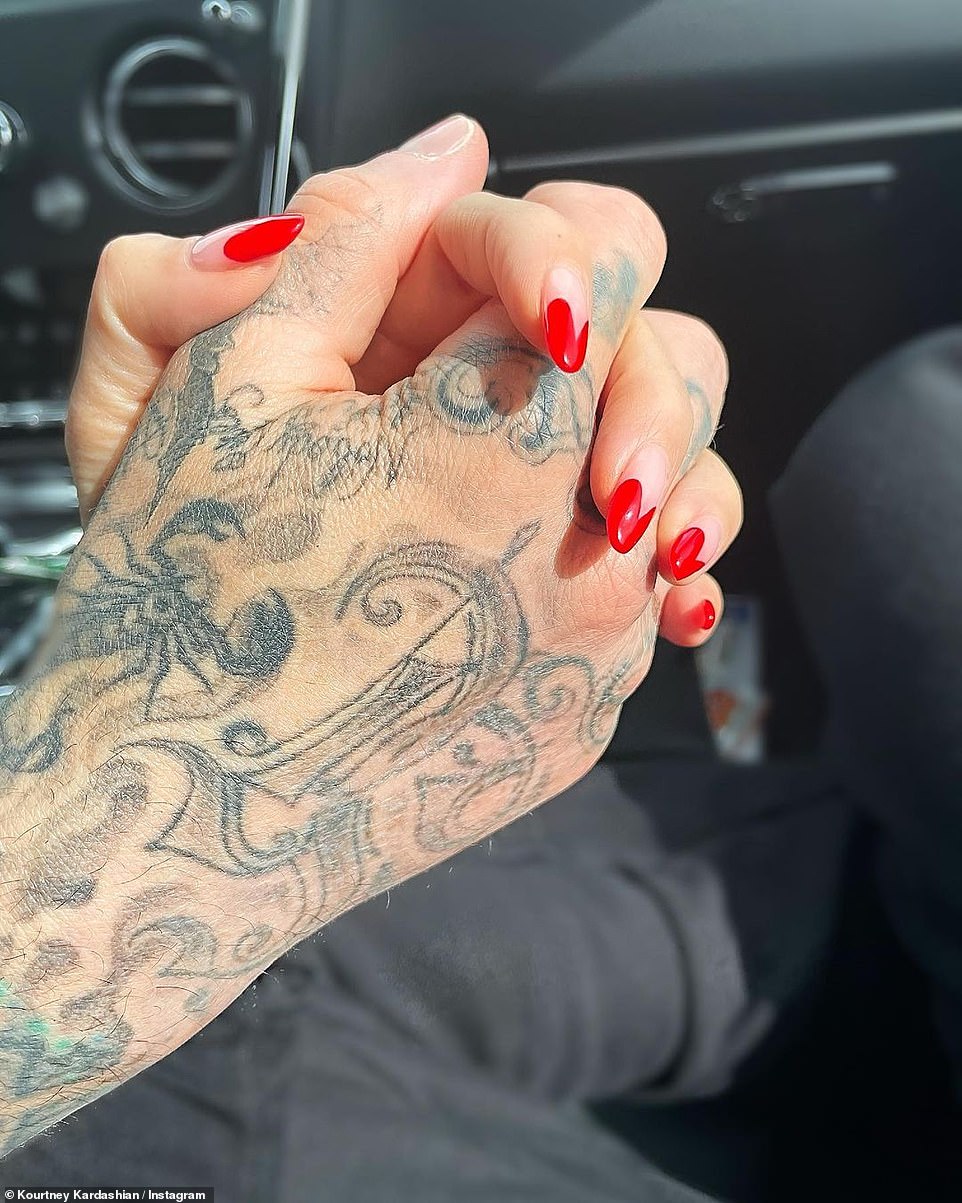 Missing you: He shared that Kourtney was both a ‘great mom’ and a ‘great friend’; February 16 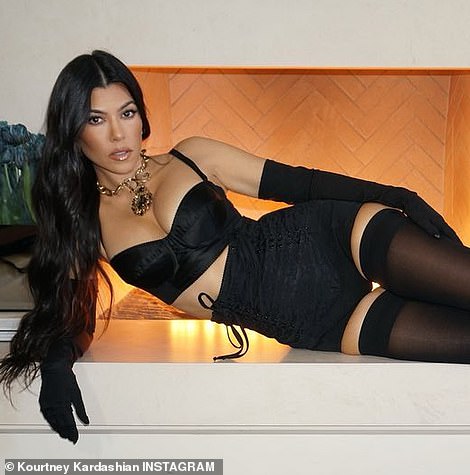 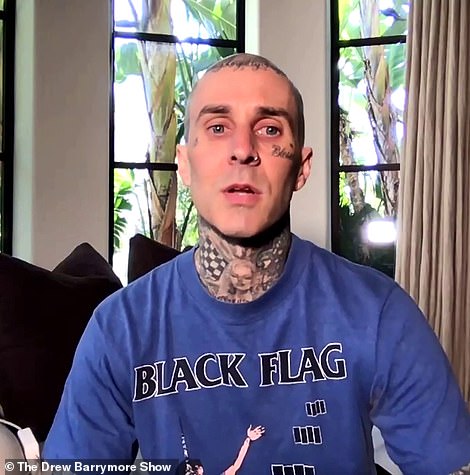 New woman: The longtime friends became lovers in recent months as she made their relationship Instagram official after Valentines Day 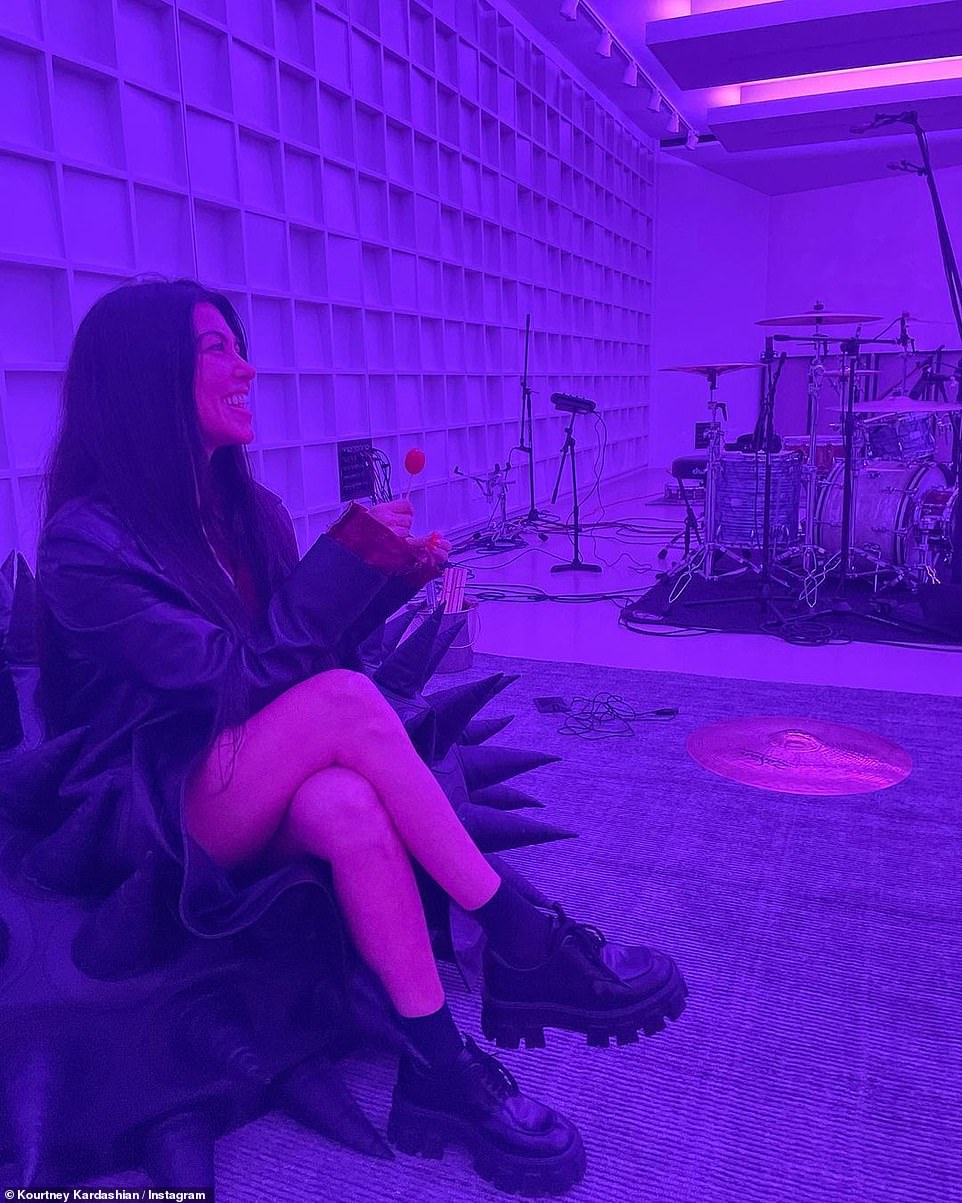 With the band: She looked every inch the rockstar girlfriend as she beamed while watching him in the studio; pictured February 27

Yesterday Barker talked publicly for the first time about the relationship with the eldest Kardashian sister to Drew Barrymore on her show.

The pair have been spending a lot of time together and conveniently both reside in Calabasas, though Barker said he likes to ‘miss someone’ a little at the beginning of a relationship.

‘I also really like missing someone and cherishing the time that I spend with them instead of every day being with them, especially in the beginning of the relationship.’ 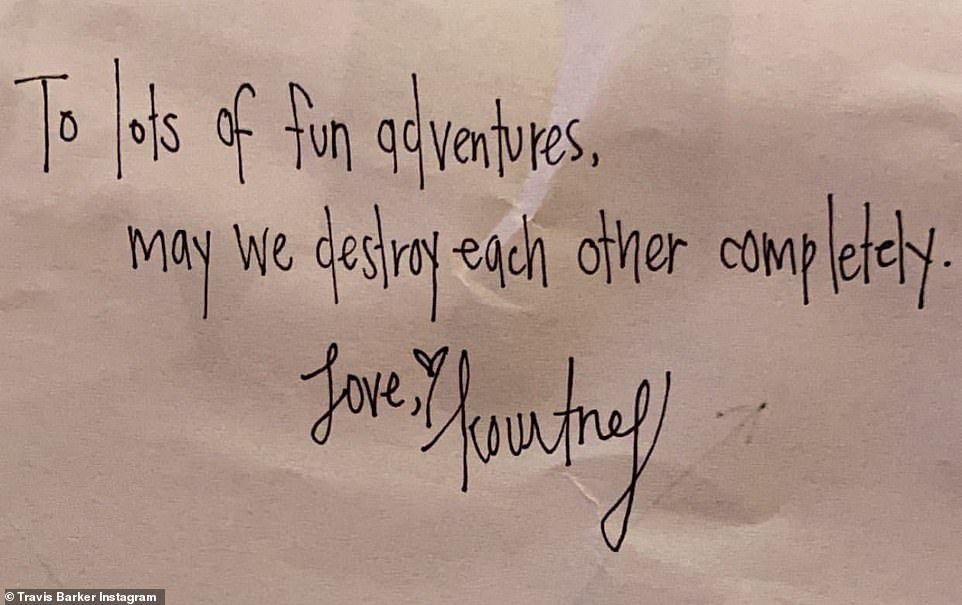 Love letters: She wrote him a love letter that said ‘may we destroy each other completely’ which he shared on social media