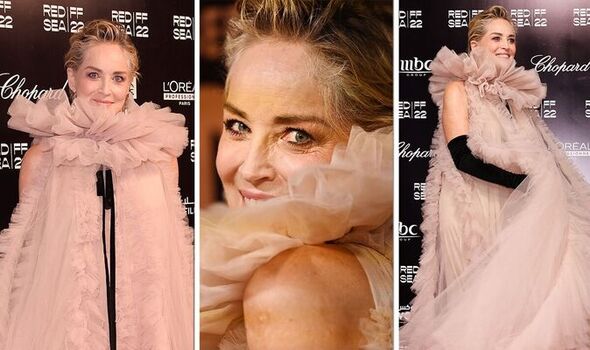 Sharon Stone, 64, appeared in a light, ruffled dress which almost covered her entirely.

Sharon Stone, 64, appeared in a light, ruffled dress which almost covered her entirely.

She was photographed alongside a slew of other celebrities at the third annual Red Sea Film Festival, which celebrates the Arabic film scene.

Also in attendance at the opening night gala was Guy Ritchie and Lucy Hale.

This year’s opening film for the festival is What’s Love Got To Do With It? which is set to be released early next year.

The actress also shared a snap with her 3.5 million Instagram followers, thanking the stylists and artists who got her ready for the screening.

The actress appeared in a light pink ruffled dress that cascaded from the high collar all the way down to the floor.

The pink gown swallowed the actress

Sharon, who is five foot nine inches, could barely pop her head out of the top of the gown as she smiled at onlookers.

Her long black gloves matched her dark shoes, which peeked through the dress as she twirled.

Sharon centred her soft makeup look around her eyes, giving off a golden glow through her hair and peachy pink blush.

The actress hid behind her ruffles

The high collar gave Sharon a demure look as she glanced over her shoulder at the photographers.

Sharon Stone gave her Instagram followers a sneak-peak too

She posed on a marble staircase with the caption: “Love from the Red Sea Film Festival.”