It’s Sir Cliff at The Cliff! Veteran popstar, 82, is all in white as he performs hits Summer Holiday and Congratulations to guests at top Barbados restaurant

After a stellar music career straddling an astonishing eight decades, he certainly knows a thing or two about rock.

And as a true citizen of Barbados, who better to formally open The Cliff – one of the island’s top restaurants – than Sir Cliff Richard.

The veteran singer, 82, treated guests to a performance of his hits Summer Holiday and Congratulations. 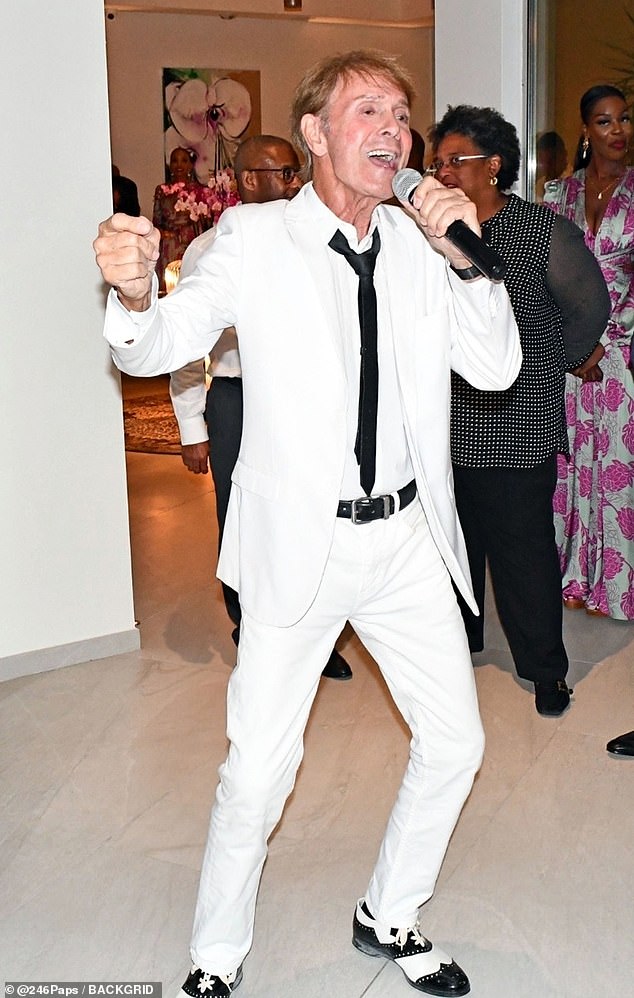 The veteran singer, 82, treated guests to a performance of his hits Summer Holiday and Congratulations

He sported a smart white suit and joked that he had continued the ‘Cliff at The Cliff’ theme by dressing as the White Cliffs of Dover. And he completed the look with a contrasting black tie, black belt and black and white brogues.

Sir Cliff arrived at the event with his close friend and former priest John McElynn, who he pushed in a wheelchair. He greeted guests as he toured the recently-renovated restaurant which overlooks Barbados’s Platinum Coast.

He joked to the crowd at the official opening: ‘Thank you so much. I didn’t realise you knew I was coming. It seems to us that most of us who arrive here, we come here to enjoy Barbados and then we fall in love with the place. I came here 22 years ago and I’m still here, I reside here, I pay tax here and I sing here sometimes.’ He went on: ‘You may have realised that I’m wearing a white suit.

‘Tonight, I am Cliff at The Cliff…I like to dress as though I am the White Cliffs of Dover.’

Last year the British pop star slashed the price of his luxury six-bedroom Barbados villa by £200,000 to £6.6million after failing to sell it since 2017.

He also reportedly put the 26-acre property, which boasts views of the Caribbean, a bar and a swimming pool, on Airbnb for £3,000 a night in February 2021.

Sir Cliff is set to feature in an hour-long BBC Christmas special this year, Cliff at Christmas, performing festive tunes, new songs, classic hits and being interviewed about his career.