Fans didn’t expect a Twitter feud to erupt between Soulja Boy and Randy Orton overnight, but the guys definitely had a lot to say to each other during the back and forth.

Soulja Boy faced the wrath of Randy Orton on Twitter during the early hours of March 2. It all started with Soulja’s tweet from Feb. 28, which read, “Rap game faker than WWE.” The following day, wrestler, Adam Pacitti, responded to Soulja Boy’s tweet. “Shut up you little b****,” he wrote. “I’m a WWE wrestler and I challenge you to a wrestling match for the gold.”

From there, Soulja Boy stood by his stance, responding, “I got gold chains, I need a gold belt to add to my collection. See what I mean, fake a*** WWE beef just like the rap game.” This was when Randy decided to weigh in on the conversation. “Fake? Dare this p***k to step up,” he wrote. “He don’t like movies? Consider us actors who do stunts, without pads, 200 days a year and don’t b***h when we get surgically repaired and come right back. Consider us 100 times tougher than anyone you’ve come across. Ain’t nuthin but a b**** a**.”

Soulja Boy was not intimidated, though. He directly re-posted Randy’s tweet, and wrote back, “Do you know who the f*** I am? I’ll bring the real wrestling. Don’t play with me.” The feud continued from there. Randy wrote, “‘Crank That’ came out in 07. You had a hell of a year. Serious $. Hats off to ya my dude. Here’s the thing tho…I like rap. I bump that s*** all day whether it’s Tunechi, Meek, JAY-Z, but you call what I do to survive, fake? F*** that. Come to my world and say that. Dare ya.” 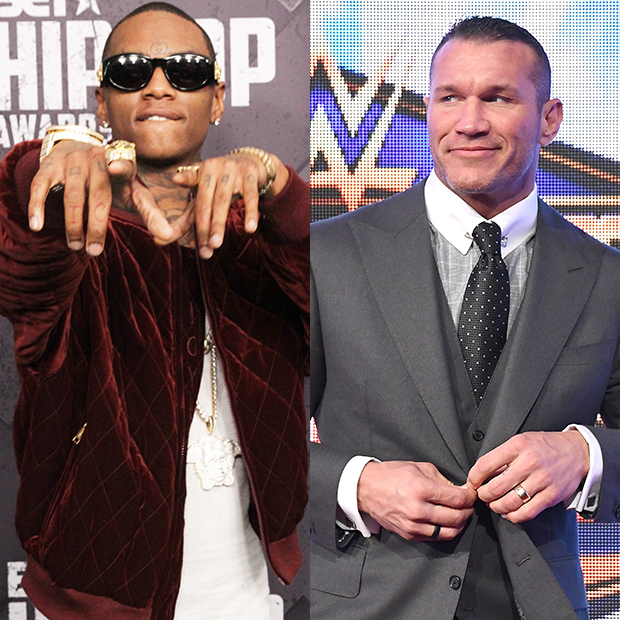 Well, Soulja Boy wasn’t afraid of the challenge. “If you mad because I spit facts, just say that,” he wrote. “What you do is FAKE and I stand on that. What I do is REAL. Come to your world? Lol welcome to Soulja World.” To that one, Randy clapped back, “U spittin facts? Seems like all you spittin is the same mess you rap about. Nut. Clear your throat my dawg, and be there. Enough talk. Back it up.”

While many WWE fans stepped in to defend Randy, Soulja Boy had Bow Wow on his side. “Yo Soulja Boy these wrestlers are terrified,” Bow Wow tweeted. “I have been giving them the business since I announced I was training. They so scared we gone take all their shine. The thing is we call our own shots and work for ourselves. They gotta check in with they boss in order to make things happen.” Bow Wow then tagged another wrestler, Triple H, in his tweet and added, “WE READY TO FIGHT.” This could provide for one interesting upcoming WWE storyline!