SPOILER ALERT: And Just like That… creator explains surprise death in premiere episode of Sex And The City reboot and WHY Peloton was used in storyline

The creator of the Sex And The City reboot series And Just Like That… is explaining the shocking death of one of the show’s long-running characters, and why a real Peloton stationary bike was used in the death scene.

Carrie’s long-time love, and husband, John James Preston, otherwise known as Mr. Big (Chris Noth), collapsed from a heart attack after working up a sweat on one of the company’s exercise bikes at the end of episode one.

Arriving back home from a piano recital for Charlotte’s daughter, Carrie is horrified to find Mr. Big laying on the bathroom floor, and proceeds to comfort him in his final moments before slipping away and dying. 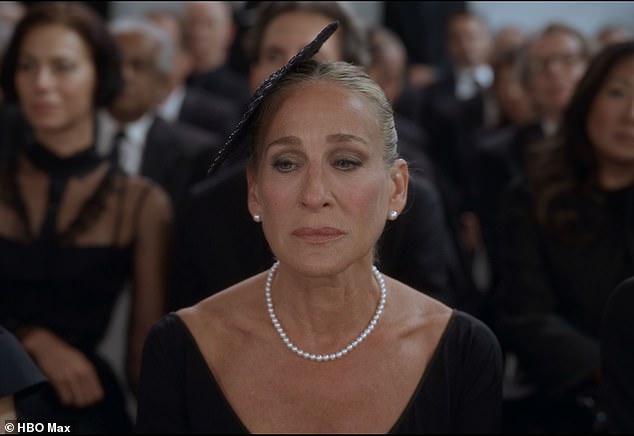 Shocking: The creator of the Sex And The City reboot series And Just Like That… is explaining the shocking death of one of the show’s long-running characters 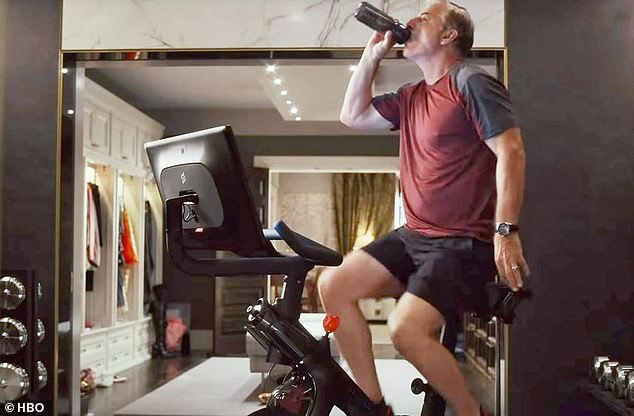 Mystery answered: Series developer Michael Patrick King also revealed why a real Peloton stationary bike was used in the the buildup to the surprise drama at the end of episode one

It turns out the shocking scenario was all part of the creative team’s decision to set the revival series apart from the original.

With many fans still in the state of shock, series developer Michael Patrick King revealed that the idea around killing Mr. Big off so early on was to give the show a new look and feel, which includes doing the unexpected through the perspective of Carrie Bradshaw (Sarah Jessica Parker).

‘Dying was the origin story,’ King confessed Vanity Fair, adding, ‘Nobody wanted to come back if [the show] was not going to be different.’

With so much time invested in his character, considering he made his debut in 1998, it’s not surprising that Noth wanted to sit down with King to have him explain how Mr. Big’s death pushes the storyline forward.

‘When I told Chris that Mr. Big dies in the first episode, he definitely knew it wasn’t [going to be the] same. And we had to talk about it,’ King confessed.

‘He really wanted to talk about why he’s dying and what it does for this series. The more we talked about it, the more he understood that it was for Carrie— and Carrie’s storyline is it’s better to have loved and lost than never have loved at all.’

Working up a sweat: Towards the end of episode one, Mr. Big (Chris Noth) gets in a workout on a Peloton spin bike, while wife Carrie Bradshaw is out at a piano recital for Charlotte’s daughter 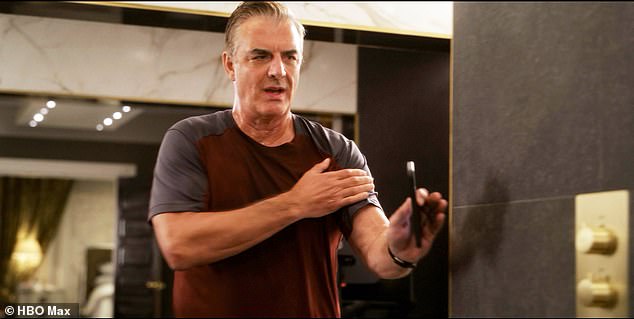 After getting off the stationary bike, Mr. Big, otherwise known as John James Preston, grimaces in pain when he begins to have a heart attack

Eventually, Noth came to understand that his death would open so doors to Carrie’s story, all while helping build the mystic that has always surrounded Mr. Big since he made his way into her life in the late 1990s.

‘The legacy of that character wouldn’t diminish, but would increase his legend by leaving,’ he explained.

‘If you can find someone who loves you, that’s fabulous. But this really lets us test out that thesis— the voiceover we end the series with in Sex in the City— that the most significant, challenging, difficult, and rewarding relationship of all is the one you have with yourself.’

Plus, the idea of Carrie Bradshaw having to head back out into the dating world, brings the show full circle, only now fans can see how she responds to the current dating world through the lens of a mature woman in her 50s. 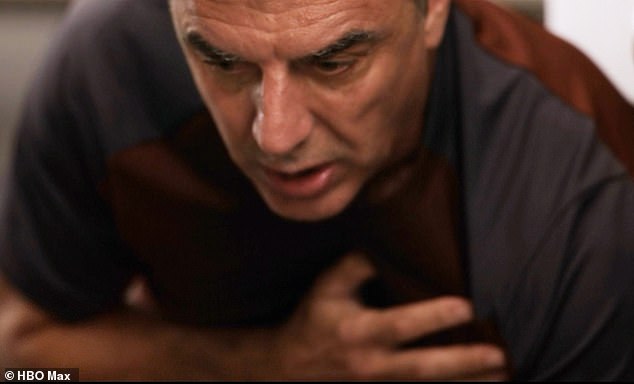 Heartbreaking: By the end of the episode, Mr. Big collapses in the bathroom area and dies 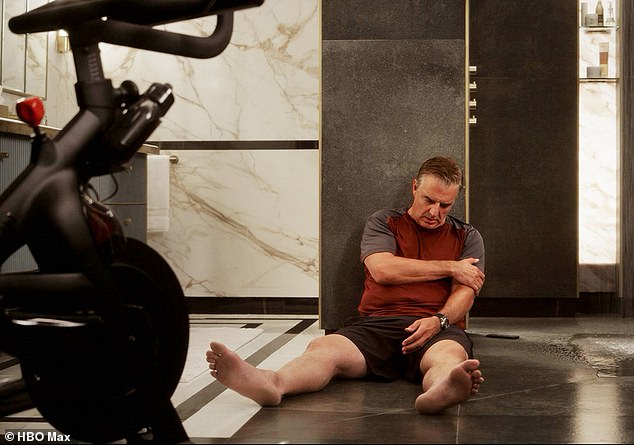 Tragic ending: Upon learning his character dies in the first episode, Noth wanted to sit down with King to have him explain how Mr. Big’s demise would push the storyline forward

Many fans have been also asking why the show used an actual exercise equipment company like Peloton, which is based in New York City, as opposed to a generic spin bike brand.

King was quick point out that the death of Mr. Big was not caused by Peloton, and by using a known company humanizes the character and the overall realism of the show.

‘Well, we knew he was gonna have a heart attack. So the Peloton had nothing to do with the heart attack,’ he said emphatically, before continuing, ‘The Peloton is a thing [though] that people have now, right? It reflects [modern] society. I wanted something to show that Mr. Big was current. Everybody kept coming and saying, “Oh, [the characters] are old. They’re old.” These characters are alive and vibrant.’

Considering the revival series was using the COVID-9 pandemic as part of the backdrop of life for the characters, King thought about what Mr. Big would be doing with his time while in quarantine.

‘He’d be listening to his record collection and exercising at home,’ King explained, ‘So we built this enormously decadent, titan-of-the-world spa bathroom and put the signature item that you would have in that at home, which is a Peloton. I ride it all the time, not in a bathroom like that.’ 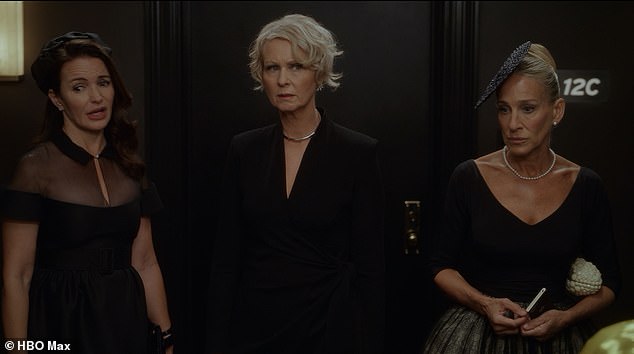 The reasoning: King revealed that the idea around killing Mr. Big off so early on in the series was to give the show a new look and feel, especially through the perspective of Carrie Bradshaw (Sarah Jessica Parker) 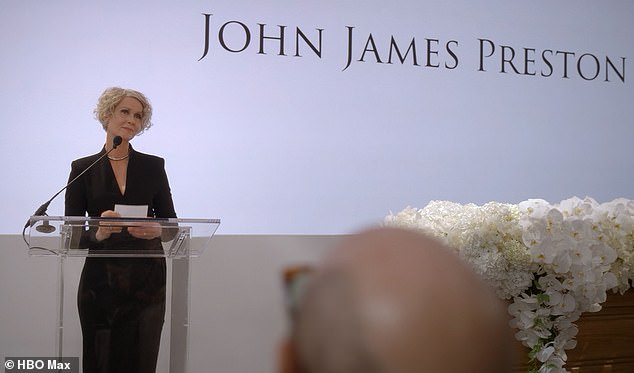 Goodbye: King explained that the death of Mr. Big was not caused by the Peloton bike, and by using a known company humanizes the character and the overall realism of the show 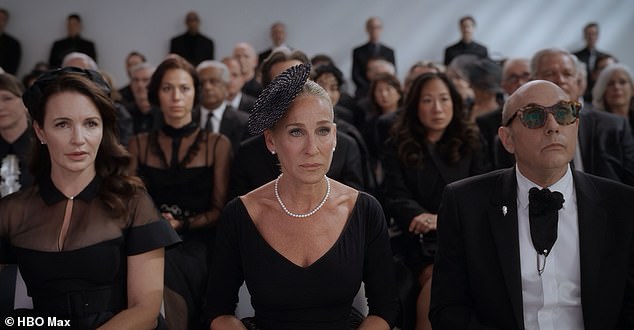 Sendoff: Charlotte, Carrie, Stanford and the rest of the main characters mourned the loss of Mr. Big together at his memorial

King then made the comparison to Carrie’s fashion choices at specific times in her life.

‘When Carrie carried a Fendi bag, that was the bag of the moment. Peloton is the bike of the moment. The heart attack happened off the bike,’ he explained.

A rep for Peloton has since come out to reveal that the company approved instructor Jess King’s appearance on the show, but didn’t know anything about the plot, including Big’s demise by way of a heart attack.

‘HBO procured the Peloton Bike on their own,’ Peloton spokesperson Denise Kelly told BuzzFeed, adding, ‘Peloton was aware that a bike would be used in the episode and that Jess King would be portraying a fictional Peloton instructor.’

To help keep the storyline under wraps, Kelly maintains HBO decided ‘not disclose the larger context surrounding the scene to Peloton in advance.’

All the drama surrounding the death and funeral happened in the two-episode drop on December 16.

The third episode, out of the 10 created for the season, is slated to be available for streaming on Thursday, December 16. 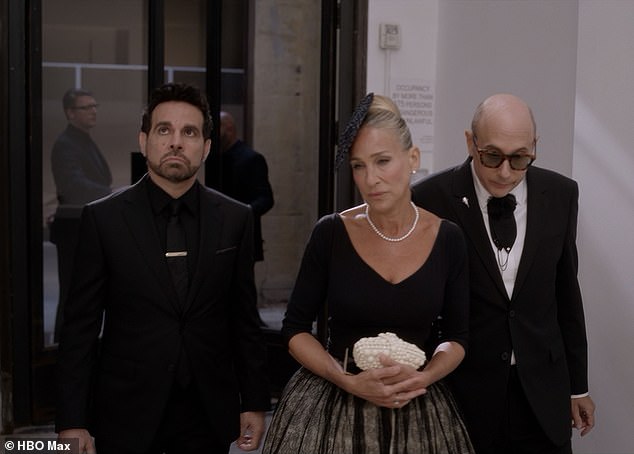 Single again! The death of Mr. Big, and thus forcing Carrie back into the dating world, brings the show full circle, only now fans can see how she responds to the current dating world through the lens of a mature woman in her 50s 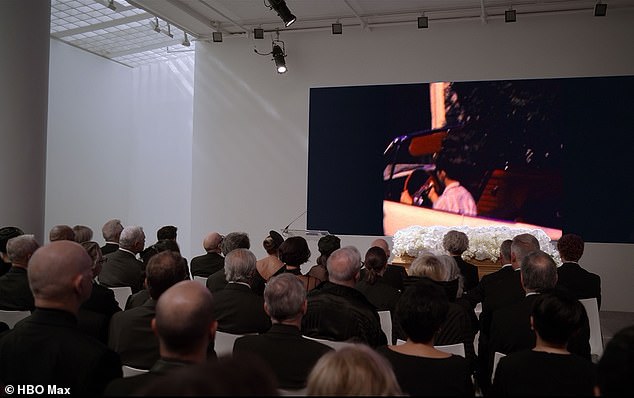 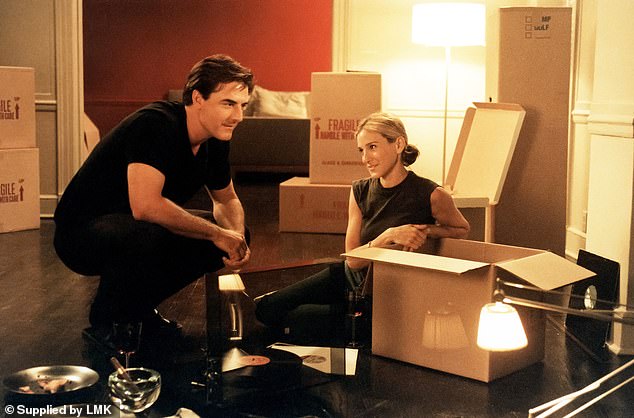 Charming: Mr. Big and Carrie had an on-again, off-again relationship, beginning back in 1998 on the original Sex And The City, which ran for six seasons; 94 episodes in all