Tyga was spending time with Ana Beatriz Boaretto last week. And while in St Barts this week he was with another Kylie Jenner look-alike: model and actress Nadia Almualem, who has appeared in his 2018 music video for the song Swap Meet.

On Thursday the star proved she can dress like the 22-year-old Lip Kit mogul as well as she was seen in standard Jenner wear: a pink crop top with matching sweatpants.

The siren was spotted with the rapper as they left the island with pals Amber Rose and her partner AE Edwards after a posh vacation on the island. 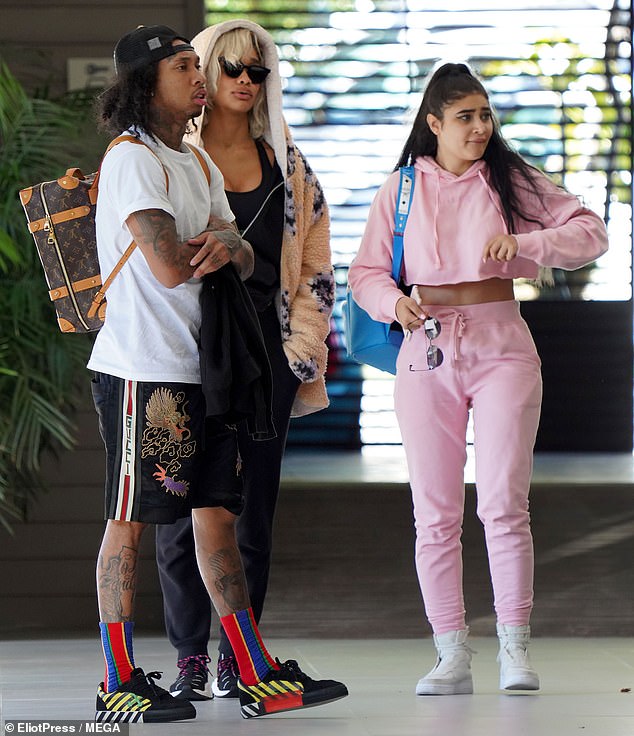 Glasses off: Here Instagram star Nadia is seen with Tyga as well as a female friend

She likes light pink! Kylie in a pink sweat outfit while taking a selfie, left. And right, the pinup is seen in a light pink suit as she hit the Grammy Awards in February

Ana had on a light pink cropped hoodie with drawstrings that went perfectly with her high-waisted sweatpants.

And she had on the same white high-top sneakers Kylie often steps out in.

The star did not stop there.

She wore her long, raven hair in a partial topknot, like Jenner has done many times before, and at one point added oversized mirrored aviator sunglasses. 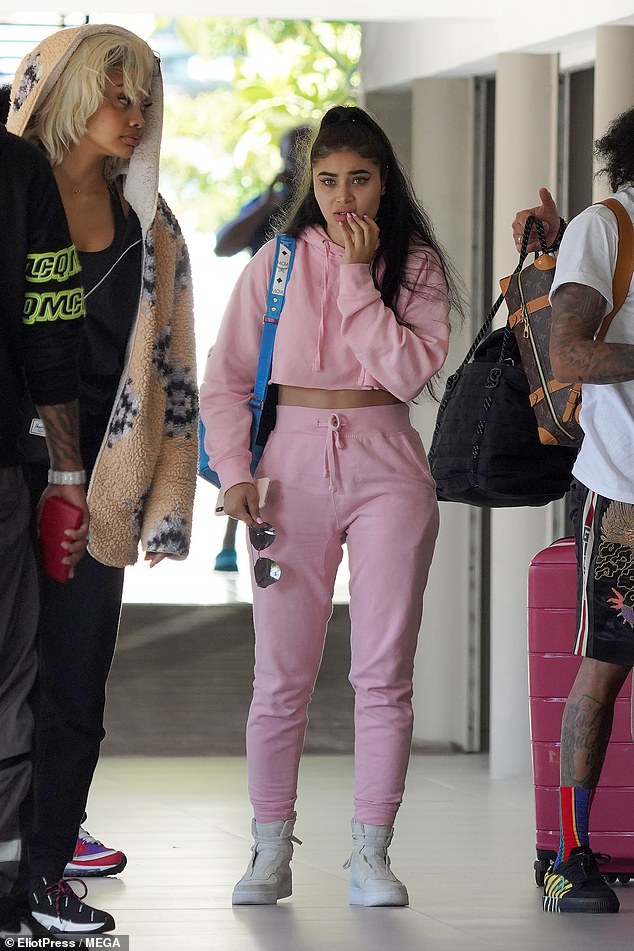 Ana Jenner? Almualem had on a light pink cropped hoodie with drawstrings that went perfectly with her high-waisted sweatpants. And she had on the same white high-top sneakers Kylie often steps out in 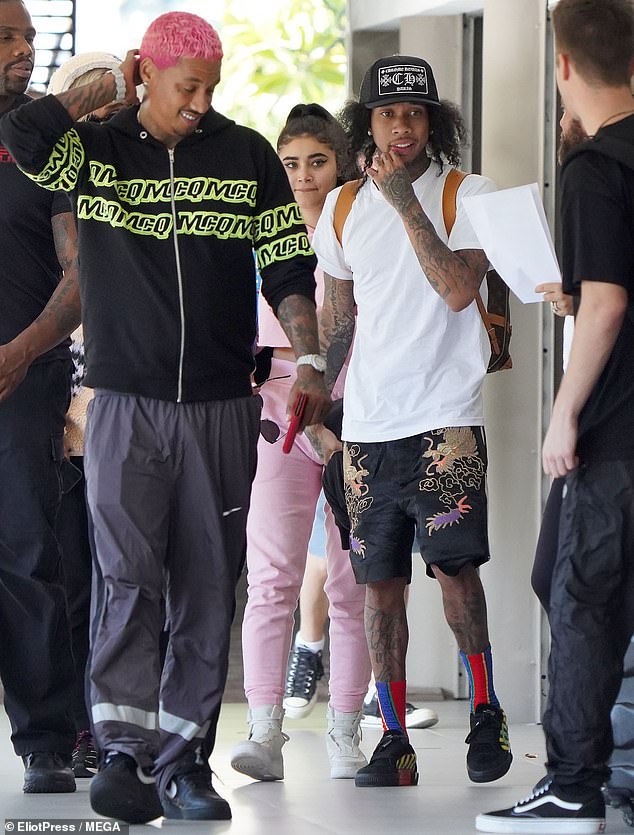 Casual boy: Tyga looked very casual in a white T-shirt with a Louis Vuitton backpack. He added black shorts with a Chinese embroidered print. Nadia is in the background

Nadia took to social media this week to share images in her pink outfit so fans would make no mistake that she was the one with Tyga.

The budding pinup is seen outside a small plane.

And she is also pictured inside a private jet with her legs up. The star, who has almost 100K followers on Instagram, captioned the shots, ‘Blessed & never stressed.’ She added a blue cap emoji which Tyga often uses.

The Texas native told VoyageHouston last year: ‘I’m a model/actress… since I’m more than one ethnic group (half Hispanic/half Arab), I try to be as versatile as possible with my shoots as well as with my work.

‘I can go from fitness to Bollywood from high fashion to lifestyle in a matter of seconds! What sets me apart is further than the obvious (which is my physical appearance) but my spirit, my personality.’ 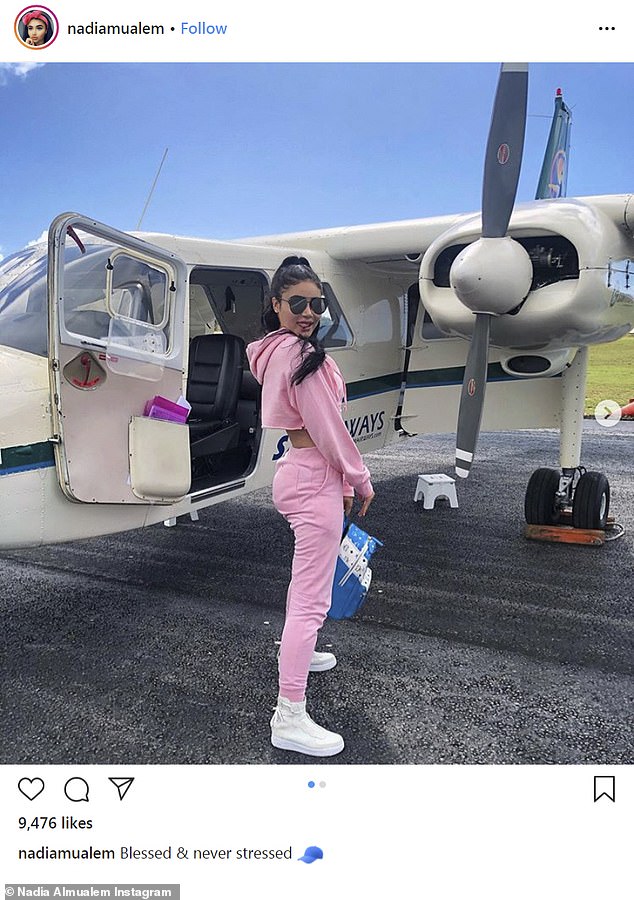 The photo evidence it’s her! Nadia shared this image in her pink outfit to Instagram 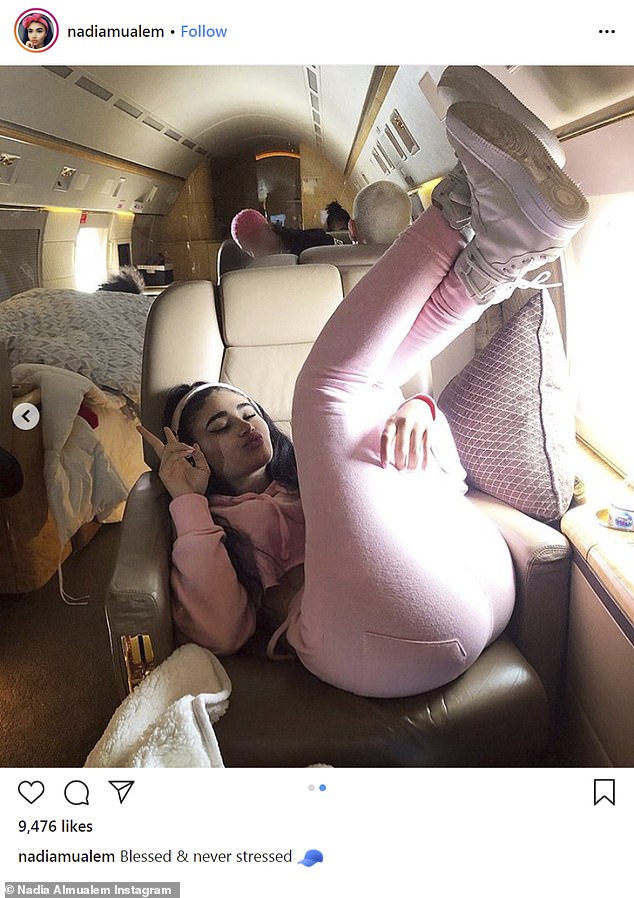 Feet up: The star, who has almost 100K followers on Instagram, captioned this shot, ‘Blessed & never stressed.’ She added a blue cap emoji which Tyga often uses

Tyga looked very casual in a white T-shirt with a Louis Vuitton backpack. He added black shorts with a Chinese embroidered print.

His socks were blue and red and he added black sneakers.

The singer let his curls flop underneath a black cap. 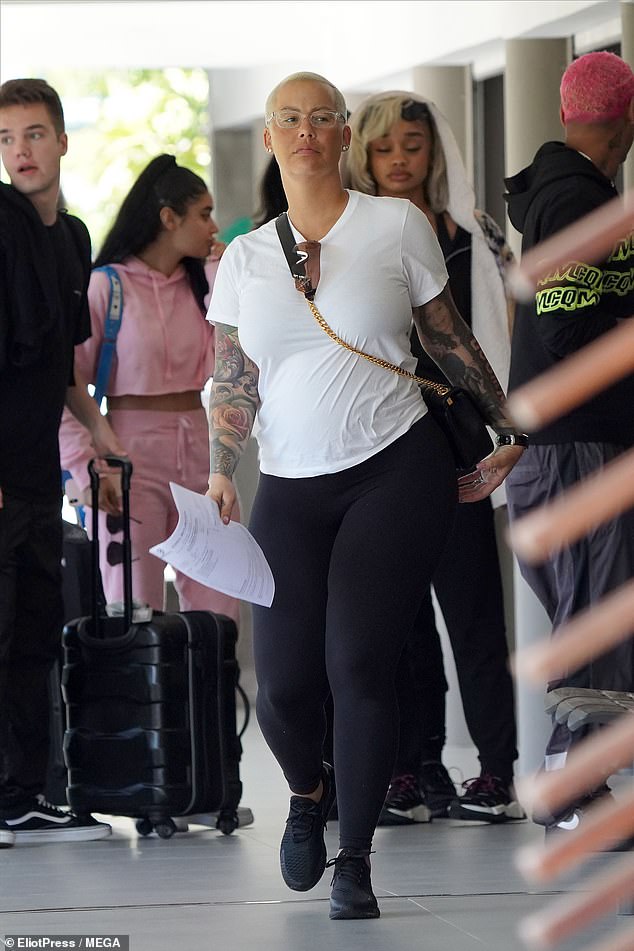 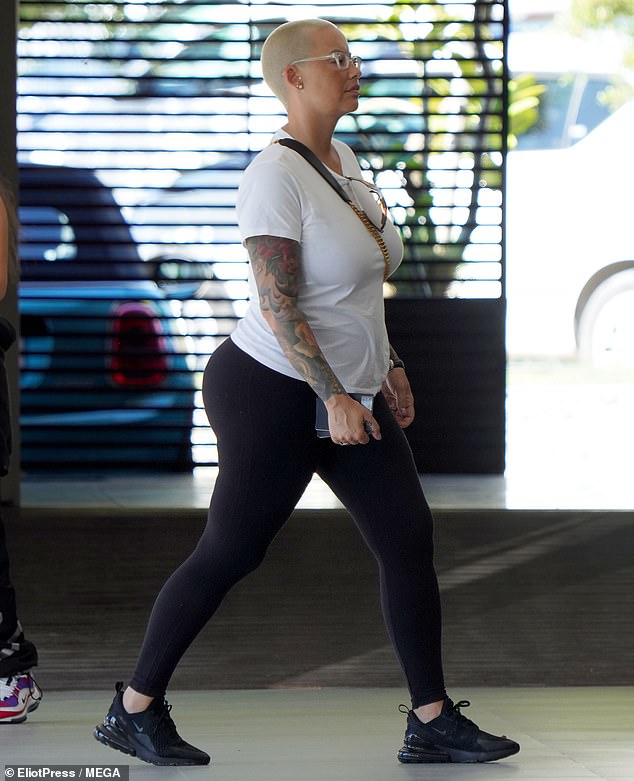 Day off from glam: Amber wore a white T-shirt that showed off her several arm tattoos, adding black leggings and black sneakers

Rose, who is good friends with Tyga’s ex Blac Chyna (together Tyga and Chyna have son King Cairo), looked slender after welcoming her second child, son Slash Electric, with AE.

She also has son Sebastian with singer Wiz Khalifa.

A purse was worn crossbody style. 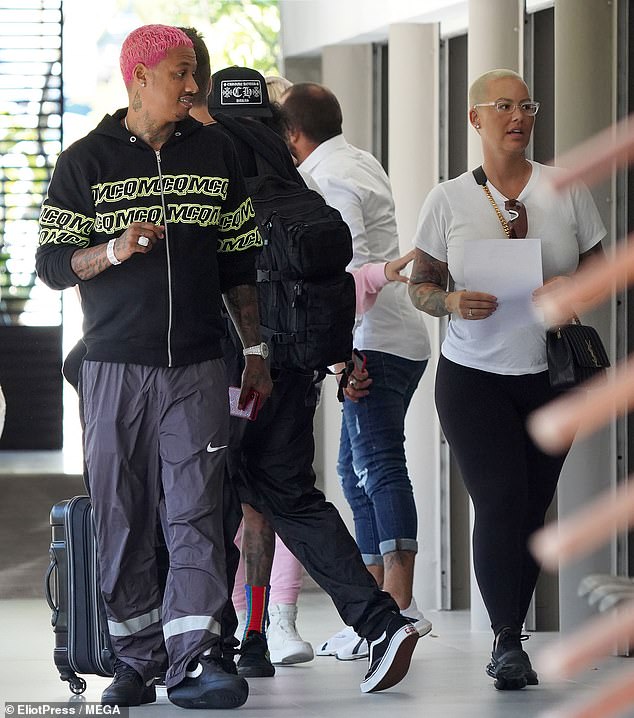 Her love: Her beau AE had on a zip-up jacket with Nike pants and matching trainers. His hair was bright pink and he was dripping in diamond jewelry

Her beau AE had on a zip-up jacket with Nike pants and matching trainers. His hair was bright pink and he was dripping in diamond jewelry.

The day before the four had been seen on a yacht as they wore swimsuits. They were also see taking Jet Skis for a ride. 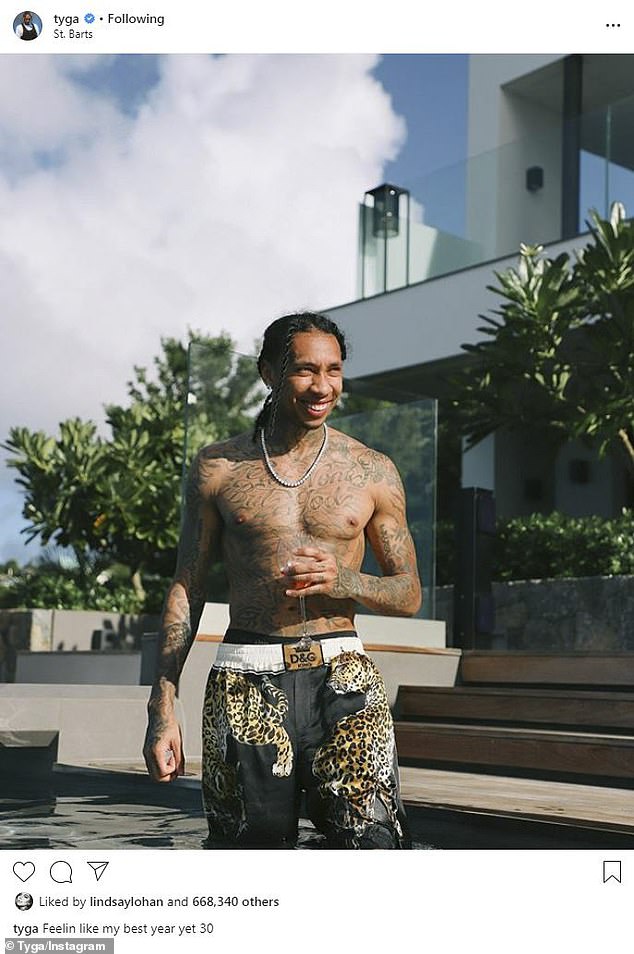 Happy at last: Tyga shared this image from his vacation as he wore D&G shorts

Almualem seems to be a new lady friend of the rapper.

On Saturday Tyga was with Ana as they left Delilah nightclub in West Hollywood. She rode shotgun in his red Ferrari.

The star has a full Instagram page with saucy photos of herself in a bikini.

She had 33K on Tuesday; that number went up to 45K by Thursday. 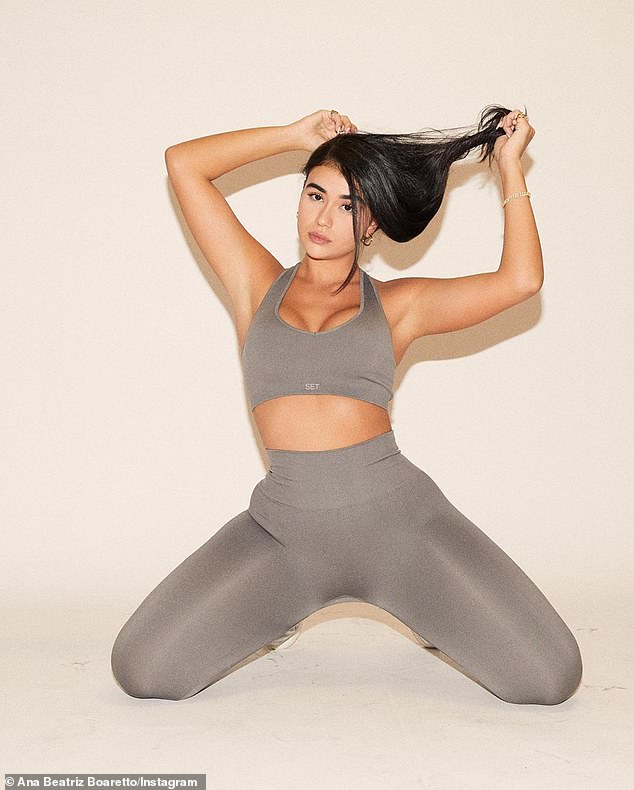 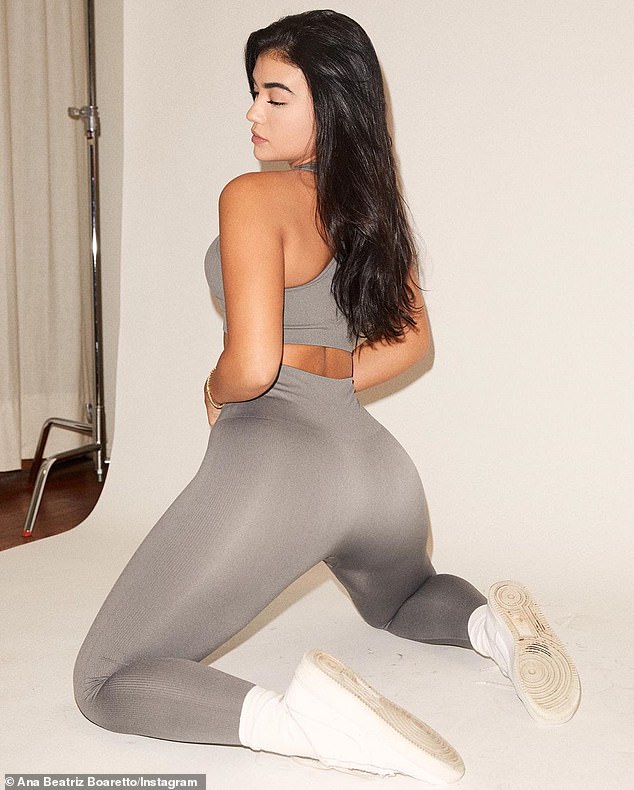 New fame: She had 33K Instagram followers on Tuesday; on Thursday it jumped to 45K

Tyga and Kylie dated from 2014, when they met at her birthday party, until 2017. The two became very close and he even was seen on her reality TV show Keeping Up With The Kardashians.

On Saturday Tyga (which stands for Thank You God Always) and Ana looked casual as they left the private party before hopping in the luxury car and heading off to their next destination.

This night out comes just one month after his ex girlfriend Jenner, 22, was spotted outside a recording studio he was at as she was dropping off her two friends Anastasia ‘Stassi’ Karanikolaou and Kelsey Calemine. 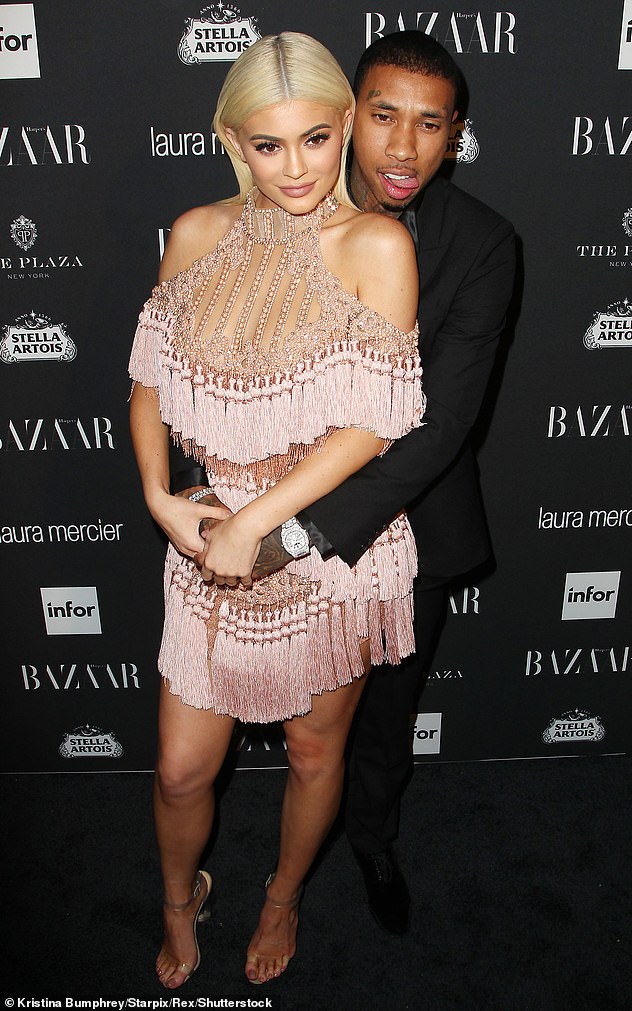 Back then: Kylie Jenner and Tyga smile together one the carpet for the Harper’s Bazaar ICONS party in New York back in 2016

The group of friends was out at a club before they headed to the studio, with a source claiming that Kylie left from a different exit to avoid cameras.

Kylie later took to her Twitter to deny that she met up with her famous ex and said she was dropping off her friends.

The two were first connected back in 2014 when Tyga was 24 and attending the makeup mogul’s 17th birthday party. Shortly after it news broke that Tyga and his girlfriend Blac Chyna had split up, they share their sing King Kairo together.

Just months later, Tyga and Kylie make their first outing together with dinner in Hollywood. Throughout their relationship the rapper wrote numerous songs about his relations with Jenner.

The two later split in 2017, and she went on to date another rapper, Travis Scott, in which they both now share their daughter Stormi together. 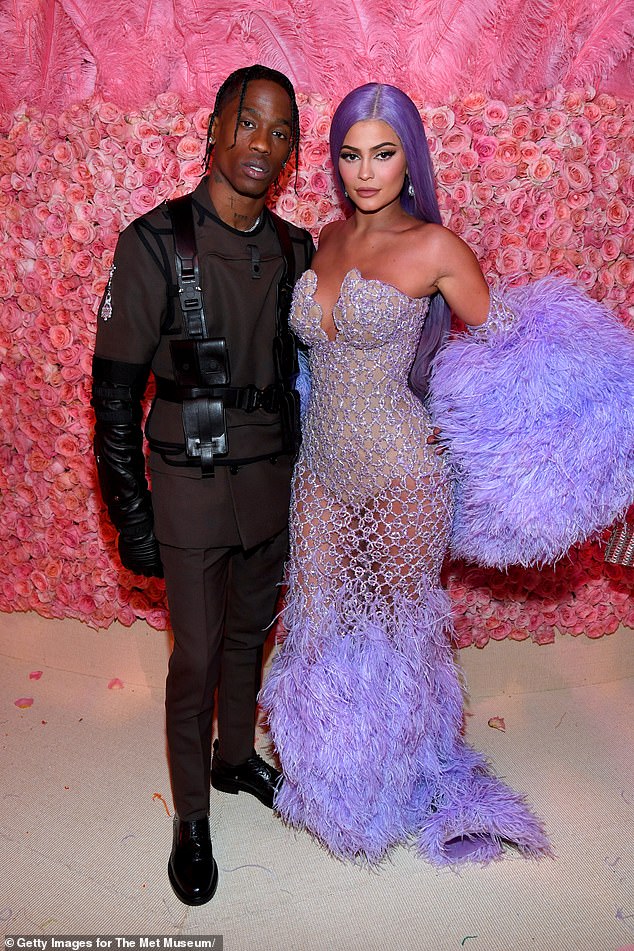 Her other ex: She split from Travis Scott this summer; they share daughter Stormi. Seen in May