Vogue Williams has revealed she refuses to watch Love Island but is not giving up her social media accounts despite being trolled so much that she broke down in tears.

The Irish model, 34, says she must be ‘one of the only people’ not to follow the UK reality show about amorous singles, but she does not want to be glued to the TV at 9pm every night so prefers to watch less addictive TV.

Vogue adds she is hooked on Instagram and has no plans to quit -despite being ribbed for everything from the size of her breasts to the cellulite on her legs. 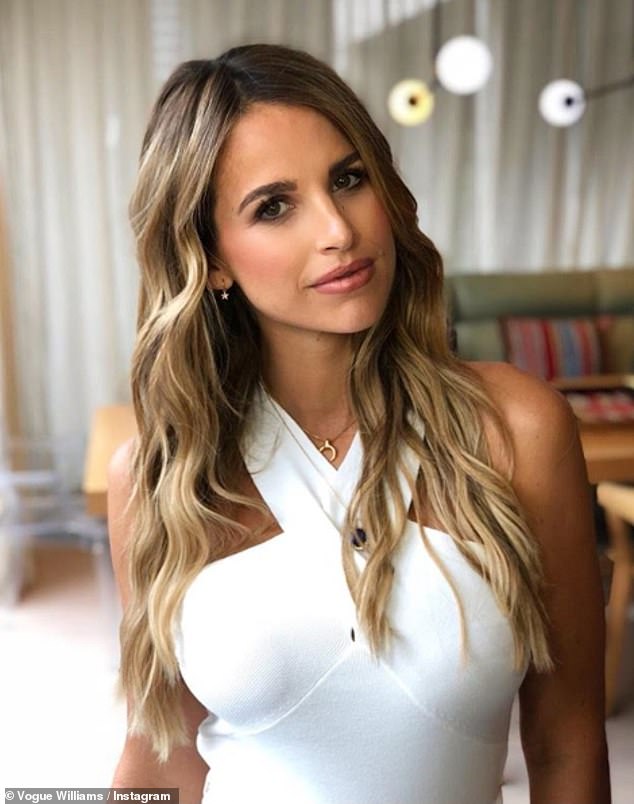 Strong: Vogue Williams, 34, said admitted she had never watched Love Island but is hooked on Instagram and has no plans to quit despite facing savage trolling

In an exclusive interview with the Irish Mail On Sunday, Vogue said: ‘I don’t watch Love Island. I’m one of the only people in Britain that hasn’t watched it.

‘I know it sounds crazy, but I thought if I started watching it I’d turn into one of the people that can’t go out at night because they have to be watching Love Island at 9pm.

‘I do love reality TV and watch most of the rest. I love Keeping Up With The Kardashians and Masterchef and I’m currently watching Gordon Ramsay’s Kitchen Nightmares even though it’s about a million years old.’ 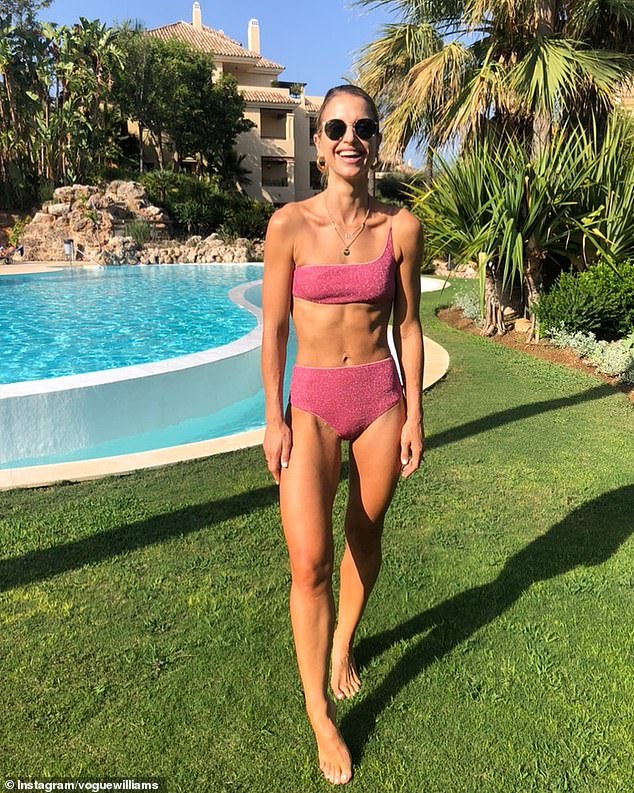 Cruel: Vogue was bombarded with abuse after pictures emerged of her on a beach holiday last December – with trolls calling her fat and saying she should get a boob job

The presenter married British reality star Spencer Matthews, 31, on his family estate in Scotland in June 2018 and the pair share eighteen-month-old son Theodore.

Vogue splits her time between London and the Dublin suburb of Howth, was bombarded with abuse after pictures emerged of her on a beach holiday last December – with trolls calling her fat and saying she should get a boob job.

She later wrote on Instagram: ‘Today I cried about my body. I usually let this go over my head but they were so nasty that I allowed it to really get to me.’ 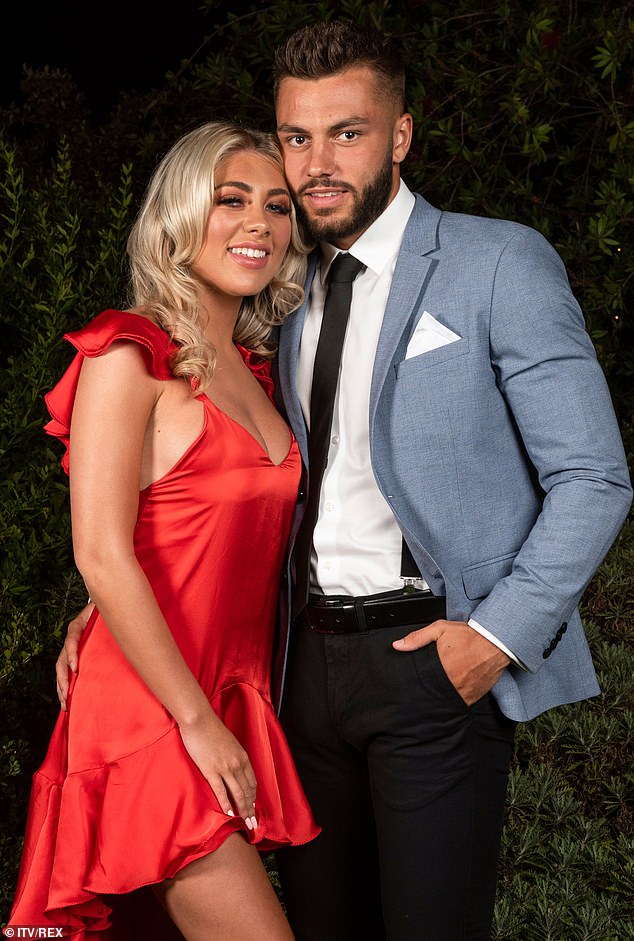 Addictive: Vogue said she didn’t tune in to the latest series of Love Island which saw Paige Turley, 22, and Finn  Tapp, 20, crowned winning couple as she didn’t want to become hooked

Celebrities including the rapper Stormzy have abruptly cancelled their accounts this year after growing tired of the toxic soup of social media.

But Vogue hit back: ‘I’m a full timer on Instagram and I love it.

‘I actually have such a nice group of mums and different people who follow me and I would say about 95 per cent of the comments are really nice. 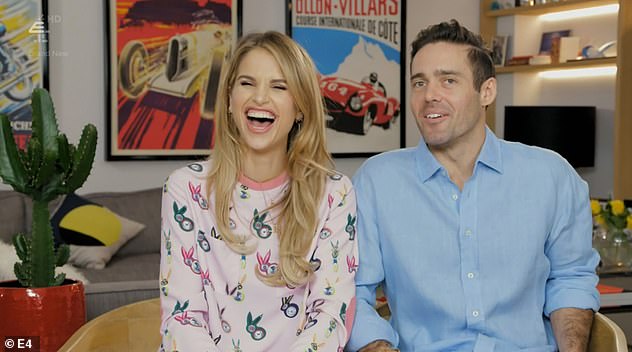 Small screen: Spencer, 31, and his wife Vogue Williams, 34, star in their own E4 reality series, Spencer, Vogue and Wedding Two which has  has documented them becoming parents

‘But if you look at someone like Kim Kardashian, the amount of abuse she gets and the comments, it’s just like outrageous that people think it’s OK to do something like that.

Vogue continued: ‘Spencer doesn’t really like social media at all. He only follows one person and that’s me.

‘If you look at his timeline it’s just a picture of me and that’s the way he likes it. He always says, “I don’t want to see anyone else’s sh*t.”‘ 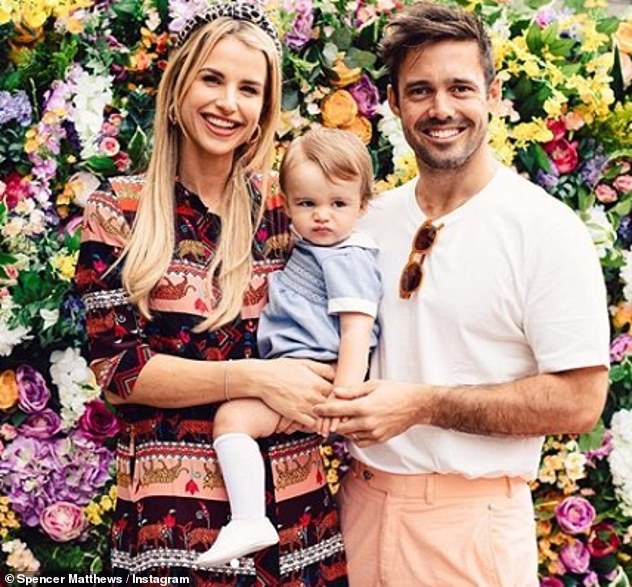 Last month the couple watched Ireland’s crunch Guinness Six Nations game against England together at Twickenham, which ended in despair for Vogue with a crushing 24-12 defeat.

She said: ‘I was chatting a big game about Ireland winning and then we were terrible – it was really embarrassing.

‘But Theodore now has an Irish rugby jersey which he loves and he doesn’t have an England one because Spencer hasn’t gone out and bought him one yet, so that makes me feel better. 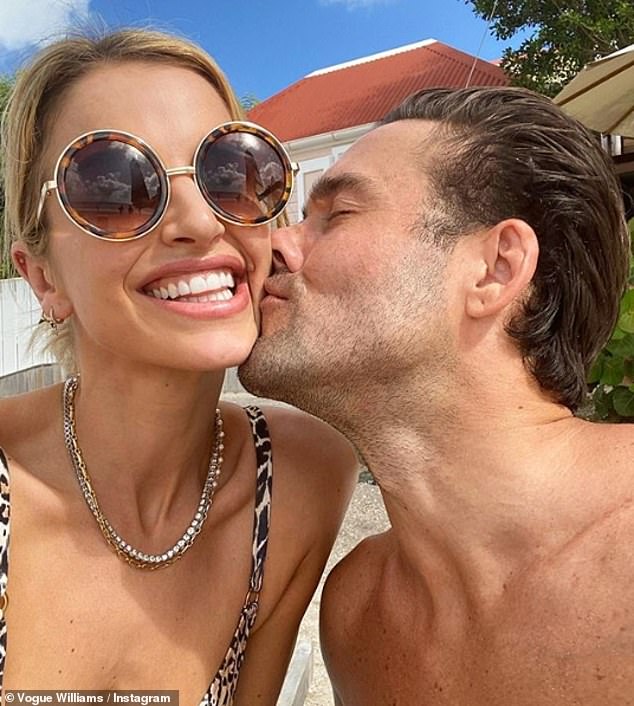 History: Spencer and Vogue first began dating after they met on the set of Channel 4 series The Jump in 2017 which Spencer went on to win