A BRIDE is raging after a guest brought her two toddlers to her child-free wedding – and they cried during the ceremony.

The woman revealed she and her now-husband had been planning their wedding for more than two years, and expressly stated it would be a child-free zone. 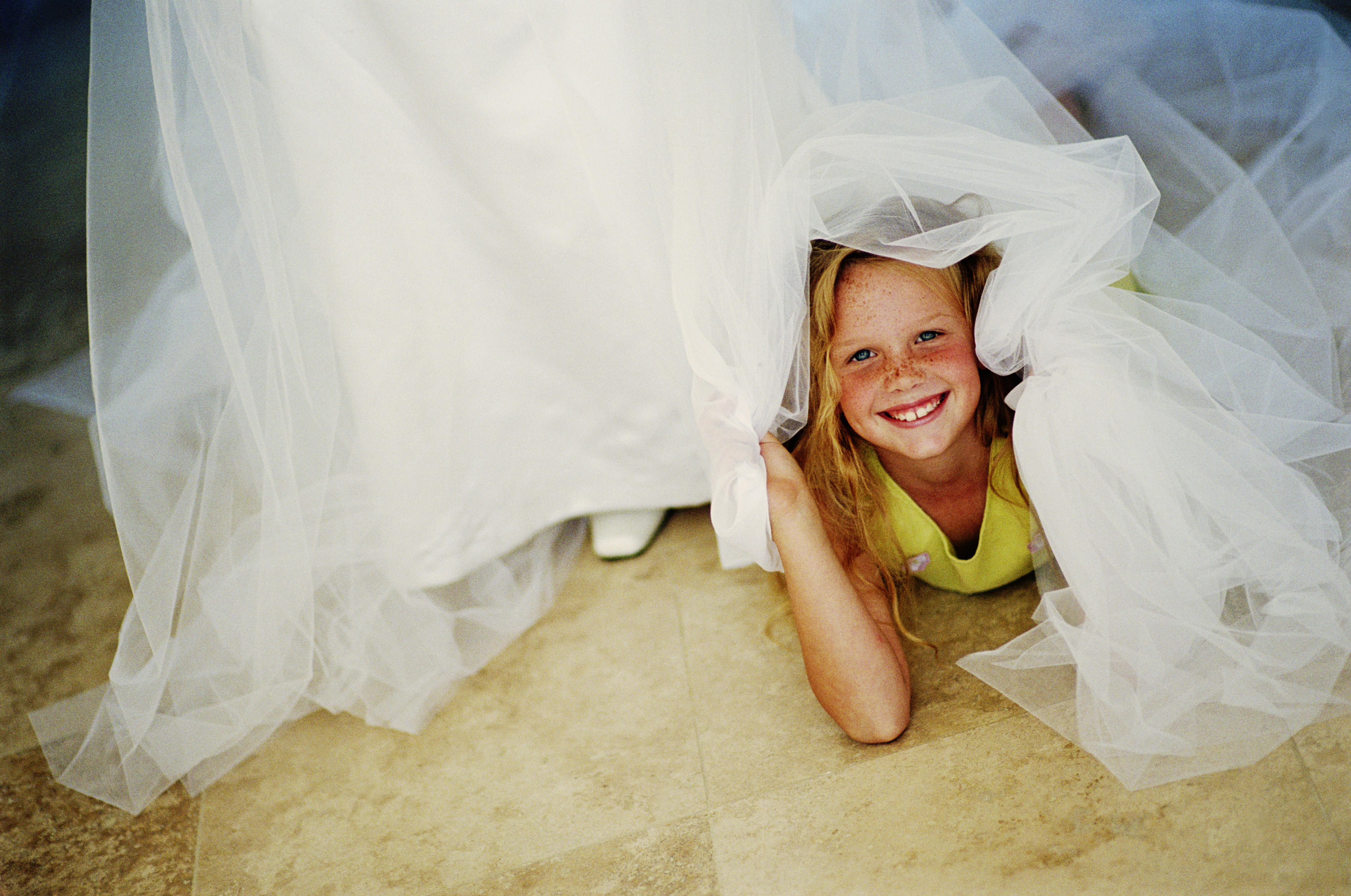 The couple even decided to have their reception at a casino, which doesn’t allow children.

Posting on Reddit, she explained she allowed two older children, her niece and nephew aged ten and six, because they were the ring bearers and flower girl.

She wrote: “We made it very clear we did not want kids at the wedding. In fact, the wedding reception was at a casino and kids couldn’t come.

“We made one exception though. My niece and nephew who were the flower girl and ring bearer were in the wedding and were invited. 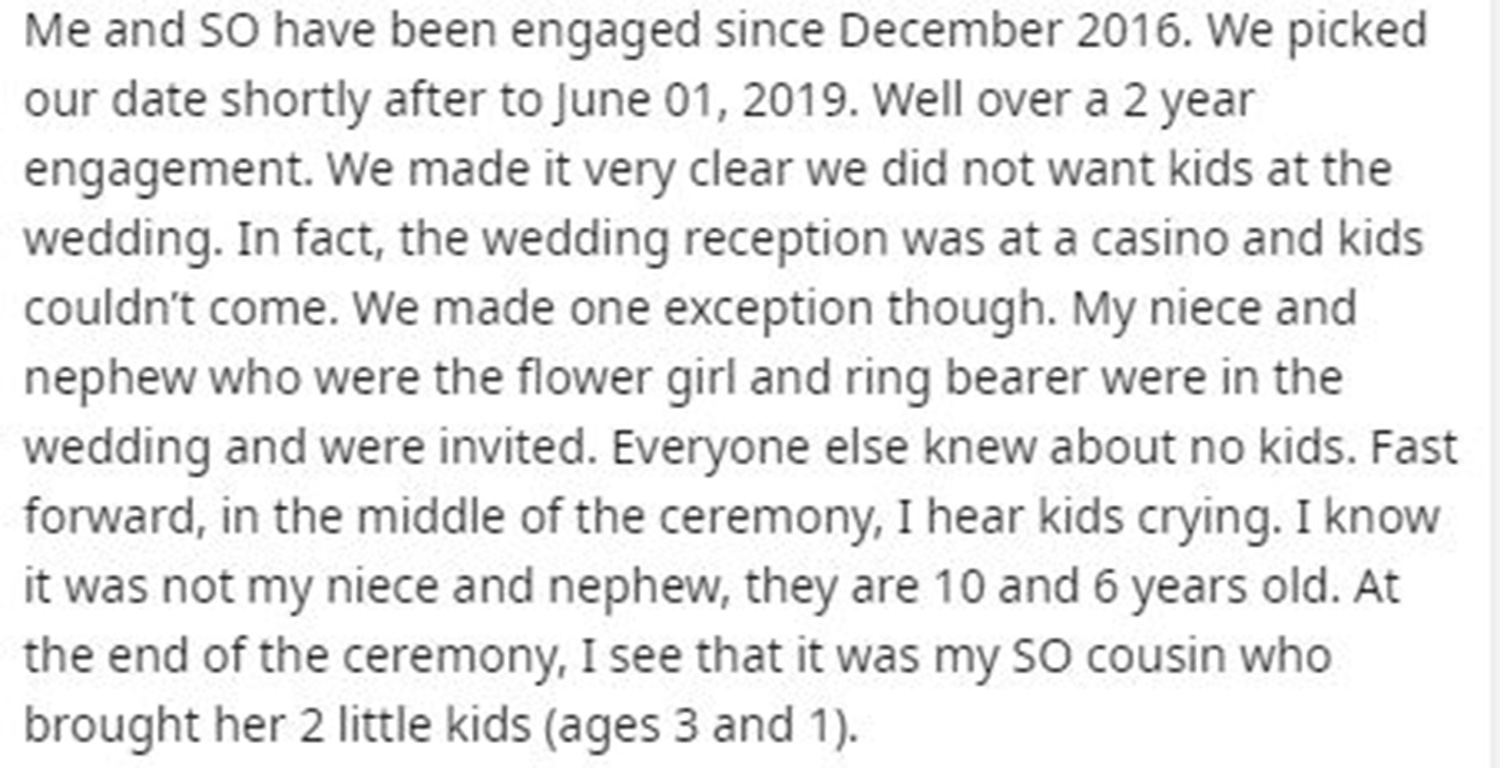 “Everyone else knew about no kids.”

But as she was stood at the altar with her fiancé, she heard crying.

To her horror she realised her now-husband’s cousin has brought her two children, aged three and one.

She fumed: “Fast forward, in the middle of the ceremony, I hear kids crying.

She said it was the “absolute worst”, and they screamed at the key moments in the ceremony.

The bride added: “I said no kids because I didn’t want kids crying during the ceremony. 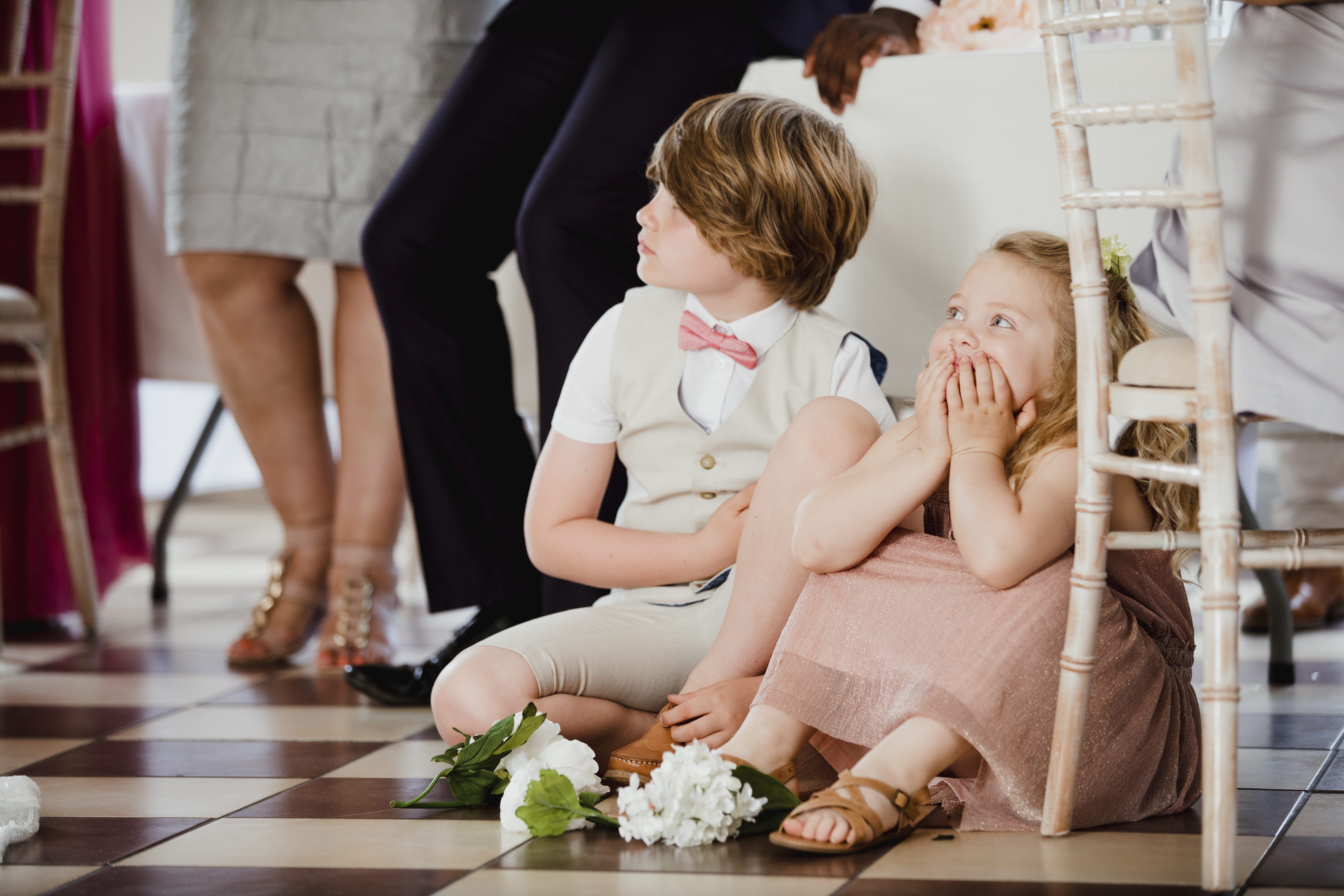 "What happened? The kids started crying and fussing in the middle of the priest’s sermon.

“As much as I was in the moment, it was silent as hell and then all everyone heard was crying.”

She explained that she had never had a good relationship with this cousin, who she said gave her terrible gifts on purpose and left her name off Christmas cards.

And she added that if she had seen her cousin before she got to the altar, she "would've stopped in the aisle and asked them to leave."

Hundreds of people have commented on her post, suggesting how she should deal with the cousin. 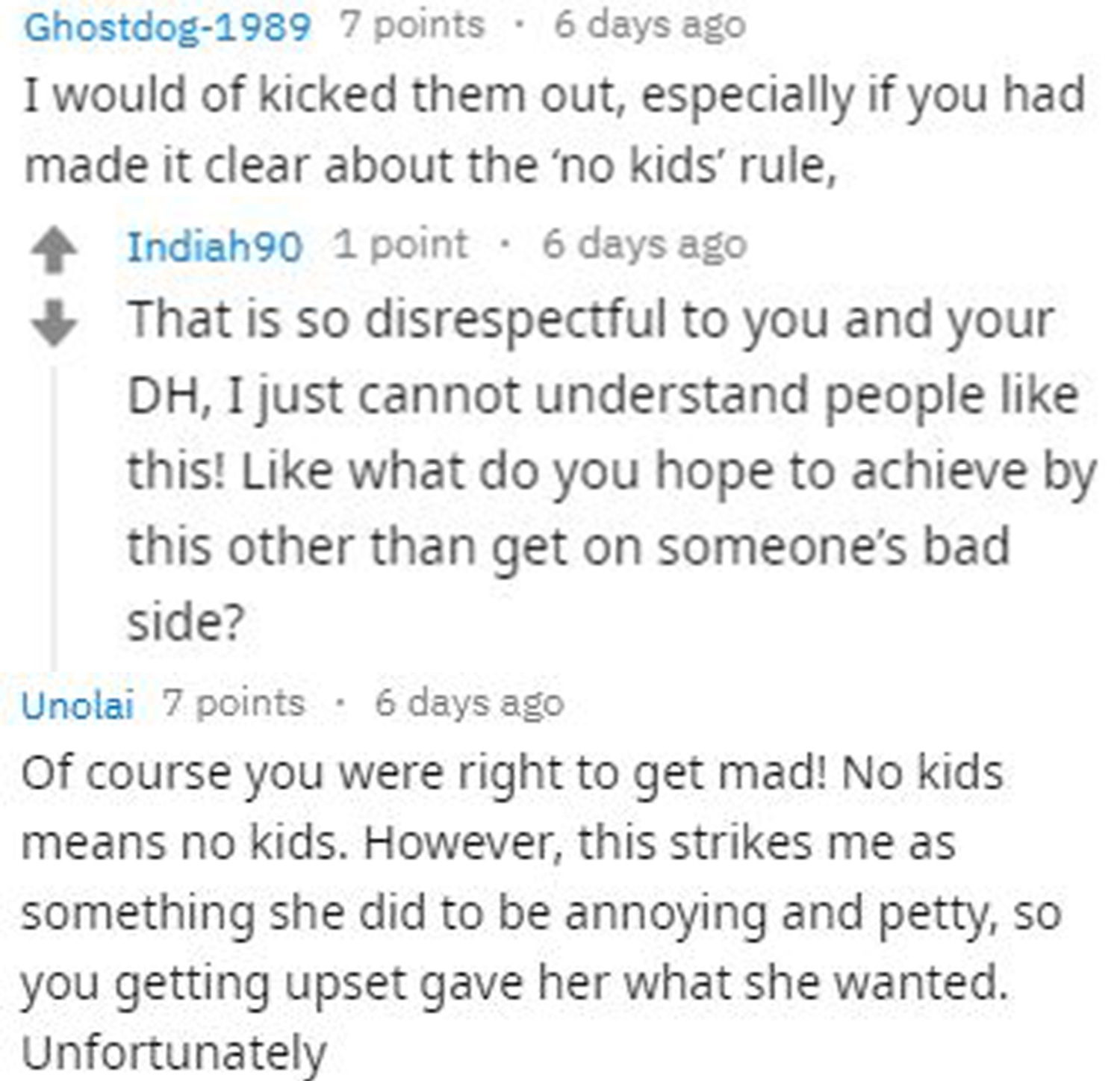 One person suggested she say: “Thank you so much for celebrating our special day with us.

“Please don’t listen to what other people are saying about you bringing the children.

“We’re just happy you could make it.”

Another person said: “She sounds awful. I’m surprised you even invited her.”

A third wrote: “That is so disrespectful to you and your DH [dear husband], I just cannot understand people like this!

“Like what do you hope to achieve by this other that get on someone’s bad side?”

Somebody else suggested: “I would of kicked them out, especially if you had made it clear about the ‘no kids’ rule.”

But not everyone thought she was in the right, pointing out she did still have two children there. 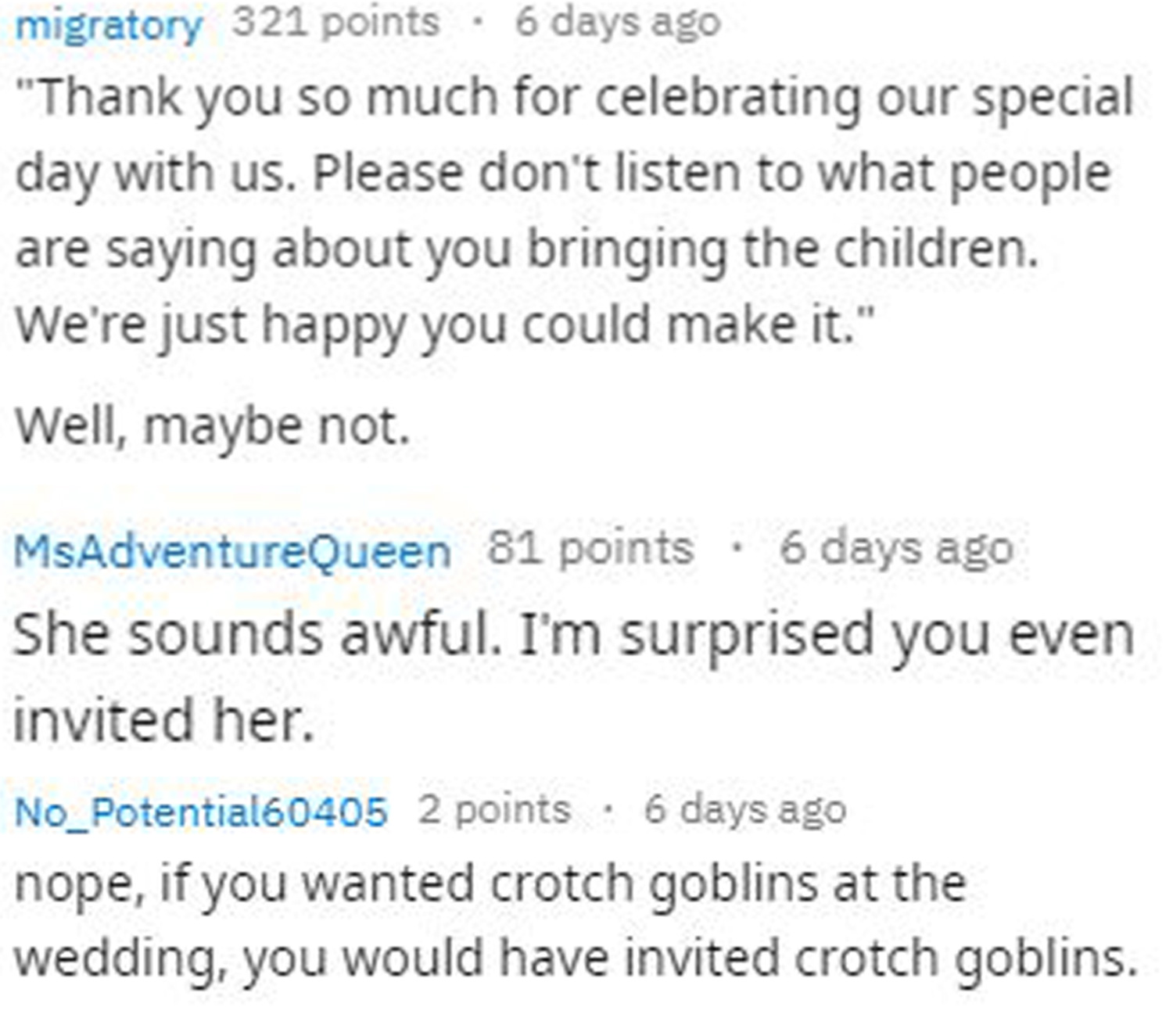 One person commented: "Then it's not a childless wedding.

"Either you're concerned about kids crying and ruining the adult theme go on or you aren't.

"Having some kids there is countering any argument you could make for a childless event.

And this person agreed, saying: "I think you are trying to make this into a big thing and should drop it instead of causing tensions with your new in-laws."

There has been a rise in child-free weddings as people weigh up the disruption kids will cause, as well as the cost.

With the average wedding in the UK costing £32,273, according to Hitched, some couples are choosing to prioritise their big day over accommodating everyone.

But adult-only weddings have led to arguments in families, as people face upsetting their relatives or compromising their big day.

And this bride was mocked for the ‘hideous’ home adjustments to $1 wedding dress.

While this bride outraged after her bridesmaid sister picks a black lace gown to wear.

In more wedding shaming news, this bride-to-be was mocked for combining her and her fiance’s birthstones in an engagement ring and people think it looks like ‘ketchup and mustard’.