Goodbye, Grand Palais: For her fall collection, Chanel creative director Virginie Viard traded the vast steel-and-glass structure for the more intimate backdrop of Castel, the Paris institution that has hosted its share of fashion week after-parties.

Models wound their way up and down the club’s labyrinthine staircase in the film shot by Inez van Lamsweerde and Vinoodh Matadin, which sought to recapture the magic of Paris nightlife, shut down since last October as part of measures designed to curb the spread of the coronavirus.

Remember coat checks? This one was on steroids, filling up with the tweed coats and puffer jackets that models casually tossed off to reveal a variety of skimpy and sparkly party outfits.

Maxi coats were layered over sheer négligé slips that split open to reveal high-waisted knickers, while a chunky black bouclé cardigan slipped off to expose a holographic-effect sequined dress. 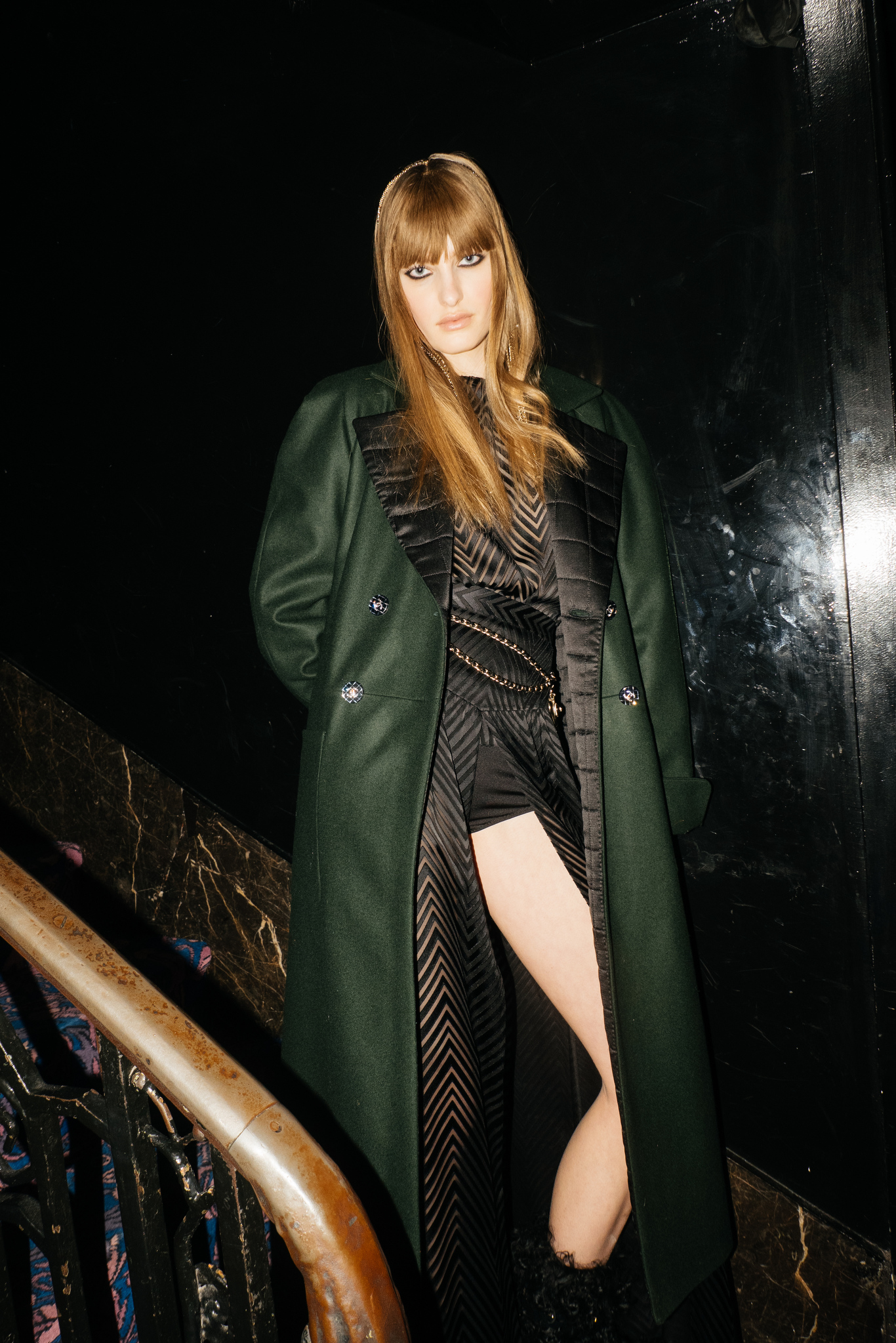 “The collection is inspired by winter sports,” Viard said during a preview at the Chanel studio on Rue Cambon, as models were paired with handbags, ranging from necklace styles the size of powder compacts to shaggy faux fur bags with chain-link straps.

With audiences still banned, she said it felt like the wrong time to hold the show at the Grand Palais, the site of Chanel’s traditional extravaganzas since 2005, which is currently undergoing renovations. This show featured 20 models, instead of the usual 80.

“In a small space like this, it’s cuter than at the Grand Palais – even the big coats look bigger,” Viard said, adding that she wanted to create a sensual mood by showing the models getting changed and touching up their makeup in the cabine tucked behind a bead curtain.

Think of it as the après-ski portion of the brand’s Coco Neige capsule collection, launched in 2018 by late creative director Karl Lagerfeld.

The film toned down the steamier side of Castel – the place is famous for its vermilion-red walls and phallic-patterned carpet – by judiciously splicing black-and-white and color footage, but this collection revealed a flirtier side to Viard, who has previously toggled between chaste schoolgirl silhouettes and Eighties exuberance. 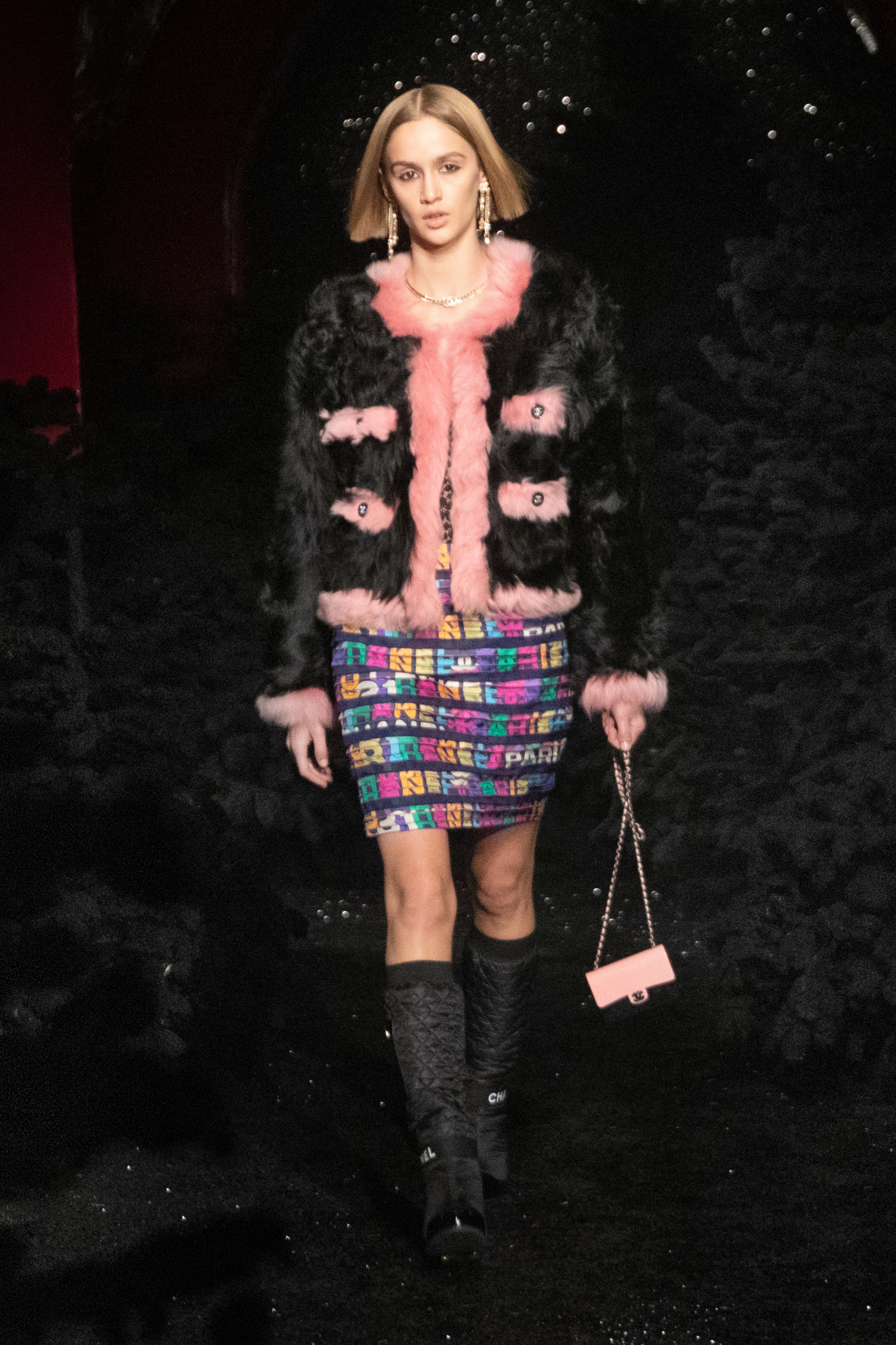 At times it bordered on bad taste: a strappy black fringed dress was accessorized with a rhinestone choker wrapped around one thigh, while lacy bodysuits underpinned everything from logo-covered quilted ski dungarees to tweed bolero jackets with matching wide pants.

Long tweed coats had a timeless allure, while faux-fur versions of the classic Chanel tweed jacket brought to mind Lagerfeld’s irreverent approach to the house’s codes – as did the plethora of logo merch, from faded jeans printed with metallic double-Cs to a multicolored print made from the repeating letters of the Chanel name. 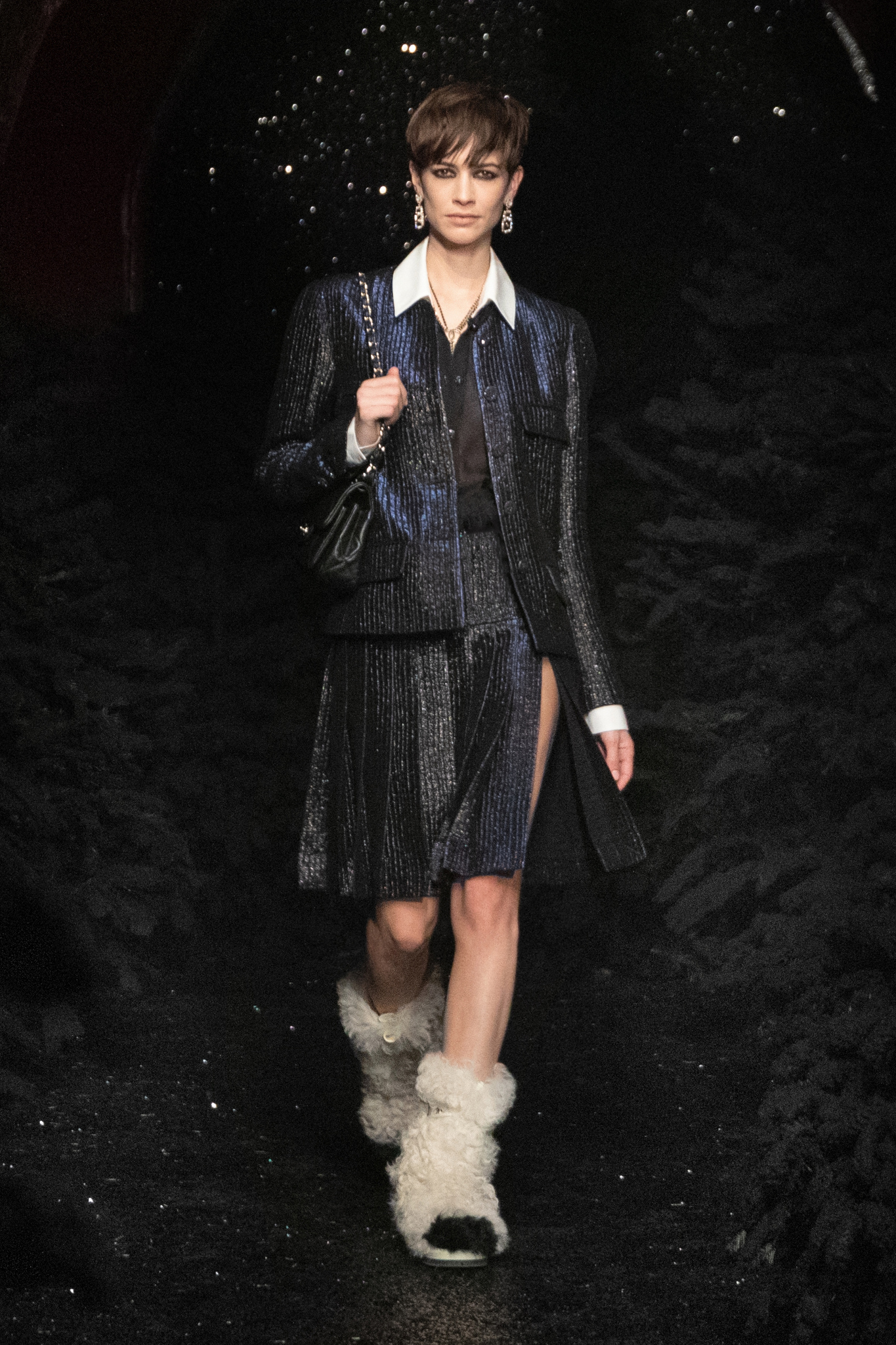 Viard said some of the looks, including a tweed kilt worn over a knitted jumpsuit, reminded her of longtime Chanel muse Stella Tennant, who died in December at the age of 50. To be sure, there was an elegiac tinge to the display, underlined by the opening tune: Diana Ross singing the “Theme from Mahogany.”

The days when the fashion pack will be able to gather in nightclubs to blow off steam still feel remote. Instead, Chanel had friends of the house like Margaret Qualley, Jennie Kim, Angèle and G-Dragon tune in remotely and help with the countdown to the show, as DJ Michel Gaubert spun tracks.

At the end of the film, the models spilled out of Castel in broad daylight and brought the party to the street, joining Viard for a victory lap down Rue Princesse. In these virtual times, all the world’s a stage.