In March of 2019, 50 people were charged for their role in a coordinated effort to buy admission to elite American universities. They included an heiress to the Hot Pockets fortune, Michelle Janavs; the Oscar-nominated actress Felicity Huffman; and the television star Lori Loughlin and her husband, the designer Mossimo Giannulli.

Perhaps the most famous beneficiary of the scheme was Ms. Loughlin and Mr. Giannulli’s daughter Olivia Jade Giannulli, who was accepted into the University of Southern California under the false pretense that her ability as a coxswain would be an asset to the school’s rowing team. (A fabricated athletic profile of Ms. Giannulli, an influencer with close to two million subscribers to her YouTube channel, identified her as a coxswain for the nonexistent L.A. Marina Club.)

Ms. Loughlin and Mr. Giannulli initially claimed to be innocent, only to plead guilty in May after prosecutors released staged photos Mr. Giannulli had furnished of Ms. Giannulli and her sister posing on rowing machines.

Ms. Loughlin was sentenced to two months in prison, and her husband was sentenced to five. Ms. Giannulli was never charged with a crime, nor were any other of the other children who stood to benefit from the scheme.

On Tuesday, Ms. Giannulli, 21, who has been silent on the scandal, appeared on “Red Table Talk,” the Facebook show hosted by Jada Pinkett-Smith; her daughter, Willow; and Ms. Pinkett-Smith’s mother, Adrienne Banfield-Norris. The show has become a destination for celebrities and the celebrity-adjacent to talk publicly about things that they have not talked publicly about before.

Here are a few takeaways from Ms. Giannulli’s interview.

She was ‘confused’ about her application process.

Although no students were charged as part of the federal investigation into the admissions scandal, the extent of Ms. Giannulli’s knowledge about the fraud remains unclear.

While the original F.B.I. complaint noted that some students were “unaware” of their parents’ efforts on their behalf, in a memo recommending prison sentences for Ms. Loughlin and Mr. Giannulli, an assistant U.S. attorney wrote that Ms. Giannulli had discussed with her parents “how to avoid the possibility that a high school counselor would disrupt their scheme.”

After the counselor expressed doubt to a U.S.C. admissions official that Ms. Giannulli was involved in crew, the memo noted, her father “aggressively” confronted the counselor in person, and asked why he “was trying to ruin or get in the way of” Mr. Giannulli’s daughter’s “opportunities.” Evidence in court included a falsified résumé outlining Ms. Giannulli’s purported athletic career.

During the “Red Table Talk” discussion, Ms. Giannulli described her awareness of her parents’ machinations in vague terms.

“I didn’t really 100 percent understand what just had happened,” she said, referring to the scandal’s aftermath. “Because there was a lot that, when I was applying, I was not fully aware of what was going on.”

“I was definitely confused when this all came out,” she continued. “And I went and confronted them about everything. They didn’t really have much to say, except, like, ‘I’m so sorry. I, like, really messed up in trying to give the best to you and your sister.’”

She said that reading reports about her college application and credentials was disorienting. “I wasn’t aware of what was going on, because I did work hard,” she said. 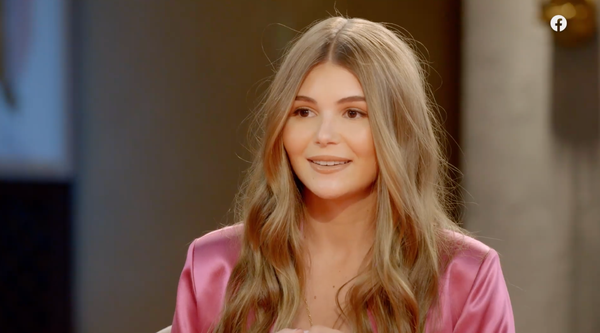 Although Ms. Giannulli stopped short of claiming active participation in the fraud, she used her time on “Red Table Talk” to offer her first qualified public apologies.

“For so long, I wasn’t able to talk about this because of the legalities behind it,” she said. “I never got to say ‘I’m really sorry that this happened’ or ‘I really own that this was a big mess up on everybody’s part.’”

She later added, “I think what was important was for me to come here and say, ‘I’m sorry. I acknowledge what was wrong.’ And I wasn’t able to say that for so long. So I think people almost thought, ‘Oh, she must not care.’”

By contrast, at least one other student whose mother pleaded guilty to fraud and conspiracy as part of the same federal investigation issued a statement of apology almost immediately after news of the scandal broke.

“I am upset that I was unknowingly involved in a large scheme that helps give kids who may not work as hard as others an advantage over those who truly deserve those spots,” Jack Buckingham wrote in a statement to The Hollywood Reporter on March 13, 2019, one day after his mother, Jane Buckingham, was arrested. (Ms. Buckingham was secretly recorded plotting to give her son a fake ACT exam so that he would be unaware his apparent high score was not genuine.) “For that I am sorry though I know my word does not mean much to many people at the moment.”

Mr. Buckingham noted in his statement that he had “been advised not to speak on the matter at hand.”

She didn’t initially understand why her parents’ actions were wrong.

Ms. Giannulli opened the interview by talking about the positive parts of seeing her parents brought to justice.

“I think that this has been like a really eye-opening experience for me and situation, and although there’s a lot of negative around it and there’s a lot of mistakes and wrongdoings, it’s led me to have a completely different outlook on a lot of situations,” she said.

But when the news broke, she said later in the interview, she wasn’t sure why people were so angry that her parents had paid her way into college.

“I remember thinking, ‘How are people mad about this?’” she said, adding that at the time she thought, “I don’t really understand what’s wrong with this.”

Ayesha Haleem, a student at the University of California, Los Angeles, told The New York Times shortly after the scheme became public: “The higher education system has always benefited people who come from privileged backgrounds.”

Ms. Giannulli said that such privilege was so abundant among her peers that it was imperceptible to her. “A huge part of having privilege is not knowing you have privilege. And so when it was happening it didn’t feel wrong,” she said. “It didn’t feel like ‘That’s not fair, a lot of people don’t have that.’”

She was not entirely welcome at the Red Table.

Before Ms. Giannulli sat down at the table, Ms. Banfield-Norris, known on the show as Gammy or Gam, said that she would have preferred not to have her on.

Ms. Pinkett-Smith said that Ms. Giannulli had asked to come on the show. Ms. Banfield-Norris said that she had “fought” Ms. Giannulli’s appearance “tooth and nail.”

“I just found it really ironic that she chose three Black women to reach out to for her redemption story,” Ms. Banfield-Norris said. “I feel like here we are, a white woman coming to Black women for support when we don’t get the same from them. It’s bothersome to me on so many levels. Her being here is the epitome of white privilege.”

Ms. Pinkett-Smith argued back saying that she would not want to be ungenerous to others only because they were not generous to her.

“People look at us, they say, ‘you’re Black and you’re female’ and they automatically put us in a category,” Ms. Pinkett-Smith said. “So looking at her as being white, young and privileged and then putting her in the category, it’s the same thing. So I just see it as this cycle.”

Ms. Banfield-Norris responded, “It’s not our responsibility to raise her consciousness.”

She wants to give back.

Though Ms. Giannulli expressed contrition and said that she was not deserving of pity, she added that a relatively recent experience had played an outsize role in helping her understand what made people so angry at her and her parents.

A few weeks earlier, she said, she had volunteered in the Watts neighborhood of southern Los Angeles, working with children in an after-school program. Talking to them, she said, “shifted my whole mentality.”

“They all were so little, but they were so grateful for that education, that after-school place that they could go, away from their neighborhood,” she said. “I was watching all of them, and I was thinking about my situation and that I took all of that for granted.”

She said that the experience made her want to give back to others, though she did not specify whether she would continue to volunteer in Watts or elsewhere.

“I’m just at the beginning, and I want to continue doing stuff and finding more things to do,” she said.