A GIRL was left mortified after her cousin chose to demote her as maid of honour because she felt she was "too fat" and had "no control" over her diet.

In a savage text exchange, the cousin refused to be "embarrassed" for stripping the girl of her maid of honour duties and showed no remorse as she brutally slammed her relative. 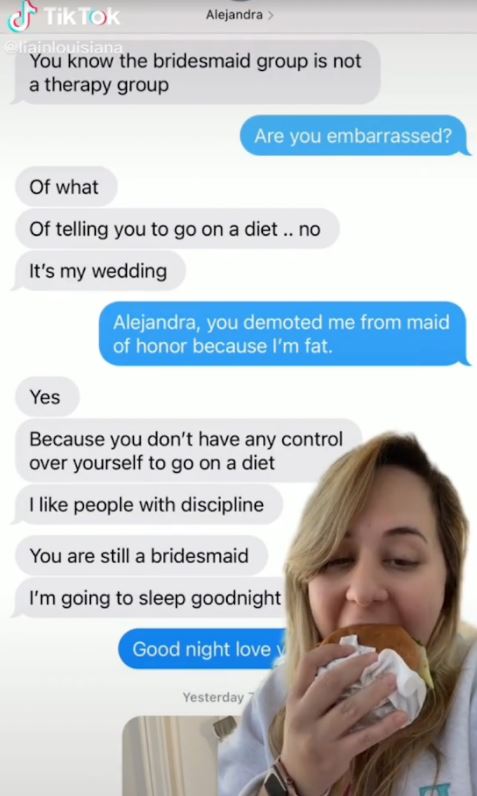 TikTok user Lia found herself going viral online after she shared the harsh messages she received from her cousin in a video that has been watched over 108k times.

She could be seen asking her cousin if she was "embarrassed" for fat-shaming her, with the cousin showing that she clearly wasn't sorry.

"Of what? Of telling you to go on a diet… no. It's my wedding," the cousin responded.

The girl then pressed the cousin again, as she replied: "Alejandra, you demoted me from maid of honour because I'm fat."

Still, the cousin stood by her decision as she brutally replied: "Yes. Because you don't have any control over yourself to go on a diet.

"I like people with discipline. You are still a bridesmaid. I'm going to sleep, good night."

Being the bigger person, the girl, who revealed the cousin is "like a sister" to her, simply text back: "Good night, love you."

The girl was seen tucking into a burger in the corner of her video, as she joked: "Chick-fil-A after this text exchange with my cousin."

Hundreds of people were seen commenting on her post, with many urging the girl not to put up with her cousin's behaviour.

"I see you excusing her behaviour in replies so I just want you to know there is absolutely no justification to be treated like this. Especially by fam (sic)," said one person.

You don't have any control over yourself to go on a diet. I like people with discipline

Another commented: "I can see how understanding and compassionate you are in the comments but I am begging you to see that she has no respect for you & not to just take it."

A third wrote: "You legit said. Goodnight love you. Like she didn't just put you down and not give AF. Girl. Respect. Yourself."

"I really hope that this is a joke…," commented one shocked viewer, while another added: "I see you're close and love her, but you don't deserve to be treated like this by someone you love."

In a follow-up video, the girl shared more "wedding drama" and revealed she was no longer attending her cousin's big day.

Without going into too much detail, she explained that she had been uninvited and was now determined to "respect" herself more after being treated horribly by her cousin.

"More wedding drama, because what is a wedding without bridesmaid drama. I'm not going to the wedding. I have cried all afternoon… I am uninvited," she said.

"I'm not going, I'm returning my bridesmaid dress on Monday and that's that."

The girl vowed: "First step to respecting myself, you guys said that I should, you know respect myself and not let people treat me like c**p… I am trying. I am doing my best."

"That wedding was gonna be lame anyway," said one viewer in support.

Another shared: "Good. You deserve better! You're beautiful and one day somebody is going to be honoured to have you in their wedding!"

Meanwhile, furious bride slams bridesmaid who hijacked photographer and asked for engagement shoot with her fiance on her big day.

Plus, an 'immature’ mum-in-law goes ahead with outfit change at wedding after being told no – & accuses bride of ruining HER day.

And one 'self-absorbed’ bridezilla held an ‘auction’ for potential bridesmaids to bid for a place in her wedding.