Home » Fashion » My neighbour wrote me a judgmental letter over the contents of my garden – they called me 'trashy'… who's in the right? | The Sun

A FAMILY who left their old sofa outside for collection have received a seething letter from neighbours.

The family – from Hull – had left their old sofa out of the front of their new house, ready to be collected for disposal. 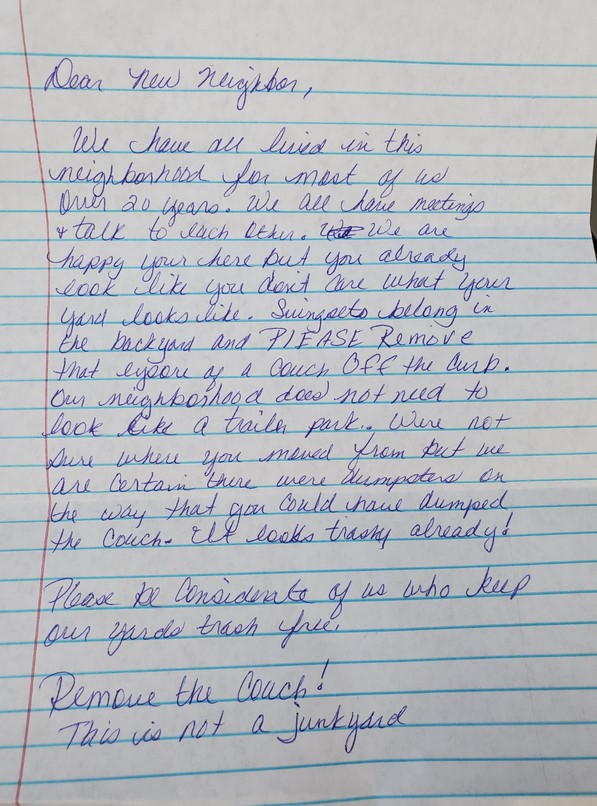 A new swing had also been installed for their children to play on.

Unfortunately, both these acts have attracted the ire of an anonymous letter-writer who accused them of bringing the street into disrepute and lacking pride in their home.

One of the family members posted the letter on Reddit, which read: "Dear new neighbour, we have all lived in this neighbourhood for, most of us, over 20 years. We all have meetings and talk to each other. We are happy you're here but you already look like you don't care what your yard looks like."

The letter caught the public's imagination, attracting over 7,000 comments.

It continued in a similar tone, demanding they move the swing to the back garden and calling their old sofa an "eyesore" – questioning why they didn't drop it off at a refuse centre for disposal before arriving at their new home.

"Remove the couch! This is not a junkyard", the angry letter concluded.

The individual who penned the note didn't disclose any personal information.

It proved to be a popular topic, quickly surpassing 7,000 comments, with users sympathising with both sides.

One person wrote: "There is an extremely high chance the person who wrote this is actively despised by the rest of the neighbourhood already."

Another weighed in: "Where I live you put anything made of metal up by the road and a scrapper will have it gone by dark.

"No need to call anyone and you know that much of it will be recycled instead of landfilled."

But not all leapt to the family's defence.

One queried: "I mean how long was the couch on the curb, did you put it out the day after a pick up and it sat there for an entire week?"

Another chimed in: "Personally I don’t think you should have left a couch in the street and you should put the play set in the back – kids and cars don’t mix and that’s not cool to leave your rubbish out."

Speaking to The Sun, a Hull City Council spokesman clarified: "You are allowed to leave furniture on the kerb if you have booked a bulky collection for it to be taken away, otherwise it is considered flytipping."