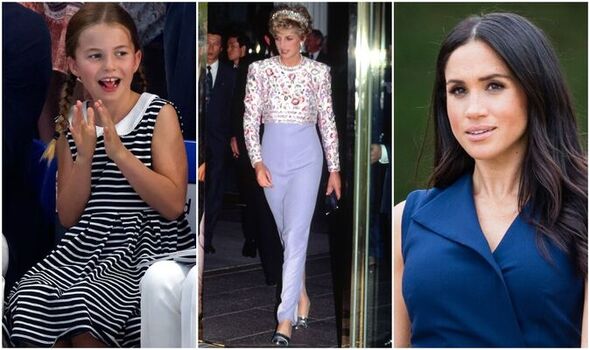 The late Princess Diana has two granddaughters, Princess Charlotte, seven, and Lilibet Mountbatten-Windsor, one. However, according to royal experts, only one granddaughter is likely to inherit a key piece from the former Princess of Wales’s iconic jewellery collection.

Princess Charlotte will have “the pick of the palace jewels” when she is older along with two pieces already in mind for the six-year-old, according to royal commentators.

A recent report claims Princess Charlotte will inherit a “priceless” heirloom owned by Princess Diana instead of Lilibet.

Not only this, but seven-year-old Charlotte will also have “the pick of the palace jewels” once she is old enough because her father, Prince William, is first in line to the throne and she is his only daughter, a royal source told The Mirror.

This royal insider also claimed there are two items that would be best suited for Princess Charlotte to inherit.

One of these is said to be the Spencer Tiara, the very same crown worn by Lady Diana on the day of her wedding to King Charles on July 29, 1981.

The showstopping headpiece had been in the Spencer family for almost a century before the royal wedding and had been worn at the weddings of her two older sisters, Lady Sarah McCorquodale and Lady Jane Fellowes.

The tiara was partly made from a wedding gift given in 1919 from Lady Sarah Spencer to Lady Cynthia Hamilton, Diana’s grandmother, for her marriage to Viscount Althorp.

The source claimed: “William is quite aware the Earl has daughters of his own, but the two have agreed that Diana’s iconic piece belongs to her first granddaughter.”

Another royal insider claimed Charlotte knows about the tiara through learning about her grandmother Diana, and cannot wait to one day try it on.

They said: “Lottie knows all about her ‘Granny Diana’ – after all, Diana is one of her middle names. She’s also seen pictures of her wearing the tiara,” they told Australian magazine New Idea.

READ MORE: Kate and William use ‘code names’ when travelling

Tradition dictates brides wait until their wedding day before first wearing the piece, so Charlotte may have to wait a while before she can try on the tiara.

It comes as new research suggests Charlotte could become the richest member of the Royal Family when she grows up.

The study from Electric Ride on Cars suggests the Princess will far exceed her older and younger brothers in her fortunes, potentially being worth as much as £3.6billion.

It is thought she has the potential to earn more than her brothers due to the ‘Kate Middleton effect’.

The phenomenon suggests fashion choices of female members of the Royal Family can have a huge impact on fashion trends, which increases their worth.

Kate’s fashion impact has been compared to style icon Diana, whose outfit and jewellery choices influenced much of the 1980s and 1990s fashion.

Prince George is thought likely to amass just under £2.2billion, while little Prince Louis could be worth £721million.

Comparing other children in the Royal Family, Prince Harry and Meghan’s son Archie is estimated to be worth £21.6million when he grows up.