IN an ideal world, all we'd have to do is ask our kids to clean their bedroom and that would be it.

But in reality, getting them to tidy up their mess involves a whole lot of bartering and a temper tantrum (or two). 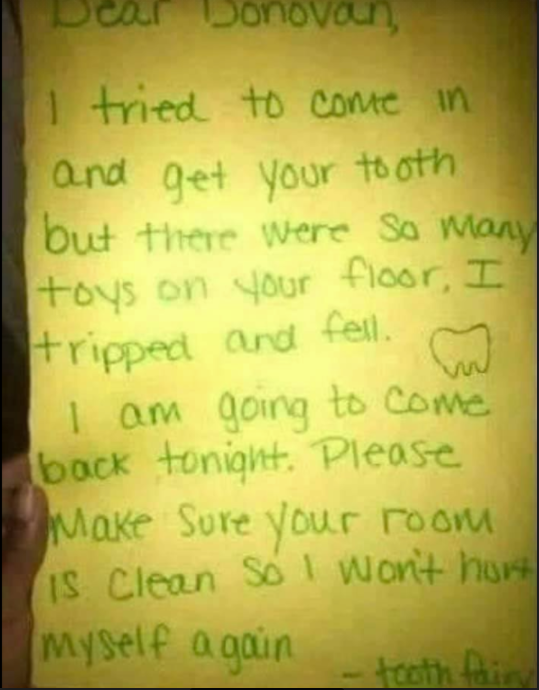 Well if you're also at your wit's end, then you might just want to take a leaf out of this savvy mum's book.

In order to convince her son to clear out his room, his mum decided to write a note from the Tooth Fairy telling him how the mess was making life difficult for her.

The letter read: "I tried to come in and get your tooth but there were so many toys on the floor, I tripped and fell.

"I am going to come back tonight. Please make sure your room is clean so I won't hurt myself again."

The letter was shared on the Facebook group Clean, Declutter, Organise Your Home UK.

And while some parents were impressed with the mum's creativity, others were quick to point out flaws in the plan.

Speaking from experience, one replied: "I tried this with my daughter so she put the tooth under my pillow instead!!"

This is mean and pointless. Have your kid clean the room.

Another added: "Just told my son who is 6 and his response was 'I thought the tooth fairy could fly?'"

Meanwhile, a third fumed: "Just have your kid clean it's room AND let the tooth fairy come.

"No tricks needed. This is mean and pointless. Have your kid clean the room."

A fourth wrote: "Guilty of this. My daughter was heart broken and cried, but the room was tidy after."

Meanwhile, a fifth joked: "I tried this with my daughter and she just looked at the mess and said ‘errm it’s not worth it’."

For more parenting stories, this hyper-organised mum shared the clever way she stores her son’s Lego so nothing gets lost.

And this mum revealed the five different cries every baby has and how to know exactly what they want.

Plus this mum reveals genius way to heat up paddling pool so it’s ‘like a bath’ – and it will get kids jumping in.