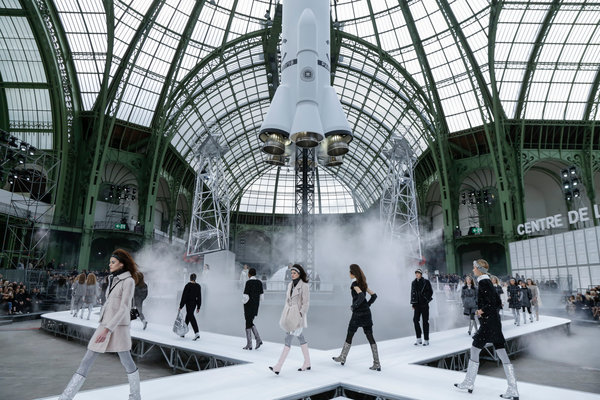 In March 2017, Karl Lagerfeld, perhaps the greatest master of the viral social media moment a fashion show had ever seen, docked a rocket ship under the glass dome of the Grand Palais in Paris for his Chanel show — and then made sure, as the models strutted around it in astronaut-print frocks, that it had actual blastoff.

That was a few weeks after Nick Graham, the former chief underpants officer of Joe Boxer, held a show at New York Fashion Week: Men’s, for his namesake line. The show was entitled “Mission to Mars,” and it featured Buzz Aldrin, the lunar module pilot on the Apollo 11 mission, as its closing model.

And that was just over a year before Heron Preston teamed up with NASA to create a line of streetwear splashed with the space agency’s logo, which was itself around the time Virgil Abloh closed his first Louis Vuitton men’s wear collection with a model in a silver space poncho.

“I always say, space is the new black,” said Mr. Graham, who on Tuesday sponsored the annual Kennedy Space Center gala, a blowout in honor of the moon landing that included a Swarovski-crystal-covered mini-rocket ship award for the best dressed in space-inspired clothing.

In honor of the event Mr. Graham also made a limited-edition NASA bomber jacket in silver or black satin with a lining featuring the Saturn 5 rocket.

Just over half a century ago, the space age caught the imagination of the fashion world and changed how we all dress, ushering in an era of liquid mercury frocks and go-go boots; of synthetic fabrics and plastic fantastic technological innovation.

The influence of the intergalactic has waxed and waned over the years, but when it comes to wardrobes, the 50th anniversary of the Apollo 11 moon landing — not to mention President Trump’s plans for a new Space Force; the imminent release of “Star Wars: The Rise of Skywalker,” the finale of the space saga; the news that NASA plans to open the International Space Center to tourists next year; and the Elon Musk-Jeff Bezos-Richard Branson race to privatize exploration of the cosmos — is bound to set off trends once again.

This time, however, is not quite like the last time.

“Space travel is glamorous, it’s modern, and it’s exclusive,” said Mia Fineman, a curator in the department of photography of the Metropolitan Museum of Art, and the exhibition curator of “Apollo’s Muse: The Moon in the Age of Photography” — all words with great appeal to designers.

Julien Dossena, the creative director of Paco Rabanne, said: “It carries values of excitement and belief in human kind and progress. And that never really goes out of fashion.” It does, however, change.

Originally, after all, the space set — André Courrèges, Pierre Cardin and Paco Rabanne (whose penchant for unnatural materials like plastic and metal, and the links therein, inspired Jane Fonda’s futuristic sex bomb costumes in “Barbarella”) — were united by a sense of optimism and belief in the new frontier, as represented by their clothing.

“For French designers especially, the space age became a metaphor for youth and progress,” said Valerie Steele, the director and chief curator of the Museum at the Fashion Institute of Technology.

White and silver, shine, movement, geometric shapes (especially if they mimicked flying saucers and planetoids), the Milky Way, interstellar imagery: These were the building blocks of a generational new look.

“When you look back at that time, it was almost magical for people,” Mr. Dossena said.

But what happens when you look forward?

As our own attitudes toward space exploration have evolved — have stretched toward Mars; toward the galaxy as a necessary escape, rather than pioneer jaunt; toward the idea of mining other planets in an effort to repair the damage done this one — so, too, have the designs of those whose job it is to interpret what the promise of space means today.

After all, to simply look back is to engage in an exercise in kitsch nostalgia, the exact opposite of what the original space age designers were doing. There’s a reason the new motto of Courrèges is “the future is behind you.”

And a reason Yolanda Zobel, the artistic director of the brand, has made it her mission to replace the house’s signature vinyl, which once upon a time represented a breakthrough, with natural materials.

“The question of the future is the central question,” Ms. Zobel said. “You still think about a new world, but today that means something different. It’s maybe how we do the same thing, but without plastic this time.”

According to Lucie Greene, a trend forecaster, advances in material science as much as any silhouette, is actually what represents fashion’s new frontier, with designers orbiting around the ideas of growing leather from mushrooms, extruding fabric from a 3-D printer, and regulating body temperature — in a time of climate change — through sensors in fabric.

“Now we see the evolution of mankind in a more careful way because we realize what it has meant for the planet,” Mr. Dossena said.

Indeed, there is a notably dystopian tinge to the recent wave of space fashion, a somewhat unnerving reflection of where, exactly, all that futurism took us.

“The emphasis now is on apocalyptic clothing, and protective garments,” Ms. Greene said, pointing to the proliferation of Mylar blankets, jumpsuits, cover-ups, balaclavas and armor in stores. It’s what to wear when the comet shower comes or you have to survive in an atmosphere not necessarily hospitable to humanity.

The implication being: “We messed up planet Earth, so we have to go explore other planets,” Ms. Fineman said. This time, we’re on the dark side of the moon.

Vanessa Friedman is The Times’s fashion director and chief fashion critic. She was previously the fashion editor of the Financial Times. @VVFriedman