Home » Fashion » What Does a Star Chef Wear to Her Very First Met Gala? Halston, Of Course

As soon as Sophia Roe, the chef and host of VICE’s food docuseries Counter Space, learned that she would be working on the 2021 Met Gala dinner, she immediately began to ponder what she was going to wear.

Roe was one of 10 New York chefs chosen to help curate a sustainable, 100 percent plant-based menu for the event. It’s not often that a food personality gets a moment in the spotlight on the steps of the Metropolitan Museum of Art. But although Roe likes to describe herself as a simple cook, she’s so much more: an Emmy-nominated television host, a vocal advocate for food equality and mental health, and a much-needed breath of fresh air within the typically stuffy, non-diverse culinary world. She’s also an aficionado of all things vintage and disco, which is why she enlisted the help of Halston to create a stunning custom cape dress—layered with symbolism and special odes to Roy Halston himself. 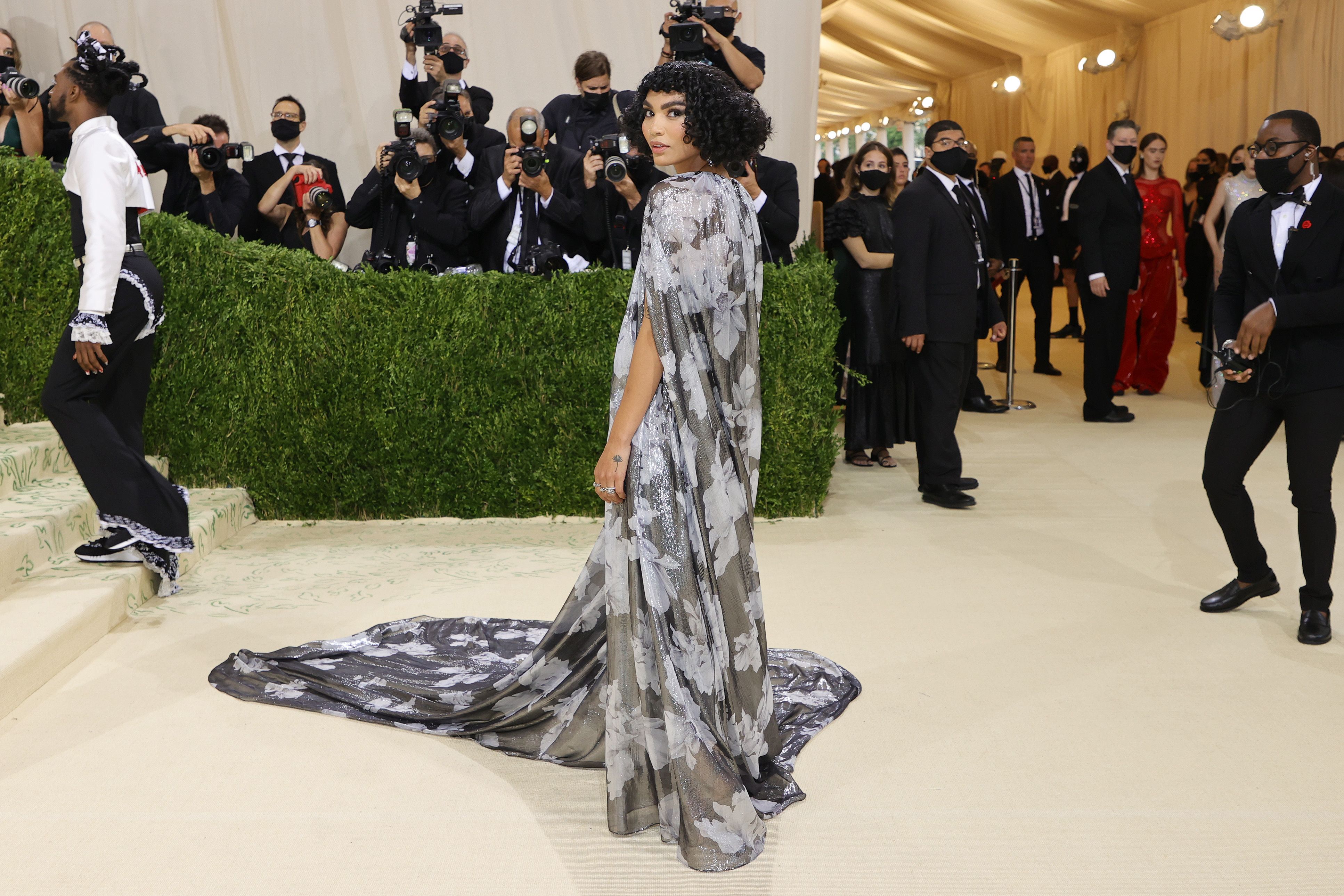 “When I imagine American designers or American fashion, what inspires me most is disco,” Roe tells BAZAAR.com ahead of her final fitting with Halston’s creative director, Robert Rodriguez. “It’s what inspired my haircut, my personal style, it taught me about sexuality! With the theme for the gala being American fashion, there’s going to be a lot of new designers—which is cool—but I thought if we’re going to go down the route of nostalgia, I wanna go hard. Nostalgia is disco for me, and I really wanted to embody that. You can’t talk about that era of time without talking about Halston.”

Following a three-month collaborative process with the Halston team and celebrity stylist Sarah Slutsky, Roe ended up going with a subtly sheer orchid degradé custom caftan gown layered over a scuba neoprene slip catsuit, paired with major metallic silver platform heels courtesy of Stuart Weitzman. The dress’s standout print—which was hand-drawn by Rodriguez—is an homage to Halston’s love of orchids, but it also references the way that disco icons like Donna Summer and Diana Ross often wore flowers in their hair. 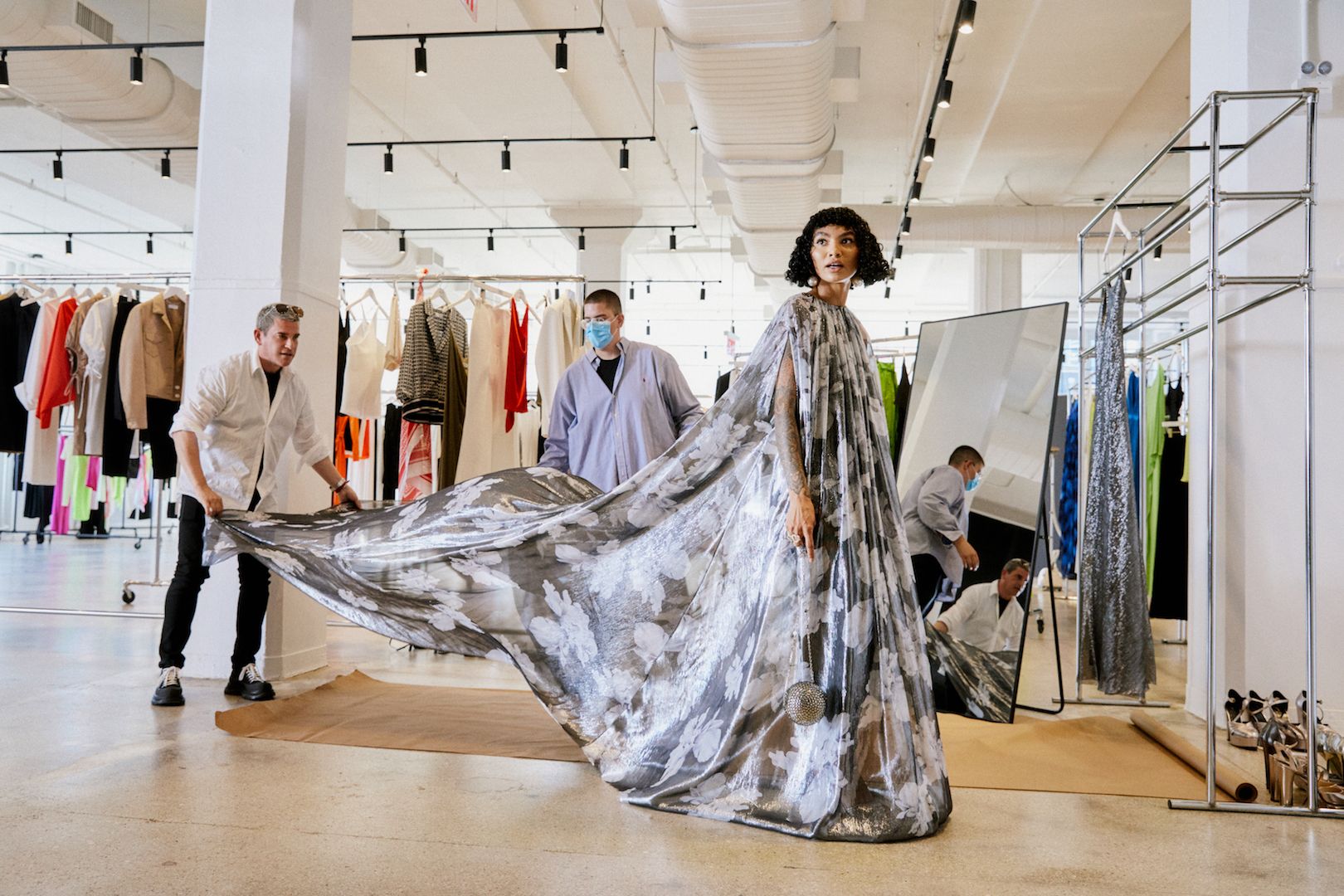 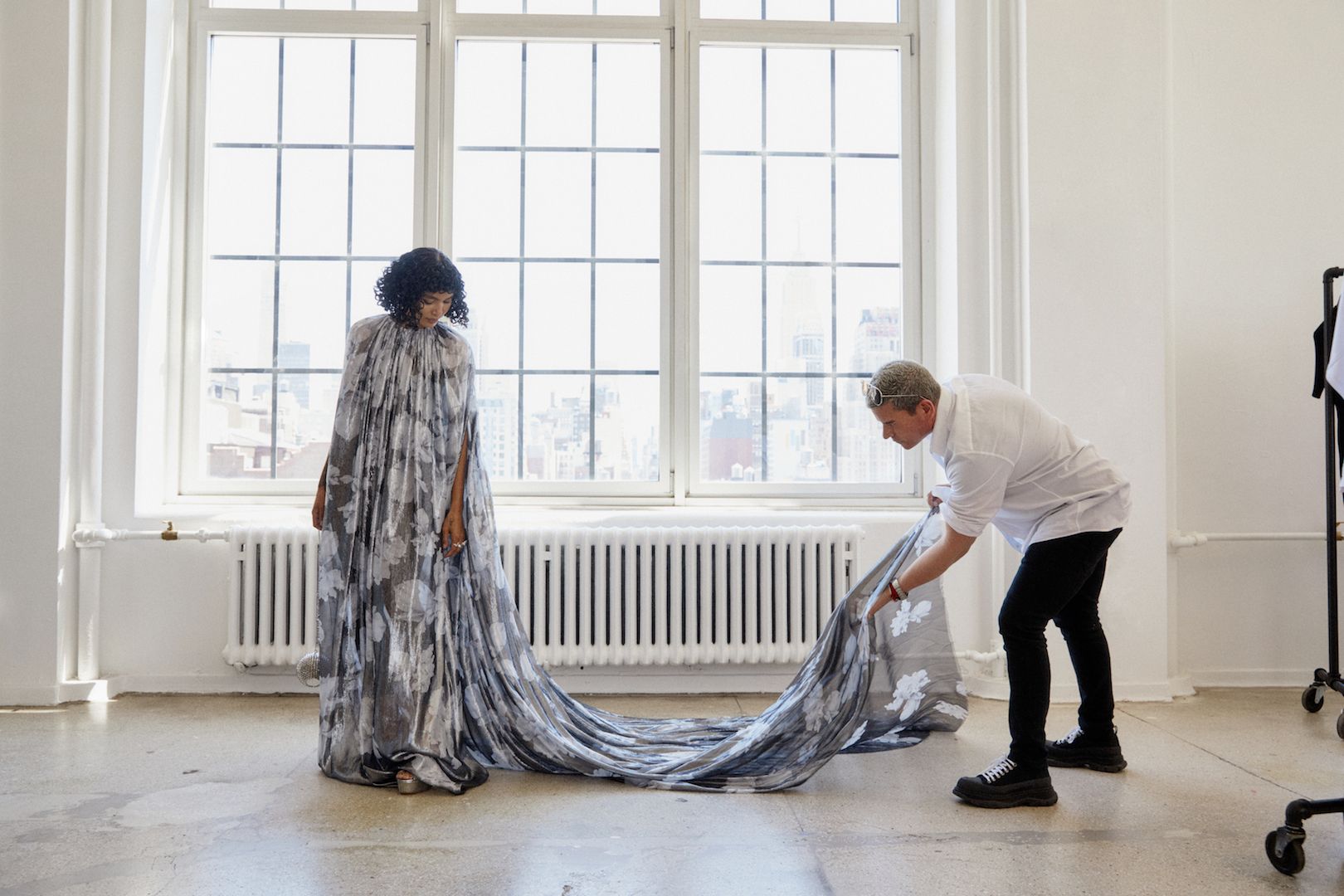 “Halston always said that orchids were a big part of his design process, and that flower represents beauty and simplicity. Given this year’s Met Gala theme, a celebration of American fashion, it means so much to have Halston represented on the red carpet,” Rodriguez tells BAZAAR. “It was a true honor and pleasure to collaborate with Sophia and bring our collective vision to life.” 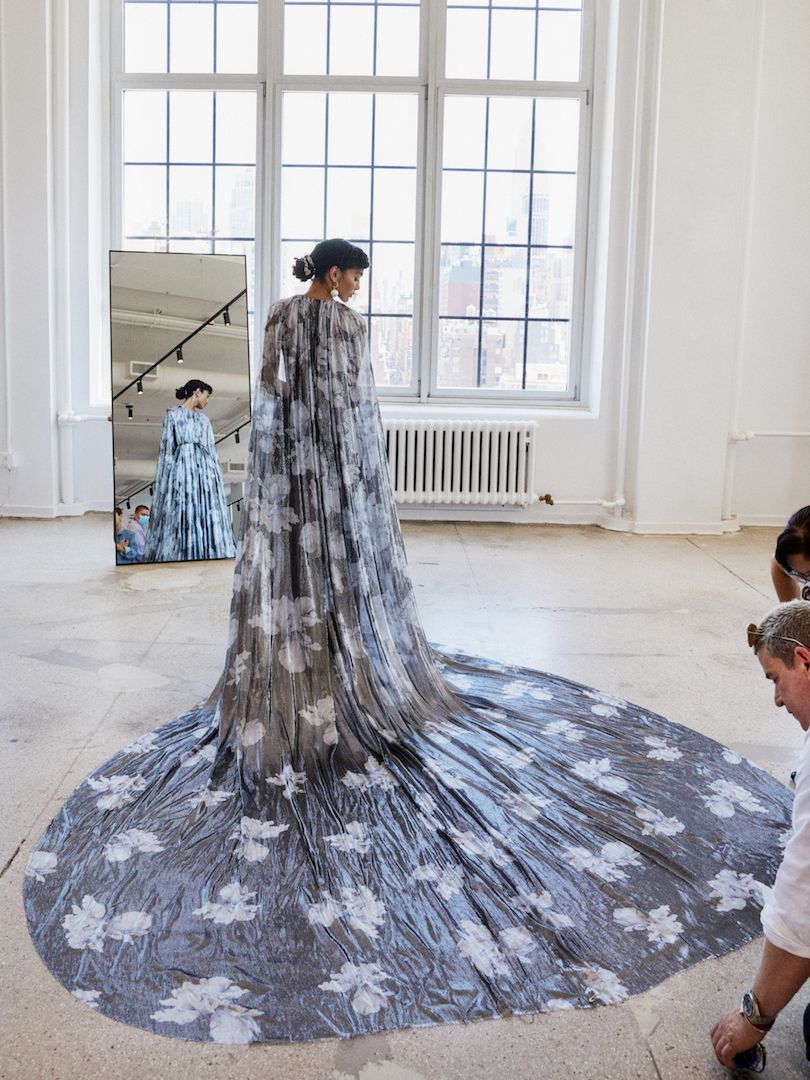 For the night’s beauty look, Roe wanted to accentuate her natural features. She opted for rose-flushed cheeks, bold brows, and a subtly smoky eye, crafted by makeup artist Courtney Kearns. For her hair, Roe embraced her natural curl texture and styled her coils—with help from hairstylist Chuck Amos—in an exaggerated, angular, short bob, paying ode to the Studio 54 darlings who came before her. 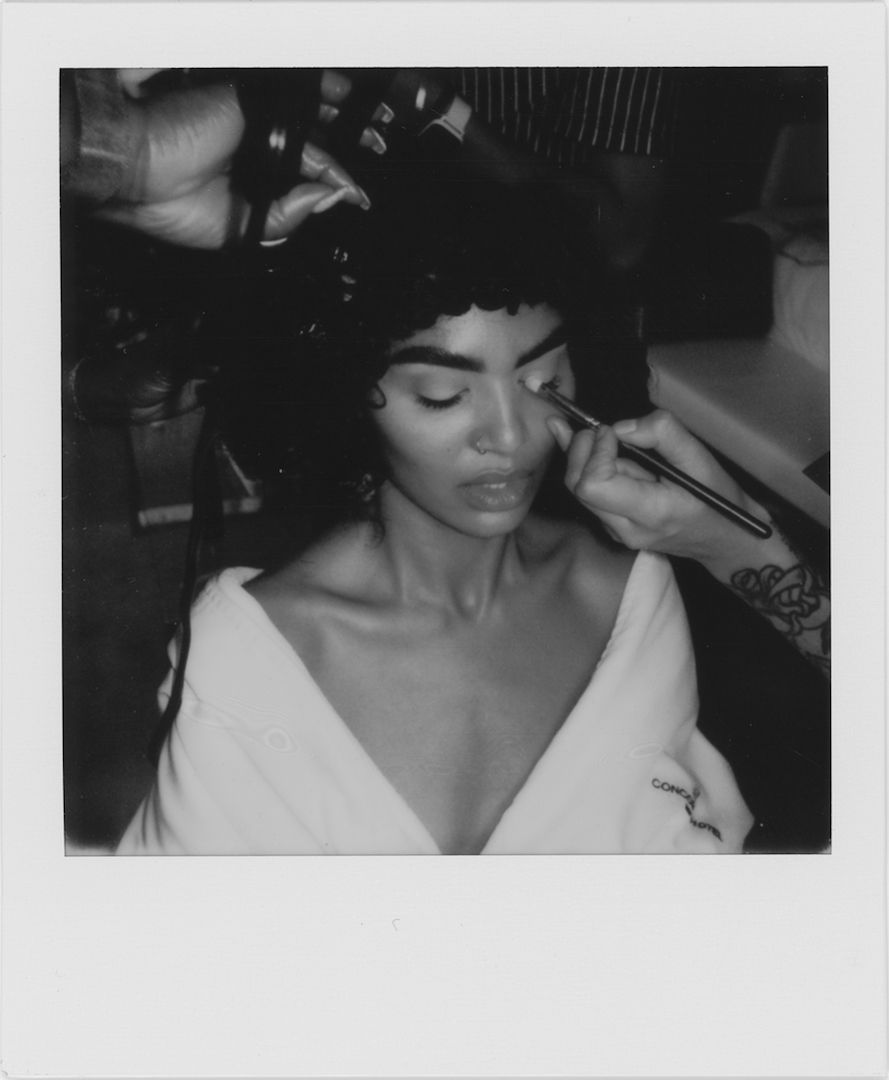 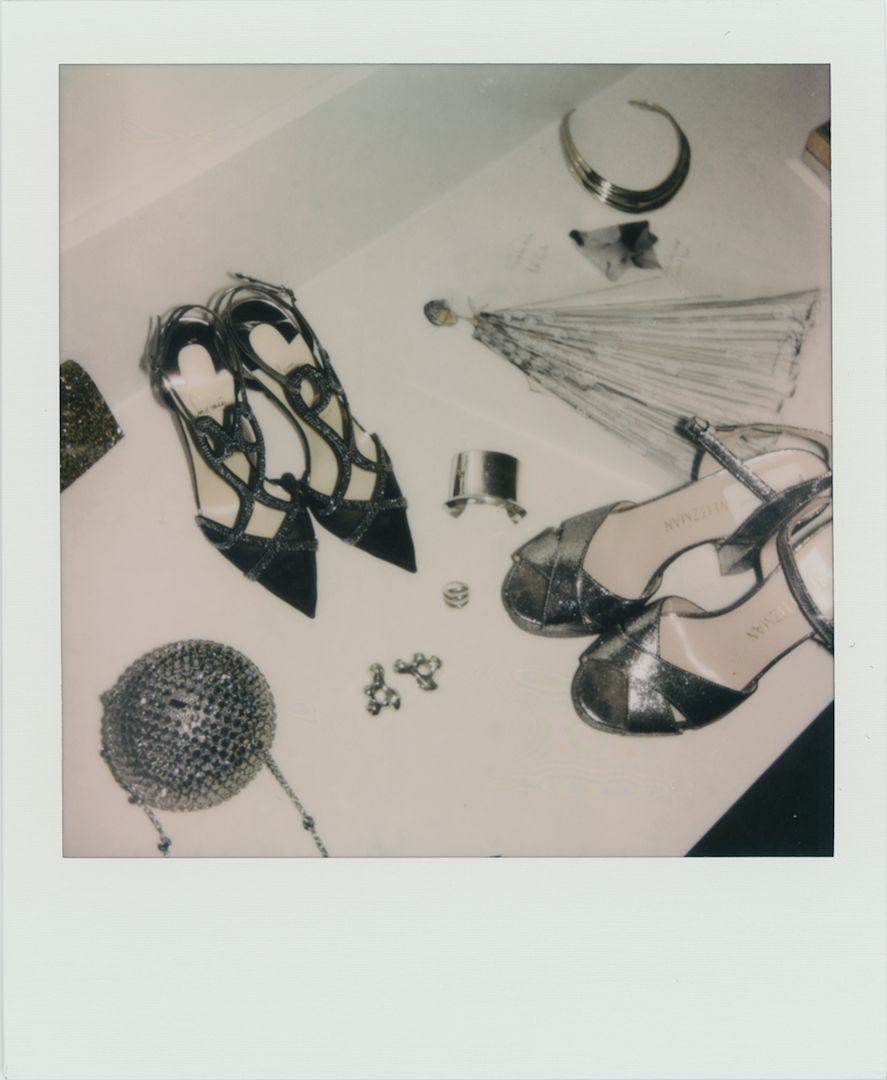 Roe has basked in every moment of the getting-ready process leading up to Monday’s Met Gala: collaborating with the Halston team, planning her menu contributions, and paying homage to her ultimate inspirations. Still, she hasn’t forgotten how much further the industry has to go in terms of diversity and representation, and she hopes that her contributions can make a difference.

“I understand that there are things that are problematic within the fashion and food worlds, but I’m future thinking,” Roe says. “There’s a way we can acknowledge problems and use those things and restructure and make them better—and I felt like that’s an opportunity for that. I think it was smart to make this more of a cultural moment—not just ‘It’s the Met Gala, here’s some famous people and some fashion.’ Let’s make it more about highlighting the artists and cultural figures influencing our world. Let’s make it a moment for New York.”