When Brisbane's Ball Park Music team up with Fremantle four-piece San Cisco for a co-headlining tour in September, the indie-pop acts will perform at some of the country's biggest venues, such as Brisbane's 9500-capacity River Stage and Sydney's 3000-seat Big Top.

Memories of the days when there wasn't such interest in their bands are, however, still vivid. 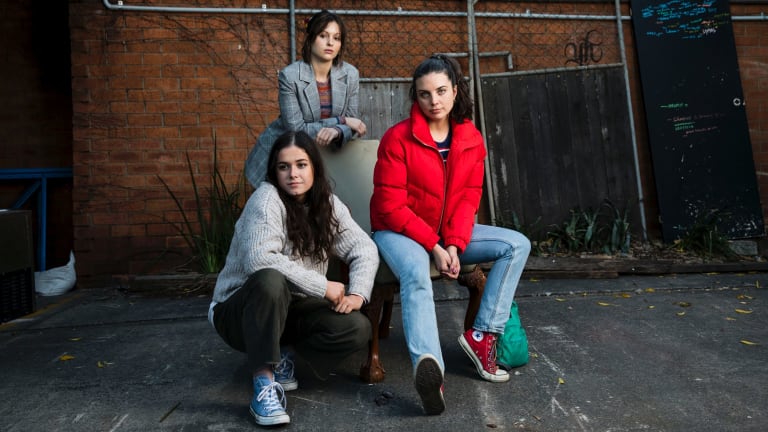 S. Ruby Fields, Scarlett Stevens of San Cisco and Jen Boyce of Ball Park Music are doing a joint tour with their bands.

"We've done that!" adds Ball Park Music bassist Jen Boyce. "Ours was at the Karova Lounge in Ballarat. Someone walked in and thought the gig wasn't on and walked out. I think we played for the support band, the merch guy and the bar people."

Stevens, Boyce and the tour's support act, Wollongong singer-songwriter Ruby Fields, are sitting alongside each other on a couch at Sydney's Young Henry's Brewery, laughing loudly while swapping war stories of life on the road.

There was that time after San Cisco's show in Louisville, Kentucky, when the band were approached by the venue's owner with some sage advice.

"He pretty much told us to flee town, 'cause people have guns and your car will get broken into, there's nowhere safe to leave it," recalls Stevens.

And then there was the moment when the rigours of touring got too much and Boyce threw a phone at Ball Park Music singer Sam Cromack's head.

"I used to have a bit of an anger problem," she says with a comical grimace. "It was late at night, we were staying in a room with bunks, and one of the boys had been pissing me off, so I just pegged [my phone] as hard as I could. I thought I was throwing it at the wall but then I heard Sam go, 'Ow!' I have never felt so bad in my life."

Even Fields, who's just released her debut EP, Your Dad's Opinion For Dinner, and at 20 is the relative newcomer of the tour, isn't immune to the odd horror story.

Thankfully, over the course of Ball Park Music's 10-year career and San Cisco's nine-year innings, the good times have outweighed the bad. Ball Park Music's slot at Splendour In the Grass in 2014, during which they covered Queen's Bohemian Rhapsody, remains a highlight for Boyce. So, too, the night they played their 400th show earlier this year at the Enmore Theatre, and celebrated with a rooftop party.

While San Cisco and Ball Park Music have crossed paths on many occasions – "[Scarlett and I] have been Facebook friends for at least six years," says Boyce – this is the first time they've toured together outside of a festival. And while it's not the only bill they've been a part of that's featured at least one woman in each band, it's rare enough that it takes them a good few moments to recall the last time it happened.

"Over the last few years when we've been choosing our own line-ups we've had the chance to book amazing female artists like Ali Barter and Hatchie," says Boyce. "But we've done so many tours where I've been the only girl, that it feels like the norm. It's amazing to have other sick ladies around."

For Ball Park Music, this tour represents another opportunity to promote this year's acclaimed Good Mood album. For San Cisco it will probably be the last run of dates in support of 2017's The Water. They've spent most of this year working on its follow up.

"It's sounding really good," says Stevens. "Maybe more in the direction of [2015's] Gracetown than The Water, but it's a bit too early [to tell]."

For Fields, the tour is a dream scenario as she's a fan of both headliners. Perhaps a little confronting for 25-year-old Stevens is the fact that Fields was only in year 8 when introduced to San Cisco by her mother.

"We've been saying today that I'm the grandma, Scarlett is the daughter, and Ruby's the granddaughter."

As they discuss their limits on the road – Stevens and Boyce rarely drink before playing; two beers before a show is Fields' maximum – it appears that the wildest person on the tour may well be Fields' mum.

"She's coming by herself to the Wollongong show," she chuckles. "And 100 per cent she's going to get tanked and want to jump onstage."