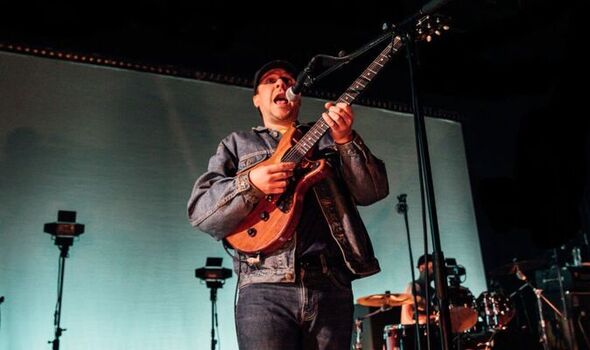 Opening with Brand New Bass Guitar from his hugely popular debut album Panic Prevention, the riled up revellers roar as he spits ‘I spent all my money on this cracked out piece of shit called the bass guitar’.

Third song So Lonely Was the Ballad has a jittery charm that delights tonight’s crowd. During singalong hit Salvador, Jamie T acknowledged a fan holding his crutches aloft in the mosh pit, the moment capturing the chaos of the night. Half way through the set, recent single Old Style Raiders shows him at the pinnacle of his power at the palace tonight.

A landmark show for Jamie T, this has a real homecoming feel as he repeatedly references London in his lyrics throughout the set, as he proudly states “This is the city I grew up in. This is big boy s**t!’. Lurching into his hits, his breathless and frantic performance gives off a skittish nervous energy as he moves around the stage,  tapping his foot manically throughout.

Wearing his Property of Wimbledon hat, referencing his upbringing in the London suburb, he flings flung it into the crowd before the final song. In a warm aside he urges fans to “Make sure everyone is looking after each other”. As he introduces bassist Chris he claims that his band mate has “Probably tattooed half of you!”.

In another hilarious moment he cheekily proclaims “Mumford and sons are not getting him back bitches!” about his band mate. Massive debut album hit If You Got The Money shows as much of the crowd on the giant screens as Jamie himself, their euphoric faces singing along, with the great surprise of seeing themselves up there. His friend and ex-Maccabees guitarist joined on the final two songs Sticks N Stones and Zombie, as Jamie jokes “Don’t say I don’t know the best people!”.

Tonight the show was all about having a good time, his rough and ready performance bringing the party to Ally Pally. As he launched into closer Zombie, he stopped and paused, staring into the crowd and allowing them to start the song in a special moment which rounded off a brilliant night.