October 1st marks the one-year anniversary of the Route 91 Harvest Festival shooting in Las Vegas, where a gunman opened fire on a crowd of country music fans, killing 58 and injuring more than 500. It stands as the worst mass shooting in modern United States history. On Friday night, Jason Aldean — who was performing at Route 91 when the shooting began — returned to the stage in the still healing city for the iHeartRadio Festival with the somber anniversary on his mind.

Just before his 30-minute set, Aldean joined country DJ Bobby Bones to honor Las Vegas’ first responders, many of whom joined the singer and radio personality onstage to rousing applause.

“On behalf of myself and my family and the country music community, I want to say thank you to the city of Las Vegas for your courage, strength and kindness,” Aldean said. “Tonight we are all proud to be Vegas strong.”

About an hour after the emotional remembrance, Aldean performed an extended set in Las Vegas for the first time since Route 91. Perhaps more importantly, he finally finished a set in Vegas, something he didn’t get the chance to do on October 1st, 2017.

Aldean didn’t address the tragedy during his actual performance, but he spoke at length about the upcoming anniversary with reporters before the iHeartRadio Festival appearance. 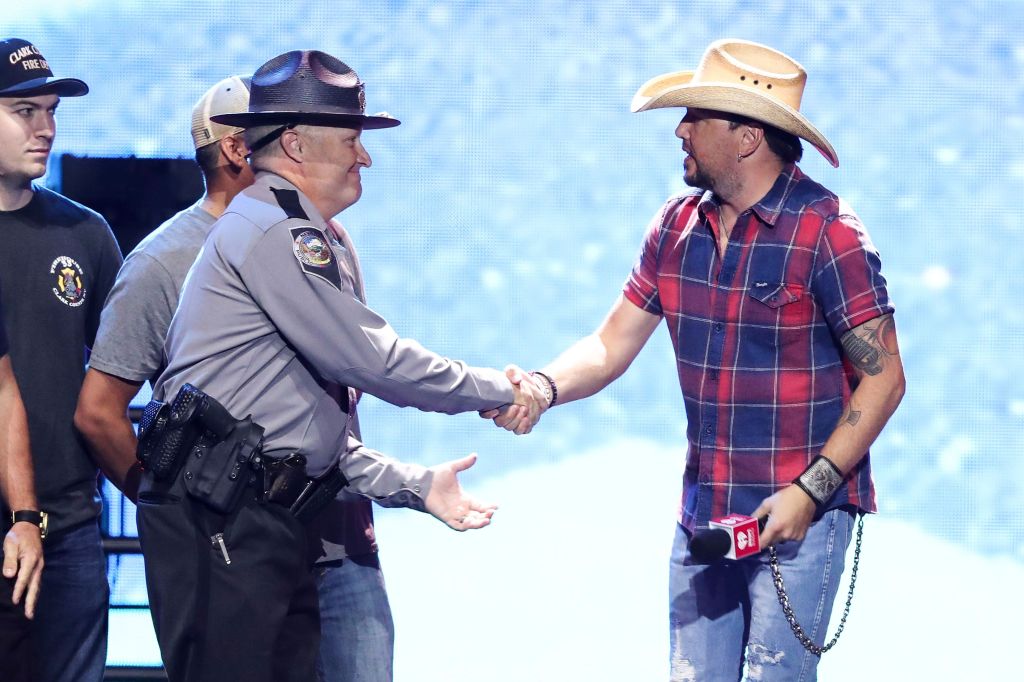 “Every night in our meet-and-greets we’re meeting fans that were here at that show, and I don’t think we’ve had a show this year that we haven’t had survivors come out to the show,” he said. “We do that on a daily basis, not just because the anniversary is coming up.”

After a series of concerts in California later this month, Aldean will conclude his touring season for the year. He’ll also perform his annual Concert for the Cure breast-cancer benefit at his branded restaurant and bar in Nashville on October 3rd.

For the one-year anniversary of Route 91, however, Aldean said he plans to be with the ones he loves. And he’s grateful for the chance to return to a stage in Las Vegas.

“That’s a day that’s hard to forget. We know it’s coming up,” he said. “To be back in Vegas this close to it is, at times, a little weird, but in another sense it’s nice to be back. It’s really our first performance we’ve had since then, so tonight is going to be another step in getting through all that stuff, and coming back here is going to be a big part of it.”