"Don't let anyone or anything clip your wings or wilt your flowers," proclaimed Katy Perry during her first Sydney show in four years.This mantra is one to which the Californian songstress has unapologetically held on tight, even during the storm she weathered following her underperforming fourth album Witness and its "purposeful pop".

It was a roll of the dice – or two gigantic ones from this night's second song Roulette to be precise – to include 10 of its tracks in her 21-song set, given her preceding albums were more commercially successful. 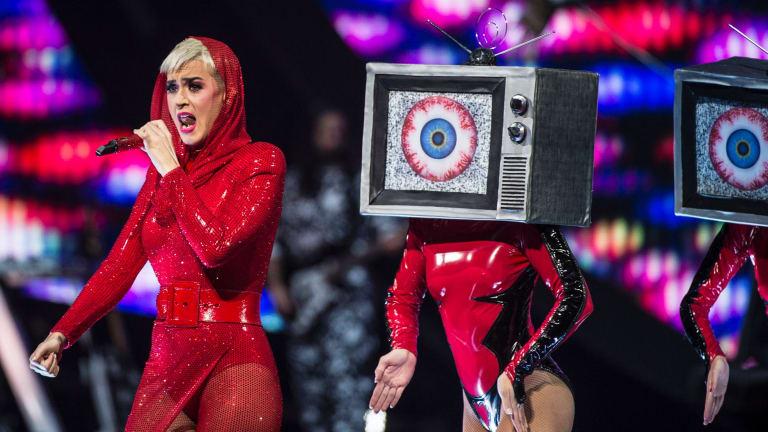 But by delivering a brilliant display of pop panache and ethereal spectacle, this performance might be the one she convincingly got away with.

Constructing a cohesively thematic narrative has never been the star's forte and on this night the excessive and often pantomime-like production was frivolous. But it's difficult not to embrace the weird, wonderful and wacky worlds that earned Perry her superstar status a decade ago.

However, the pin-up doll days are behind this chameleon, who gave California Gurls and I Kissed a Girl an emphatic delivery reflective of her natural progression as an artist.

The colossal, Instagram-worthy props were both dazzling and distracting and included an appearance from the meme-tastic "left shark" from her Superbowl performance, and Cirque du Soleil-like acrobats.

Perry appeared to be trying to keep the show PG-rated for the younger audience but there were plenty of adult elements, not least her provocative lyrics and audacious costumes.

As thrilling as the precisely executed choreography and her band's blistering musical virtuosity were, the night's most powerful moments came when Perry showed off her warm falsetto and stunningly agile vocal runs.

A spine-tingling acoustic Wide Awake, the riveting anthem Power and the vulnerable Into Me You See showed Perry at her finest, but her boppier tracks, including diss track Swish Swish, the brazen Bon Appétit and a riveting Roar, went down a treat.

Closing with a performance of Firework on a giant hand was a slightly cheesy way of suggesting she still has the world in her palm, but as Perry has learned, popularity can be a fickle roller coaster.

She left us with undeniable positivity but her next project will define whether she remains an explosive powerhouse or floats away like the plastic bag she famously sings about.