She’s got the voice of a Bronx angel, the moves of a Fly Girl and a body that launched Google’s image search function — literally. And in the months leading up to its annual Video Music Awards, MTV announced that the Michael Jackson Video Vanguard Award, the highest honor of the night, would go to none other than Jennifer Lopez.

Broadcasting live from Radio City Music Hall on Monday night, Lopez will accept the award at the live ceremony — and undoubtedly regale fans with splashy throwbacks from some of the 55 videos she’s starred in over the years. “I’m feeling nostalgic!!” She told her fans on Instagram last week, where she commemorated her favorite clips from the past two decades. We have a few others in mind:

“If You Had My Love” (1999)
Welcome to Jennifer Lopez Online. It’s 1999, lava lamps are still in vogue and so is the webcam. In the lead video off her debut album, On the 6, Lopez offers 24/7 access to her fans, who follow the singer from room to room via surveillance cameras. Everyone is titillated by the J. Lo cam — a little girl with a doll, some mechanics, a hornball in a muscle tank and somehow even a snorkel diver. “If You Had My Love” was not just weirdly sexy, but weirdly prescient of the days to follow 9/11, when NSA’s omnipresence through technological surveillance became standard for civilians in the States. Pour one out for Edward Snowden.

“Waiting for Tonight” (1999)
Who among us hasn’t found love in a Rainforest Café? The Puerto Rican singer ramped up the steam in her video for “Waiting for Tonight,” a sultry Eurodance hit with a tropical twist — and the definitive track of the Nineties Latin pop explosion. “It was just about to be 2000 or Y2K,” she wrote on Instagram. “Everyone thought the world was going to crash, so the director Francis Lawrence and I just threw the ultimate rave in a rainforest!”

“Play” (2001)
Shortly after the release of her sci-fi feature film, The Cell, Lopez continued to ride that futuristic wave in the video for “Play.” Utilizing the best that CGI had to offer in 2001, she plays a disco diva onboard a flying club craft — which would have made her the ultimate boss in a Final Fantasy game.

“I’m Real (Remix)” feat. Ja Rule (2002)
“I’m Real” heralded the beginning of J. Lo’s hip hop era – and that of the iconic pink Juicy tracksuit, which became the most coveted look in the 2000s. It wasn’t long before starlets like Paris Hilton, Lindsay Lohan and Britney Spears rocked the velour themselves. “We had already shot the first video but then I did this remix with Ja Rule,” said Lopez. “Everyone went crazy for the song so we decided to shoot a video for it. We shot it in one day. The stylists brought me all this fancy couture from all the big designers. But this little known company Juicy sent these sweatsuits for me to chill and hang out in. I loved them so much I decided to wear it in the video with my throwback Adidas and my nameplate and a bun. I shocked everyone when I decided to wear it! It seemed fitting since the song is called “I’m Real”… so I decided to be ME!”

“Jenny from the Block” (2003)
J. Lo’s vouyeur play of yesteryear became a harsh reality for the singer, who faced relentless swarms of paparazzi while engaged to actor Ben Affleck. The pair cheekily addressed the media mayhem in the sultry video for “Jenny from the Block” — which the other half of Bennifer would later regret. Lopez, on the other hand, embraced this chapter in her life as a learning experience. “At that time I truly realized that being an artist meant you have to be vulnerable and bare your heart and soul,” she professed to her fans. “It takes courage [to] really show who you are at any given moment in time … And this was [me] completely. In that moment was who I am and who I will always be … Don’t be fooled by the rocks that I got, I’m still I’m still JENNY FROM THE BLOCK.”

“I’m Glad” (2003)
Directed by David LaChapelle, “I’m Glad” was a dance video as much as it was a music video. “I’d always wanted to work with him,” wrote the former Fly Girl. “So I reached out and said I had this new song and I wanted it to be a dance video. After he heard it he said we should do Flashdance… I said “OK…so like inspired by the movie?” He says “No, exactly like the movie!” SO WE DID IT! We had so much fun recreating the scenes and the styles and putting it to my music! I was SO into it in one setup, I was just doing the MOST, dancing so hard that I threw out my neck! We had to stop production and come back 10 days later to finish it!” The video later became the subject of a lawsuit in 2006 — Maureen Marder, the writer and dancer behind the 1983 biopic Flashdance, alleged Lopez and Sony of committing copyright infringement. The case was eventually dismissed.

“Get Right” (2005)
After the dissolution of her engagement with Ben Affleck — and subsequent marriage to longtime friend, collaborator and fellow Boricua Marc Anthony — Lopez took a necessary break from her music career. Which is why all eyes were on her in the bombastic video for “Get Right,” which raked in four MTV Video Award nominations. Directed by Francis Lawrence (who also directed “Waiting for Tonight”), Lopez plays eight different ladies at the club: including two cholas, a bartender, a nerd and a stripper. Will the real Jenny from the Block please stand up? 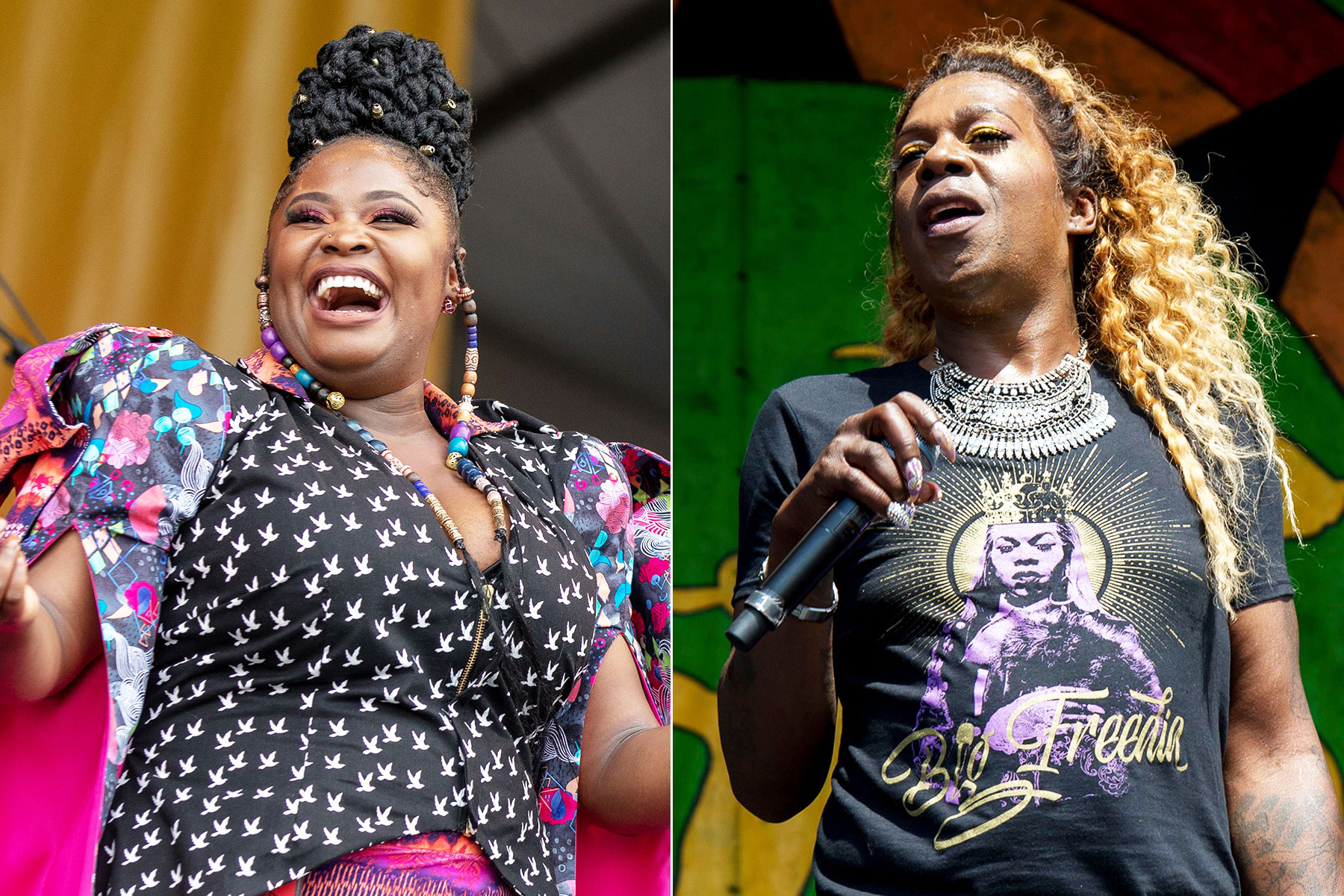 Will Anybody Watch the VMAs This Year?

“On the Floor” feat. Pitbull (2011)
When she called forth “A new generation of party people,” she meant it — “On the Floor” was J. Lo’s first hit single since the 2008 birth of her twins, Emme and Max. The lead single off 2009 album Love?, “On the Floor” was also her first release since departing Epic Records for Island. “I hadn’t put out a record in a few years,” said Lopez. “It’s also my first video to reach [one] billion views on YouTube, and I was the first female artist to do that.”

“I Luh Ya Papi” feat. French Montana (2014)
Throughout her career, J. Lo’s flaunted the occasional glimmer of critical social theory in her visuals — in “I Luh Ya Papi,” she flips Laura Mulvey’s “male gaze” onto the men in the music industry. In a rare meta moment for the Latin drama queen, Lopez and her boisterous girlfriends ask questions like “Why do men objectify the women in every single video? Why can’t we for once objectify the men?” Cue the revival of J. Lo’s iconic green Versace dress — turned power pantsuit — and her entourage of soaked male models with washboard abs. The result is a Lonely Island-style video with a feminist touch. (PS: It’s “papi,” not “puppy.”)

“El Anillo” (2018)
Can we get a Latina Game of Thrones up in here? Lopez’s Spanish-language comeback is crowned by the video for “El Anillo,” in which Lopez plays a queen who demands her suitors fight to the death for her hand in marriage. Decked in gold chain mail, rhinestones and feathers, J. Lo gyrates from frame to frame with purpose. It’s quite the bounce-back from her first Spanish-language offering, 2006’s ballad-heavy Como Ama una Mujer — but this time she’s for real and she knows her worth. “¿Y el anillo pa’ cuando?” she quips to the surviving suitor, or roughly, “Where’s my ring?”