After touring Asia and Oceania at the start of the year, Queen and Adam Lambert were all set for the UK and European leg of their Rhapsody Tour before the pandemic kicked in. Now those concerts, including a 10-night residency at London’s The O2, are set to take place in summer 2021. However, even those dates are far from certain to happen so Brian May has taken matters into his own hands.

The Queen guitarist and Doctor of Physics is on a mission to save Rock and Roll by designing a special airflow system for our pandemic world.

So earlier this week, May headed to a famous Hammersmith concert venue with a special team of experts.

The 73-year-old wrote on his Instagram page: “You asked … why was I visiting the legendary Apollo Theatre (formerly the Hammersmith Odeon – yes ! So many memories !) ?? Well, to save Rock and Roll of course !

“I woke up one morning with the ghost of an idea – a way to try to design an airflow system to make theatres and arenas safe enough in the pandemic situation to allow concerts as we used to know them to take place again.” 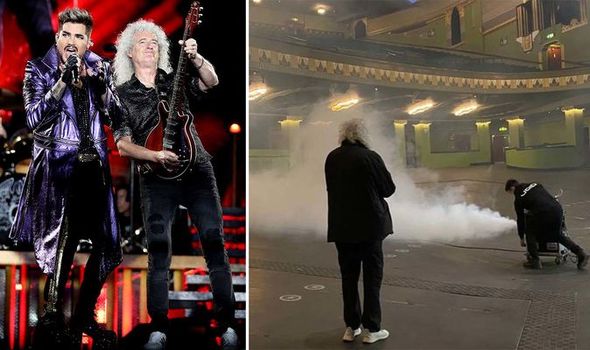 May continued: “So we, a small team comprising me, a Cambridge professor and the two top airflow experts from the London O2 met, socially distanced of course, at the Apollo, to study its ventilation system and test some theories.

“It’s early days, and there are big problems to solve, but if we succeed even in part, it could be a move towards saving the concerts we all miss so much.

“And of course we have in our sights those QUEEN and Adam concerts in the O2 – booked and sold for next June. So the stakes are high. Well, we can dream … Bri.”

Express.co.uk spoke with the Queen legend back in October about the 2021 tour dates.

At the time, May said: “It’s very unclear. First of all, I have to get fit and I’m doing well, but I need to do better.

“Probably another six months of rehab to get right back up to full strength.”

The 73-year-old had some serious health issues this year, including having suffered a heart attack, but is now on the mend.

On Queen and Adam Lambert’s 2021 tour, the star said: “And then what is going on out there next May? I don’t think anybody knows for sure.”

The rock legend said the band hope they can fulfil all the commitments that have been carried over to next year.

He commented: “It’s incredible to me that half a million people are hanging on to their tickets hoping that this will happen, same as we are.

“So I’m hoping we can do all those European dates, come back and do our 10 nights at the O2; it’s all be packed out and everything will be fabulous.

Despite looking at a variety of half-century celebration logos, May and Taylor (the two active members of Queen) have decided they just want to get out there and play.

May told us: “We want to celebrate being alive and being live. That would be the greatest thing to celebrate.

“I don’t really care how long it’s been, to be honest. I’m just grateful that we’re here.”