Home » Music » West Side Story is indestructible entertainment, even if this version lacks heart 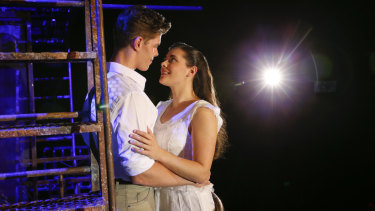 West Side Story is enshrined in the canon of American musical theatre and this almost too reverent revival offers Melbourne audiences a chance to pay homage to a classic.

Revival probably isn’t the right word; the show has never been laid to rest, and there’s always a place for it somewhere, even if the tension it embodies – between impoverished street gangs and the footlights of Broadway – can look absurd to contemporary eyes.

Opera Australia delivers a lively, chocolate-box production with all the bells and whistles. Fans underwhelmed by the Production Company’s 2015 version – which cut a few corners in presentation and featured a less-than-ideal stopgap measure (one performer had laryngitis and the role of Anita was ghost-sung from the wings) – should get their fix this time.

It’s indestructible entertainment, West Side Story, but a difficult show to get to work as intended. Something about it militates against romantic tragedy, despite the exquisite confluence of talent involved in its creation.

There are Bernstein’s soaring songs and the inspired drama of the instrumental music, influenced by jazz and Latin dance. There are Sondheim’s streetwise lyrics, and all that glorious original choreography from Jerome Robbins giving rebellious life to the inarticulate passions of adolescence.

Almost every formal aspect of those is performed impressively here. The orchestra is brilliantly conducted, the ensemble dances with eye-catching synchronicity and flair, and the singing is sublime.

Yet the show didn’t move me as much as it should have.

Part of that is the way the musical rewires the gender politics in Romeo and Juliet. Shakespeare’s Juliet is incredibly tough, defiant to the point of suicide (“If all else fail myself have power to die,” as she says) in pursuit of her own agency and desire; Maria gets “I feel pretty”, survives, and can seem like a flibbertigibbet in comparison.

It’s worse if the acting isn’t top-notch, and while Sophie Salvesani as Maria sings like an angel, she gives a wooden portrayal, straining for a Hispanic lilt and trill so doggedly she ends up with an accent that has never been heard on land or sea. It looks like odd casting, because Todd Jacobsson as Tony is stunningly talented across the board.

In fact, you could divide the cast into two gangs: the triple-threats and the rest. Many of the Sharks and Jets belong in the latter, if only because their acting isn’t sharp enough to suspend disbelief – and without that, the tasteless sight of privileged (and, it must be said, mostly white) performers portraying marginalised “juvenile delinquents” undermines authenticity. The brilliance of the dancing and singing only takes you so far.

Chloe Zuel’s Anita proves a fiery Latin force, dominating with a raw, alluring vitality that gets stamped into genuine pathos through a pivotal scene, disturbingly retouched to foreground sexual violence as the vector of tragedy.

That’s a piercing moment of originality and directorial imagination, and if you wish there were more of them to drag the ode to doomed youth fully into the present, this West Side Story should impress and entertain nearly everyone who sees it.