Is this the end of the A68a iceberg? Enormous block of Antarctic ice that was once three and a half times bigger than LONDON suffers another major split

The ill-fated Atlantic iceberg A68 that broke off from Antarctica in 2017 has suffered another major spilt.

Between Tuesday and Thursday this week, a new smaller iceberg, called A68g, measuring 33 miles in length and 11.5 miles in width, calved from the largest remaining portion of the berg, A68a, in the South Atlantic Ocean.

The new split and the formation of A68g was first noticed by the British Antarctic Survey (BAS) and confirmed by the US National Ice Center (USNIC) on Thursday, using imagery from European radar imaging satellite Sentinel-1A.

The original berg, A68, formed in July 2017, when a huge crack in Antarctica’s Larsen C ice shelf caused the trillion ton iceberg – the third biggest ever recorded – to break off from the icy southern continent.

At the time, A68 measured 5,800 square kilometres (2,240 square miles), making it around the size of Delaware, or more than three-and-a-half times the area covered by Greater London.

But since then the berg has steadily broken into smaller parts, which are being carried north by currents in the direction of South Georgia, an island in the southern Atlantic Ocean.

Scientists are tracking the largest parts of the berg constantly, to see if it collides with the largely uninhabited island and impacts wildlife, but if and when it reaches the open ocean it’s likely to break down due to rougher waters.

Calving ice that breaks off from Antarctica is a big concern for experts – the continent holds enough freshwater to raise sea levels by approximately 2.5 meters. 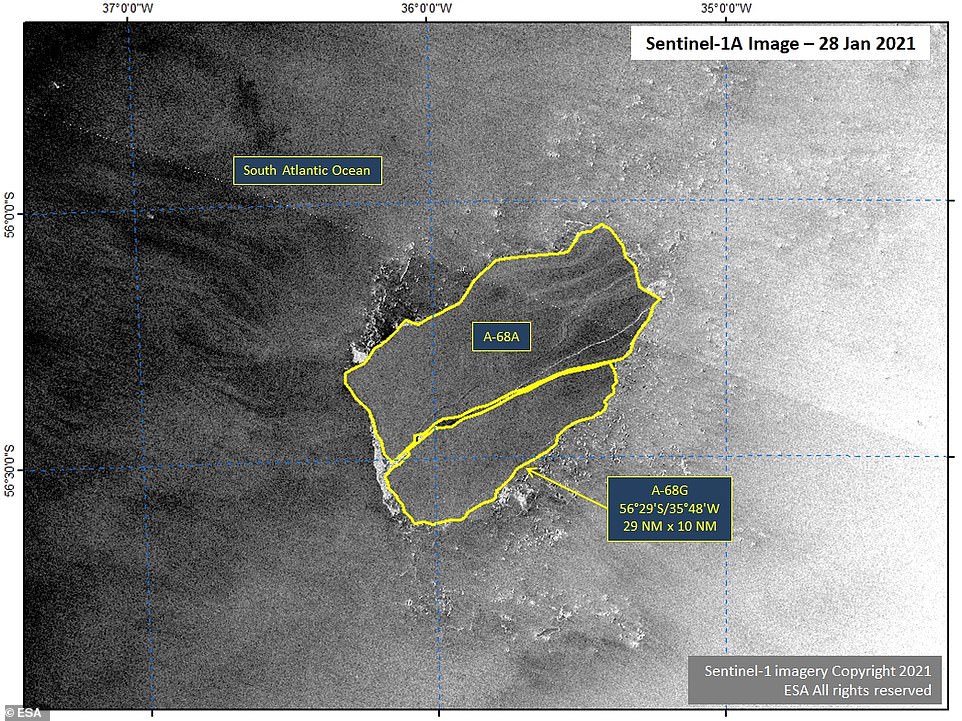 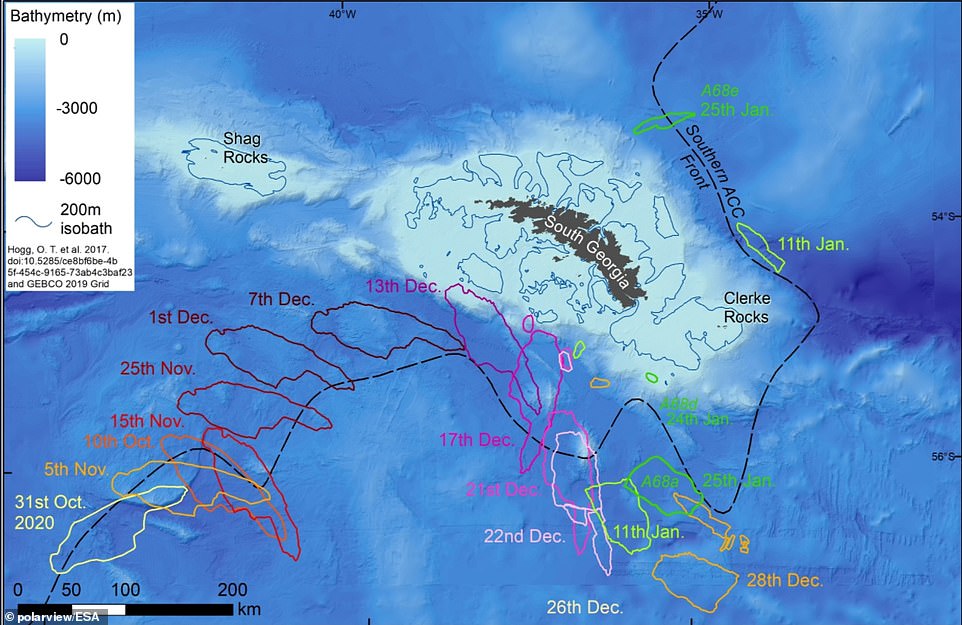 Trajectory of A68 and how this has changed in the last few months. A68 broke away due to iceberg calving – the breaking away of masses of ice from the edge of a glacier. Icebergs often follow the Southern Antarctic Circumpolar Current front, shown on the map as the dashed black line 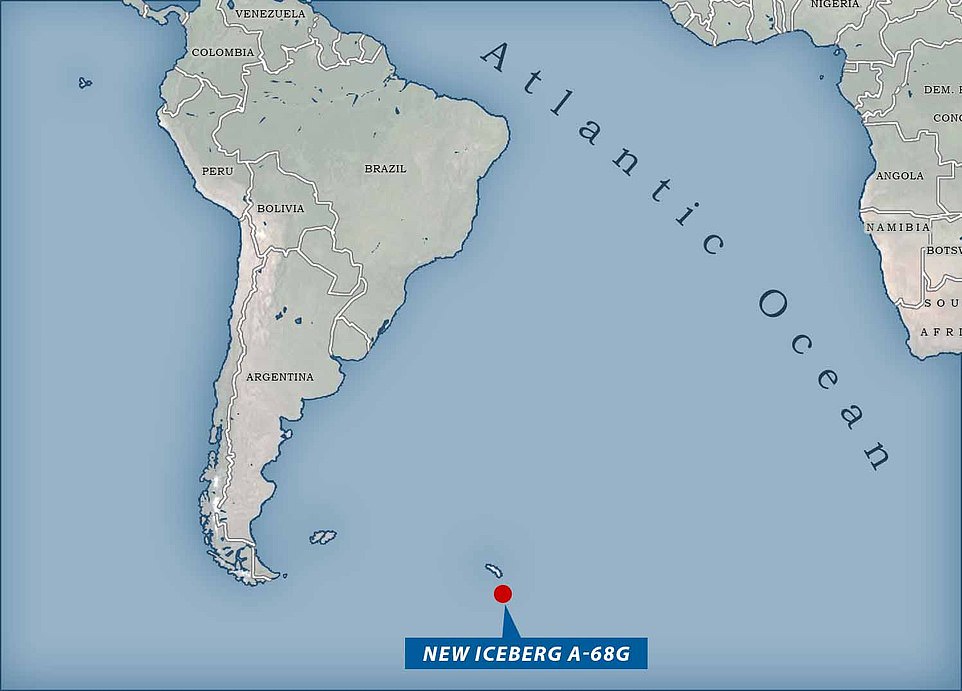 THE TOP FIVE LARGEST ICEBERGS EVER

Years in parenthesis note the date the bergs were recorded.

All the top five calved from Antarctica.

A68 is the only one that remains, making it the world’s largest iceberg as of 2020.

‘Iceberg A68a has broken up into 2 or 3 pieces between 26th Jan and today (28th),’ tweeted Laura Gerrish, mapping specialist at BAS.

‘A68a is the biggest remaining piece of A68 which calved from the Larsen Ice Shelf in 2017.’

Despite this, A68a has been staying in a very similar position for the last month or so, according to Gerrish.

‘The bergs are expected to follow this current though, pushing them back towards and around South Georgia,’ she told MailOnline.

‘We will continue to monitor their movement as they may still ground on the shallower continental shelf around South Georgia, as previous icebergs have done.’

Another large crack developed in A68a near where A68g broke free, and, should that portion calve in one piece in the next few days, it will be large enough to be named as well, according to the US National Ice Center.

When first sighted, an iceberg’s point of origin is documented by the US Nuclear Industry Council (USNIC).

Icebergs’ names are derived from the Antarctic quadrant in which they were originally sighted, combined with a sequential number – in this case, A68.

But these icebergs can be given lettered suffixes if ice calves from already named icebergs.

These letters are added in sequential order – for example, A68g is the seventh portion of the original A68 iceberg.

A68a, the largest portion, is therefore getting smaller and smaller as pieces break off of it.

Before Thursday, this naming process had got up to A68f, a ‘finger-shaped’ chunk that detached from A68a on December 22 last year, along with A68e.

This happened just days after another chunk (A68d) broke off from its northernmost section.

When it broke off, A68e measured 33 nautical miles long and is around 252 square miles in size, more than five times the size of the city of Manchester.

It seems to have circumnavigated South Georgia but it is continuing its journey away from Antarctica and will melt into nothing as it encounters warmer waters.

A68f, which was more square in shape and much smaller at 86 square miles when it originally detached, twice the size of Paris, is due the same fate.

Satellite images in December also revealed A68d broke off from the northern tip of the mother-berg and has stayed close to South Georgia. 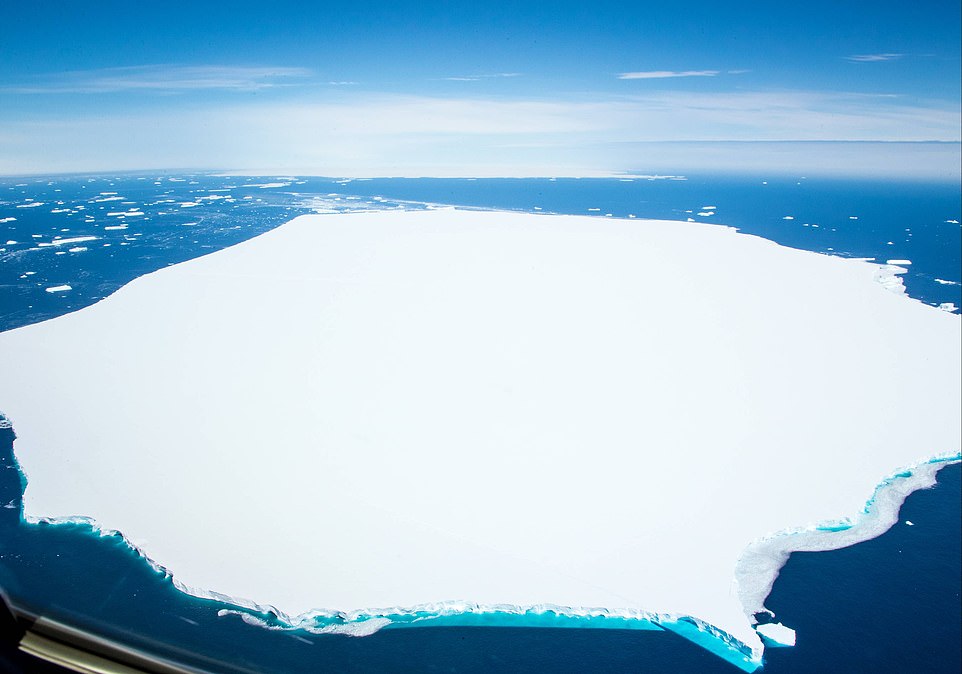 Pictured prominently in the foreground is A68d, the iceberg that broke off from the largest body, A68a, in December. In the background is A68a 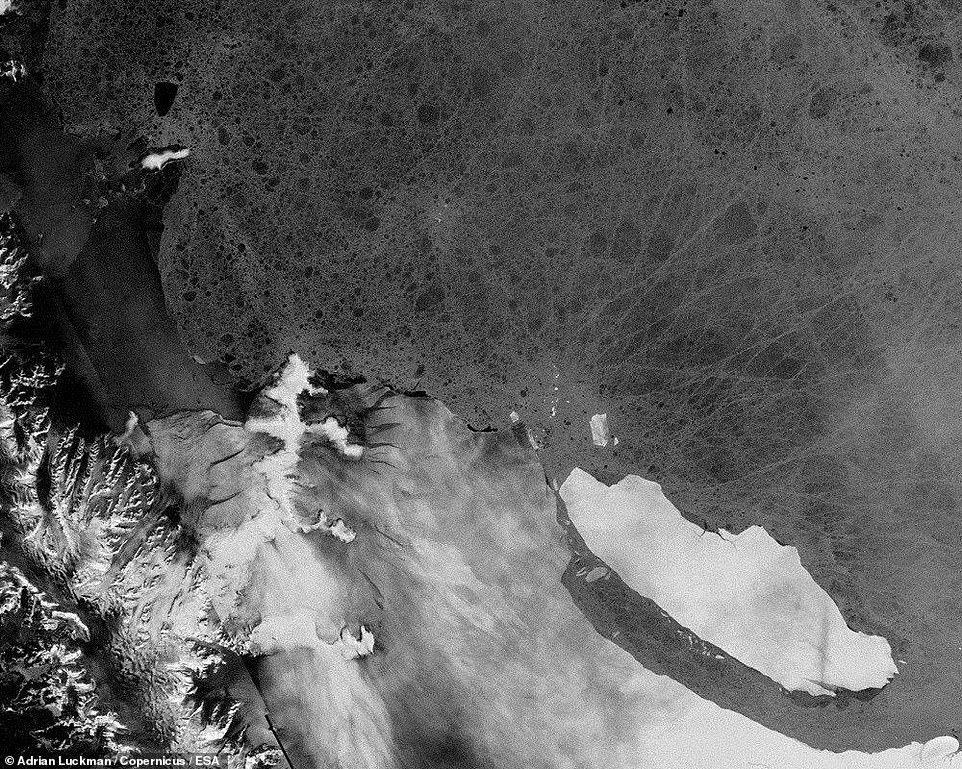 Pictured: A-68 as it looked when it originally broke away from its starting position, when it calved from Antarctica’s Larson C ice shelf in 2017 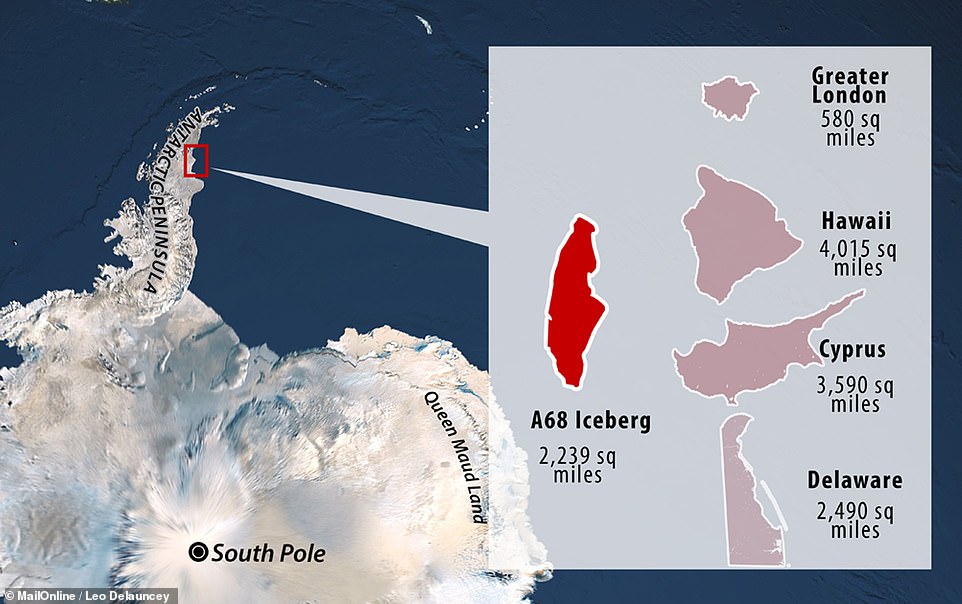 One of the largest icebergs ever to have existed, A-68 is on the move. At 2,239 sq miles it was roughly the size of Delaware (2,490 sq miles), or four times the size of Greater London 580 sq miles, and its volume was twice that of Lake Erie

Tracking of the iceberg has revealed that over the last three months it has got closer and closer to South Georgia.

Scientists are concerned about the impact it could have on the unique biodiversity of the island, which does not have a permanent human population.

Due to the sheer size of the iceberg and its thickness of the two largest pieces (A68a and A68g), it could get stuck in the waters around the island, potentially preventing seals and penguins from hunting in the waters.

Careful ongoing analysis of the Arctic giant’s thickness have shown it is getting thinner, potentially contributing to the recent fracturing.

‘With a thickness to length ratio akin to five sheets of A4, I am astonished that the ocean waves haven’t already made ice cubes out of A68,’ Professor Adrian Luckman glaciologist and professor of geology at Swansea University, told the BBC last year.

The loss of thickness with area means A68a is barely a third of its initial bulk but could still get stuck near South Georgia and pose serious problems.

WHAT IS THE A-68 ICEBERG AND WHAT CAUSED IT TO BREAK AWAY FROM ANTARCTICA?

In July 2017, a huge crack in Antarctica’s Larsen C ice shelf caused a trillion ton iceberg – the third biggest ever recorded – to break off from the icy southern continent.

The huge chunk of ice, dubbed iceberg A-68, measures 5,800 square kilometres (2,240 square miles), making it around the size of Delaware, or four times the area covered by Greater London.

Since A-68 broke away, it has remained unclear what will happen to the giant mass, with fears it could break up into pieces too small to track on satellite, and drift into shipping lanes.

In July 2017, a huge crack in Antarctica’s Larsen C ice shelf caused a trillion ton iceberg – the third biggest ever recorded – to break off from the icy southern continent. These detailed images were captured by instruments aboard Nasa’s Landsat 8 satellite

Experts have found that cracks are still growing on Larsen C, and if they continue to grow, it’s possible that the ice shelf could collapse.

If all of Larsen C collapses, the ice it holds back might add another 4 inches (10 cm) to global sea levels over the years.

Many scientists argue that a calving event was not necessarily due to climate change.

Instead, it may simply reflect the natural growth and decay cycle of an ice shelf.