Abu Dhabi turns on the ‘world’s biggest’ single site solar plant made from 3.2MILLION panels that will supply 90,000 people with electricity

Abu Dhabi has turned on the world’s largest single solar plant that will eventually provide green energy for 90,000 people.

Once fully operational the Noor Abu Dhabi, which has 3.2million solar panels, will reduce emissions by around one million metric tonnes of CO2 – the equivalent of taking 200,000 cars off the road.

The 3.1 square mile (8 square kilometre) project in Sweihan is the biggest single plant in the world.

Some solar parks are larger, but are run by multiple businesses who use shared infrastructure and work separately. 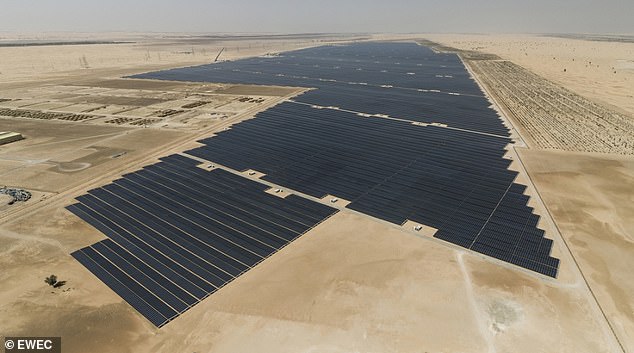 Abu Dhabi has turned on the world’s largest single solar plant (pictured) that will eventually provide green energy for 90,000 people

WHERE ARE THE WORLD’S LARGEST SOLAR FARMS?

The UAE spent £700million (3.2billion AED) on the project which is part of the emirate’s energy strategy to increase the percentage of clean energy from 25 per cent to 50 per cent by 2050.

Currently, the UAE has the 29th highest carbon dioxide emissions based on their fossil fuel emissions.

The country is heavily reliant on its oil reserves, which are the seventh largest in the world.

Japan’s Marubeni Corporation, the Emirates Water and Electricity Company (EWEC), and JinkoSolar worked together on the project.

Mohammad Hassan Al Suwaidi, Chairman of EWEC said: ‘The completion of the project marks a significant milestone in the UAE’s Energy Strategy 2050, launched in 2017, to increase the contribution of clean energy in the total energy mix from 25 per cent to 50 per cent by 2050 while reducing the carbon footprint of power generation by 70 per cent.

‘This is in line with the sectors transformation strategy by providing alternative sources of energy that can help us improve the sustainability of the water and electricity sector.’

Other green initiatives the country is trying include a waste-to-energy conversion plant in Al Warsan, Dubai. 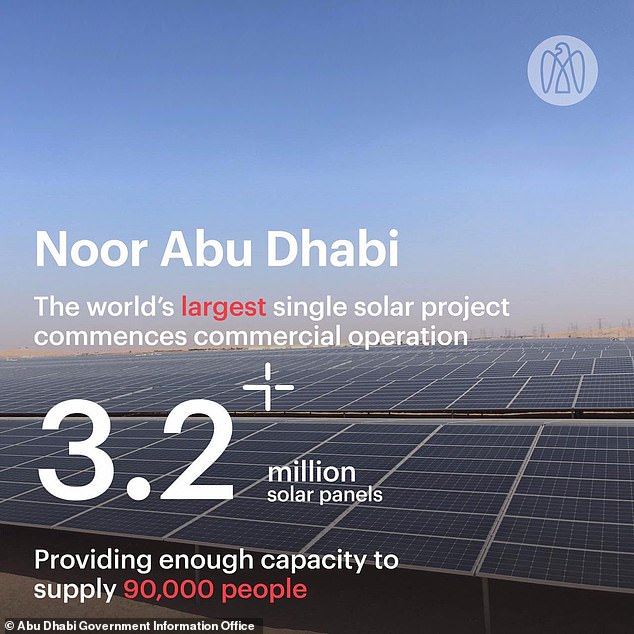 Currently, the UAE have the 29th highest carbon dioxide emissions based on their fossil fuel emissions

WHAT IS SOLAR POWER?

Solar power is the conversion of energy from sunlight into electricity.

Photovoltaics — the kind of solar panel you might see built into a calculator — are capable of directly converting light into electrical power.

In concentrated solar power systems, however, mirrors or lenses are first used to collect the sunlight that falls on a large area and focus it — creating heat that can be used to drive a steam turbine and generate electricity.

Optimum locations for solar farms include the arid tropics and subtropics, with deserts lying at such low latitudes often being cloudless and getting around 10 hours of sunlight each day.

According to NASA, the eastern part of the Sahara — the Libyan Desert — is the sunniest place on the Earth.

Solar power accounted for 1.7 per cent of the world’s electricity production in 2017, and has been growing at a rate of 35 per cent each year.