Men who abuse steroids can be left with low sex drive, poor erections and a low sperm count for YEARS afterwards, study warns

Researchers in Copenhagen, Denmark, tracked a biomarker of testicular function in the blood of current and former anabolic steroid users.

Anabolic steroids are synthetic drugs that mimic the effects of the male hormone testosterone, and their abuse is prevalent among athletes worldwide.

The biomarker is produced by cells in the testes that also produce testosterone, indicating anabolic steroids ‘persistently impair their capacity’. 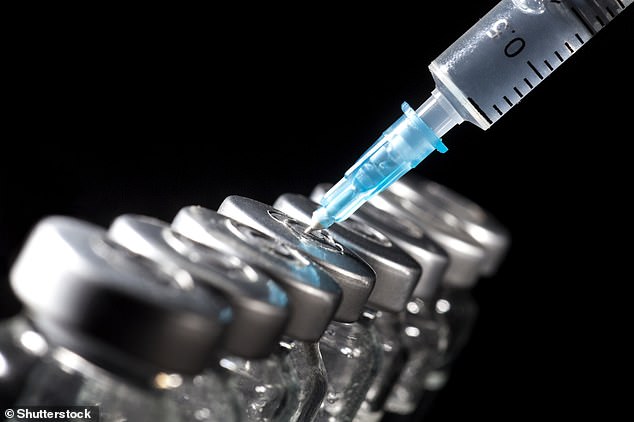 Some anabolic steroids are taken orally, while others are injected into the muscle or provided in gels or creams. They can harm of men’s testicular function years after they stop abusing steroids, experts warn

People of all ages have been known to misuse anabolic steroids, including adolescent boys who suffer from body dysmorphic disorder.

This is a mental health condition where a person spends a lot of time worrying about flaws in their appearance.

But these flaws are often unnoticeable to others.

Boys and men who have body dysmorphic disorder may take anabolic steroids because they don’t see themselves as being physically big enough or strong enough.

Some anabolic steroids are taken orally, while others are injected into the muscle or provided in gels or creams.

Some people use anabolic steroids without a prescription to improve athletic performance or get a more muscular look.

In professional sport, most organisations ban anabolic steroid use and test competitors for traces of anabolic and other steroids.

Hypogonadism can cause decreased sex drive, poor erections and a low sperm count.

Anabolic steroids are also class C drugs, which can only be sold by pharmacists with a prescription.

The NHS warns: ‘It’s illegal to possess, import or export anabolic steroids if it’s believed you’re supplying or selling them. This includes giving them to friends.’ 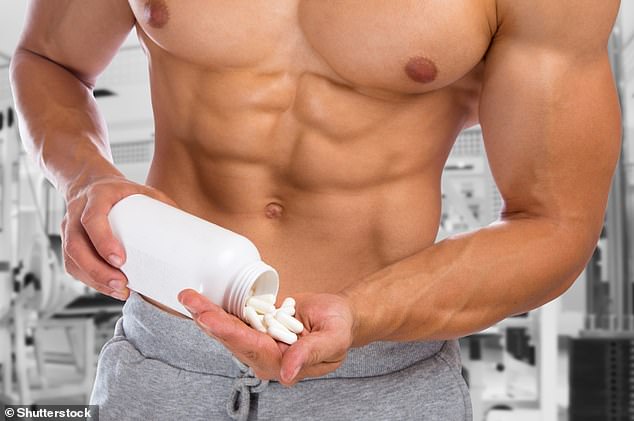 Some anabolic steroids are taken orally, while others are injected into the muscle or provided in gels or creams

For their study, the researchers investigated the effect of anabolic steroids on testicular function using a new biological marker, called insulin-like factor 3 (INSL3).

INSL3 is a promising biological marker of testicular function – and may even be a more stable marker than testosterone.

This is because levels of testosterone in the blood can vary greatly during the day and vary by body composition.

For their study, the team recruited 132 men who did some form of recreational strength training. Their ages ranged from 18 to 50 years and averaged 32 years.

INSL3 was measured from the serum – the clear, pale-yellow liquid that separates from the clot in the coagulation of blood. 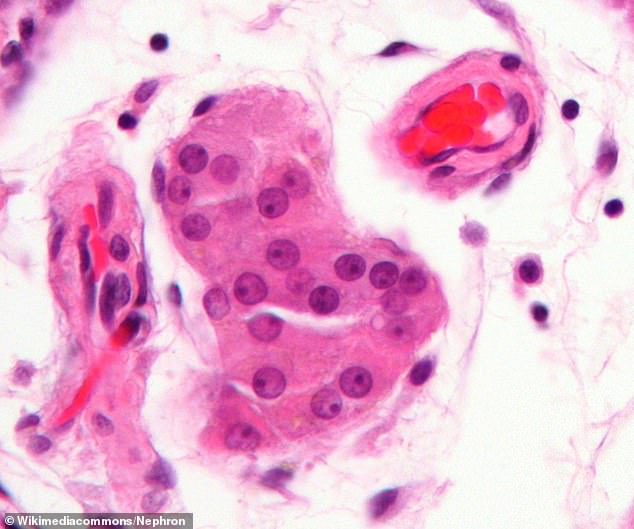 Very high magnification micrograph of Leydig cells, which produce testosterone in the testes

Current users had on average 0.04 microgram of INSL3 per litre in the blood.

The longer the duration that the men reportedly used steroids, the lower their INSL3 levels, the researchers found.

The clinically relevant difference in INSL3 levels is not yet known, but the findings indicate prior steroid users may have an increased risk of hypogonadism later in life.

‘The results raise the question whether some previous anabolic steroid users should receive medical stimulation therapy to increase Leydig cell capacity in the testicles,’ said Rasmussen.

This therapy would include drugs used to block estrogen production or its conversion to testosterone, such as aromatase inhibitors and selective estrogen receptor modulators, he noted.

The study has been published in the Endocrine Society’s Journal of Clinical Endocrinology & Metabolism.

Anabolic steroids have also been found to have other negative physiological effects – in 2017, US health professionals said their long-term use may weaken the functioning of the heart.

They had tracked 140 male weight-lifters – 86 of whom had used anabolic steroids and 54 had not. Of the steroid users, 28 had stopped using before the assessments.

Using ultrasound scans, the researchers found that that the hearts of the anabolic steroid users were weaker.

The current steroid users had lower heart-pumping capacity than those who had stopped using them, they found.

‘Compared to non-users, anabolic steroid users displayed both higher systolic and diastolic blood pressure, as well as a higher prevalence of levels of bad (LDL) cholesterol in their blood,’ study co-lead author Dr Aaron Baggish at Massachusetts General Hospital in Boston said at the time.

Anabolic steroids are class C drugs, which can only be sold by pharmacists with a prescription.

It’s not illegal to possess anabolic steroids for personal use.

They can also be imported or exported, as long as this is carried out in person.

This means they can’t be posted or delivered by a courier or freight service.

However, it’s illegal to possess, import or export anabolic steroids if it’s believed you’re supplying or selling them.

This includes giving them to friends. The penalty is an unlimited fine, or even a prison sentence.

In professional sport, most organisations ban anabolic steroid use and test competitors for banned steroids.