Home » Science » Antibodies from LLAMAS can neutralise the coronavirus

Antibodies taken from the blood of llamas and engineered to target SARS-CoV-2, the virus which causes Covid-19, could offer a future treatment against the disease.

Llamas, as well as camels and alpacas, naturally produce very small antibodies, called nanobodies, which are dwarfed by those made by human immune systems.

Lab-based experiments found these naturally-occurring antibodies can be tailored to neutralise the coronavirus causing the ongoing pandemic.

The research is still in a very early stage and has seen a rapid turnaround, with academics at the Rosalind Franklin Institute at Oxford University condensing a process which would normally take almost a year into just 12 weeks.

However, the researchers believe the llama-derived nanobodies could eventually be developed as a treatment for humans struck down with a severe case of Covid-19. 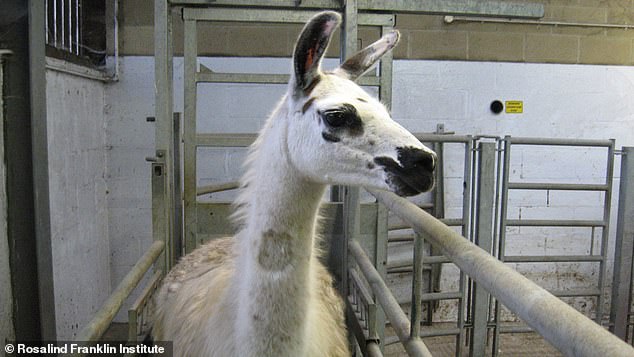 Scientists took nanobodies from a llama called Fifi (pictured) at the University of Reading and tweaked them in a lab to target the interaction between the virus’s spikes, which are coated in sugars known as glycans, and the ACE2 receptor 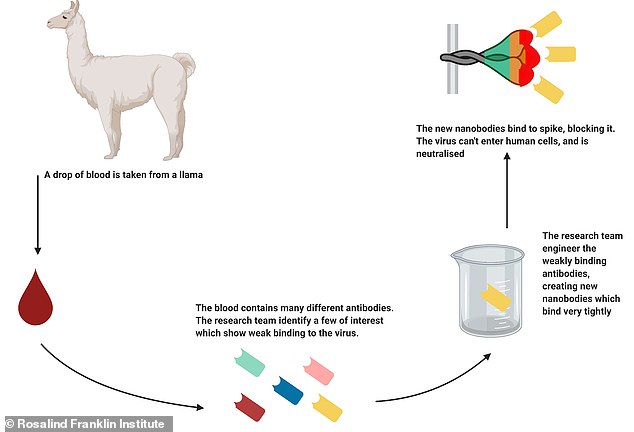 Pictured, a diagram showing how scientists turned tiny antibodies from a llama, called nanobodies, into  potential Covid-19 treatment in a lab

Professor James Naismith, Director of The Rosalind Franklin Institute and Professor of Structural Biology at Oxford University, who authored the study, said: ‘These nanobodies have the potential to be used in a similar way to convalescent serum, effectively stopping progression of the virus in patients who are ill.

‘We were able to combine one of the nanobodies with a human antibody and show the combination was even more powerful than either alone.

‘Combinations are particularly useful since the virus has to change multiple things at the same time to escape; this is very hard for the virus to do.

‘The nanobodies also have potential as a powerful diagnostic.’

SARS-CoV-2 invades human cells by latching on to a receptor on the surface of human cells, called ACE2.

ACE2 has been called the ‘entry key’ to the human body and the coronavirus has a spike which is a perfect fit, allowing it to infect humans.

Human antibodies, like those of most mammals, including humans, have two chains (heavy and light).

However, camelids, such as llamas, also create a much smaller form with only a single heavy chain.

This variant is much smaller in size and is known as a nanobody.

Nanobodies are still antibodies, but are smaller, more stable and easily produced.

They can be manipulated easily in a lab and can serve as alternatives to conventional antibodies for diagnostics and imaging.

Antibodies are produced by the immune system and are made from ‘memory’.

When a virus infects a person which has previously caused illness, the immune system rapidly churns out the protective antibodies to neutralise the infection.

They can only be created if the body is exposed to the virus by getting infected for real, or through a vaccine or other type of specialist immune therapy.

They can work in a variety of ways, wither by targeting the virus itself or the location on a human cell to which it binds and infiltrates.

Knowing you are immune to a virus – although whether people actually develop immunity to Covid-19 is still unknown – can affect how you act in the future.

Someone may need to protect themselves less if they know they have been infected, for example, or medical staff may be able to return to work in the knowledge they are not at risk.

These spikes also help SARS-CoV-2 to disguise its viral proteins and therefore is essential in allowing the virus to evade the body’s immune system, earning it the description of ‘a wolf in sheep’s clothing’.

The Oxford-based experts focused on preventing the coronavirus from being able to bind to ACE2 by physically blocking it.

Scientists took nanobodies from the blood of a llama called Fifi at the University of Reading and tweaked them in a lab to target the interaction between the virus’s spikes, which are coated in sugars known as glycans, and the ACE2 receptor.

They successfully produced two nanobodies, called H11-H4 and H11-D4, which are very similar in shape and structure to one another.

Both nanobodies were shown to neutralise live SARS-CoV-2, with H11-H4 showing particularly high potency, by latching on to three distinct locations on the virus’s spike.

These nanobodies securely attached to the viral spike and inhibit the binding between the virus’s spike and its target human cell.

The researcher were able to know how effective the virus was by using advanced imaging with X-rays and electrons, providing a detailed look at the interaction between virus and cells.

It showed the nanobodies bind to the spike protein in a new and different way to other antibodies already discovered.

Professor David Stuart, from Diamond Light Source and Oxford University said: ‘The electron microscopy structures showed us that the nanobodies can bind to the virus spike, essentially covering up the portions that the virus uses to enter human cells.’

The findings, although early, have already been scrutinised by other academics via peer-review and published in Nature Structural & Molecular Biology.

Professor Ray Owens from Oxford University, who leads the nanobody program at the Franklin, said: ‘We are hopeful that we can push this breakthrough on into pre-clinical trials.’

The researchers say the nanobodies could offer hope as a treatment.

Writing in the study, the authors say: ‘The H11-H4 and H11-D4 nanobodies may find application in a cocktail of laboratory-synthesised neutralising antibodies given for passive immunisation of severely ill COVID-19 patients.’

Covid-19 currently has no cure, with only a handful of drugs showing hope as a potential treatment.

However, critically ill patients are showing improved recovery when given serum from convalesced individuals, which contain human antibodies against the virus.

This process is known as passive immunisation and has been used for over 100 year.

But drilling down to find out what exact antibodies are helping treat people is very difficult.

A lab-based product which can be made on demand would have considerable advantages and could be used earlier in the disease where it is likely to be more effective, the researchers say.