Apple may be cutting the cord on charging by going completely wireless in 2021, analyst says

Apple may finally be killing off its Lightning cables to make way for wireless-only charging.

Top analyst with TF Securities, Ming-Chi Kuo, foreshadowed the move by Apple in a note this week, projecting that the tech giant may shift gears to wireless charging by 2021.

If true, the move would materialize rumors that date back several years, projecting that Apple would switch away from its proprietary Lighting port to the more common USB-C. 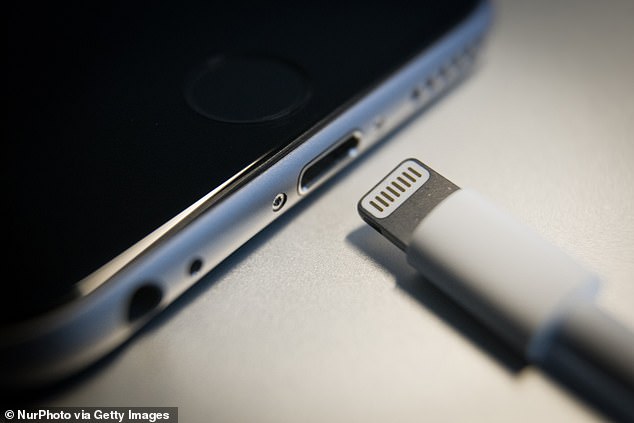 Apple may finally drop its Lightning cable (pictured above) in favor of wireless charging by 2021 according to top Apple analyst Ming-Chi Kuo. Stock image

Though Apple has started to transition some of its devices to USB-C, it decided to retain the Lighting connection on its most recent round of iPhone 11 devices.

A fast charger designed for the device uses USB-C but must be connected using an adapter that hooks up to a Lightning connection.

By doing away with the Lightning connection, Kuo says Apple may be able to boost sales by giving customers a ‘completely wireless experience.’

In addition to the pivot away from the Lightning connection, Kuo has made several predictions about apple’s imminent plans in 2020.

The analyst expects 2020 to usher in a more budget-friendly iPhone SE, aptly dubbed the SE 2.

He said the next iteration Apple’s iPhone SE will cost $399 and come in three distinct colors.

Kuo predicts the iPhone SE 2 will also be available with two storage tiers, a 64 GB version and a 128 GB version, and feature colors like space gray, silver, and product red.

The device will reportedly be similar to the design of the iPhone 8 but will come with Apple’s newest processor, the A13 Bionic – the same chip included in both new iPhone 11’s – despite having 1GB less RAM than Apple’s premium models.

Kuo says the phones will likely be positioned as a way to entice iPhone owners still using the company’s older models, particularly the iPhone 6 and 6s, who cannot afford the company’s $700 iPhone 11.