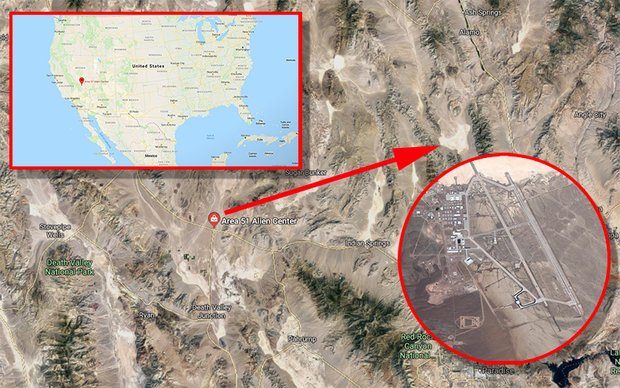 Air Force spokeswoman Laura McAndrews warned anyone hoping to break in and “see them aliens” that the base “is an open training range for the US Air Force, and we would discourage anyone from trying to come into the area where we train American armed forces”.

“The US Air Force always stands ready to protect America and its assets.”

There is certainly ample evidence that the facility takes its security seriously.

Adventure Photo Tours, a tour operator based in nearby Las Vegas, Nevada, runs sightseeing excursions in the region.

One of the company owners, Will Tryon, says he was momentarily distracted on one trip in 2014 and inadvertently drove a group of tourists past one of the numerous signs marking the edge of the Groom Lake facility.

Within seconds, he says, a detachment of armed security staff wearing camouflage gear appeared and ordered Tryon to stop the vehicle. All the occupants were ordered out at gunpoint and told to wait until local police could come and issue a spot fine.

Adventure Photo Tours vehicles have also been buzzed by low-flying aircraft and ‘lit up’ with targeting lasers.

The Times reports that Nevada’s Area 51-themed Little A’Le’Inn hotel his booked solid for 20 September, with many guests mentioning the Facebook event while making reservations.

The nearby Alien Cathouse, a legal brothel a short distance from the tourist centre, is also expected to be particularly busy that weekend.

For many, the Storm Area 51 project is an elaborate joke. But for the few that end up trying to break into the facility, its consequences could be deadly serious.