Beavers, bottle feeders and a gender-neutral Santa Claus are among the new emojis set for release in Apple iOS 14.2 next month

A beaver, a set of bottle feeders and a gender-inclusive Santa Claus are among the new emojis to be unleashed with Apple iOS 14.2 next month, it has been revealed.

While some of the new additions were teased back in July, yesterday’s release of iOS 14.2 beta 2 to developers has unveiled more of the upcoming options.

These include a comically disguised face, a ‘happy crying’ emoji, a boulder, a sink plunger and gender options for the tuxedo and wedding dress-with-veil emojis. 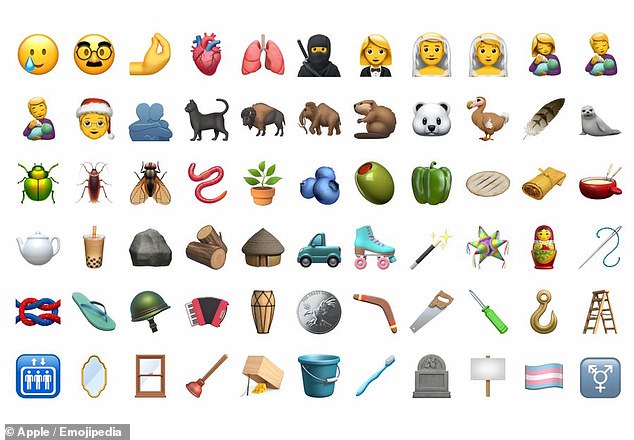 A beaver, a set of bottle feeders and a gender-inclusive Santa Claus are among the 100 new emojis — pictured — to be unleashed with Apple iOS 14.2 next month, it has been revealed

The working list of emoji are determined by the California-based Unicode Consortium.

Third parties can make applications in support of new emoji.

Candidates must work well at emoji sizes, convey new meaning and must appear to be in demand.

Patterns of existing emoji usage are used to help guide the uptake of new additions to the Unicode Standard.

In total, 100 new additions to the iOS emoji library will be installed when iOS 14.2 is rolled out to Apple’s customer base, likely sometime in October.

Additions will include a transgender symbol, bubble tea, pinched fingers, a boomerang, a dodo, a beaver, a piñata, nesting dolls, a coin, an anatomical heart, lungs, a ninja and a tamale.

Unlike their competition, Apple has largely stuck to its style of hyper-realism for the new emoji — as opposed to the more cartoon-esque illustrations of other software developers.

The update will also roll out new skin tone variations as well as the gender-inclusive emoji variants.

Not only will the additions feature on iPhone and iPad devices, but they will also be available on watchOS, an Apple spokesperson said.

The new emoji have also been spotted in the latest developer releases of macOS Big Sur beta — and are also expected to see a general launch with macOS 11 Big Sur next month.

Last week, the Unicode Consortium announced the release of Emoji version 13.1, which will include such additions as the ‘face with spiral eyes’ — to reflect the chaos of this year — ‘burning heart’, assorted new skin tones and ‘couples with hearts’.

However, these new emoji will not appear as part of next month’s iOS update.

Instead, these version 13.1 icons will likely not be rolled out until late 2021. 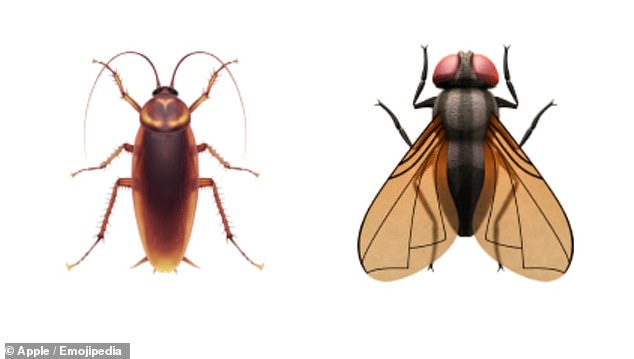 In total, 100 new additions to the iOS emoji library will be installed when iOS 14.2 is rolled out to Apple’s customer base. Pictured, Apple’s highly realistic cockroach and fly emjoi

ARE EMOJIS RUINING THE ENGLISH LANGUAGE?

Emojis may be a fun form of communication but they are destroying the English language, a recent study by Google has revealed.

Smiley faces, love hearts, thumbs up and other cartoon icons – rather than words – are the preferred method of communication by teenagers, who are considered the worst offenders regarding the decline in grammar and punctuation.

More than a third of British adults believe emojis are the reason for the deterioration in proper language usage, according to the study commissioned by the Google-owned site YouTube.

Emojis were first used by Japanese mobile phone companies in the late 1990s to express an emotion, concept or message in a simple, graphic way. Now, Twitter feeds, text messages and Facebook posts are crammed with them

Of the two thousand adults, aged 16 to 65, who were asked their views, 94 per cent reckoned English was in a state of decline, with 80 per cent citing youngsters as the worst offenders.

The most common errors made by Brits are spelling mistakes (21 per cent), followed closely by apostrophe placement (16 per cent) and the misuse of a comma (16 per cent).

More than half of British adults are not confident with their command of spelling and grammar, the study also found.

Furthermore, around three-quarters of adults rely on emoji to communicate, in addition to a dependence on predictive text and spell checking.

The use of emojis has seeped into our culture to such an extent that the Oxford Dictionary’s ‘Word of the Year’ in 2015 wasn’t actually a word at all – it was the Face With Tears emoji, which shows just how influential the little graphic images have become.

They were first used by Japanese mobile phone companies in the late 1990s to express an emotion, concept or message in a simple, graphic way.