A primitive bee weighed down by parasitic beetle larvae met its demise after getting stuck in tree sap 100 million years ago.

The moment of death has been immortalised for millennia as the sap overwhelmed the insect, killed it, and eventually hardened into amber.

It was found in Myanmar and is the earliest evidence of a primitive bee with pollen in the fossil record.

It is also the first record of the beetle parasites, which are still plaguing bees to this day. 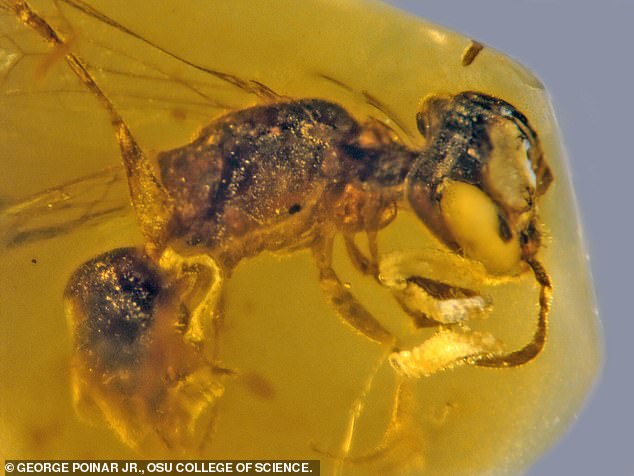 A primitive bee weighed down by beetle parasites on its back met its demise after getting stuck in tree sap 100 million years ago. The moment of death has been immortalised for millennia

Amber has been used in jewelry for thousands of years, and is often found to hold remarkably well-preserved materials from eras long since passed.

The golden-coloured translucent substance is formed when resin from extinct coniferous trees became hardened and then fossilised.

Often insects, plant material, pollen and other creatures became trapped in the resin, causing them to be entombed within after it solidified.

‘Additional evidence that the fossil bee had visited flowers are the 21 beetle triungulins – larvae – in the same piece of amber that were hitching a ride back to the bee’s nest to dine on bee larvae and their provisions, food left by the female,’ Professor George Poinar Jr from Oregon State University said.

‘It is certainly possible that the large number of triungulins caused the bee to accidentally fly into the resin.’

Bees are crucial pollinators that feast on pollen, but they descend from apoid wasps, a carnivore.

But little is known about how the animals transitioned to a pollen-based diet and what the intermediary animals looked like.

Professor Poinar studied the female bee from the mid-Cretaceous fossil and found it to be from a totally unique family, genus and species.

It shares some trait with wasps, and some with modern bees, making it important to understanding the evolution of modern invertebrates.

Its plumose hairs, a rounded pronotal lobe and a pair of spurs on the hind leg are similar to bees.

But its low-placed antennal sockets and certain wing-vein features are similar to the wasps.

‘Something unique about the new family that’s not found on any extant or extinct lineage of apoid wasps or bees is a bifurcated scape,’ Professor Poinar said.

‘The fossil record of bees is pretty vast, but most are from the last 65 million years and look a lot like modern bees.

‘Fossils like the one in this study can tell us about the changes certain wasp lineages underwent as they became palynivores – pollen eaters.’