Britain loses its longest-lasting patch of snow: 13ft strip in the Cairngorms dubbed The Sphinx melts for the eighth time since records began in the 1700s due to warm weather

The longest-lasting patch of snow in Britain has melted for just the eighth time in the past 300 years, according to experts monitoring the Cairgnorm phenomenon.

Known as ‘The Sphinx’, the 13ft strip is the ‘most durable patch of snow’ in Britain, but the rate of melting appears to be increasing – four times in the past five years.

Found at Braeriach, in the Cairngorms, there are fears it could become a victim of climate change, with warmer summers, wetter autumn and colder winters, causing it to get smaller, says mountaineer and author Iain Cameron.

It lasted most of 300 years without melting in the summer, but in four of the last five years it has disappeared by the start of autumn, experts explained.

It shrunk to the size of an A4 piece of paper in the past few weeks, before finally disappearing in milder weather earlier this week. 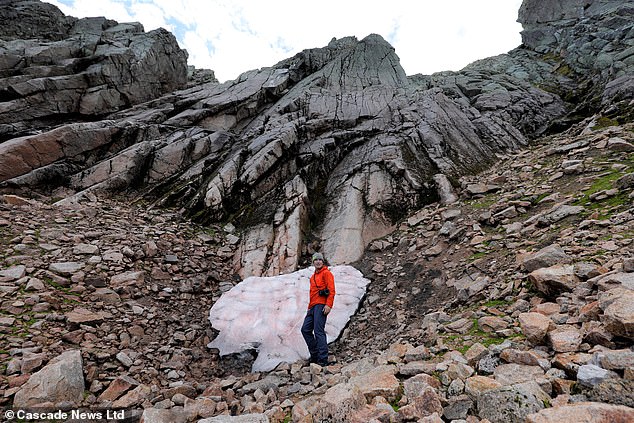 The so-called Sphinx, at Braeriach, in the Cairngorms, has survived virtually every summer since records began in the 1700s. This was taken in October 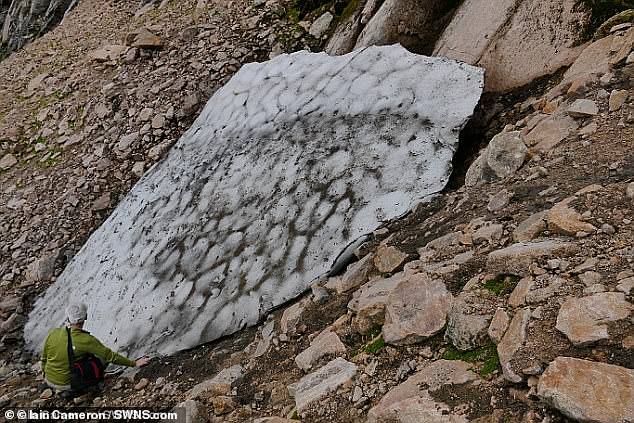 Known as The Sphinx, the 13ft strip of snow at Braeriach, in the Cairngorms (pictured in October), is known to have survived virtually every summer since records began

WHAT IS A LASTING SNOW PATCH?

A snow patch, such as The Sphinx in the Cairngorns, is a lasting strip of snow that survives the summer.

They are often at a higher altitude, with overhanging rocks to reduce sunlight.

Int he case of the Sphinx, it has only melted in the summer seven times in 300 years, re-freezing the next winter.

They have been actively studied for more than 100 years, but records of their extent started in the 1700s.

Recent years have seen the extent of these patches decline, and seen them melt more frequently.

There is concern they will disappear completely as the world warms up.

Scotland has a number of hardy snow patches, but they melt frequently throughout the summer, returning with increased snowfall in the winter.

There are no lasting glaciers in the country, but these snow patches can last throughout the summer, clinging on until the first flurries of winter.

Most of these are on Ben Nevis, the highest mountain in Scotland, with others in the Cairngorms, a mountain range in the eastern Highlands.

Experts are worried that its permanent demise may be imminent for all of the snow patches, including the iconic Sphinx.

Mr Cameron is Scotland’s leading snow patch expert, having studied them for decades, and written a book on their history.

He pointed out that four of its disappearances have been within the last 20 years.

‘It was thought never to melt, or at least very infrequently,’ he said, ‘but this will be the third time in five years, which is unprecedented.’

‘I’m not a climatologist but I think it’s a safe assumption to say that rising temperatures are what is ultimately behind this,’ the author added.

Mr Cameron explained that it’s the closest thing Scotland has to a glacier and, as a result, is the most closely-studied patch of snow in the British Isles.

It can be found along the lip of the ridge of Braeriach, which is the UK’s third-highest mountain, sitting in a very isolated part of the Cairngorms.

It lies in a hollow under the mountain’s ridge, meaning it gets very little sunlight, which allows it to stay frozen, even in the heat of summer.

‘There is a lot of snow there over winter and spring, so as a result there are huge build-ups of snow on the hills which take a long time to melt,’ Mr Cameron said.

The Sphinx has been studied seriously for about 100 years and especially closely since about the 1980s. 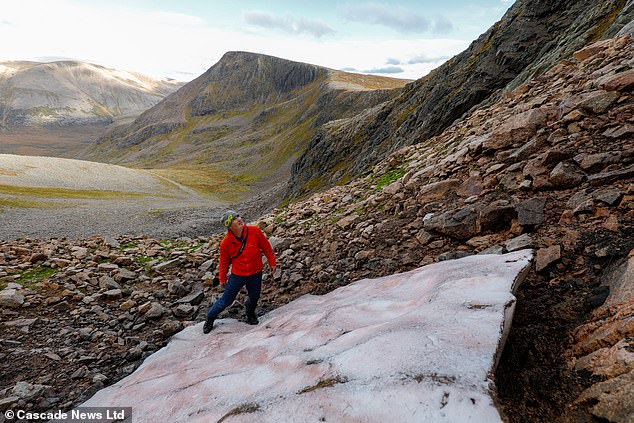 It can be found along the lip of the ridge of Braeriach, which is the UK’s third-highest mountain, sitting in a very isolated part of the Cairngorms. Pictured last month 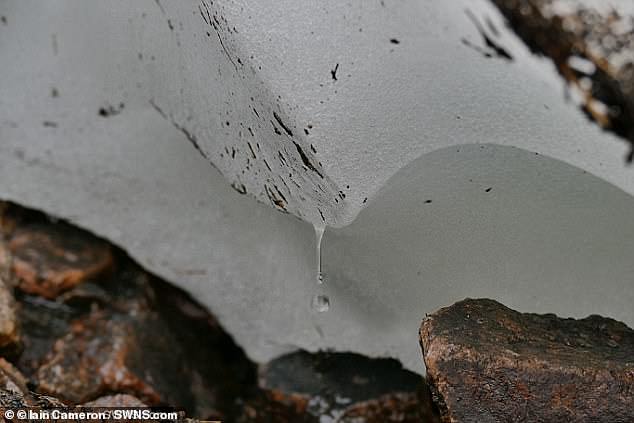 It lies in a hollow under the mountain’s ridge, meaning it gets very little sunlight, which allows it to stay frozen, even in the heat of summer. Pictured last month

The snow of recent years has melted to expose harder, older layers which are now melting too, prompting Mr Cameron to say it now ‘looks inconsequential.’

However, despite the way it looks today, what is left ‘can tell us a lot more than we might first think,’ he explained.

‘Snow patches like this act as a barometer for what the wider climate is doing and I think that’s borne out by the evidence we are seeing.

‘Just the minimal amount of patches are surviving these days compared to how they used to. The amount of snow that falls in winter seems to be less and less, so as far as I’m concerned there’s definitely a trend taking place there.’ 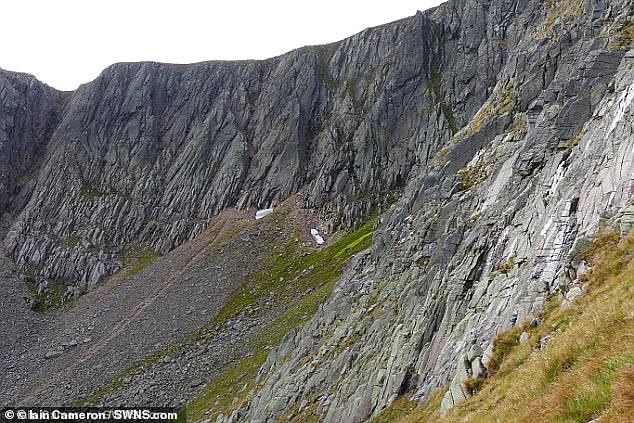 The snow of recent years has melted to expose harder, older layers which are now melting too, prompting Mr Cameron to say it now ‘looks inconsequential’. Pictured in October, it has since disappeared 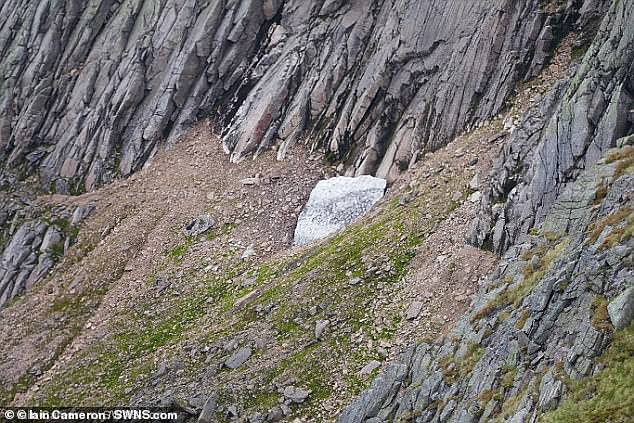 Each year Mr Cameron writes a paper for the Royal Meteorological Society regarding the condition of snow patches across Scotland.

‘I’m not a climatologist or even an academic, but it’s one of these strange things that when you do the research you become curiously attached to,’ he said.

‘Of course from a pragmatic point of view it doesn’t really matter at all if they melt, but from a philosophical and scientific perspective they do matter.

‘These things can tell us what is happening in the wider climate and we would be wise to pay heed to what these snow patches are telling us.

‘They are small in size but their size belies their importance.’

Scorching summers of 104°F (40°C) will become the UK’s new ‘normal’ by the end of the century, forecasters from the Met Office have warned.

The alarming prediction comes as experts warned that temperature and rainfall records are being smashed at a ‘shocking’ rate in Britain.

All of the UK’s top ten warmest years on record since 1884 have occurred in the last two decades, with central England now warmer than in the last three centuries.

Furthermore, the last three decades have been 1.6°F (0.9°C) warmer than the three decades that preceded them. Warming trends are evident across the while UK.

The researchers have expressed fear that the rate of global warming is spiralling out of control, saying that ‘climate change is happening and it’s happening now’.

Alongside the trend towards increasing temperatures, the UK has been on average around 6 per cent wetter over the last 30 years than in the three decades before that, with six of the ten wettest years on record occurring since 1998.

The UK’s wettest February on record struck in 2020, during which the country was battered by storms Ciara and Dennis in rapid succession, bringing devastating flooding to many homes and businesses.

In fact, most of the UK received more than twice the usual long-term average rainfall that month, with increases as high as 400 per cent seen in the Pennines and 300 per cent across broad swathes of the north and west.