Brown algae removes 550 MILLION tonnes of carbon dioxide from the air annually and stores it in slime for up to thousands of years, study finds

Brown algae removes 550 million tonnes of carbon dioxide from the atmosphere annually and stores it in its slime for up to thousands of years, a study has found.

While it primarily uses the carbon to grow, the seaweed turns some of it into algal mucus and deposits this in the seawater.

Researchers from the Max Planck Institute for Marine Microbiology in Germany analysed the composition of this mucus in detail.

They found that about 50 per cent of it was made up of the molecule ‘fucoidan’, which contains carbon and is difficult to break down. 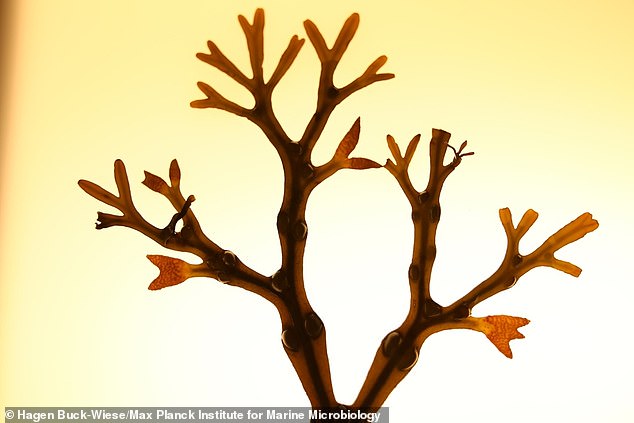 They found that about 50 per cent of the algal mucus was made up of the molecule ‘fucoidan’, which contains carbon and is difficult to break down

Therefore, this compound is left untouched in the ocean ‘for hundreds to thousands of years’, said first author Dr Hagen Buck-Wiese.

The researchers think that the seaweed is thus helping to counteract global warming, as the carbon is locked away in the mucus for the long term.

Brown algae is thought to out-compete forests in the amount of carbon it absorbs from the air each year, but only uses about two thirds of it for growth and energy.

The rest is discarded in the form of sugary excretions, some of which is used by other organisms, while the rest sinks to the seabed. 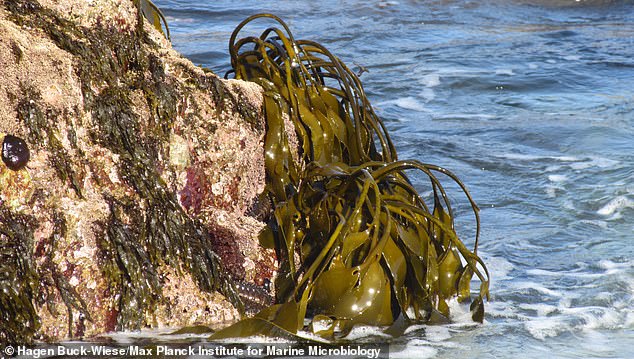 Fucus vesiculosus, or ‘blad­derwrack’, is a type of brown algae present in the North Sea, Baltic Sea and North Atlantic which grows up to 12 inches (30cm) long and sticks to rocks

WHAT IS BROWN ALGAE?

Brown algae typically lives in temperate and cold marine regions, and there are up to 2,000 different species of it.

These include kelp, which forms metre-high forests under the sea, and blad­derwrack, which was examined for the study.

It has a variety of different uses, both in food and medicine. Bladderwrack, for example, was the original source of iodine, discovered in 1811.

Brown algae typically lives in temperate and cold marine regions, and there are up to 2,000 different species of it.

For the study, published this month in Proceedings of the National Academy of Sciences, scientists studied the algal mucus of Fucus vesiculosus, or ‘blad­derwrack’ in Finland.

This is a type of brown algae present in  the North Sea, Baltic Sea and North Atlantic which grows up to 12 inches (30 cm) long and sticks to rocks and stones.

It is named after the air pockets on its leaves, which look like small bladders and provide buoyancy in water.

‘However, we have managed to develop a method to analyse them in detail.’

His team found that fucoidan is largely responsible for its carbon removing properties, and makes up about half of its mucus.

‘The fucoidan is so complex that it is very hard for other organisms to use it. No one seems to like it,’ Dr Buck-Wiese added.

‘This makes the brown algae particularly good helpers in removing carbon dioxide from the atmosphere in the long term – for hundreds to thousands of years.’ 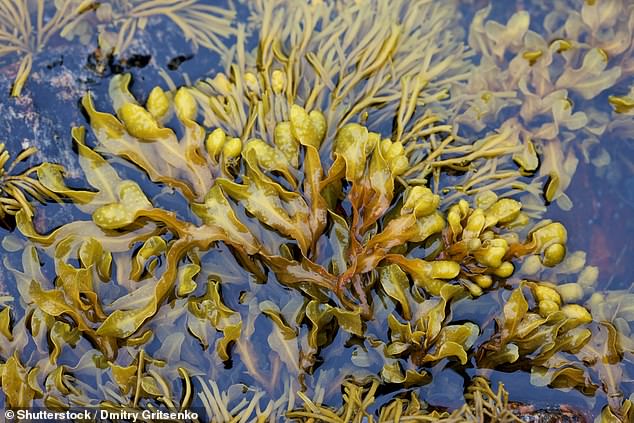 Bladderwrack is named after the air pockets on its leaves, which look like small bladders and provide buoyancy in water (stock image)

As it is estimated that brown algae absorbs a billion tons of carbon each year, this means that up to 150 million tonnes of it is stored as robust fucoidan in the mucus.

This is the equivalent of 550 million tonnes of carbon dioxide, exceeding the 505 million tonnes produced by the UK annually according to the Office for National Statistics.

The loss of fucoidan in the mucus also does not impact the growth of the blad­der­wrack, as it does not contain any useful nutrients like nitrogen.

Dr Buck-Wiese said: ‘Next we want to look into other brown algae species and other locations.

‘The great potential of brown algae for climate protection definitely needs to be further researched and utilised.’

Scientists develop biodegradable flip flops made from algae to help reduce the amount of plastic waste that ends up on seashores and in the oceans.

Plus, a brewery in Australia is feeding the carbon dioxide it produces to algae that transform it into oxygen to help fight climate change.

But, half of Earth’s coral reefs will be permanently damaged by 2035 if temperatures continue to rise.

Algae species has THREE different sexes including a ‘bisexual’ one

A species of freshwater algae collected from lakes in Japan has evolved to have three different sexes, all of which breed in pairs with each other.

The three sexes are male, female and bisexual, which researchers say is because the third sex can produce both male and female sex cells in a single genotype.

The team notes that this algae is different from a hermaphrodite because it developed its sex cells under a normal gene expression.

A hermaphroditic individual who can produce both the male and female sex cells usually exists due to unusual gene expression.

The Pleodornia starri (P. starrii) was discovered by the University of Tokyo and is the first case of algae or fungi to have three sexes.