And where’s MY drink? Not offering someone a beverage when going to get one for yourself is the most common cause of dinnertime arguments, survey reveals

If you get up from the table to grab yourself a drink over the festive period, don’t forget to offer one to the rest of the family.

That’s because a survey has revealed that this is the most common cause for dinnertime disputes in the UK, named by 32 per cent of 2,000 adults.

It also showed that the most argumentative Brits come from the capital, with Londoners having up to ten squabbles a week.

Their fights commonly focused on manners, noisy eating and who should do the washing up. 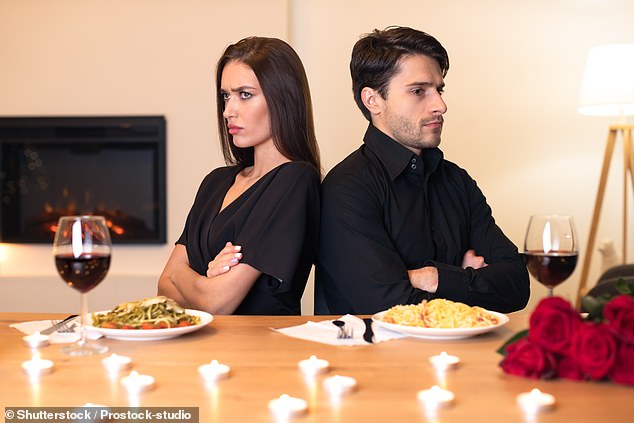 The most argumentative Brits come from the capital, with Londoners having up to ten dinnertime squabbles a week (stock image)

But those elsewhere in the south east came out as the least argumentative – having half as many disputes each week than Londoners.

The ones they do have are most likely to be about whether diners should be allowed to look at their phones.

While people in the north east have the most rows over getting everyone to sit down and eat at the dinner table.

Despite this, 59 per cent of adults believe little squabbles around the dinner table can actually bring them closer together.

And 61 per cent feel it would be boring if everyone in the family all had the same opinion.

A spokesperson for Birds Eye, which commissioned the study, said: ‘Dinnertime is a time for families to come together, particularly during the Christmas and New Year season.

‘However, as we all know, being together doesn’t always mean peace and harmony.

‘That said, it’s great to hear that when these dinnertime disputes do occur, over half of people feel they bring them closer together.’

Across the nation, the top reason for having more bust-ups over Christmas is simply that there are more members of the family around the table, all with different views (33 per cent).

The research also found residents in Scotland spend the most on food in a normal week – a total of £142.80 – compared to East Anglians who spend the least (£95.90).

Despite this, 47 per cent of all adults think the rising cost of living has made them more aware of food waste at mealtimes this Christmas.

Furthermore, the research reveals 95 per cent cook from frozen at least once a week, with a key reason for this being you don’t have to worry about food going off.

Other reasons include it being easier, you don’t need to plan days in advance and that the family prefer it. 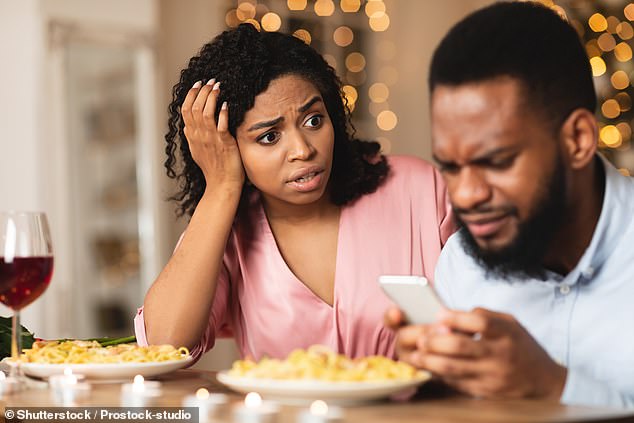 But those elsewhere in the south east came out as the least argumentative – having half as many disputes each week than Londoners. The ones they do have are most likely to be about whether diners should be allowed to look at their phones (stock image)

Seventy per cent of adults consider it important to eat together as a family, throughout the year.

More than half (57 per cent) think it improves their family bond, while 48 per cent of those who are parents claim it helps them understand their children’s lives.

A Birds Eye’s spokesperson added: ‘It’s a shame to see so many people still feel the pressure to have a ‘perfect’ Christmas.

‘And that little squabbles still happen during the festivities.

‘One thing that people seem to agree on is good food and our results show frozen food is a family favourite.

‘This Christmas – and throughout 2023 – we hope to see lots of families having dinnertime discussions about all sorts of subjects.’

Find out the environmental impact of your Christmas dinner, as a study reveals how the average festive meal consumes 70 per cent of your daily carbon budget.

Vets have revealed the Christmas foods that can be TOXIC for dogs – and what to do if they eat them.

And, could you cook Christmas dinner in an AIR FRYER? Graphic shows they deliver juicy results on a roast chicken and steamed vegetables.

A survey of more than 1,000 adults found that arguments erupted among one in four couples once or twice a week over online gaming.

About 12 percent said gaming-related fights happened as often as 150 to 200 times a year.

The most common sources of strife was how much one partner was playing Call of Duty or the popular FIFA soccer franchise, which were both responsible for over a third of fights.

However, one in 50 couples admitted to rows with their partner over gaming every single day, and some men have contemplating ending the relationship because of it.